London: Julian Assange has filed his next bid to appeal against his extradition to the United States.

If granted, Assange will seek to raise sensational media reports that the CIA plotted to kidnap and even kill the Australian during his time holed up in the Ecuadorian embassy. Assange spent seven years at the diplomatic residence in London to avoid being extradited to Sweden to face allegations of sexual assault and rape. 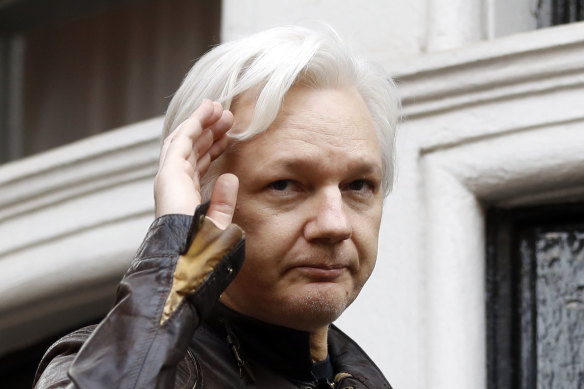 WikiLeaks founder Julian Assange greets supporters from a balcony of the Ecuadorian embassy in London back in 2017.Credit:AP

Assange’s Ecuadorian hosts ended up kicking out the Australian in April 2019, handing him over to Scotland Yard.

He has been incarcerated in British jails ever since, for skipping bail to avoid the Swedish extradition and as the United States requested his extradition to face charges relating to the WikiLeaks cables that he published more than a decade ago.

Assange’s extradition has been ordered by the British courts and in June was signed off on by Home Secretary Priti Patel.

Assange’s perfected grounds of appeal filed to the High Court of Justice Administrative Court name the US government and Patel as respondents.

The appeal will challenge the 2021 decision of District Judge Vanessa Baraitser who said that Assange could be extradited to the US but barred it on mental health grounds, agreeing that he could self-harm if sent to face trial.

The US government successfully appealed the bar by providing assurances about the prison conditions in which Assange would be kept while he awaits any trial.

But this next appeal by Assange will argue that he is being prosecuted for his political opinions, which, if accepted, would be in breach of the Extradition Act, which states that if it appears that an extradition is sought for the purpose of prosecuting or punishing a person on account of their political opinions then their extradition should barred.

Assange will also argue that Patel erred in signing off on his extradition claiming it breached section 4 of the US-UK extradition act which says extradition must not be sought by either side for political offences.

Assange is charged with violating the Espionage Act when he coached Chelsea Manning how to hack into databases to steal hundreds of thousands of cables which WikiLeaks published in full, after initially publishing selected contents of the cables in partnership with mainstream media outlets.

The appeal marks a shift in his legal defence which had relied more heavily on his physical and mental health.

This claim was originally accepted by Baraitser but overturned on appeal.

Since then, YahooNews! has reported allegations that the Trump Administration floated ways to extract Assange from the US embassy, with the view of kidnapping or even killing him.

“Since the last ruling, overwhelming evidence has emerged proving that the United States prosecution against my husband is a criminal abuse,” she said in a statement.

“The High Court judges will now decide whether Julian is given the opportunity to put the case against the United States before open court, and in full, at the appeal,” Stella Assange said.

Prime Minister Anthony Albanese has previously said he believes Assange should be freed but since winning the May election has declined to outline what entreaties he has made to US President Joe Biden, saying he would not do diplomacy via a “loud hailer”.