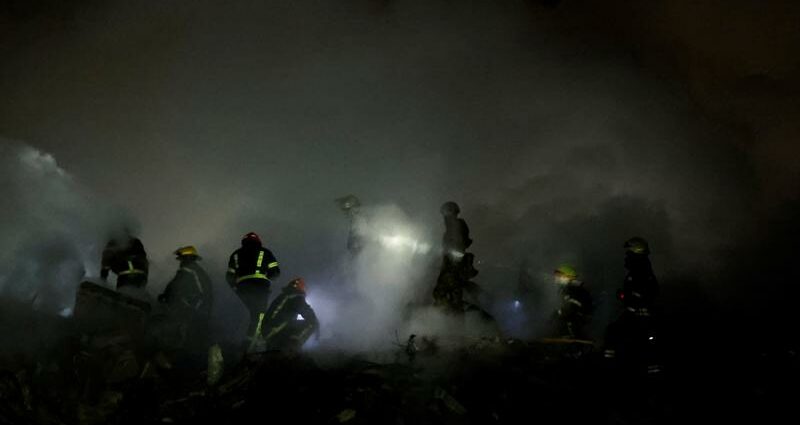 Emergency personnel work at the site where an apartment block was heavily damaged by a Russian missile strike, amid Russia’s attack on Ukraine, in Dnipro, Ukraine January 15, 2023. REUTERS/Clodagh Kilcoyne

(Reuters) – The death toll from a Russian missile attack that destroyed an apartment building in the Ukrainian city of Dnipro has risen to 14, while rescuers toiled through the night searching for survivors, the regional governor said early on Sunday.

“The search operation is ongoing,” Valentyn Reznichenko, governor of the Dnipropetrovsk region of east-central Ukraine, wrote at 2:50 a.m. (0050 GMT) on the Telegram messaging app.

Some 38 people had been rescued, about two dozen were missing and an unknown number of residents remained trapped under a massive pile of debris after the Saturday afternoon attack that injured at last 64, Reznichenko said.

The strikes hit critical infrastructure in Kyiv and other places, restricting power supply at the height of winter for the capital and large swaths of the country for the coming days, officials warned.

The strikes – Russia’s largest wave of attacks on Ukraine in two weeks – came as the country was observing the traditional New Year.

As ground fighting continued in Ukraine’s east, Britain followed France and Poland with promises of further weapons, saying it would send 14 of its Challenger 2 main battle tanks and artillery support. The moves add pressure on Germany to follow suit as Kyiv’s continues to plea for advanced military equipment.

British Prime Minister Rishi Sunak and his advisers have “analysed the military picture, looked at the strategic impact of the UK’s support and identified a window where he thinks the UK and its allies can have maximum impact,” a government spokesperson said in a statement.

Russia invaded Ukraine on Feb. 24 in what Moscow calls “a special military operation”, but which Ukraine and its allies say is an unprovoked aggression that has since killed thousands, displaced millions and turned much of cities such as Dnipro into rubble.