Torrential downpours and storms this weekend as Autumn begins TODAY 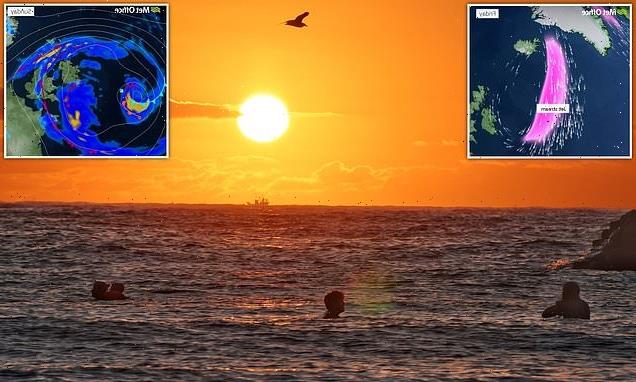 The rain returns: Torrential downpours, gales and thunderstorms set to batter the country over the weekend as Autumn begins TODAY

Britain has enjoyed the last of its summer sun as the beginning of September brings a week of torrential rain, gales and thunderstorms.

Today sees the beginning of autumn and a miserable start to the month as heavy rain and lightning is set to hit the UK over the next week.

Brits are flocking to the beaches to get the last of the heat, as the first two days of September look to remain warm with highs of up to 26C in the south of England.

However, temperatures are also set to plummet over the next week from the summery mid-twenties to the mid to high teens as stormy weather hits the UK.

The north of the country is set for highs of 18C this weekend, with heavy rain expected, while the south could see highs of 21C and less heavy but persistent rain. Temperatures will drop further from early next week. 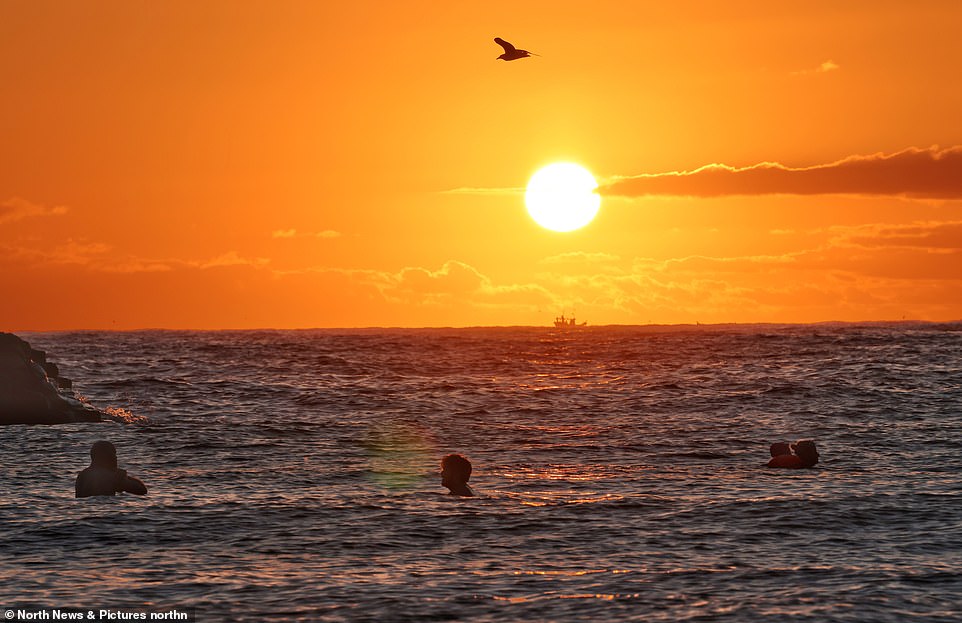 Brits soaked up the last of the summer sun this morning as the British summer draws to a close. Pictured: Swimmers in Cullercoats Bay in Tyneside 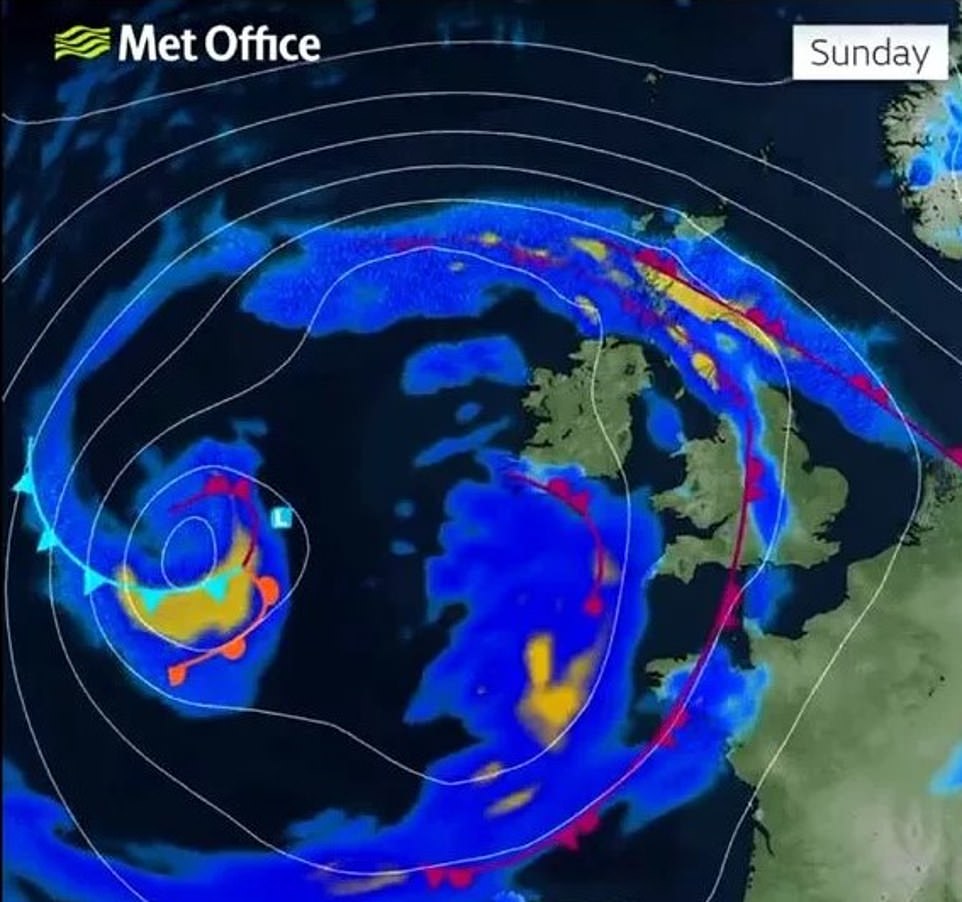 The Met Office said most of the country would be hit by bad weather and heavy rain, with the worst-affected areas likely to flood 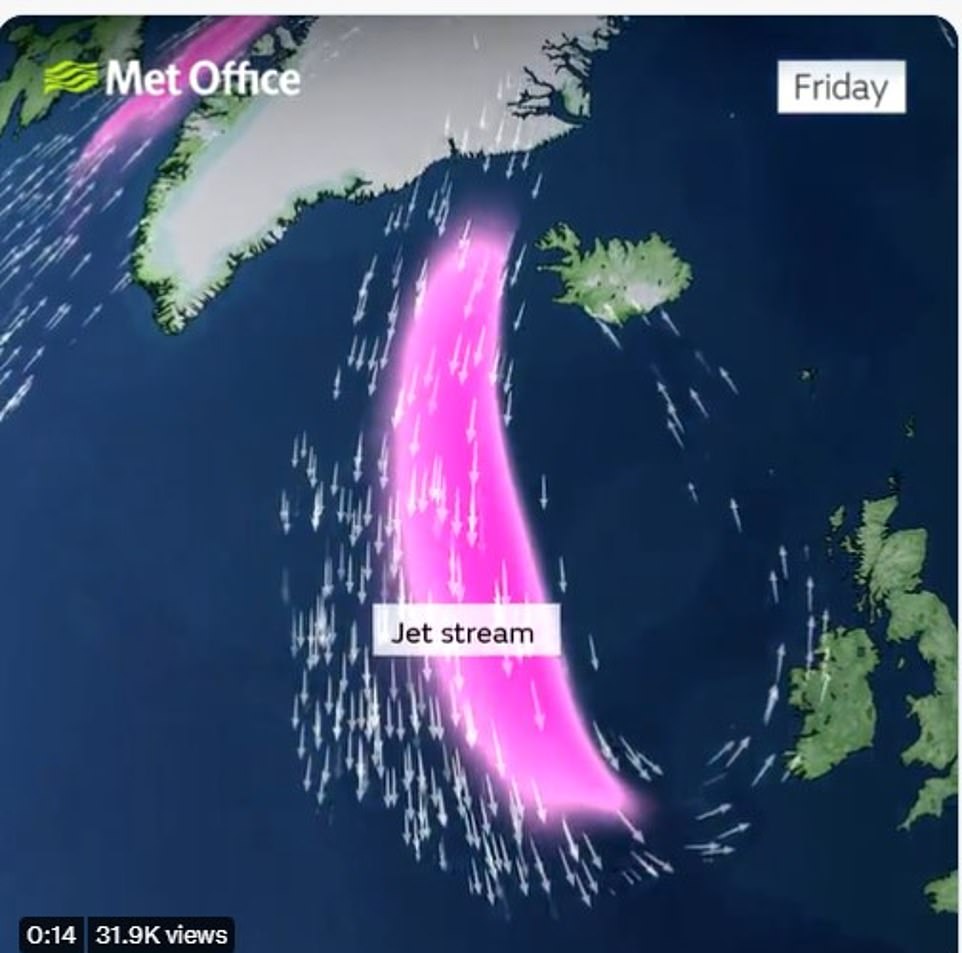 A jet stream is set to hit the UK over the next week, bringing with it stormy weather and heavy rain

Flooding is expected in the worst-hit areas, especially where the ground remains hardened by months of dry, hot weather.

The Met Office warned flooding could cause serious disruption and damage over the next week as the whole country is hit by the downpour – adding that a month’s worth of rain could fall in parts of the country.

Met Office spokesperson Stephen Dixon told the MailOnline some ‘isolated parts’ of the UK could see between 75 to 100 millimeters of rain in just 24 hours this weekend, causing flooding and ‘tricky travel conditions’.

Mr Dixon added this was a dramatic contrast with the average UK rainfall in September which is around 90mm.

He said ‘isolated spots could see possibly up to a month’s worth of rain in a short period of time’ with other parts of the country facing strong winds and thunderstorms.

Mr Dixon added: ‘On Saturday and Sunday some areas could see between 75 and 100mm of rain in a 24-hour period.

‘So, some fairly significant rainfall for some areas is possible but the detail on this is still being worked out. We’ll gain more certainty of that in the coming days.

‘These heavy showers are building in from the south on Friday and gradually moving northwards, some northern areas of the UK could see some high totals on Saturday. 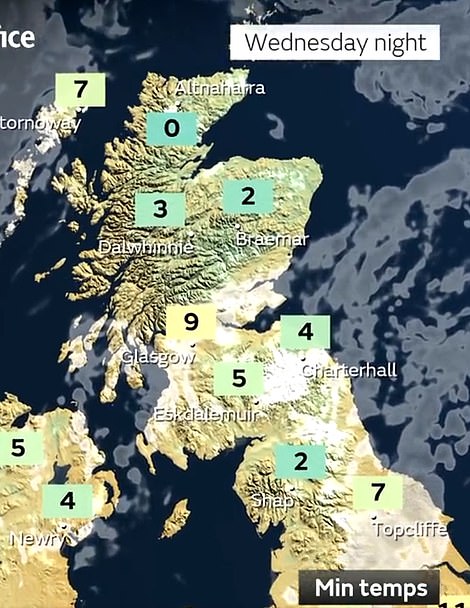 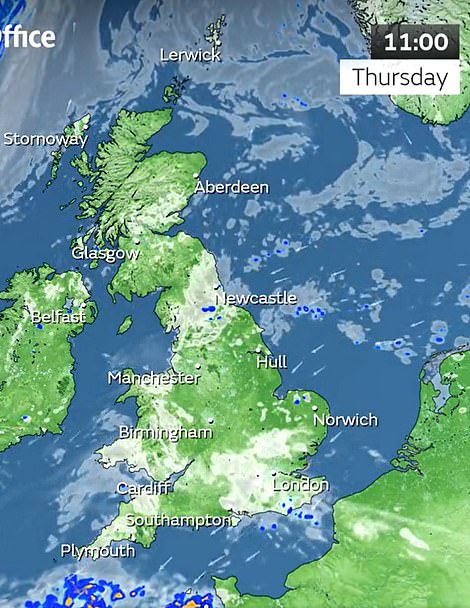 Left: The Met Office said there could even be frost in the Highlands of Scotland on Wednesday night as temperatures plummet. Right: Cold, wet weather is already beginning to set in across the UK today as autumn begins 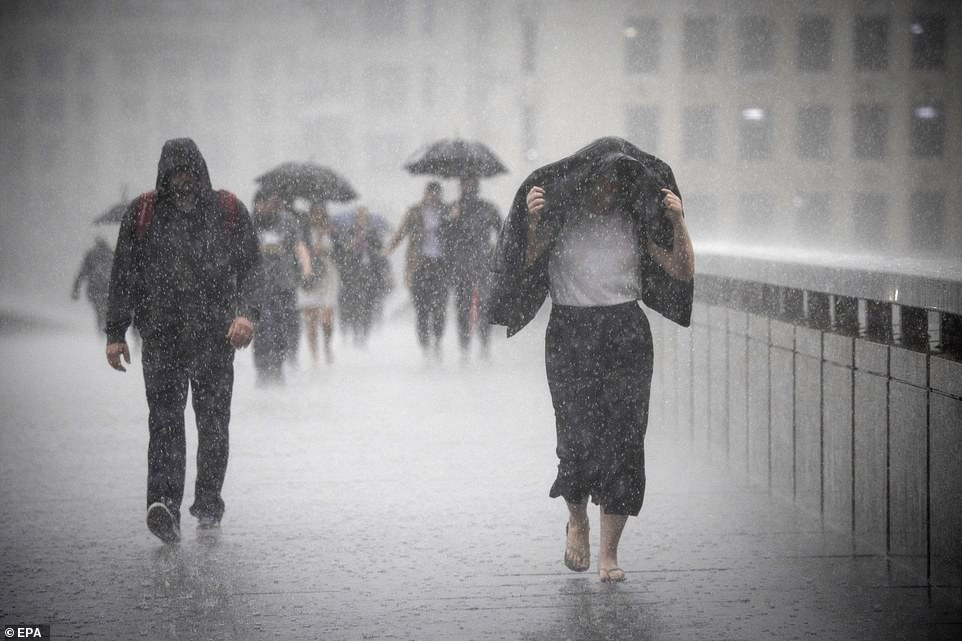 Heavy rain is set to hit the UK once again over the next week as the summer comes to an end (Pictured: London on August 17) 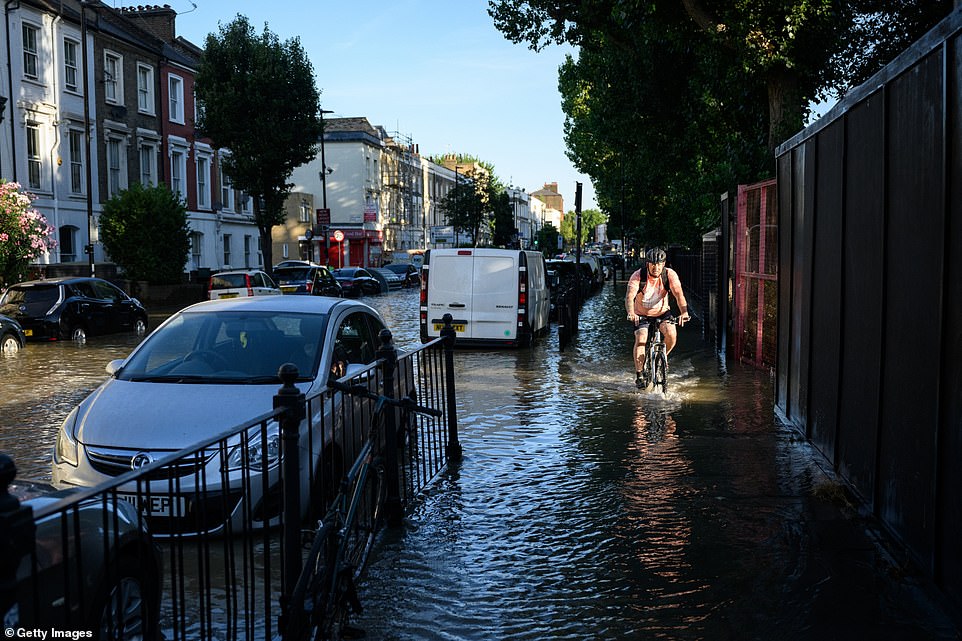 Flooding is expected in places most seriously hit by the downpour over the next week, which is likely to disrupt roads and public transport 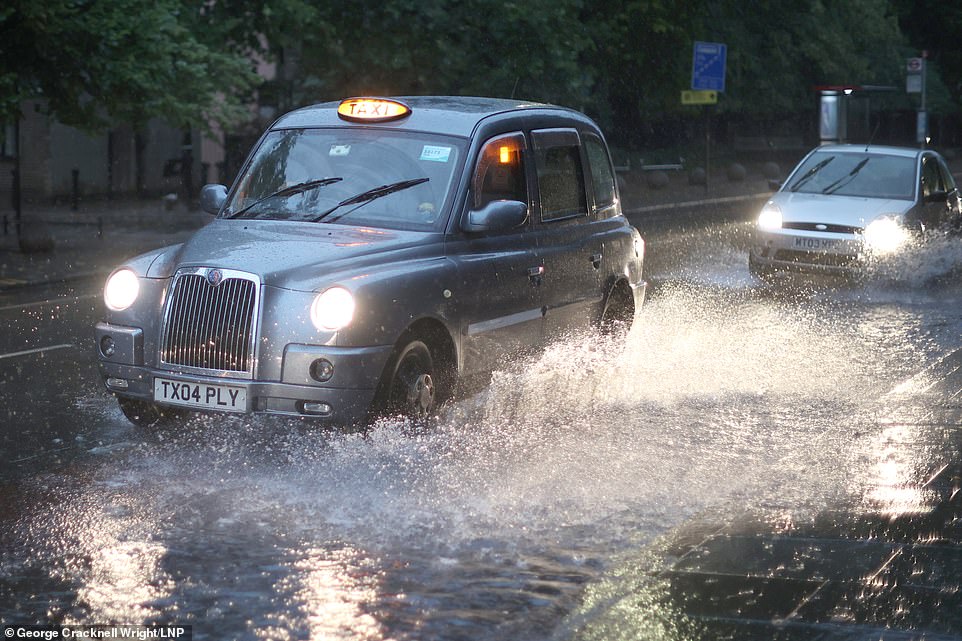 Disruption is likely in the next few days

‘That unsettled theme continues through the weekend with some wind and rain early next week as well.’

Heavy rain is especially forecast for Sunday, as a jet stream is set to soak the vast majority of the UK for at least a week.

The deluge comes as many children are heading back to school after the summer holidays in England and Wales.

The storms could pose a serious flood risk after a summer which saw a drought declared in much of the south of the UK.

This has left soil hardened as less absorbent, meaning water is more likely to flood the surface – impacting roads and railway lines.

Scotland is set to be hit by strong winds from Saturday onwards, with heavy rain in the south-west of the country. As temperatures plummet to as low as 0C, there could even be frost appearing in parts of the Scottish Highlands as early as next Wednesday.

Northern Ireland and the north of England are also in for a long period of heavy rain as the jet stream hits over the next week.

However, despite the downpours the Environment Agency said it was still unlikely to be enough to refill rivers dried out by the record-breaking drought of this summer.

The Met Office said the beginning of September is set to: ‘bring areas of thick cloud and heavy or thundery periods of rain or showers to many places.

‘Any periods of rain could be longer spells than recently experienced. Strong winds are also likely in places, perhaps with a risk of gales too.

‘Temperatures are expected to be around average but could be variable, especially under longer spells of rain where it may be cooler, or in any sunshine which will feel warmer.

‘Towards the end of the period, the rainfall is likely to die out, leading to many areas becoming a little drier, although there may still be a chance of showers for many places. Temperatures will probably be around average.’

The Met Office added in its long-range forecast that there is likely to be an east-west split over the next month, with the west of the country getting the worst of the rain.

Lates News:
2022-09-01
Previous Post: EOS Price Analysis: Key Support Nearby At $1.30
Next Post: OpenSea Says It Will Only Support Ethereum PoW NFTs On Its Network