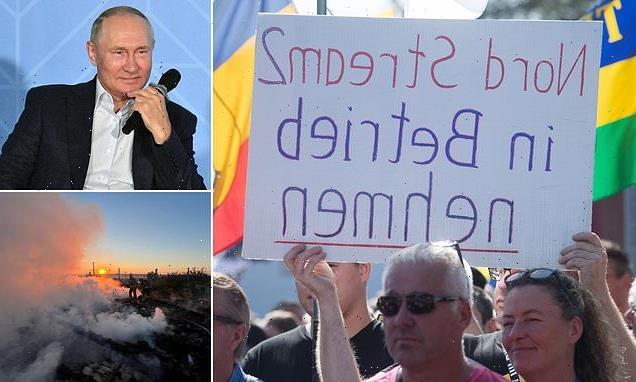 The Kremlin said on Monday the west was to blame for Gazprom halting gas deliveries to Germany via the Nord Stream pipeline, pointing the finger at economic sanctions instead of a desire to pressure NATO countries supporting Ukraine.

European gas prices surged on the news that Russia was tunring off the taps to Europe, sending a new tsunami through the European Union economy that has yet to recover from the Covid-19 pandemic.

EU governments are racing through packages worth billions of dollars to prevent power companies being crushed by a liquidity crunch and to protect households from soaring bills, after Russia’s state-controlled Gazprom said it would stop pumping gas via the Nord Stream 1 pipeline due to a fault.

‘Problems with pumping (gas) arose due to sanctions that were imposed against our country,’ Kremlin spokesman Dmitry Peskov told reporters, several days after the key pipeline was closed indefinitely for repairs.

‘Sanctions that prevent the units from being serviced, that prevent them from being moved without appropriate legal guarantees… it is these sanctions imposed by Western states that have brought the situation to what we see now,’ Peskov added.

He said the Kremlin ‘rejects attempts’ by the West to ‘place responsibility and blame’ on Moscow.

‘It is the collective West – in this case the European Union, Canada and Britain – that are to blame for the situation reaching this point,’ Peskov said.

On Friday, Russian gas giant Gazprom announced that the Nord Stream pipeline due to reopen at the weekend after three days of maintenance would remain shut for repairs after ‘oil leaks’ were discovered in a turbine.

The blame-game began when Siemens Energy transported the turbine to Canada for servicing, but refused to return the equipment, citing sanctions. 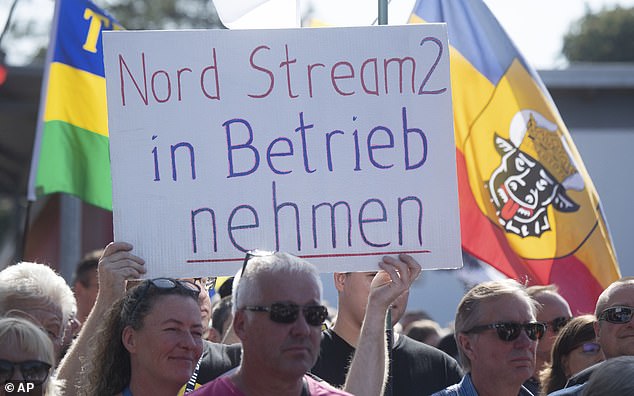 People take part in a demonstration for the commissioning of Nord Stream 2 gas pipeline with a banner reading ‘Start Nord Stream 2’ in Lubmin, Germany.  Russia has blamed Western sanctions for the price surge after it turned off the taps to Europe, with Russian energy giant Gazprom announcing on Friday that it would not restart the pipeline as planned 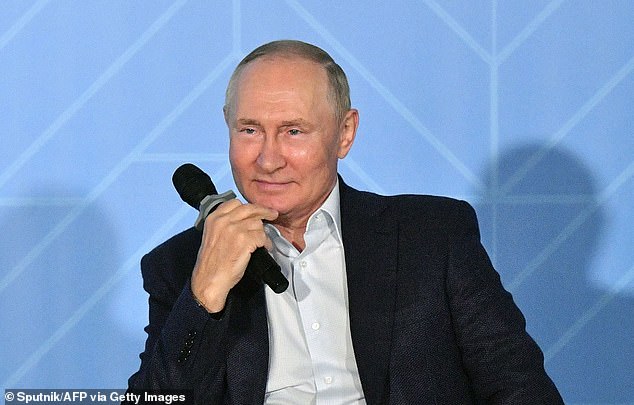 Russian President Vladimir Putin is pictured September 5. The Kremlin said it ‘rejects attempts’ by the West to ‘place responsibility and blame’ on Moscow 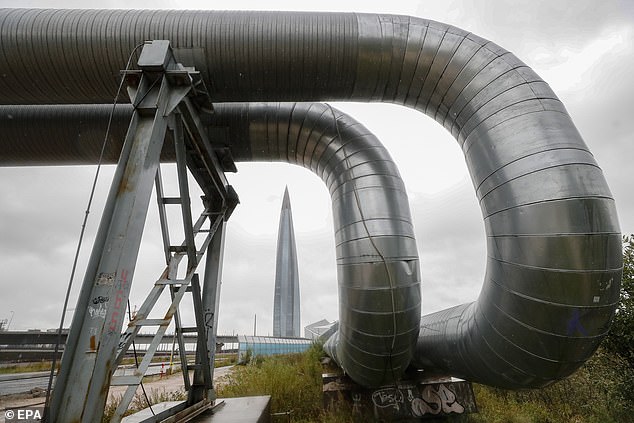 Gazprom said that gas flow through the Nord Stream 1 would come to a complete halt from 31 August onward, blaming Western sanctions for the cut-off

Gazprom — the gas giant owned by the Russian state — reduced gas exports by 40% in June, saying issues with the turbine were to blame.

The Kremlin said that turbine was ‘crumbling’ and needed sending away, insisting that Gazprom had nothing to do with the delay in gas exports.

Western countries exempted Siemens from the sanctions, allowing the equipment to return from Canada.

But after plans were announced for its return, Russia said another of the gas pumping turbines was due for maintenance.

The turbine is currently in Germany, with Chancellor Olaf Scholz accusing Moscow of blocking the return of the critical piece of equipment. He posted a picture of himself next to the fixed turbine, saying Gazprom did not want it back.

‘It is obvious that nothing, nothing at all, stands in the way of the further transport of this turbine and its installation in Russia. It can be transported and used at any time,’ said Scholz, according to The New York Times.

‘There is no technical reason whatsoever for the reduction of gas supplies.’ 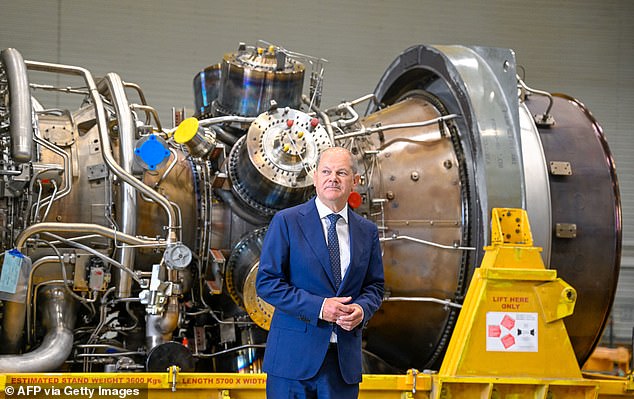 Chancellor Olaf Scholz posted a picture of himself next to the fixed turbine, accusing Moscow of blocking the return of the critical piece of equipment 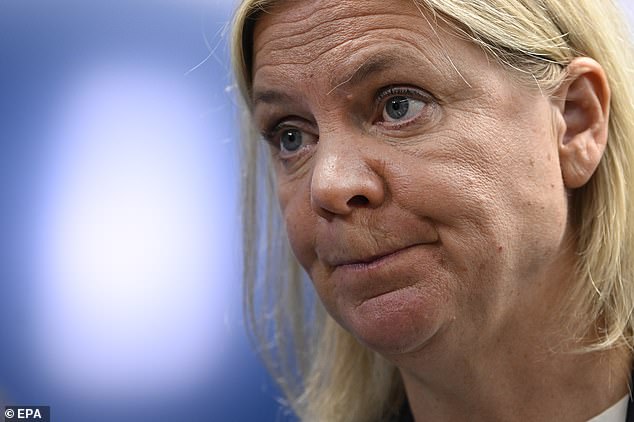 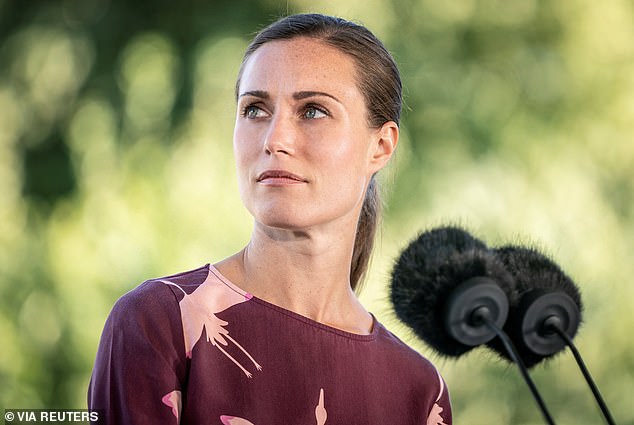 A host of European power distributors have already collapsed and some major generators could be at risk, hit by caps that limit prices rises they can pass on to consumers or caught out by hedging bets with gas prices now 400% more than a year ago.

‘This has had the ingredients for a kind of a Lehman Brothers of energy industry,’ Finnish Economic Affairs Minister Mika Lintila said on Sunday, referring to the US bank that collapsed in 2008 and heralded the global financial crash.

Finland aims to offer £8.63billion and Sweden £20billion in liquidity guarantees to their power companies.

Germany, more reliant than most EU states on Russian gas, has offered a multibillion-euro bailout to power utility Uniper.

‘The government’s programme is a last-resort financing option for companies that would otherwise be threatened with insolvency,’ Finland’s Prime Minister Sanna Marin said. 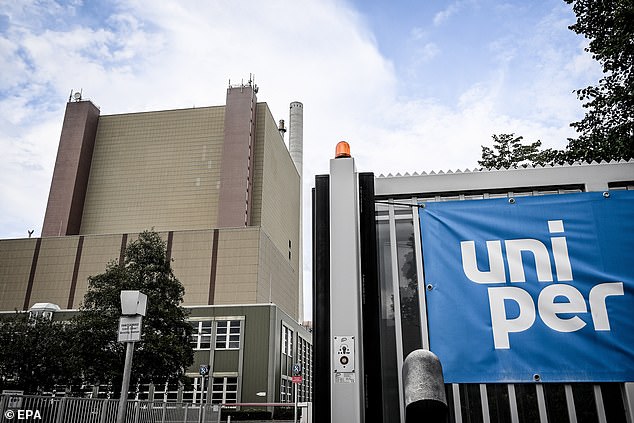 The entrance of the hard-coal-fired power plant Heyden operated by energy supplier Uniper in Petershagen. Germany has offered a multi billion-euro bailout to the power utility company 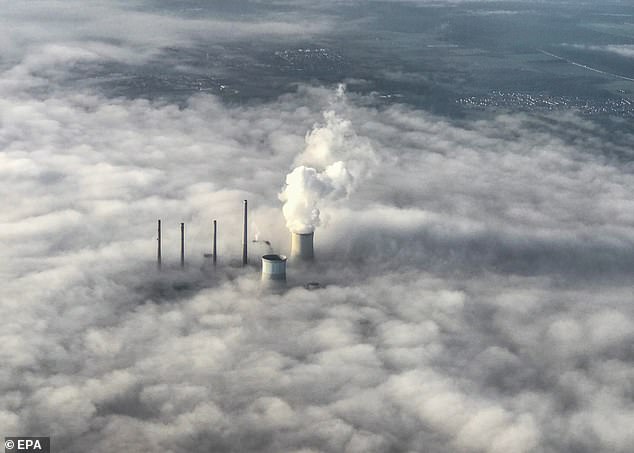 Steam escapes from the cooling towers of the Staudinger coal-powered power plant in Grosskrotzenburg near Frankfurt, owned by Uniper

Nord Stream 1, which runs under the Baltic Sea to Germany, historically supplied about a third of the gas Russia exported to Europe, although it was already running at just 20% of capacity before last week’s maintenance outage.

Russia also sends gas to Europe via pipeline across Ukraine, another major route. But those supplies have also been reduced during the crisis, leaving the EU racing to find alternative supplies to refill gas storage facilities for winter.

Several EU states have triggered emergency plans that could lead to energy rationing and fuelling recession fears, with inflation soaring and interest rates on the rise.

Some energy-intensive industries in Europe, such as fertiliser makers and aluminium producers, have already scaled back production. Other industries, already grappling with chip shortages and logistics logjams, face rocketing fuel bills. 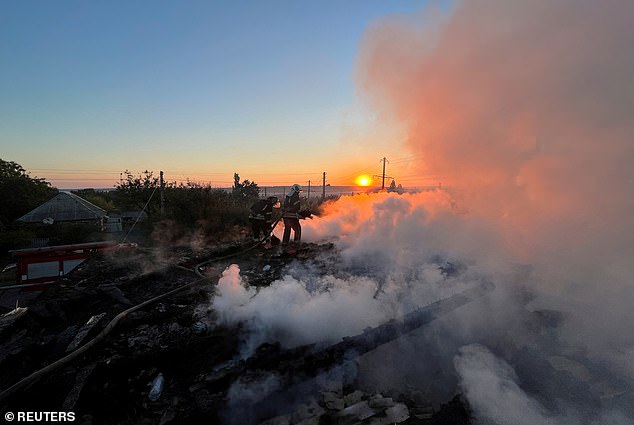 Ukrainian firefighters put out fire in a residential house after a Russian military strike, as Russia’s attack in Ukraine continues, in Bakhmut, September 5 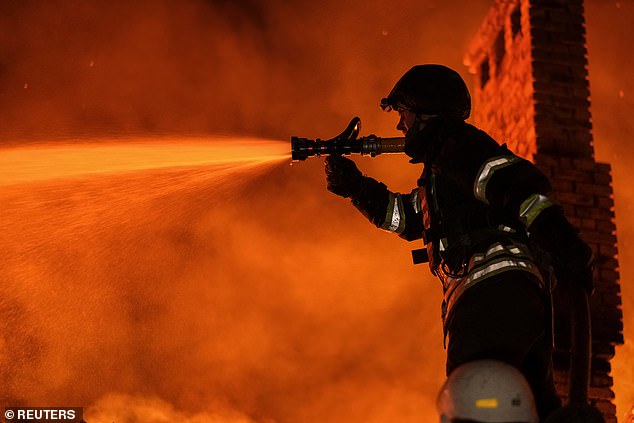 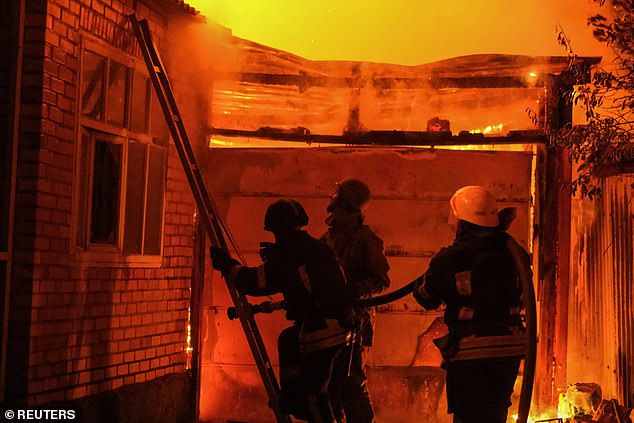 Russia has reduced or halted supplies to different European nations, causing energy prices to soar following its offensive in Ukraine

‘Supply is hard to come by, and it becomes harder and harder to replace every bit of gas that doesn’t come from Russia,’ said Jacob Mandel, senior associate for commodities at Aurora Energy Research.

EU countries’ energy ministers are due to meet on September 9 to discuss options to rein in soaring energy prices including gas price caps and emergency credit lines for energy market participants, a document seen by Reuters showed.

German Chancellor Olaf Scholz said on Sunday that Germany, the EU’s economic powerhouse, had been preparing for a total halt in gas deliveries.

Germany is at phase two of a three-stage emergency gas plan. Phase three would see some industry rationing.

In the race for alternative supplies, Germany is installing temporary liquefied natural gas (LNG) terminals as a stopgap while it builds permanent facilities, so it can ship in gas from further afield.

‘There’s plenty of scope to replace that (Russian) gas with LNG imports for now, but when the weather turns cold and demand starts to pick up in the winter in Europe and Asia, there’s only so much LNG out there that Europe can import,’ Mandel said.

The global market for LNG was already tight as the world economy sucked up supplies in the recovery from the pandemic. The Ukraine crisis has added further demand.

Norway, a major European producer, has been pumping more gas into European markets but cannot fill the gap left by Russia.

Klaus Mueller, president of Germany’s Federal Network Agency energy regulator, said in August that even if Germany’s gas stores were 100% full, they would be empty in 2-1/2 months if Russian gas flows were halted completely.

Germany’s storage facilities are now about 85% full, while facilities across Europe hit an 80% target last week.