Ari Emanuel’s Conundrum: What To Do After UFC Chief Caught On Video Slapping Wife 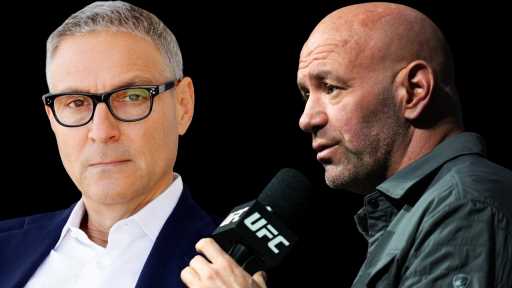 Endeavor CEO Ari Emanuel has often staked out a moral high ground as he built Endeavor, most recently calling on companies doing business with Kanye West to end their relationships with the rapper after an anti-Semitic rant. In 2010, he famously cut ties with WME client Mel Gibson after racist slurs. Now, he faces a conundrum at his company’s crown jewel, UFC, whose longtime CEO Dana White was seen on a rather shocking leaked video smacking his wife on New Year’s Eve.

Neither Endeavor nor Emanuel have yet weighed in on White, and Endeavor reps weren’t immediately available to comment Wednesday.

On Kanye West, Emanuel was a bystander. White’s situation is closer to home.

Video footage posted by TMZ of an argument on the balcony of a VIP suite at the Cabo San Lucas nightclub in Mexico, shows White’s wife Anne slap him after he grabs her wrist. White then smacks his wife across the face in response before the pair are separated by other partygoers. See TMZ link here.

White has said he and his wife have apologized to each other and he told TMZ that “There was a lot of alcohol involved, but that’s no excuse.”

“You’ve heard me say for years, there’s never ever an excuse for a guy to put his hands on a woman.”

His wife Anne said in a statement: “Dana and I have been married for almost 30 years. Unfortunately, we were both drinking too much on New Year’s Eve and things got out of control, on both sides. We’ve talked this through as a family and apologized to each other. I just hope people will respect our privacy for the sake of our kids.”

High-profile UFC has been driving revenue and profit for its parent company, which went public last year. Endeavor shares fell sharply yesterday after the video surfaced, closing down more than 5%, outpacing losses in the broader market. The stock recovered some today and is changing hands at $21.95, up about 3.5%.

Endeavor owns 100% of UFC, which White has led since 2001. It’s lucrative at a time when sports rights are in demand and price-tags for deals continue to rise. For the third quarter ended in November, Endeavor’s Owned Sports Properties division, led by UFC saw sales rose 39% from the year before to $402 million, driven by higher media rights fees and live event, partnership, consumer product and licensing revenues. Operating profit of $196 million was up 45%, year-over-year.

This fall, Emanuel was very vocal over Kanye West, penned a series of the op-eds condemning the rapper’s infamous “Death Con 3” tweet followed by his doubling down on his claims of alleged mistreatment by Jewish people. In October, Emanuel wrote in the Financial Times that, “Those who continue to do business with West are giving his misguided hate an audience. There should be no tolerance anywhere for West’s anti-Semitism.”

“This is a moment in history where the stakes are high and being open about our values, and living them, is essential. Silence and inaction are not an option.”

He followed that with a December op-ed for his hometown paper, the Chicago Tribune, calling out the “cartoonish Kanye clown show,” Dave Chappelle, the Republican Party and Donald Trump for “the normalization of white supremacy, antisemitism and racism” in America.

Of Gibson, Emanuel wrote, “I wish Mel Gibson well in dealing with his alcoholism, but alcoholism does not excuse racism and anti-Semitism.” Gibson was arrested in 2006 after an anti-Semitic, sexist tirade.

Domestic violence has been an issue too for professional athletes and executives.

In 2014, Baltimore Ravens running back Ray Rice was suspended from the NFL after an incident at an Atlantic City hotel where he hit his fianceé Janay Palmer and dragged her out of an elevator. The sentence, relatively lenient, at two games, was followed by intense backlash as video of the event went viral. NFL guidelines for domestic abuse were toughened. Rice appealed his suspension and it was overturned but no team signed him and he officially announced the end of his football career in 2018. The support of Palmer, who married and has a family with Rice, wasn’t enough to save his career.

In October, Chris Albrecht was put on leave and is expected to leave his post as president of Legendary Television after new details from his days at HBO emerged in the book It’s Not TV: The Spectacular Rise, Revolution, and Future of HBO by Felix Gillette and John Koblin. It covers how Albrecht allegedly choked former HBO executive Sasha Emerson in the summer of 1991 — months after they ended their consensual affair while they were both married. A spokesman for Albrecht denied the incident took place. A police report was not filed. The book says Emerson went through mediation with HBO and took a settlement before leaving the network.