Where does Mexico really get its guns? 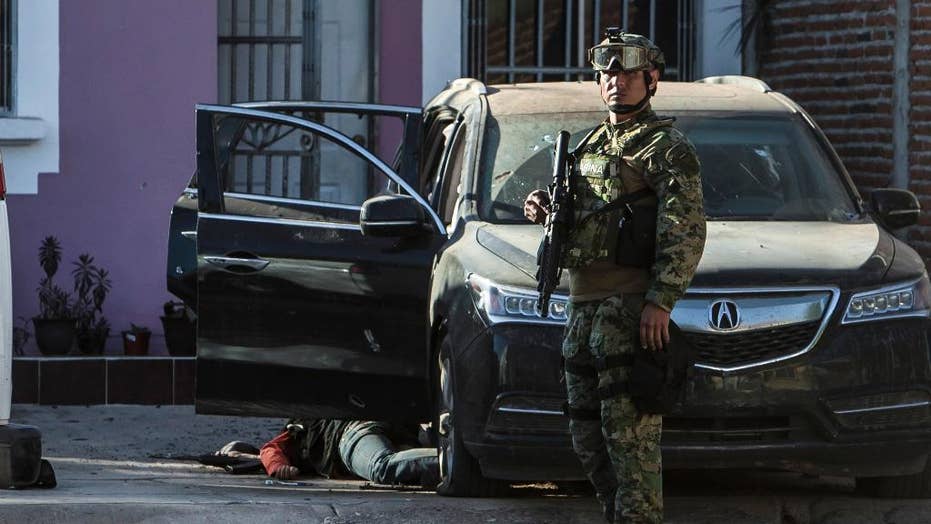 MEXICO CITY – Tucked inside a narrow wedge of a traditional open-air market is one of Mexico’s most dangerous black market operations. It’s known as the Tepito.

It’s a barrio where even the police mostly remain outside. Inside, it’s under the tightly controlled thumb of the Union de Tepito, otherwise known as the Union Cartel – one of the capital city’s most violent and well-financed criminal players. Cartel “hawks” – often children – are positioned in the entry to report on any unusual visitors inside the tented tunnel. Those inside worship the Mexican folklore legend Jesús Malverde, who steals from the rich to give to the poor. He’s the narco saint, the so-called patron saint of drug traffickers, the perceived “angel of the poor.”

But, from the pirated goods – including sex toys, endangered turtle eggs, counterfeit designer clothes, DVDs and drugs – to other lucrative enterprises including kidnapping and extortion, once trust is gained, one may be lured by a cartel operative into private homes or underground bunkers, which are scattered city-wide, to make a weapons purchase.

The inventory boasts everything from low-caliber weapons, rifles, grenades, grenade launchers and 50-caliber rifles, with prices for basic handguns beginning at just $300 and going as high as $1,500 for an AR-15 and $3,000 for more advanced weapons systems, according to Mexican intelligence officials. 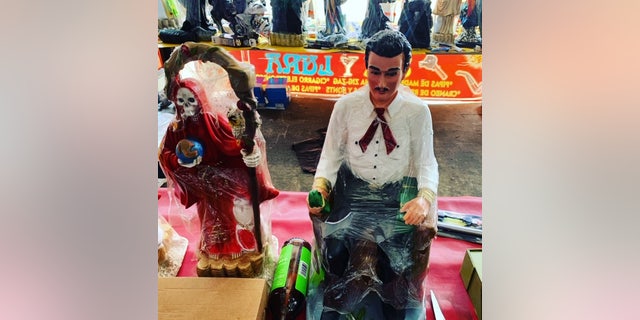 The Union Cartel started around 2010 as a small group dedicated to shielding the community from crime, with locals paying a fee for the added protection. But, over the years it has morphed into a large and violent criminal enterprise. Its main leaders, Roberto “El Betito” Mollado Esparza and David “El Pistache” García Ramirez, both were arrested last October but are believed to maintain their top-brass roles from behind bars. Local reports indicated the heavy-handed cartel started proactively recruiting both former and active policemen following the leaders' arrests to defend the illicit sales and oversee extortion missions.

However, many people in Mexico have viewed the lack of gun-control measures in the United States as wreaking havoc on the violence in their country and enabling the illicit activities to rage.

“A lot of the violence in the U.S. is because of the drugs going in from Mexico, and a lot of the violence in Mexico is because of the guns coming from the U.S.,” one high-ranking former Mexican intelligence official told Fox News, speaking on the condition of anonymity. “Many of the cartels in Mexico are being paid by counterparts in the U.S. not only with money but with guns.”

Some estimates – including a recent study published in Oxford’s Journal of Economic Geography – have pegged the number of guns crossing the U.S-Mexico border at over 200,000 annually.

The most recent available data compiled by the National Tracing Center for the Bureau of Alcohol, Tobacco, Firearms and Explosives (ATF) indicated that a total of 67,295 firearms recovered in Mexico between January 1, 2013, and December 31, 2018, were determined to have been either manufactured in the U.S. or legally imported into the U.S., an average of 11,216 per year. 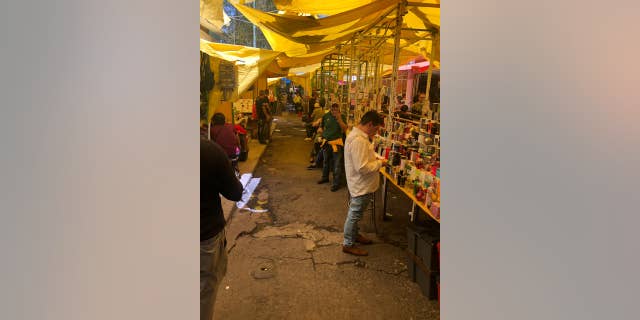 One of the most dangerous pockets of Mexico City: Teptio, the primary-black market area, under the thumb of the Union Cartel.
(Hollie McKay/Fox News)

Moreover, a total of 28,741 recovered weapons – an average of 4,790 annually – were classified as having an “undetermined” source.

Nonetheless, some law enforcement experts and analysts have concluded such figures represented only a small amount of the firearms rotating through the cartel-plagued country and argued that many more that Mexican officials have seized were not documented or traced.

And, the ATF itself became a contentious piece of that puzzle between 2009 and 2011 in what became known as “Operation Fast and Furious,” when the ATF’s Phoenix Field Division allowed illegal gun sales in order to track the sellers and purchasers who were believed to be linked to Mexican drug cartels. In 2010, two of the weapons issued in the operation turned up at the murder scene of a U.S. Border Patrol agent.

Last month, Mexican Foreign Relations Secretary Marcelo Ebrard pushed back amid U.S pressure to curb the flood of migrants to the border, asserting that in turn, the U.S needed to “do much more” to stop firearms trafficking into Mexico.

Still, the notion of whether the U.S border wall would benefit Mexico – by helping block the illicit transfer of firearms – has been subject to debate.

Some supporters have said it would help stem the flow. “A wall would help both sides to monitor the people and contraband going back and forth,” said Derek Maltz, a former head of the Drug Enforcement Administration’s (DEA) Special Operations Division. “We want to create one option: going through the port of entry to help the limited resources screen the people and vehicle at the border.”

Lee Oughton, the managing partner and chief operating officer of the Mexico City-based Fortress risk-management company, concurred that while a wall would hardly solve the trafficking problem, it would serve as the “first line of defense” for both countries.

Meanwhile, multiple officials, speaking on condition of anonymity, said the wall would have little impact as many of the arms have been transferred through regular border crossings – via bribes issued to Mexican officials – or smuggled through drug tunnels.

According to Thomas Kilbride, a retired Department of Homeland Security agent and Immigration and Customs Enforcement (ICE) policy adviser, the general assumption has been that the guns got to Mexico from the U.S. predominantly by straw buyers working on behalf of gun-trafficking organizations – meaning the gun was bought illegally by someone on behalf of someone else, or from a private seller without a federal license.

“The parts are vastly hidden in vehicles in many pieces then reassembled in Mexico,” he noted.

Also, they’re routinely disguised inside other items such as goods and electronics.

The common estimation among officials has been that some 90 percent of guns in Mexico stemmed from the U.S., but such a figure would be ripe for dispute.

“I wouldn’t say that the number is that high. I would say that maybe it will be around 50 percent. The known modus operandi of weapons and money, for drugs, does happen as a transaction. But also, knowing some of the weapon systems available here in Mexico,” Oughton said, “it would suggest that they would be illegally manufactured here, and also [found] their way from other parts of Latin America, Eastern Europe… Russia and China. For me, it’s an impossibility and maybe a bit of political wrangling to lay the full blame at the USA’s door for supply and demand on guns.”

Other high-ranking officials also underscored that the majority of guns these days have been flowing not from the United States, but from the south.

“Most cartels buy in bulk, and the weapons are coming from places like Nicaragua and other South American countries. Also Asia and some from the Middle East,” a Tijuana-based police authority who requested anonymity explained. “And, another factor is the CNC machines making uppers in clandestine shops in Mexico.”

According to recent Fortress intelligence assessments, an increase in surveillance on Mexico’s northern border has meant criminal groups have had to open new arms-trafficking routes from Central America to the center of Mexico, especially into Tepito – making it the largest underground weapons distribution center in the country.

VENEZUELANS REGRET GUN BAN, 'A DECLARATION OF WAR AGAINST AN UNARMED POPULATION'

Studies have indicated weapons have been moving increasingly from Colombia, Spain, and Pakistan – in addition to the United States – to be resold in the Tepito underground.

Mexico itself has had some of the most stringent gun-control measures in the broader region, which has largely fueled the sentiment in recent years that gun violence was a result of the United States’ Second Amendment and lax gun laws by comparison. Even though the right to bear arms has been protected by the Mexican Constitution, obtaining a weapon would be a difficult grind for the average person. The entire country has just one legal gun store, known as the Directorate of Arms and Munitions Sales, which is located in Mexico City and operated by the military.

Anything more potent than a .38 caliber gun is prohibited, and customers must endure upwards of a six-month wait in their applications for permits as they undergo background checks. Those purchasing for “personal defense” would be allowed to own just one handgun. People in hunting clubs would be granted leeway to possess additional rifles. In all, fewer than 40 weapons are issued per day on average.

As a deterrent, illegal possession of a firearm, even small amounts of ammunition, could result in lengthy prison sentences.

Still, gun violence has continued to grip the country.

For some critics, it’s an explicit example of tight gun-control policies failing their citizens as homicide rates rose – up 3.3 percent in the first eight months of 2019 compared to 2018 – while law-abiding citizens have been left to recoil in the face of illegal gun owners. Over 33,000 people were murdered in Mexico last year alone.

“Mexico is a horrifying example of what can happen to a people who are disarmed and left helpless to be preyed upon by armed criminals,” added Frank Miniter, the editor in chief of the NRA’s magazine America’s 1st Freedom. “Some Mexican citizens have tried, desperately and as a last resort, to band together with whatever weapons they can gather to protect themselves.”