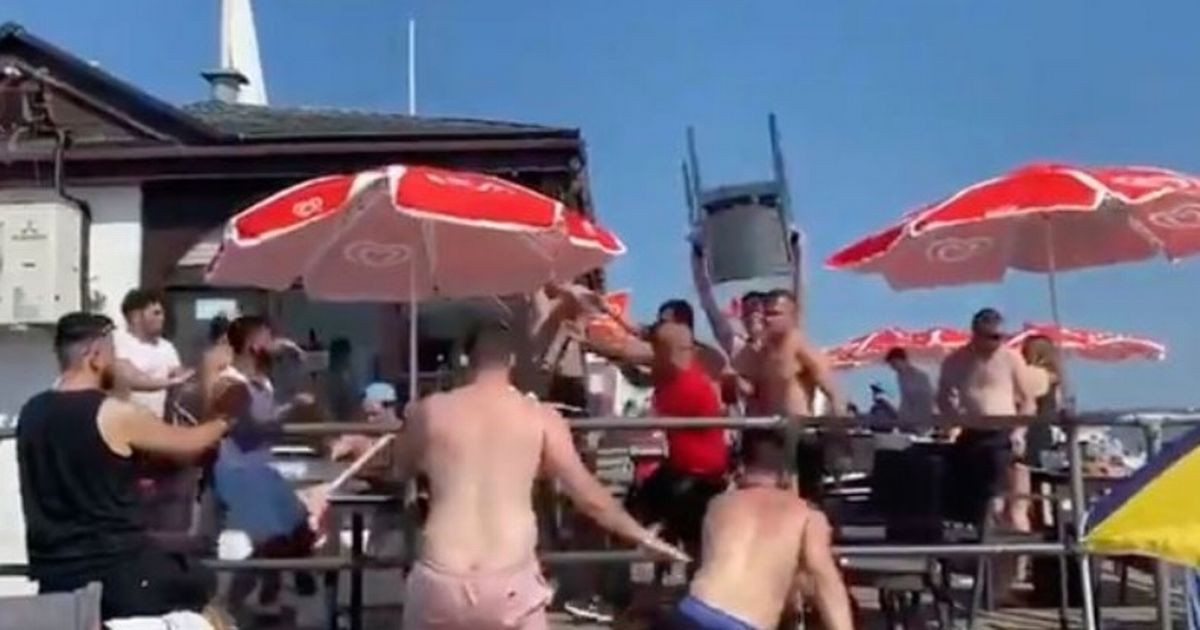 Police in Essex have released CCTV images of men they would like to speak with after thugs from rival groups viciously attacked each other at a beach cafe.

In total, cops have released 15 images after hooligans brought terror to the beach in Southend when they hurled chairs and projectiles at each other.

A video of the shocking scenes was widely shared on social media and now Essex Police are appealing for the public's help to locate the men pictured.

The District Commander for Southend said those in the video "behaved recklessly" and had "no care for the injuries" they may have caused families and children.

In the footage topless men are shown breaking into a frantic melee of violence at the beach cafe with one group positioned in the outside dining area and their rivals below on the beach.

The boozy beach brawl erupted on the sand at the Essex tourist hotspot on Sunday, the same day England played their opening Euros match against Croatia.

According to Facebook page Your Southend, Paul Thompson, owner of the Pebbles One cafe, said: "A group of people were eating lunch at one end of the decking.

"A second group confronted them from the beach and they began throwing deck chairs and chairs at each other.

“They seemed to be two groups that were known to each other. There were no injuries we know of and the police arrived swiftly to quell any further trouble."

Chief Inspector Ian Hughes, District Commander for Southend, said: “Our officers were out in force over the weekend helping people and keeping you safe.

“While the vast majority of people enjoyed the Southend sunshine safely there were, sadly, a few who attempted to spoil it for everyone else.

“Officers are working hard to identify those involved and as part of our enquiries we want to speak to speak to the 15 men pictured.

“If you recognise any of the men pictured or have information about who they are please contact us.

“If you are one of those pictured, please get in touch and speak to us.”

Those with any information are asked to please contact Southend CID on 101 quoting the crime reference number 42/113918/21 or contact Crimestoppers.