Thousands of mourners flooded the streets of India today to attend the funeral of an al Qaida linked military commander named ‘India’s most wanted’- who was killed in a gunfight yesterday.

Zakir Musa, a top militant commander linked to al Qaida, was killed on Thursday evening by government forces in Indian-controlled Kashmir during a counter-insurgency operation.

The shoot-out took place in the southern Tral area of Kashmir after Musa refused to surrender and fired grenades at the troops after they zeroed in on his hideout in a civilian home, said police. 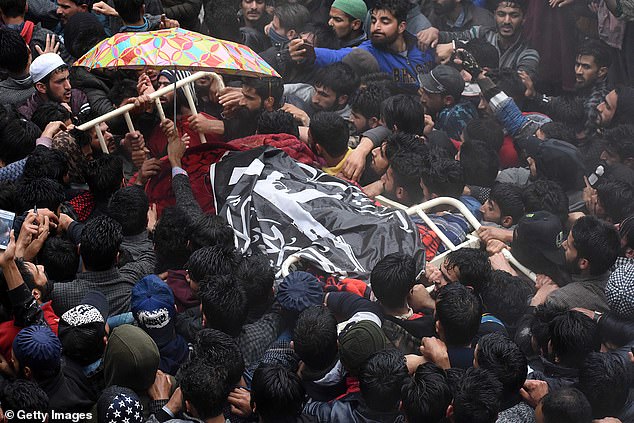 The curfew remains in place across much of the Kashmir Valley, including in the main city of Srinagar, in anticipation of more protests and clashes as schools and colleges remain closed. 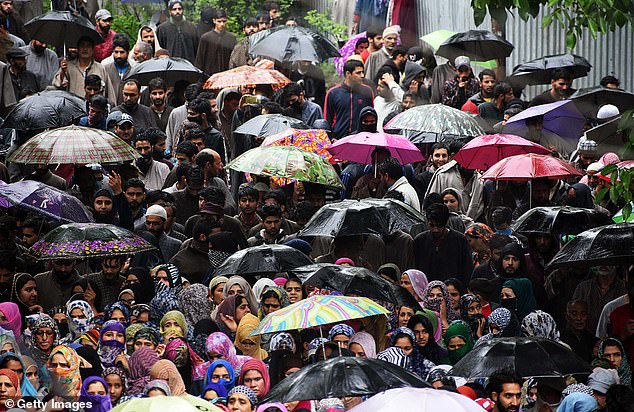 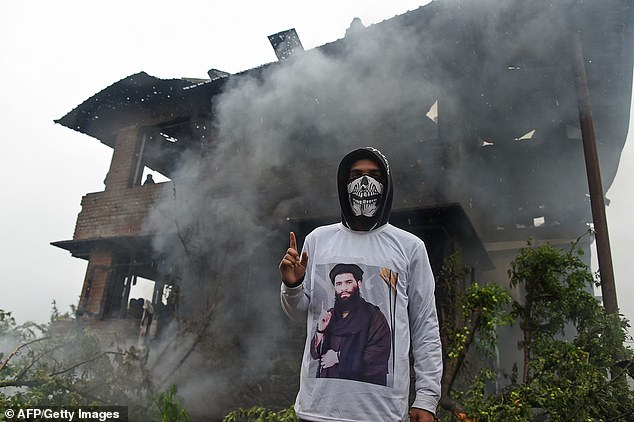 A Kashmiri protestor wears a shirt depicting a picture of a militant commander Zakir Musa as he stands in front of a damaged house following a gun battle between the commander Zakir Musa of Ansar Ghazwat-ul-Hind group and Indian government forces at Dadsar village in Tral, south of Srinagar 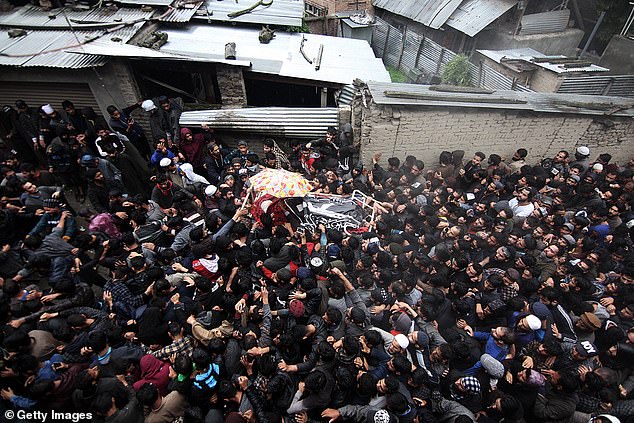 Earlier today, thousands turned out to participate in Musa’s funeral despite heavy rain and the security lockdown.

Crowds of mourners gathered in Tral, Kashmir, paying their respects to the commander despite a government imposed curfew in the area.

But in mid-2017, an al Qaida linked propaganda network said he became the head of an affiliate militant group, Ansar Ghawzat-ul-Hind. 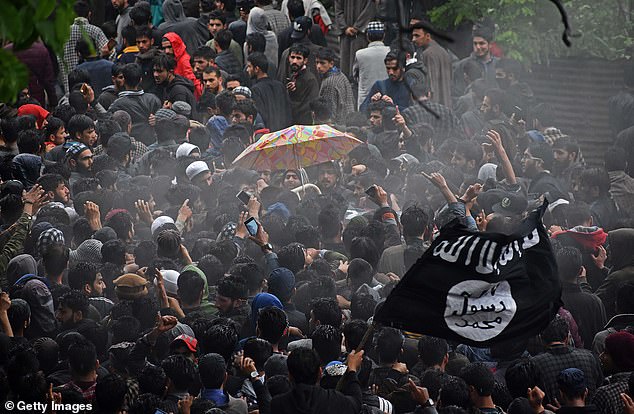 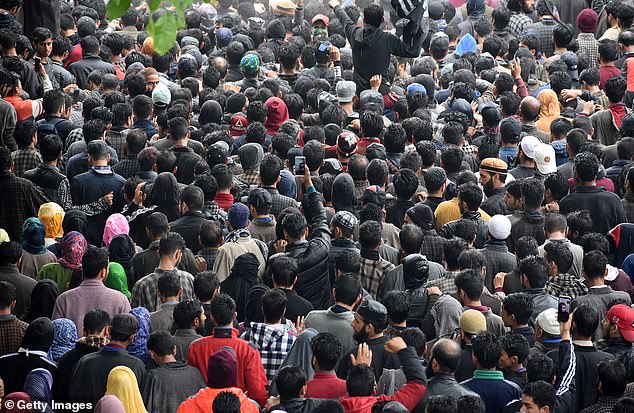 Musa regularly issued audio messages mainly stressing that Kashmir’s struggle was for Islamic cause and had nothing to do with nationalism, highlighting a shift in ideology among some rebels in the region where militants have mainly fought for either independence of Indian-controlled Kashmir or merger with Pakistan.

He instantly became a media sensation, particularly with New Delhi-based television news channels using him to showcase that the Kashmiri struggle for self-rule was part of a global militant agenda.

Previously, no global jihadi groups have openly operated in Kashmir, a territory divided between India and Pakistan but claimed by both. 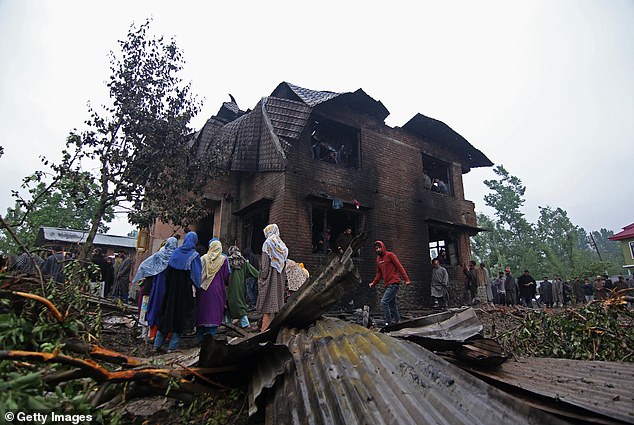 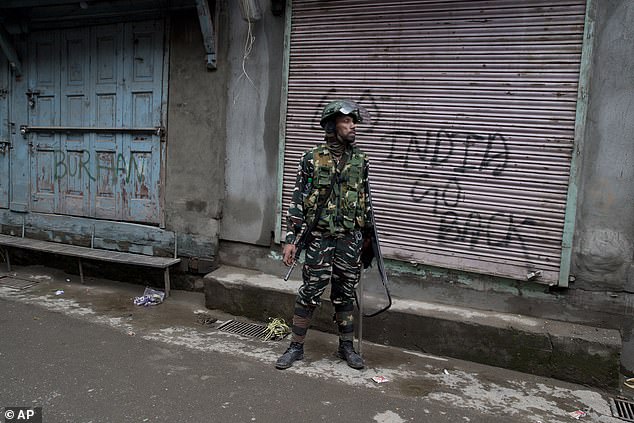 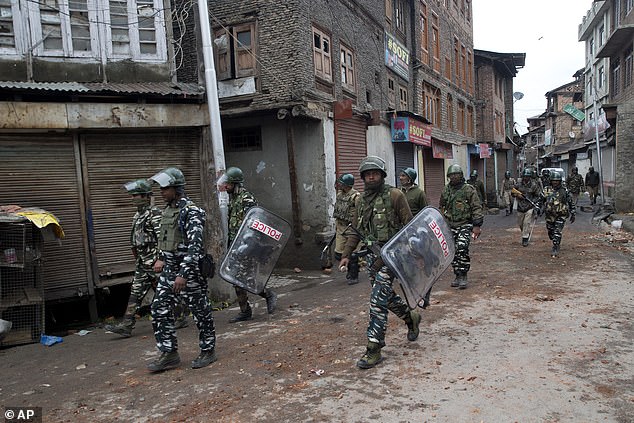 All Kashmir rebel groups rejected Musa and his al Qaida affiliate, some even calling him obstructive to their cause.

Separatist leaders who challenge India’s sovereignty over Kashmir have repeatedly rejected the presence of outside groups, including al Qaida, and have accused India of portraying the Kashmiri struggle as extremist.

Musa was a close aide of Burhan Wani, a charismatic Kashmiri rebel leader whose killing in 2016 triggered open defiance against Indian rule. 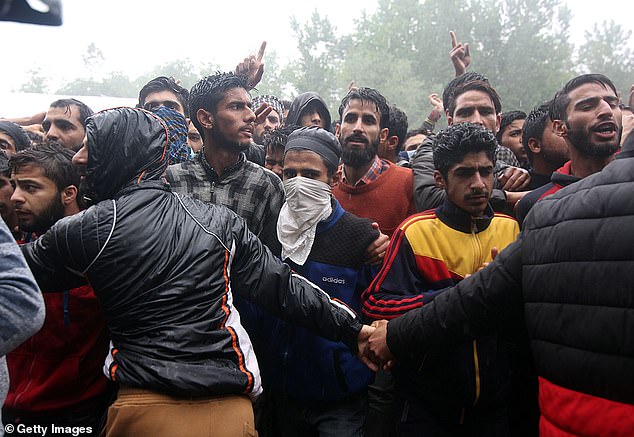 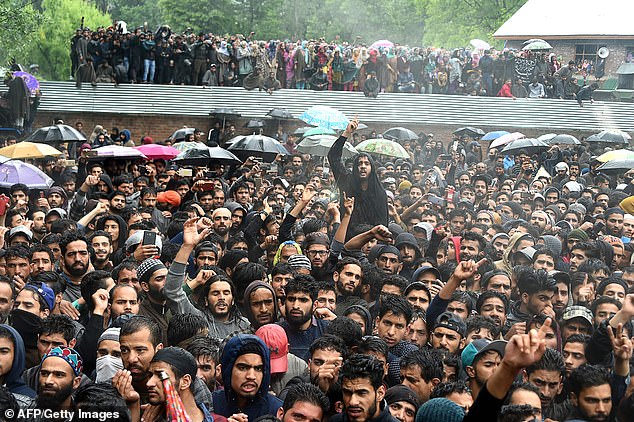 Wani’s death and the resulting public fury brought the armed rebellion into the mainstream in Kashmir and revived a militant movement that had withered in recent years to only about 100 fighters in scattered outfits.

Officials say since Wani’s killing, hundreds of young men have joined rebel ranks, some of them stealing weapons from soldiers and police. Wani’s death also cemented a shift in public behaviour, with people displaying anger at Indian rule openly and violently when troops raid villages to hunt rebels.

Rebel groups have been fighting against Indian rule since 1989. Nearly 70,000 people have been killed in the armed uprising and the Indian military crackdown. 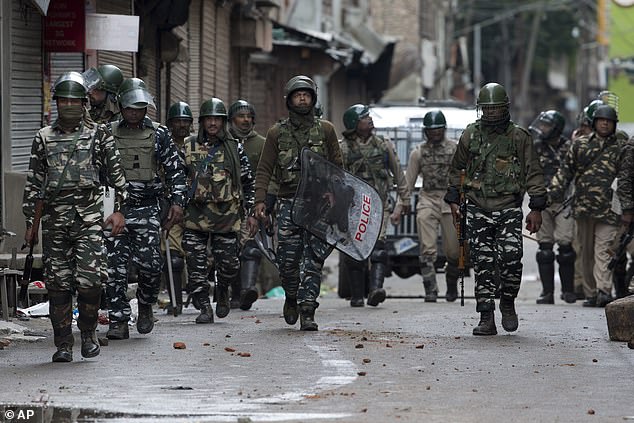 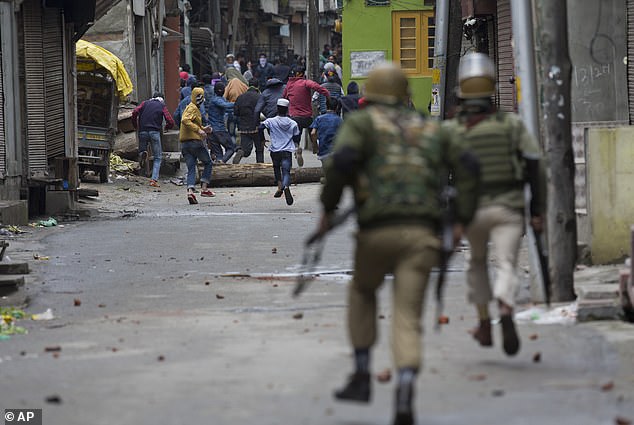 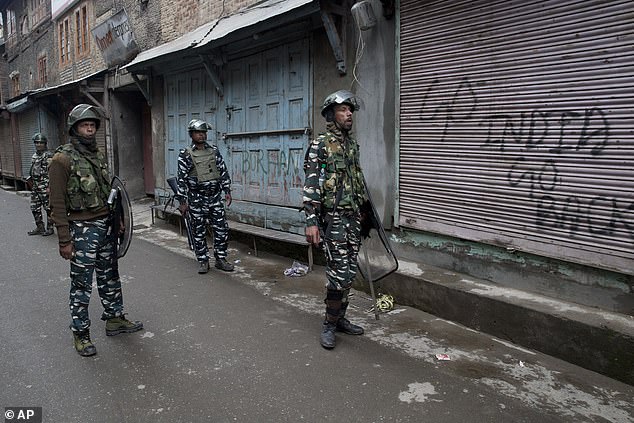 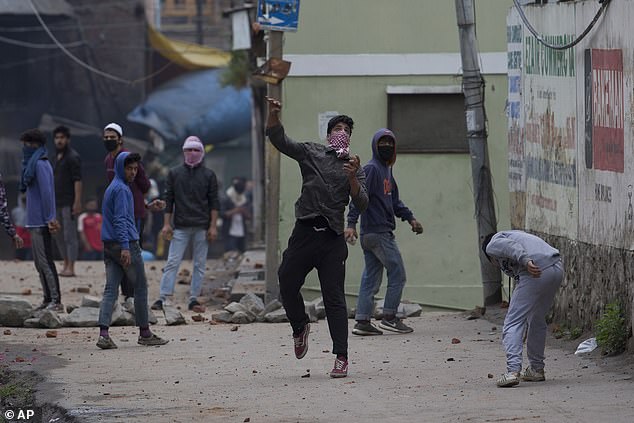 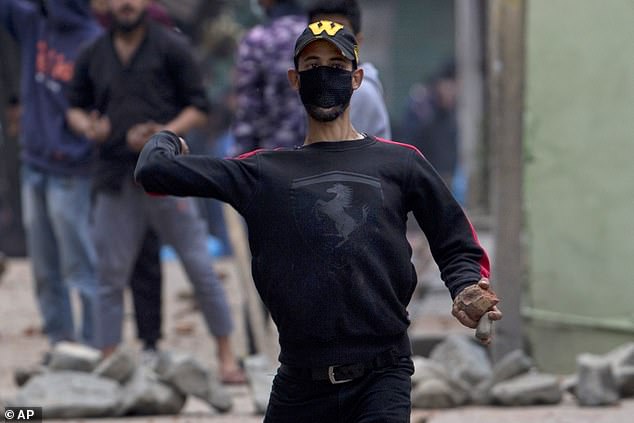 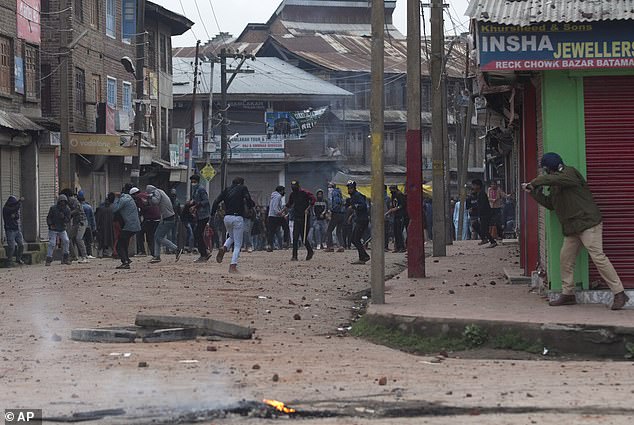 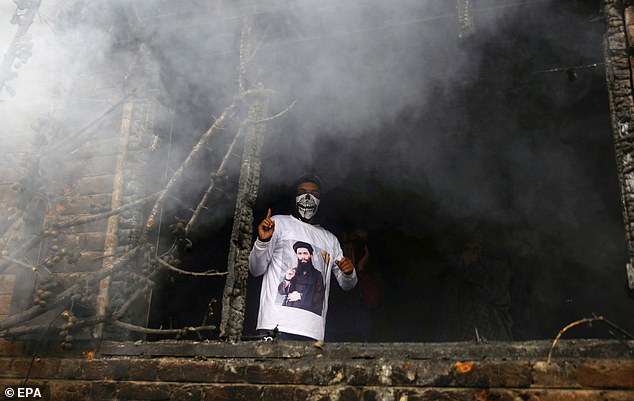 A young man wears a skeleton mask and shirt depicting a picture of militant commander Zakir Musa, as he stands inside of a damaged house – where Musa is believed to have been killed 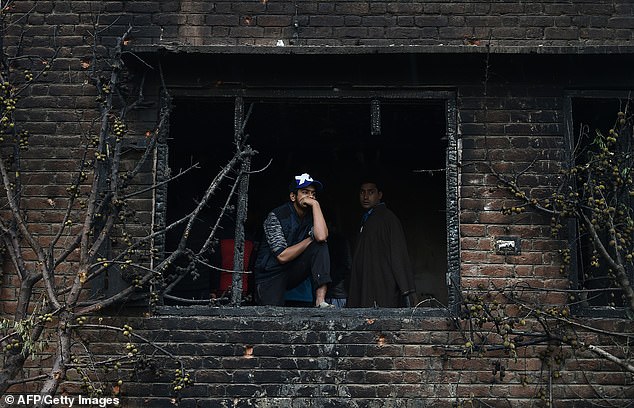 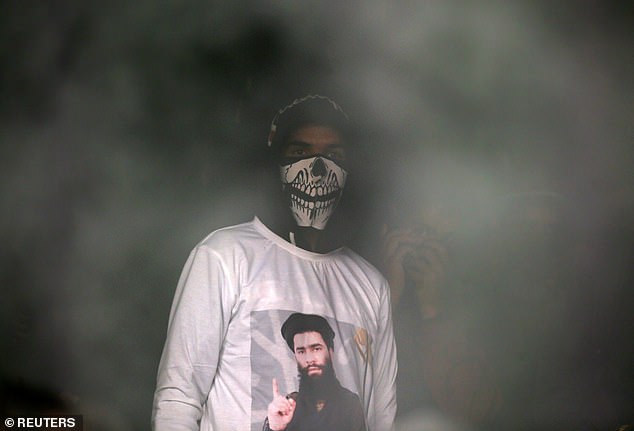 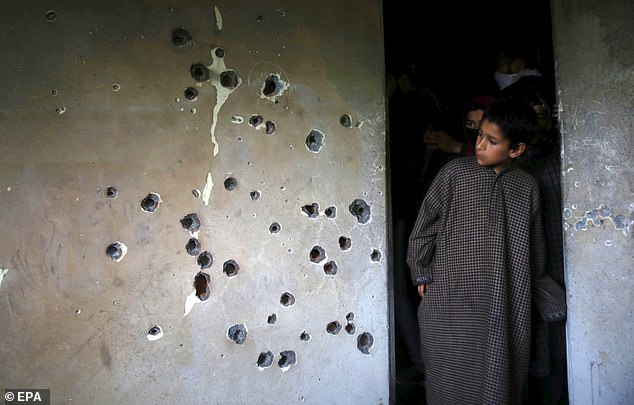 A Kashmiri boy looks at bullet-holed wall of a damaged house where militant commander Zakir Musa was killed at Dadsara village in Tral, south of Srinagar 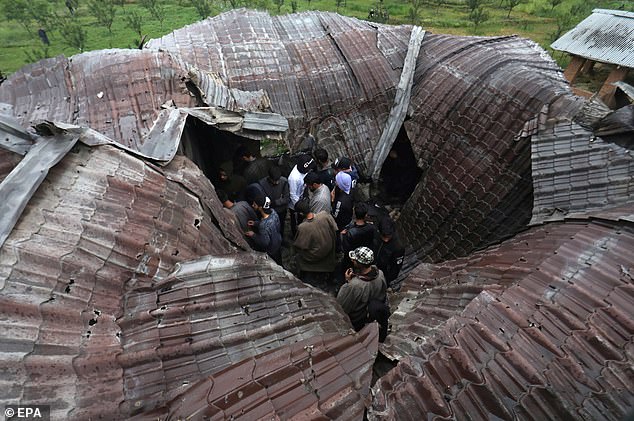 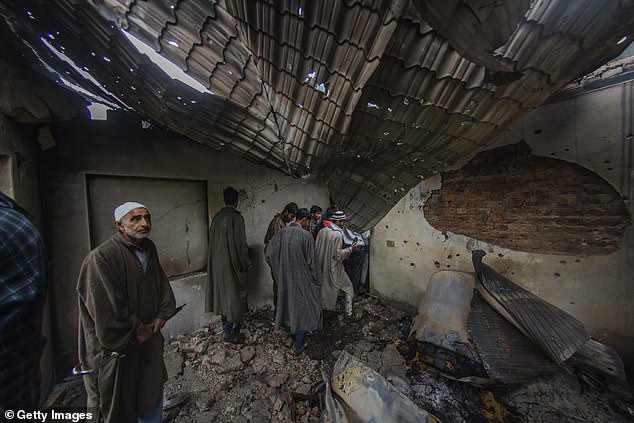