The mystery of the 1957 gay wedding photographs: Philadelphia archivists search for couple in black and white pictures 60 years after a drugstore owner deemed them ‘inappropriate’

The happiness was etched on faces of the two grooms holding hands during their vows, as they ceremoniously cut the cake, shared their first kiss, opened presents and danced with friends.

But while the occasion was joyous, the shadow of 1950s America, where gay rights were unrecognized and legal same-sex marriage was many decades away, was present. The window shades at the apartment remained firmly shuttered. Nonetheless, like most couples do, one of the men took the photos to the neighborhood drug store to be developed sometime in 1957.

As far as Bob Skiba knows, the man never came back to his local shop to pick the photos up. Skiba, a curator with the John J Wilcox Jr Archives of Philadelphia, which now owns some of the photos, said the store owner had deemed them ‘inappropriate’ because there were shots of two men kissing. However, an employee kept hold of them.

‘She thought if she held on to them, she would recognize them and be able to get the photos to the rightful owner,’ Skiba told DailyMail.com.

But that never happened. 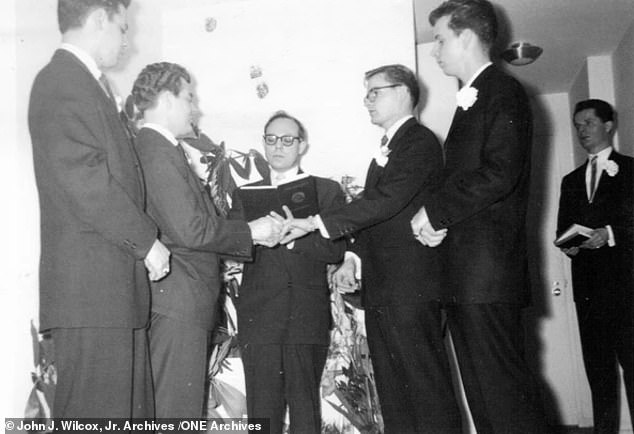 For the past six years, there has been a search for the men, above getting married in the 1950s, after photos that were squirreled away for decades were found and then sold on eBay in 2013. Someone bought the photos and gave some of them to the John J Wilcox Jr Archives of Philadelphia. Another part of the set was given to the ONE Archives at the University of Southern California Libraries 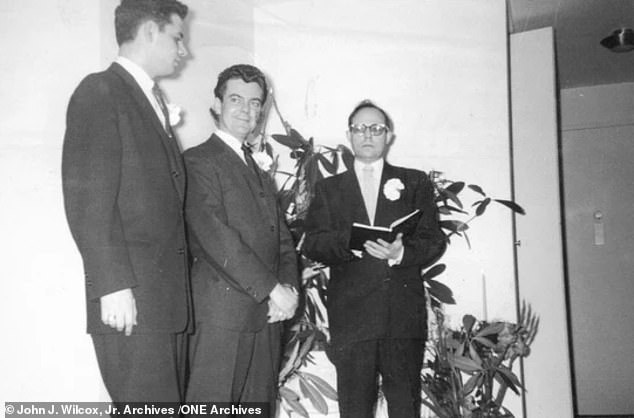 Bob Skiba, a curator with the John J Wilcox Jr Archives of Philadelphia, told DailyMail.com that despite some publicity from the media, they have not gotten any tips that have identified any of the men in the photos or where the ceremony took place. Above, the groom waits at the beginning of the wedding 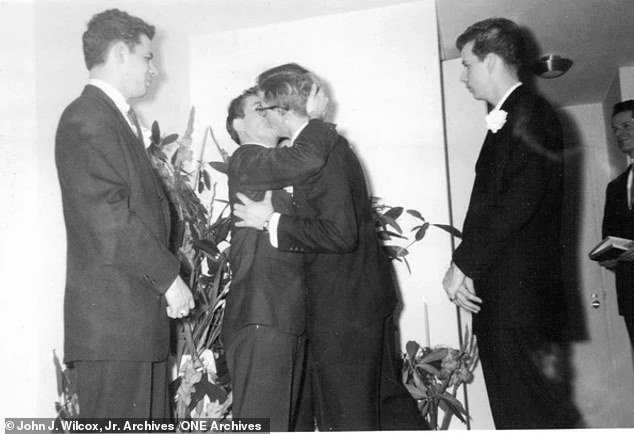 One of the men took the photos to a neighborhood drug store in Philadelphia to have them developed. But as far as Skiba, the Wilcox Archive curator, knows, he never came back to his local shop to pick up them. The store manager, he said, had deemed them ‘inappropriate’ because there were shots of two men kissing, like above. However, an employee kept them 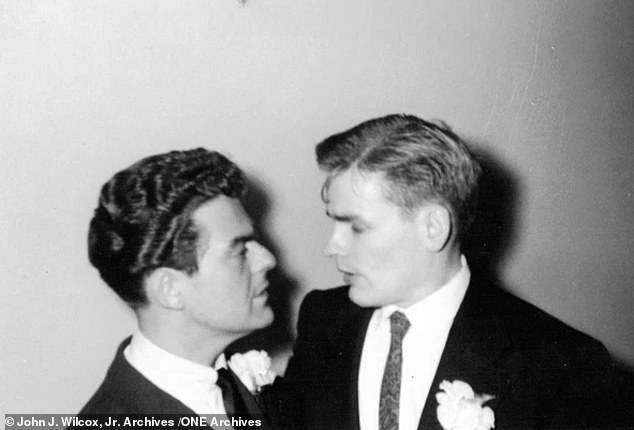 ‘She thought if she held on to them, she would recognize them and be able to get the photos to the rightful owner,’ Skiba told DailyMail.com. But that never happened, and she kept them at her house. Upon her death, her daughter sold them on eBay in 2013, and the person who bought them gave some of the images to the John J Wilcox Jr Archives of Philadelphia. Above, a photo of the couple, festooned with boutonnieres

For decades, the 21 images languished in her home until she died sometime before 2013. Her daughter found the pictures and sold them on eBay that year, and whomever bought them gave part of the set to the Wilcox Archives. Another part of the set was given to the ONE Archives at the University of Southern California Libraries, Skiba said.

Soon after, the search for the men in the pictures began.

‘We’ve been looking for these people for six years,’ Skiba said.

So far, they have received no information that identifies anyone in the photos or where the ceremony took place.

‘The most important thing is that gay people have refused to be invisible,’ said Skiba. ‘I like ensuring that these stories get told.’

Restrictive sodomy laws have existed in the United States since its earliest history, though enforcement and punishment of those statutes waxed and waned over the coming centuries.

In 1779, Thomas Jefferson proposed a new bill to the Virginia state legislature that would see brutal and harsh punishments for those found guilty of sodomy. He proposed that men would be penalized by castration,  while women engaged in lesbian relationships could be punished ‘by cutting thro’ the cartilage of her nose a hole of one half inch diameter at the least.’ At the time, Jefferson’s amendments to the state law were considered ‘light’ in comparison to their status quo, which prescribed death as the maximum penalty. His bill was rejected by the Virginia state legislature.

By the 1950s, America was in the crucible of Senator McCarthy’s ‘lavender scare.’ The Wisconsin senator’s homosexual witch hunt led to the firing of thousands of government employees based on their sexual preference. Fledgling gay and lesbian rights organizations, such as the Mattachine Society and the Daughters of Bilitis, began to organize and be more proactive in expressing their voice. 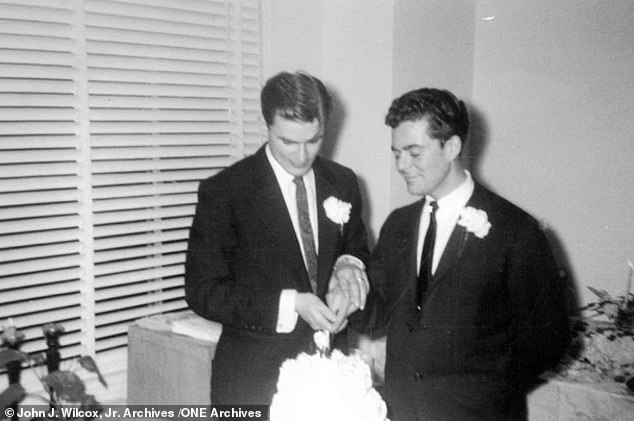 Once both the archives had the photos, the search began for the men but thus far, they have not gotten information that identifies anyone in the photos or where the apartment, where the ceremony took place, was, said Bob Skiba, a curator with the John J Wilcox Jr Archives of Philadelphia. Above, the couple cuts the cake 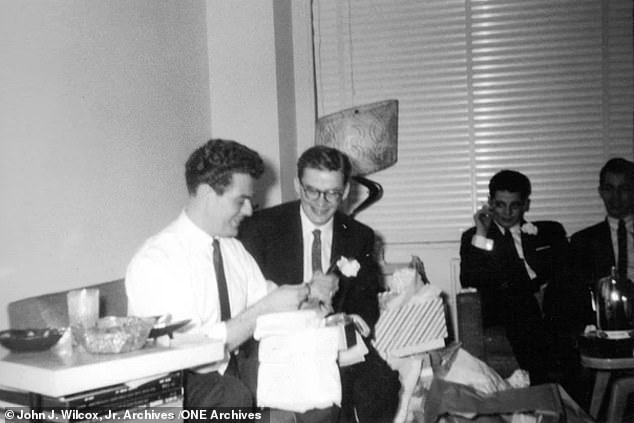 The 1950s was a conservative time period in the United States. There were real fears of a nuclear war and world annihilation. Communism and the Cold War with the then Soviet Union led to both the ‘Red Scare’ – the hunt for Communists – and the ‘Lavender Scare,’ which was those who were gay and lesbian were fired from their jobs in the government because they were ‘security risks.’ Above, the traditional opening of presents after the ceremony 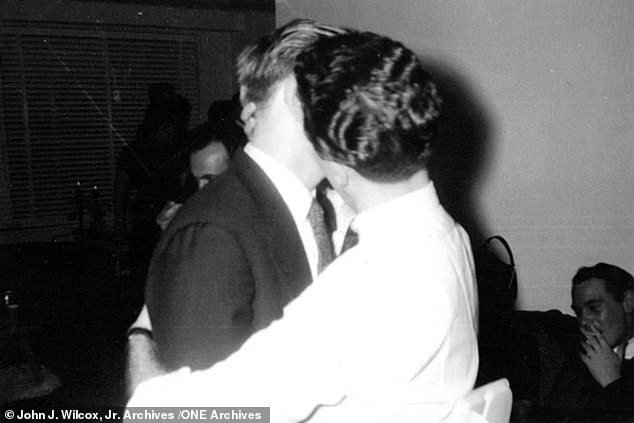 The gay rights movement was catalyzed after the Stonewall Riots of 1969. The riots broke out after the police conducted an early morning raid of the long standing sanctuary for the LGBT community. Above, a photo of the couple embracing 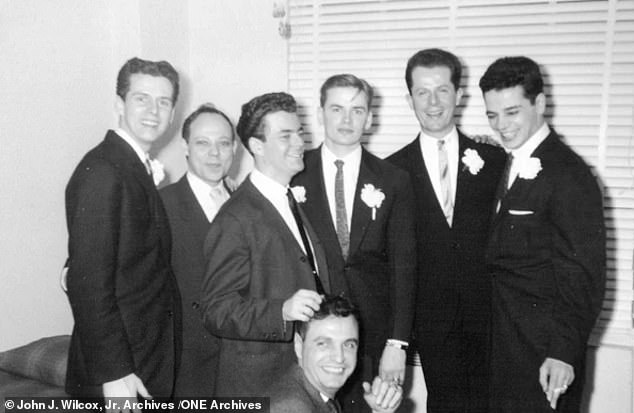 P J Palmer, a Hollywood producer working on the forthcoming series about these photographs said his purpose is: ‘…about restoring an erased history while uncovering truths about ourselves and our collective past.’ Above, the couple with their friends 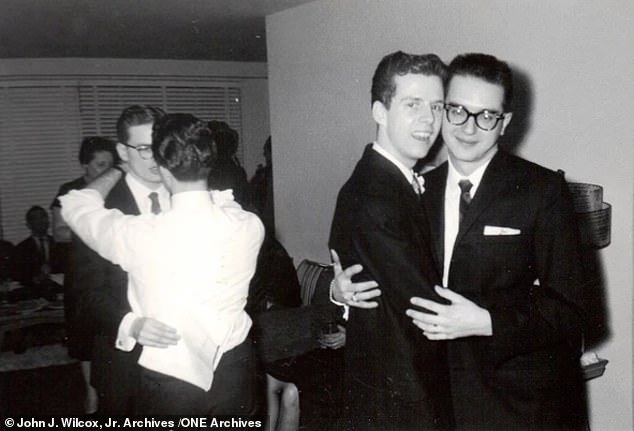 ‘The moment we saw these photographs we were deeply moved by the bravery of these men who, despite sodomy laws at the time chose to document their love,’ said Hollywood producer Neal Baer, who is currently developing a series on the topic titled The Mystery of the 1957 Gay Wedding Photos. Above, people dancing and celebrating after the ceremony

In 1962, Illinois became the first state to remove criminal penalties for ‘consensual sodomy’ from its penal code, but there had been little national progress toward equality in the seven years following.

The gay rights movement officially galvanized in 1969 when the Stonewall Riots broke out at in New York City after the police conducted an early morning raid of the establishment that long served as a sanctuary for the LGBT community during the endless winter of oppression and discrimination. In the immediate wake of the protests, the gay community formed the Gay Liberation Front – the driving force that would eventually lead to triumphs of the gay rights movement.

For years, states would slowly begin to follow Illinois’ lead with steps toward the decriminalization of gay relationships but the penalties for violating a sodomy laws varied between jurisdictions. The most severe penalties were in Idaho, as recent as 2003, where a person convicted of sodomy could receive a life sentence.

But on June 26, 2015, the Supreme Court held in a 5–4 decision that required all states to grant and recognize same-sex marriages. The landmark decision was a victory long in the running for the LGBT community who fought tirelessly for the decriminalization of their sexuality.

Of that day, President Barack Obama said: ‘Progress on this journey often comes in small increments, sometimes two steps forward, one step back, propelled by the persistent effort of dedicated citizens. And then sometimes, there are days like this when that slow, steady effort is rewarded with justice that arrives like a thunderbolt.’ 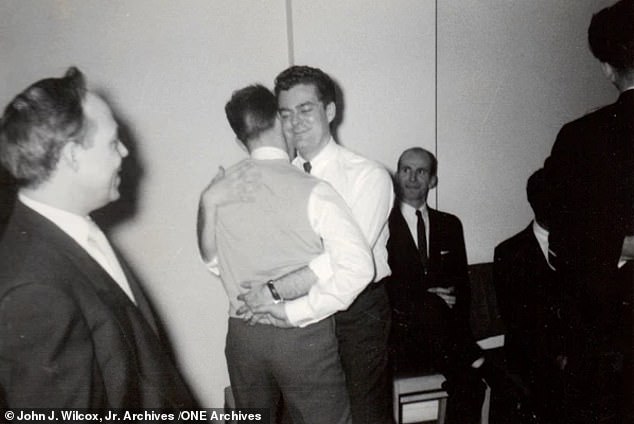 Up until same-sex marriage was legalized in 2015, members of the LGBT community were restricted to ‘domestic partnerships’ as a means to be recognized in the eyes of the law. Above, a couple dances 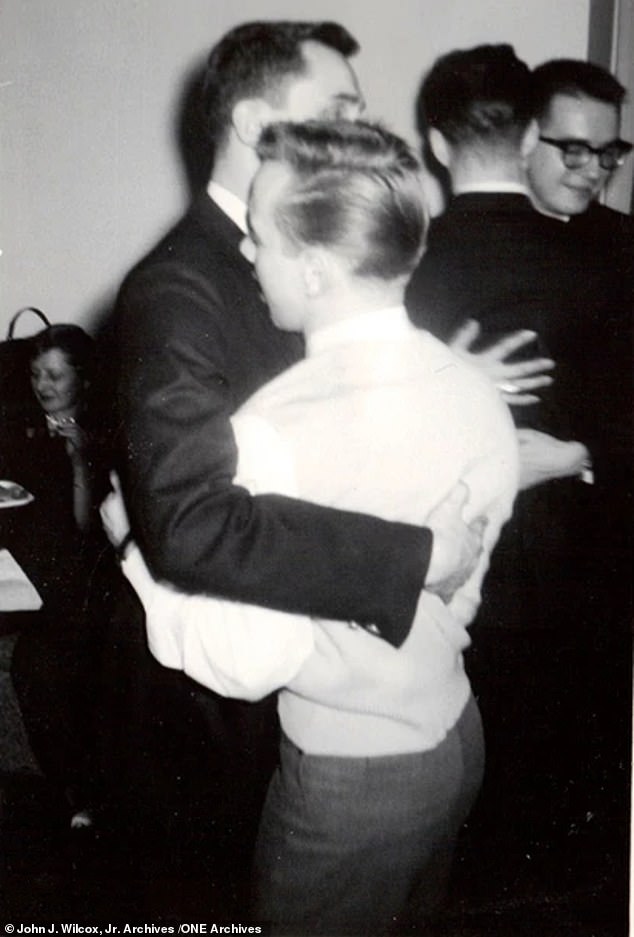 Long before the decriminalization of homosexuality in the United States, Thomas Jefferson proposed a bill to the Virginia State Legislature in 1779 that made homosexuality a crime punishable with castration. His bill was rejected for being too lenient because at the time sodomy was punishable by death 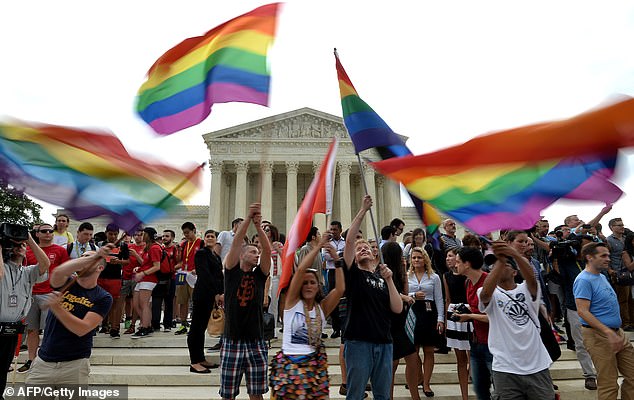 Of the landmark June 25, 2015 Supreme Court decision that legalized same-sex marriages, President Barack Obama said: ‘Progress on this journey often comes in small increments, sometimes two steps forward, one step back, propelled by the persistent effort of dedicated citizens. And then sometimes, there are days like this when that slow, steady effort is rewarded with justice that arrives like a thunderbolt.’ Above, a photo of the joyous occasion 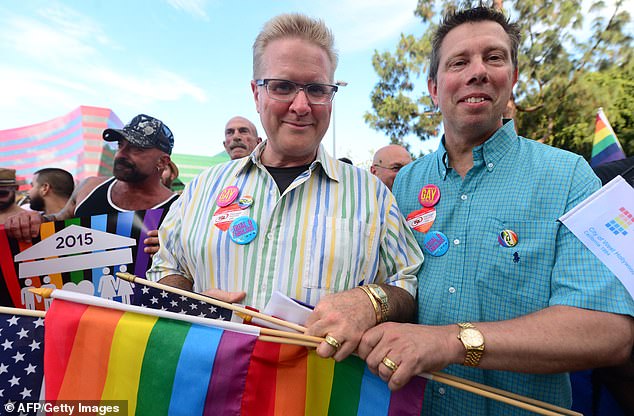 After a 5-decade-long, tireless fight for equal rights, a married couple partakes in a West Hollywood, California street celebration one day after the Supreme Court legalized same-sex marriage 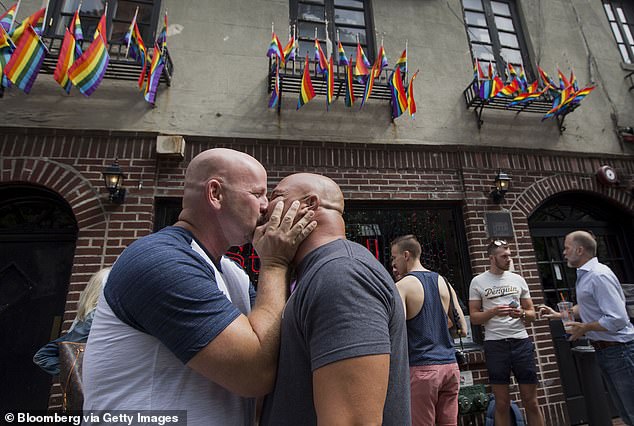 A couple shares a kiss outside the historic Stonewall Inn in celebration of the U.S. Supreme court that gave same-sex couples the constitutional right to marry nationwide. In 2004, the Stonewall Inn was listed as a National Historic Landmark, it is the first LGBTQ-associated property to be put on the register