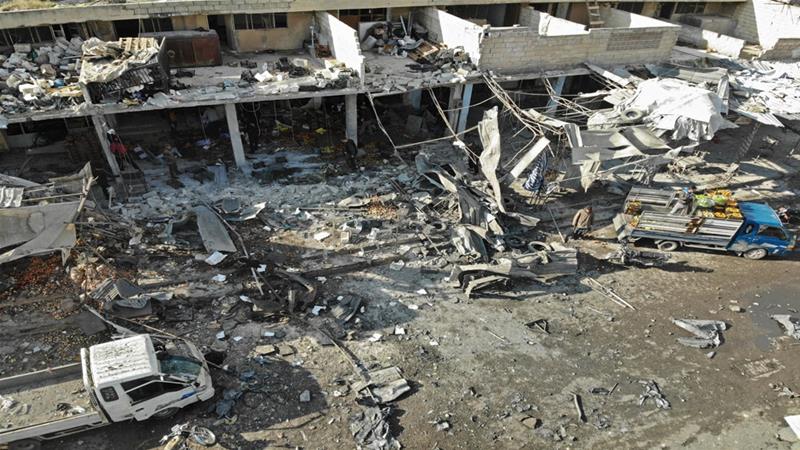 At least 10 civilians have been killed in Syrian government air raids on rebel-controlled towns in the country’s northwest, according to rescue workers who operate in opposition-held areas.

The Syrian Civil Defence, also known as the White Helmets, said the raids targeted two separate vegetable markets in the towns of Maaret al-Numan and Saraqeb on Monday.

“A while later, at around 10:30am (08:30 GMT), a second round of attacks struck the market in Maaret al-Numan, resulting in casualties and in material damages as well,” he said.

Maher Mohammed, 35, a vendor in the Maaret al-Numan market, said it was the most frightening bombardment he had witnessed in years.

“We ran inside the shops and threw ourselves on the ground,” the father of five told the AFP news agency.

“They bombarded half the market. Our neighbours were killed,” as were two women in a car who had come to do some shopping, he said.

There was no immediate mention of the air raids on Syrian state media.

The attacks came at a time when the markets were at their “busiest”, the Civil Defence said in a Twitter post.

So far 9 civilians, including two women, have been killed and 13 injured, after regime warplanes targeted the vegetable market in #MaaretalNouman this morning. A horrific massacre and massive destruction has been caused by the raid during the busiest time in this crowded market. pic.twitter.com/zHBNSOUmBG

While rescue operations were ongoing in the two areas, Sheikho added that government air raids also targeted a detention facility in Idlib city, though no casualties were immediately reported.

The Turkish defence ministry put the death toll from the attacks on the two marketplaces at 14, according to a statement posted on its official Twitter account.

The #Syrian #regime’s inhumane #airstrikes causing the deaths of innocent civilians in #Idlib are continuing. In airstrikes conducted on two crowded marketplaces and other crowded areas, 14 civilians including #children and women were killed, and more than 27 were wounded. #Syria pic.twitter.com/xHxhsYRGYG

Russia, which supports al-Assad, and Turkey, a longtime a backer of opposition factions, had cosponsored a de-escalation agreement for the area earlier this year that has since faltered.

Since late April, Syria and Russia have escalated their bombardment of the area, with more than 1,000 civilians killed in the hostilities, according to the United Nations.

Hundreds of thousands of Syrians have been displaced since the escalation began.

The Syrian troops on the offensive have recently captured rebel-held areas in the adjoining Hama province, as well as the town of Khan Sheikhoun in Idlib.

They are now seemingly pushing north, towards the town of Maaret al-Numan, which sits on the M5 highway linking Damascus with the northern city of Aleppo.

The Syrian government has been battling to take control of the strategic highway, a move that would allow it to connect cities under its control and boost trade.

A ceasefire announced by Moscow on August 31 has reduced air raids, but skirmishes on the ground have continued.

The region is home to nearly three million people, half of whom were transferred there en masse from other areas that were taken by pro-government forces.

The war in Syria has killed hundreds of thousands of people and displaced millions since it erupted in 2011 with the repression of anti-government protests.