Twitter users blasted the First Minister’s ‘illogical’ move to tighten restrictions, the latest in a series of measures slammed for ‘killing Scotland’s businesses’.

The Scottish Beer & Pub Association led the hospitality industry’s fury at Sturgeon’s clampdown, warning pubs and brewers in the areas will be forced to close.

The Big Issue Magazine in Scotland warned that many of its vendors – who are homeless – will be unable to sell from Friday at 6pm, when the restrictions kick in.

And the Betting and Gaming Council warned that the ‘disappointing’ move to curb the spread of coronavirus will force the closure of betting outlets in the 11 areas.

Sturgeon said the council areas, which include Glasgow and covers 2.3 million people, will be subject to Level 4 restrictions by the end of this week.

People living in Level 4 areas are banned from meeting with other households indoors while all non-essential shops must close.

The Big Issue Magazine in Scotland warned that many of its vendors – who are homeless – will be unable to sell from Friday at 6pm, when the restrictions kick in 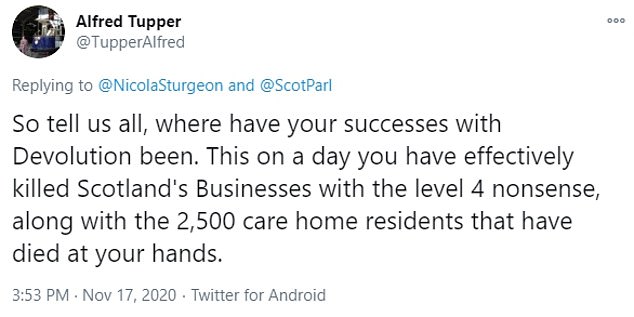 Twitter users blasted the First Minister’s ‘illogical’ move to tighten restrictions, the latest in a series of measures slammed for ‘killing Scotland’s businesses’ 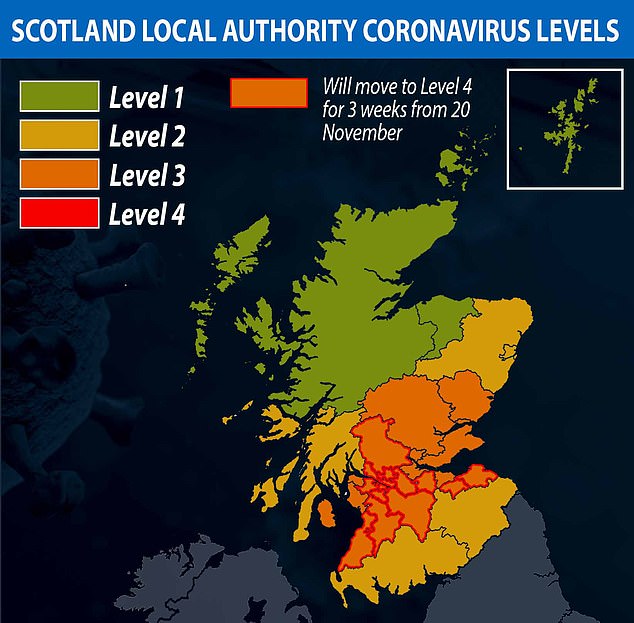 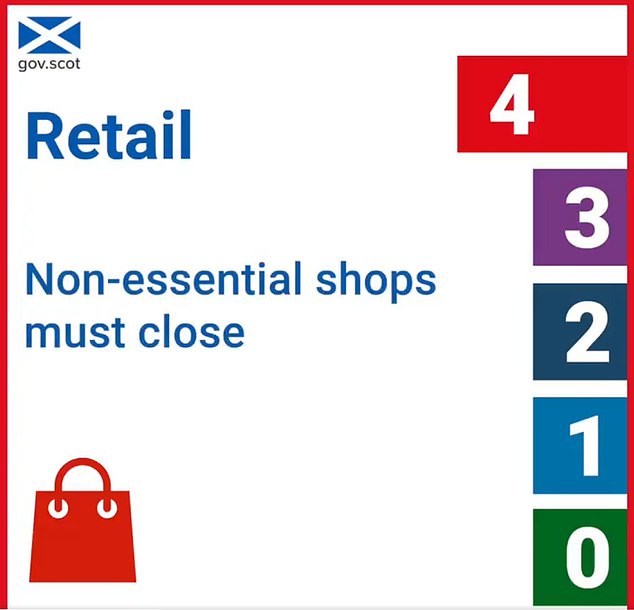 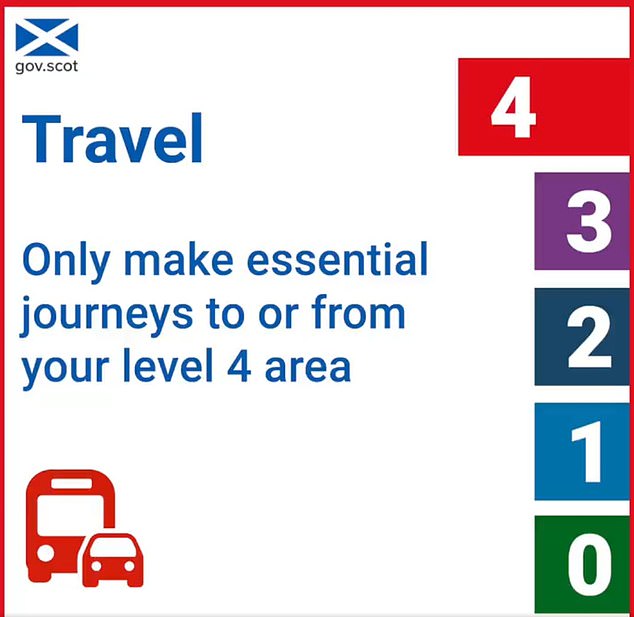 The SNP leader also announced she is making it illegal for people to travel into or out of Level 3 and Level 4 areas ‘except for certain essential purposes’.

There is already guidance in place which urges people not to make such journeys but Sturgeon said the advice will become law from Friday, raising the prospect of rule-breakers facing enforcement action from the police.

In a statement, Emma McClarkin, chief executive of the Scottish Beer & Pub Association, said: ‘The ‘Level 4’ measures announced for significant parts of Scotland by the First Minister today are of huge and immediate concern to our sector, as they place yet more pressure on Scottish pubs and brewers.

‘For many, these latest restrictions could see them close their doors for the last time.

Which parts of Scotland are subject to which lockdown level?

‘Getting Government financial support to pubs and brewers in Scotland affected by these latest measures must be the absolute priority now.

‘The current support is woefully inadequate and unless significantly improved, will see more of Scotland’s pubs close their doors for good.

‘Clarity must also be given well ahead of the Christmas holidays, as being unable to operate during this period will see many businesses forced to cease trading until at least spring of 2021.’

He said: ‘We recognise the Scottish Government finds itself having to deal with a very challenging environment, and to strike the tough balance between public health and the economy, but in those areas entering Tier 4 this will likely be a death knell for many Night Time Economy Businesses.

‘The restrictions are disproportionate to traceable transmission rates in the sector, and will further exacerbate an extremely tough financial environment for the industry. Significant further financial support for those businesses affected is urgently required, as furlough will become ineffective if operators have to close permanently. Businesses are running out of time.’

Responding to the announcement, one Twitter user said: ‘Gyms closed despite hardly any cases resulting from them being open. Sturgeons’ only reference to mental health was the old if you need someone to talk to bla bla bla.

‘This government is either uneducated or don’t care about how vital exercise is to mental health. Freezing cold temperatures and dark cold early nights, Scotland is one of the most depressing places in the world during winter.

‘Catastrophic and senseless decision to have gyms closing in Level 4’.

Another said: Cant u/s the logic in the varied restrictions across Scotland.

‘I live in a Level 4 area as of Fri (tightest rules) but I’m taking public transport to both Level 3 & 2 areas for work, mixing w/others on buses, out/indoors. Surely the risk is there regardless of reasons for travel?’

‘So tell us all, where have your successes with Devolution been,’ they asked.

‘This on a day you have effectively killed Scotland’s Businesses with the level 4 nonsense, along with the 2,500 care home residents that have died at your hands.’

The Big Issue Magazine in Scotland tweeted: As @NicolaSturgeon announced this afternoon, some areas in Scotland will be going into a level 4 lockdown.

‘This means that as of Friday, many of our vendors will be unable to sell. They will be out until 6pm on Friday so help support them if you can and buy a copy’.

Huw Edwards, boss of ukactive, said: ‘We are deeply concerned to hear that gyms and leisure facilities will be forced to closed again in a number of areas in Scotland under the new Level 4 regulations announced today by the First Minister.

‘We recognise the challenging decisions the Scottish Government has to make during this pandemic but our evidence shows that closing the fitness and leisure sector will only serve to exacerbate health issues and inequalities in our communities. 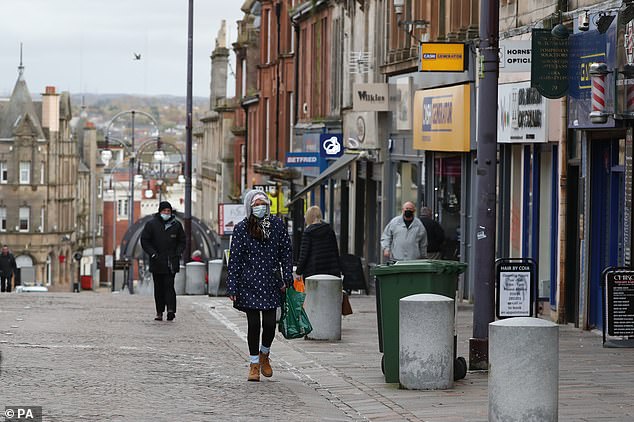 The Scottish Beer & Pub Association led the hospitality industry’s fury at Sturgeon’s clampdown, warning pubs and brewers in the areas would be forced to close (pictured,  view of Hamilton, Lanarkshire, which will be forced into Level 4 shutdown) 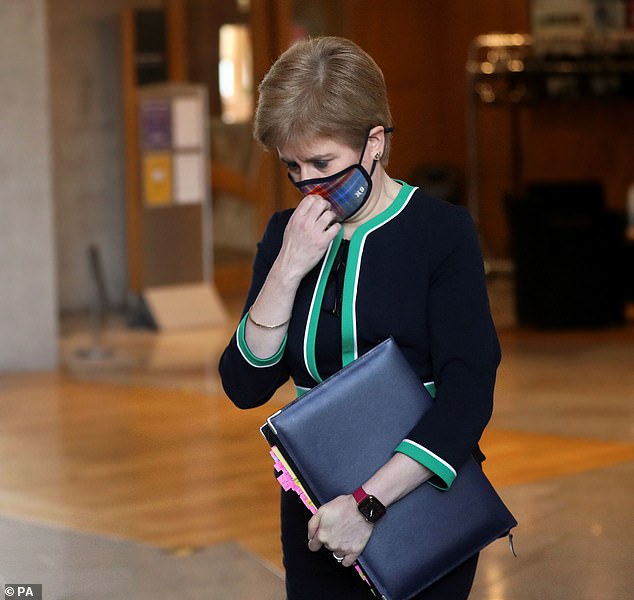 ‘Gyms and leisure facilities should be classified as a safe and essential service, and permitted to remain open in order to play their role in maintaining people’s physical and mental health in the face of this crisis.

‘The data we have collected from more than 1,900 sites across the UK shows our sector is undertaking the highest levels of reporting and controlling cases of COVID-19 among customers, which have been limited thanks to the highest standards of cleanliness, social distancing and safety.

‘ukactive remains in regular contact with the Scottish Government and local authorities, in order to provide the best possible evidence to inform decisions about the sector.

‘We are committed to supporting our members in Scotland throughout this challenging time and to working with the Government to ensure our members receive the tailored financial and regulatory support required for their survival and recovery.’

In a statement, the Betting and Gaming Council (BCG) said: ‘The BGC totally helps the Scottish Authorities’s efforts to sluggish the unfold of Covid-19.

‘However, this can be very disappointing for workers and prospects that betting outlets in these council areas will now sadly have to shut, not least due to the wonderful anti-Covid measures which have enabled them to function safely since they re-opened in the summertime.’

Earlier today, Sturgeon said there was ‘grounds for continued and significant concern’ in all of the areas being moved into to Level 4.

As well as the 11 areas being elevated to the top tier, two areas are being moved from Level 3 to Level 2 while 19 will experience no change.

The tightening of the rules in many areas in Scotland will inevitably lead to increased scrutiny of Boris Johnson’s lockdown plans for England.

The nation-wide shutdown is due to end on December 2 with ministers aiming to move back to a tiered-approach which health officials have suggested is likely to be tougher than the Government’s old three-tier system.

The lockdown comes just a week after tt was revealed the UK could get 40 million doses of the new Covid-19 vaccine by Pfizer and BioNTech after early results from the clinical trial suggested it was 90 per cent effective.

Stock markets around the world surged last week when Pfizer and BioNTech revealed early results from a massive clinical trial suggested nine out of 10 people who get their jab are protected by it.

The PM’s spokesman cautioned that there were ‘no guarantees’, but branded the results ‘promising’ and held out the prospect of millions of doses of the vaccine being in circulation by Christmas if it wins approval.

‘In total, we’ve procured 40million doses of the Pfizer candidate vaccine, with 10million of those doses being manufactured and available to the UK by the end of the year if the vaccine is approved by the regulators,’ the spokesman said.

The jab needs to be taken in two shots, meaning the five million doses will only vaccinate two-and-a-half million Brits.

The Health Secretary hailed both Pfizer and Moderna’s vaccine trial results as a ‘candle of hope’, but warned the UK’s high infection and death rates made it ‘painfully clear the virus remains a potent threat’.

Moderna’s results show 95 out of more than 25,000 participants caught the coronavirus in the trial. Only five out of the 95 had actually been given the vaccine, while the other 90 were in a placebo group and given a fake jab.