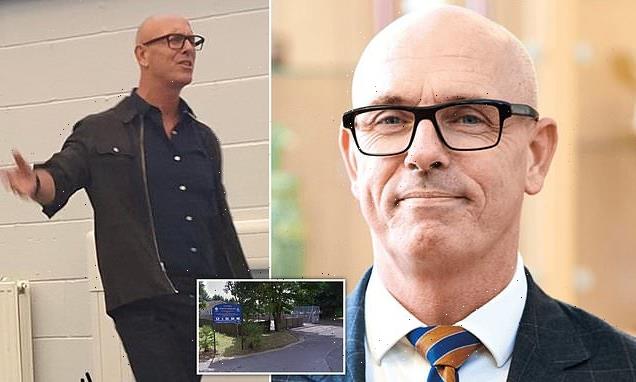 A secondary school which drafted in a former headteacher who held ‘silent’ assemblies has been rated inadequate by Ofsted.

‘Hitman’ Barry Smith, an education coach known for his controversial methods which has seen him dubbed Britain’s ‘strictest headteacher’, is understood to have been brought in as an ad hoc adviser at the Abbey School in Faversham, Kent for a few days in September.

Since then parents claim the secondary has become a strict ‘army camp’ where children are ‘terrified’ of going to school, and cannot get on with ‘learning’. They also said in on instance one of their children was punished for not walking normally into class.

Following Mr Smith’s visit, Ofsted rated the school the lowest possible rating, inadequate, from a previous award of good, in a report released on August 15, and highlighted that pupils feel ‘unsafe’ in the environment with ‘overly restrictive’ staff.

The education inspectors who visited in May – nine months on from Mr Smith’s visit – added: ‘Many pupils are unhappy and do not feel safe. They are not confident that staff deal with bullying effectively.’ 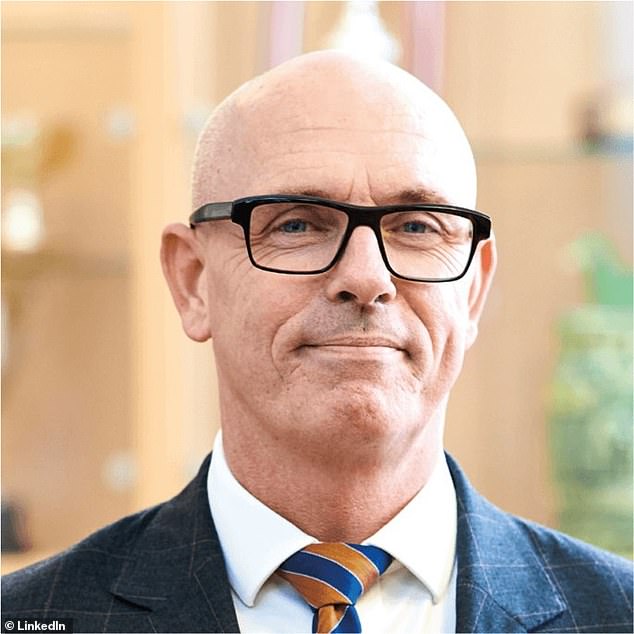 ‘Hitman’ Barry Smith, an education coach known for his controversial methods which has seen him dubbed Britain’s ‘strictest headteacher’, was brought in as an ad hoc adviser at the Abbey School in Faversham, Kent for a few days in September 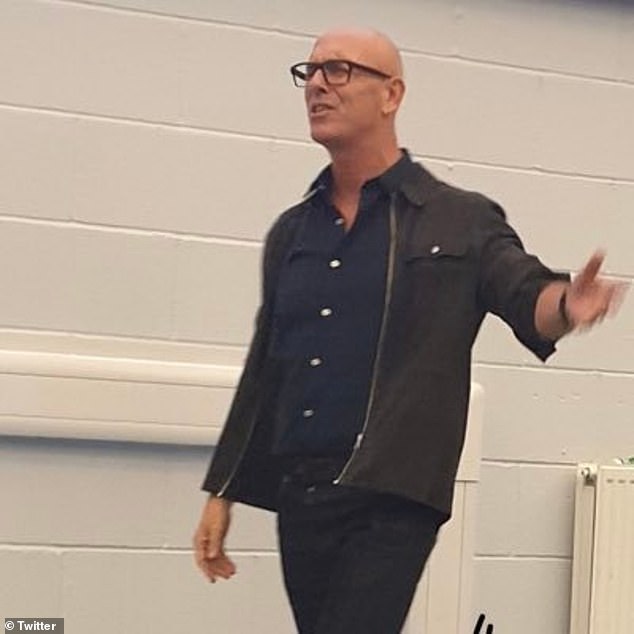 Since then parents claim the secondary has become a strict ‘army camp’ where children are ‘terrified’ of going to school, and cannot get on with ‘learning’. Pictured: Mr Smith

Mr Smith is a founding deputy at the Michaela Free School in north London, which is renowned for its strict approach to education, has faced criticism for ‘military-style’ rules that demand pupils fold arms when they speak and chant phrases about good behaviour.

Following him being parachuted in a parent, Rebecca Saunders, who has two children at the Abbey, claimed it had turned into an ‘army camp’.

The 40-year-old said in the wake of the latest Ofsted grading: ‘The kids don’t enjoy it there. They say it is like an army camp and they can’t just be themselves and get on with learning.

‘It should be their best years, and I know my children and others are struggling.

‘The strictest headteacher in Britain’: Pupils claim Barry Smith caused them to throw up in buckets, instilled a ‘mandatory smile’ regime and allegedly told them what haircuts they could wear

Education consultant Barry Smith, a founding deputy at the Michaela Free School in north London renowned for its strict approach to education, has previously faced criticism.

In 2017, Mr Smith took over a failing school before re-launching it as the Great Yarmouth Charter Academy, Norfolk.

It was reported his rules included telling pupils they couldn’t leave the room when they felt ill – and instead would be given buckets to throw up in.

He also ordered kids to be asleep at 9.30pm and up by 6.30am every day and instilled a ‘mandatory smile’ regime for children.

He allegedly even sent a letter to parents dictating what haircuts boys were and weren’t allowed to have.

At his next posting at Hackney New School in East London in February 2020, he once gave half the school detention and issued more than 7,500 detentions since the start of the last school year.

According to an ITV investigation, he called the children ‘detainees’ – and also punished those who didn’t smile or shuffled too much.

After his visit to Faversham, it was reported last October a group of friends were put into ‘isolation’ and given detention after arriving one minute late to school when their train was delayed.

People have said he made schoolkids fold their arms when they speak, recite chants about good behaviour, and even miss lessons to go to assemblies about discipline.

In an interview with the The Sun, he said ‘parents need to teach common courtesy’ to their children to ensure good behaviour.

‘When they make them go to isolation, they don’t do any work there so it is disrupting their learning.

‘If they weren’t so strict, they would be fine going to school. They are terrified of going there and getting into trouble over silly things.’

Karly Newman, who has a son at the school, says the report ‘sums up what everyone has been thinking and saying for a long time’.

‘There is no leeway and they don’t take into account different children’s needs,’ the 33-year-old said.

‘[The head teacher] needs to stop trying to run it as a military school. He is herding them all together.’

Laura Thomas, 44, who has a daughter in Year 7, told KentOnline in September 2021 that pupils were taken out of lessons to attend ‘discipline assemblies’ led by Mr Smith.

‘She asked me ‘why have we got to have the assemblies when we have to fold our arms and sit in silence?’,’ Mrs Thomas said.

‘They’re missing lessons to have these – yesterday she missed history, and maths the day before.

‘Apparently he makes them chant different phrases. I don’t know exactly what they’re saying, but apparently there are chants they have to say about how to behave.

‘I am very concerned about what he is doing to my child in the school.’

One mother also said that her son ‘got a correction for how he walked into class’.

‘Maybe he was acting daft, I don’t know,’ she said. ‘He says he wasn’t and just walked in normally.

‘But he is having physio on his knee at the moment and also has a fractured wrist and broken hand so carrying his bag isn’t easy.’

Inspectors then found in May that the majority of pupils ‘comply with leaders’ strict expectations of behaviour’, but said how they are implemented ‘does not contribute positively to the culture of the school’.

‘For the majority of pupils, these approaches are applied in a manner that is overly restrictive,’ they said.

Inspectors found that outside of lessons the ‘poor behaviour of some pupils’ made others ‘feel vulnerable’.

They added: ‘Leaders have not taken the right actions to address bullying or make sure that behaviour out of lessons is consistently good.

‘Additionally, leaders have not instilled trust in pupils, which means pupils feel that they cannot report their concerns and know that these issues will be addressed effectively.’

The Abbey was heavily criticised for inviting Mr Smith to the school by Kent education advisor Peter Read, who this week said ‘heads ought to roll’ in light of the latest Ofsted report.

He said: ‘They brought in a hitman, Barry Smith, who prided himself on being called the toughest head teacher in England, and children coming back to school faced an intense disciplinary method.’

While the school was given the lowest rating for both its leadership and management, and behaviour and attitudes, the quality of its education was graded good.

Inspectors found that staff had high aspirations for what pupils could achieve, and had acted quickly to address any impact on learning caused by the Covid pandemic.

In response to the report, head Dr Rowland Speller said: ‘The school will review its practices but the challenge it faces is creating an environment where the pupils can succeed both academically and socially.

‘With regard to the former, we have seen a big improvement in academic grades in the past five years since the last inspection.

‘Staff attribute this to reduced classroom disruption and more work being completed.

‘However with regard to the latter, we still haven’t got this completely right and the disruption caused by covid hasn’t helped.

‘We’re told trips and visits for pupils are returning to the school calendar which should add more enjoyment and fun to the learning experience.’ 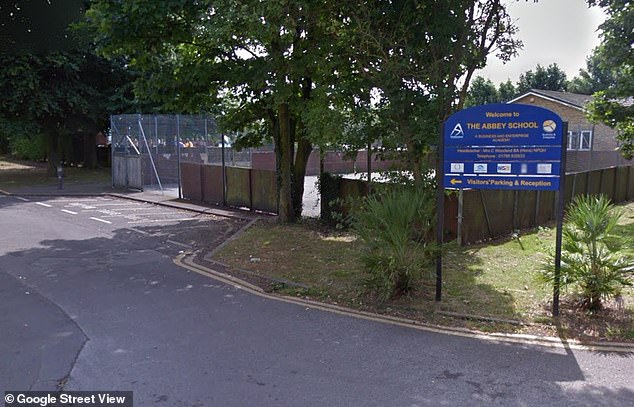 Following his visit, Ofsted rated Abbey School in Faversham, Kent (pictured) the lowest possible rating, inadequate, from a previous award of good, in a report released on August 15, and highlighted that pupils feel ‘unsafe’ in the environment with ‘overly restrictive’ staff

Dr Speller also said issues around bullying are important and additional assemblies and lessons had been introduced to focus on how students should treat each other.

He claimed: ‘I don’t think that all parents are doing what they should be.’

Mr Smith responded to the recent allegations, saying: ‘I introduce policies that develop a culture of genuine mutual respect.

‘Teachers are your boss, but we lead with kindness and courtesy. I expect kids to be as polite to us as we are to them.

‘The school Ofsted has described is not anything I would advocate as a policy. The school I saw did not sound like the school in the Ofsted report.

‘I encourage children to be polite and courteous. If I don’t encourage that, I’m encouraging the opposite.

‘I was there for five days. I can give advice, that’s all I can do. I don’t know what the school has done following my visit.

‘But I do think that the head is an honourable man who is trying to do the best for the staff and pupils.’

He added: ‘I go to schools to liberate children and teachers – adult authority is a good thing if it comes with the culture of genuine mutual respect.

‘All these silly expressions about me being army-like, militaristic – it’s all utter nonsense. Couldn’t be further from the truth.’