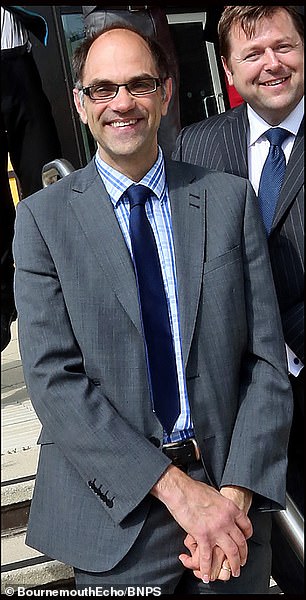 Headteacher Richard Tutt (on the left) is known for his ‘zero tolerance’ approach to discipline at the school.  For example the uniform policy stipulated, for example, that pupils could not leave the top button of a shirt undone, push up the sleeves of their blazer or wear coloured or patterned socks

A notoriously strict school has fined a parent who stopped her daughter taking part in two paid-for activity days held to ‘celebrate students hard work’ costing parents up to £40 a time.

Magna Academy in Poole, Dorset, cancelled lessons on the last two days of the summer term and instead arranged activities including skiing lessons and a visit to a water park.

But parents were expected to fund these outings, which cost up to £40 a go.

The mother of a 13-year-old girl did not agree with the two days of fun and kept her daughter off school, saying she found the costs ‘very expensive’ and unfair on families with less money.

She has since been contacted by the academy to tell her she will be fined £60 and her daughter will have to attend school on Saturdays to make up the lost time.

The parent, who did not wish to be named, said: ‘I would prefer to take my daughter to activities like this myself during the summer holiday and some of them are very expensive.

‘Those who don’t want to fork out a lot of money will be left walking around the heath or doing puzzles at school while their friends are skiing or doing water sports.

‘The school should have broken up last Friday. It is totally wrong that she’s being asked to make up the hours on Saturdays and I’ve been given a fine.

‘It’s absolutely ridiculous. One minute they’re being very strict, then the next they think it’s fine to cancel two whole days of lessons.’

The paid activities offered were ski lessons at £40 per day, Rockley Water Sports for £32, Altitude High Ropes at £18 for half a day and two hours at Splashdown for £11. 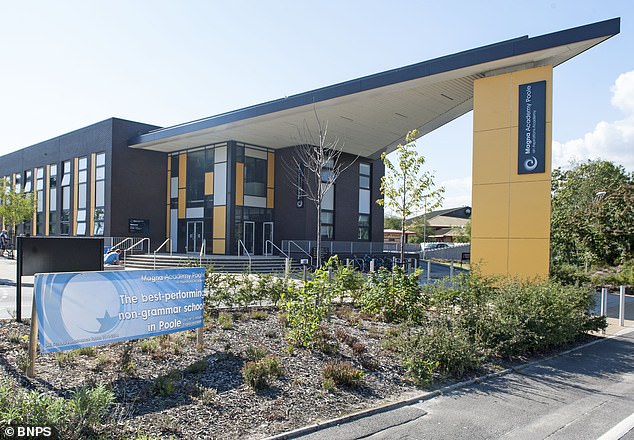 Magna Academy in Poole, Dorset, (pictured) cancelled lessons on the last two days of the summer term and instead arranged activities including skiing lessons and a visit to a water park

There was also the chance to go to the cinema for £5, bowling for £6 or £2 for rocket building.

A letter sent by Magna Academy to parents in May said they had suspended lessons for the final two days of the summer term to provide ‘enrichment activities’ for pupils in years 7 to 10.

It read: ‘To celebrate all our students’ hard work and excellent progress this year we will be running two activity days at the end of the summer term.

‘The normal timetable will be suspended and there will be two full days of extension and enrichment activities for all students, years 7-10.

‘Please read through these activities and descriptions and consider the cost involved.’

The school’s decision to fine the parent has met with criticism on social media, with some people labelling it ‘heavy handed’.

Jodie Windsor said: ‘This seems very heavy handed on the head’s part. Not all families will be able to afford for all of these trips.

‘If the school wish to enforce it then they should pay for these treats, using a heath clean as an appropriate alternative is unacceptable.

‘This come across as more of a deterrent and unfair for those families who would have to attend the free activities because of the costs.’

Liz Smith added: ‘This is ridiculous those parents with two or three children at this school would be hard pushed to find the money.’

The school has previously come under fire for its strict, zero-tolerance policy on behaviour.

Headteacher Richard Tutt inherited a school in crisis and in special measures.

In a damning report in 2012, Ofsted inspectors described how ‘low-level disruptive behaviour’ was contributing to poor teaching that resulted in pupils making progress in only a third of lessons.

In the previous year, fewer than half of pupils gained five GCSEs at grade A to C.

Mr Tutt brought in a range of tough new rules to turn the school around.

On his first day in 2013, 200 children who had been given a new uniform free of charge by the school were removed from class for breaching his blizzard of tough regulations setting out precisely what could and could not be worn, and exactly how each item of clothing should be worn.

Students must walk to lessons in silence and are removed from class if their pencil cases are too small and rulers too short.