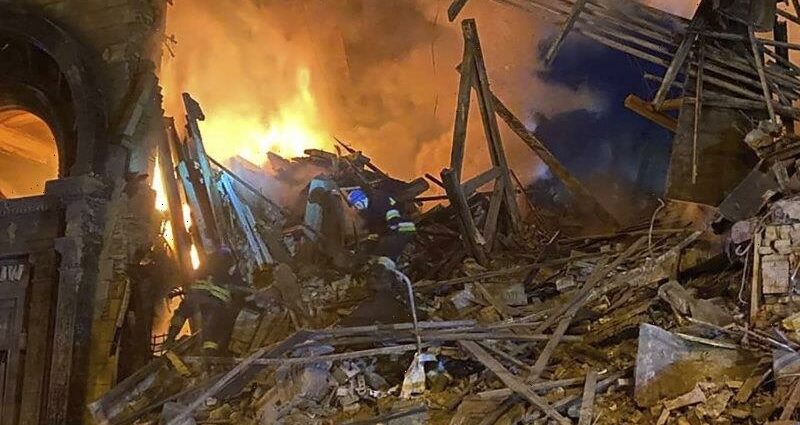 Bakhmut, Ukraine: A Russian missile demolished an apartment block in a Ukrainian region that Moscow says it has annexed, killing at least three people, as discontent mounted within Russia about the handling of the war by the top brass.

The missile attack on the city of Zaporizhzhia in the southern region of the same name left some people buried under the rubble, the regional governor said, and was a reminder of Moscow’s ability to strike targets even at a time when its forces have been pushed back in the south and east. 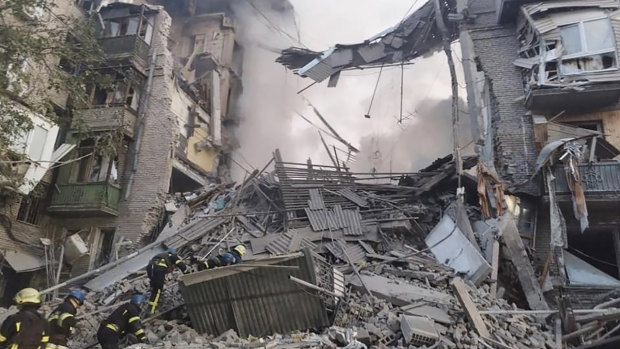 Rescuers work at the scene of a building damaged by shelling in Zaporizhzhia, Ukraine.Credit:AP

There was no immediate comment from Russia, whose invasion of Ukraine has begun to unravel after a Ukrainian counteroffensive in which thousands of square miles of territory have been retaken since the start of September, including dozens of settlements in recent days.

In a blow for Moscow, thousands of Russian troops have retreated after the front line crumbled, first in the northeast, and, since the beginning of this week, also in the south.

Public criticism of Russia’s top military officials, once taboo, is also mounting after two allies of President Vladimir Putin criticised what they said was the incompetent way the war was being prosecuted.

On Thursday, a Russian-installed official in occupied Ukraine openly mused about the idea of Sergei Shoigu, the defence minister and an ally of Putin, shooting himself for his military failures. 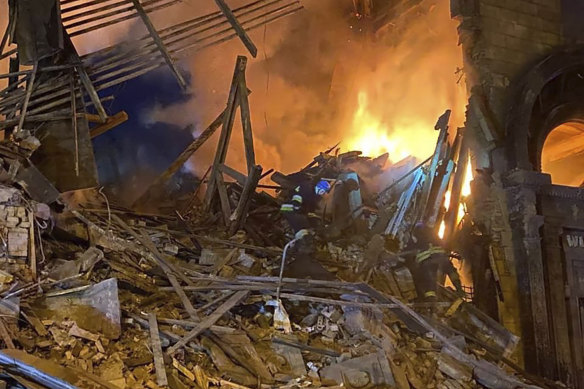 The aftermath of an explosion at a building in Zaporizhzhia, Ukraine.Credit:AP

“Indeed, many say: if they were a defence minister who had allowed such a state of affairs, they could, as officers, have shot themselves,” Kirill Stremousov, the deputy head of the Russian-installed administration in Ukraine’s Kherson region, said in a video.

There was no immediate comment from the defence ministry.

Discontent has begun to bubble up among even loyalist state TV hosts too.

“Please explain to me what the general staff’s genius idea is now?” Vladimir Solovyov, one of the most prominent Russian talk show hosts, said on his livestream channel. 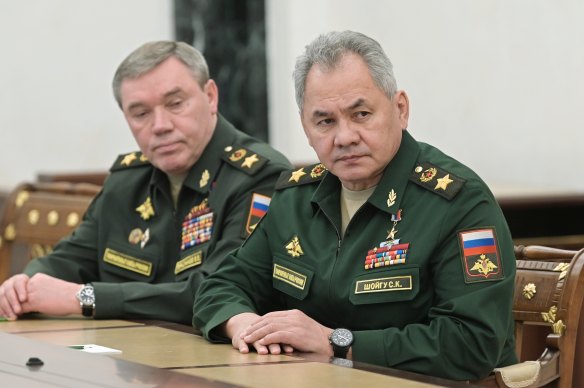 “Do you think time is on our side? They (the Ukrainians) have hugely increased their amount of weapons… But what have you done in that time?”

Images of the aftermath of Thursday’s missile strike showed a gaping, rubble-strewn hole where a terracotta-coloured five-storey apartment block used to stand next to a wine shop.

Reuters reporters saw firefighters bringing a father and son down a ladder and talking to an older man still trapped under rubble.

Eduard, a 49-year-old man who survived the attack, said he was woken at around five in the morning by a strong explosion. “The room filled with smoke and dust. I jumped up to go see what had happened,” he said.

Twelve people were wounded, including a three-year-old child, and five were still under the rubble, said Oleksandr Starukh, the governor.

In an online address to the European Political Community forum meeting in Prague, Ukraine’s President Volodymyr Zelensky accused Russia of deliberately targeting the same location in Zaporizhzhia twice in succession.

Moscow says it does not deliberately target civilians.

Kyiv called the new law, which seeks to incorporate about 18 per cent of Ukraine’s territory into Russia, the act of a “collective madhouse”.

Russia moved to annex the four regions after holding what it called referendums – votes that were denounced by Kyiv and Western governments as illegal and coercive.

Zelensky said on Wednesday that his army had retaken more settlements in the southern Kherson region and footage released from Kherson showed a Russian infantry fighting vehicle with a white piece of fabric wrapped around its gun barrel surrendering.

Ukraine’s military in the south said its forces had killed at least 58 Russian fighters and destroyed nine tanks.

Stremousov, the Russian-installed official in Kherson, said Ukraine’s advance in the area had been halted.

In the Kharkiv region in the northeast, a Ukrainian general said on Thursday that Kyiv’s forces had advanced up to about 55 km over the last two weeks.

Reuters could not immediately verify the reports.

In the east, Russian forces remained dug in around the battered city of Bakhmut.

Ukrainian multiple rocket launchers and artillery exchanged near constant fire on Thursday with Russian forces who have pummelled the area for months, prompting the flight of much of the pre-war population of 70,000.

The streets were largely deserted, though municipal workers were seen raking leaves into neat piles on one street, an incongruous scene in a city where street corners are strewn with rubbish and crumpled masonry.

“It is scary, but I actually don’t know how serious it is,” said Serhii, 70, who declined to give his last name, as crumps from artillery echoed. “You can’t get used to it.”