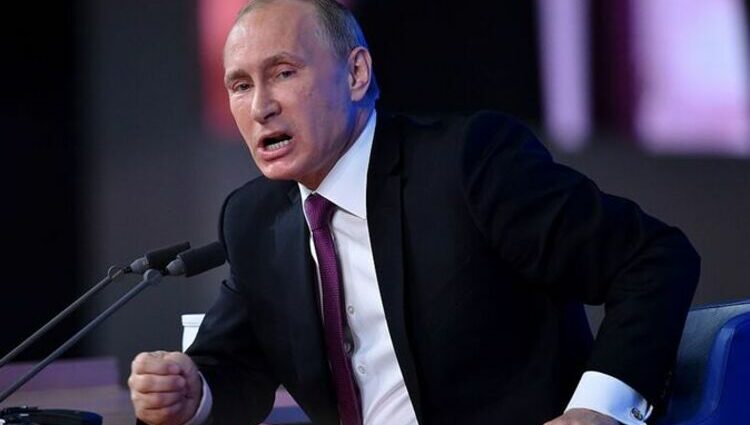 The Kremlin strongman has sought to justify his war of aggression against his neighbour as a campaign to “denazify” Ukraine and prevent a “genocide” of Russian speakers. By all accounts, Putin and his acolytes expected Ukrainians to turn against their government and welcome Moscow’s army with flowers and cheers. In particular, they expected a warm reception from Ukrainians living in the country’s eastern provinces, where Russian speakers make up the majority of the local population.

However, the reality has turned out to be very different, as Russian forces face fierce resistance from Ukraine’s army and hostility to the invasion from ordinary civilians.

He told CNN: “At first, what he wanted was to change the power in Kyiv, put in his puppet, and was expecting that this would be met with flowers thrown in the streets by Ukrainian people.

“The fact that the people in Kharkiv did not meet him with flowers, it not only just angered him, I really think it drove him literally insane.

“That’s when he started bombing Kharkiv and Kyiv.”

Mr Khordokovsky made his fame and fortune during the privatisation of state assets under President Yeltsin in the early 1990s.

He would go on to become one of the richest and most powerful men in Russia, until a catastrophic fallout with Putin in the early 2000s led to his imprisonment and spectacular fall from grace.

The former oil tycoon now lives in London and has become one of the most strident critics of the Russian leader.

The Russian exile urged oligarchs who have recently fled Russia to publicly condemn Putin and his war.

In an interview with the Washington Post, he warned them they risked being seen as complicit with the Putin regime if they stayed silent.

“If you have left, then you should publicly dissociate yourself.”

He added: “You should step up to the microphone and say that Putin is a war criminal and that what he is doing is a crime, that the war against Ukraine is a crime.

“Say this, and then we’ll understand that Putin doesn’t have a hold over you.”

Recent weeks have been an exodus of rich business people from Russia.

These include Mikhail Fridman and Pyotr Aven of Alfa Bank, as well as Anatoly Chubais, who was serving as Putin’s international envoy before the war.

Signs that sanctions may be actually consolidating support for Putin among his elites were reported by a leading Russian journalist with connections to the Kremlin’s inner circle.

Farida Rustamova said that the overriding feeling among Russia’s elites was that they had no choice but to stick with Putin.

In her Substack blog, she wrote: “In short, it can be said that, over the past month, Putin’s dream of a consolidation among the Russian elite has come true.

“These people understand that their lives are now tied only to Russia, and that that’s where they’ll need to build them.

“The differences and the influence of various circles and clans have been erased by the fact that, for the most part, people have lost their past positions and resources.”