HUNDREDS of thousands of Pro-Palestine protesters have taken to the streets in London – letting off flares, throwing missiles at cops and even burning an Israeli flag in the capital.

The crowds gathered in Hyde Park on Saturday afternoon for a rally in solidarity with the people of Palestine. 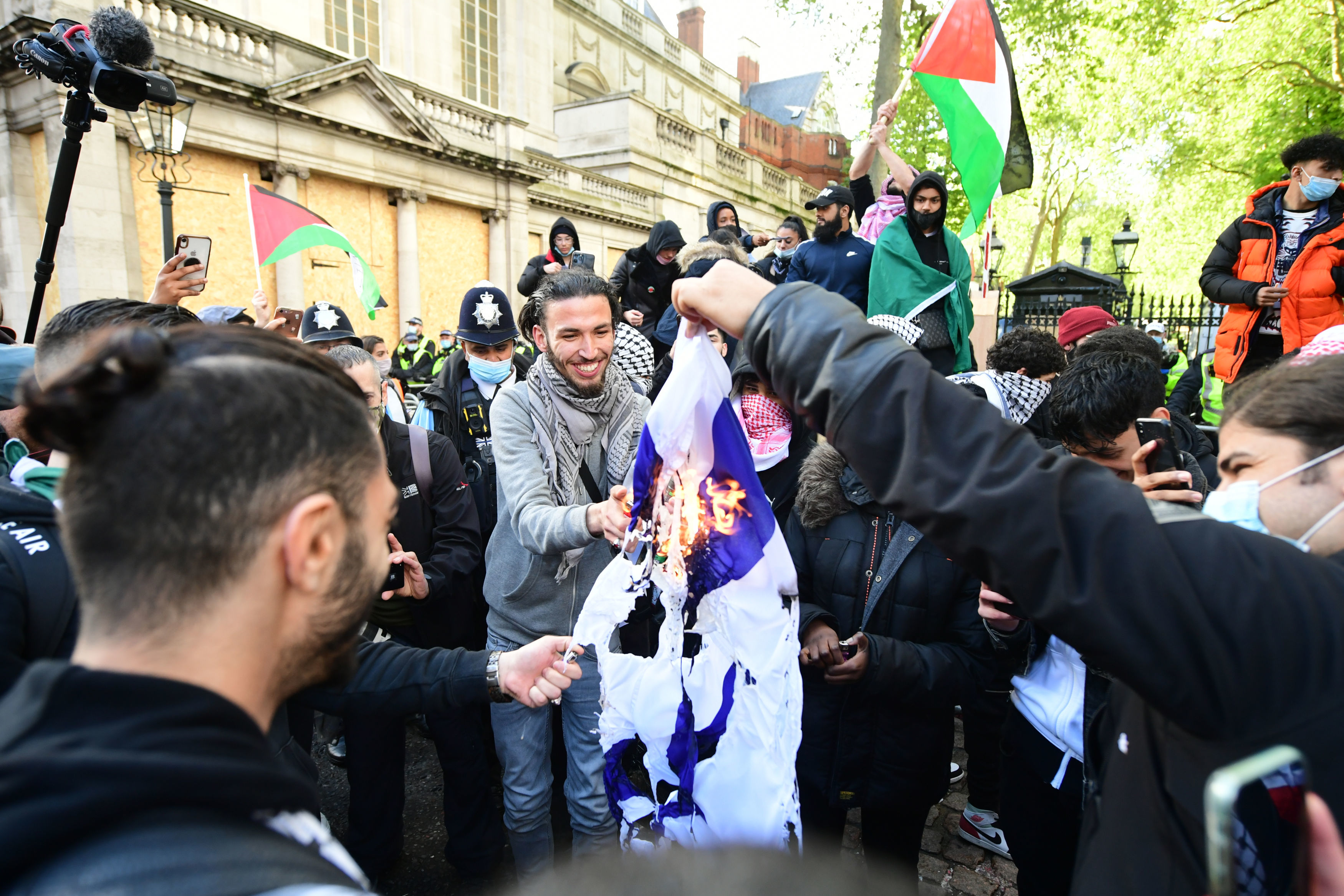 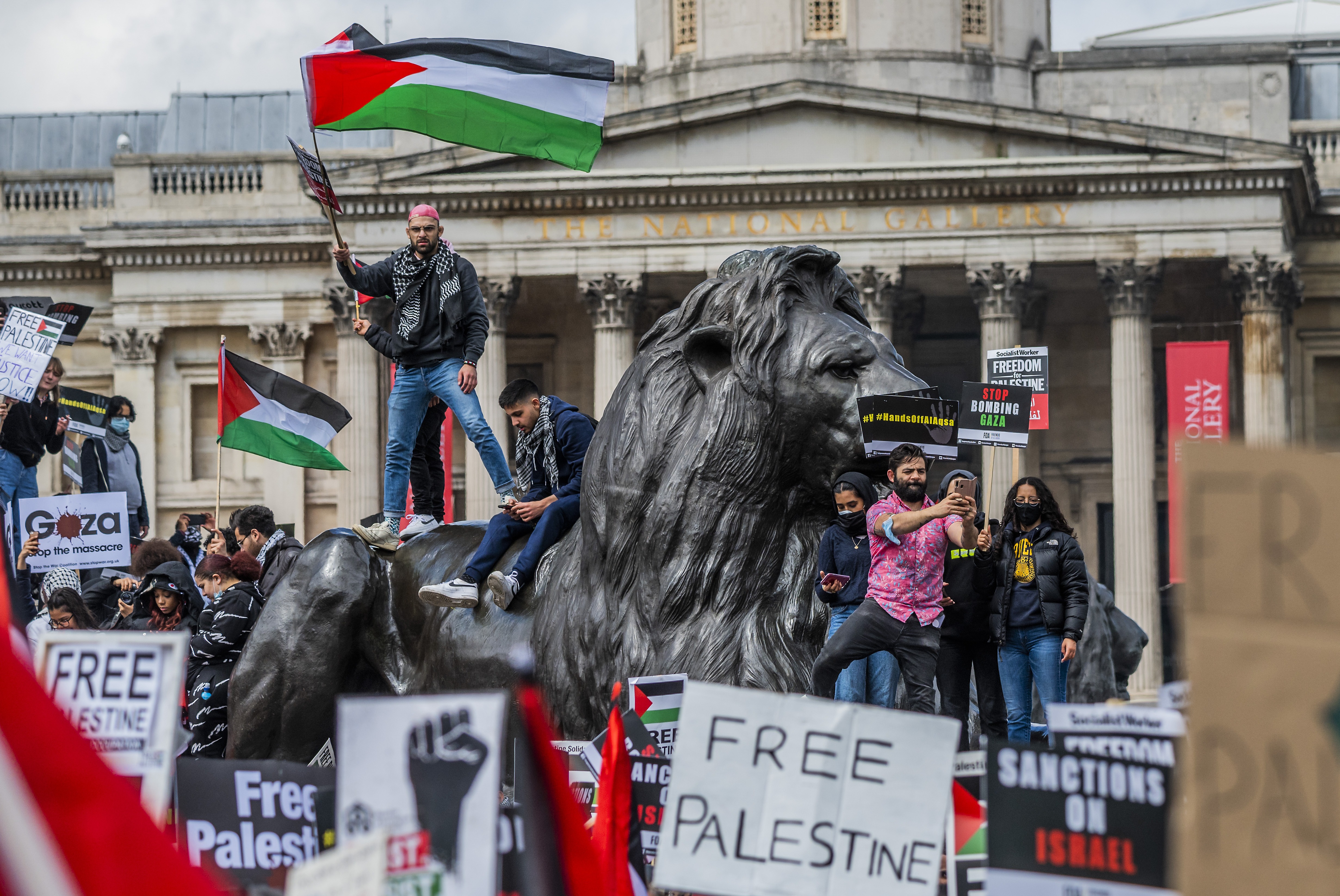 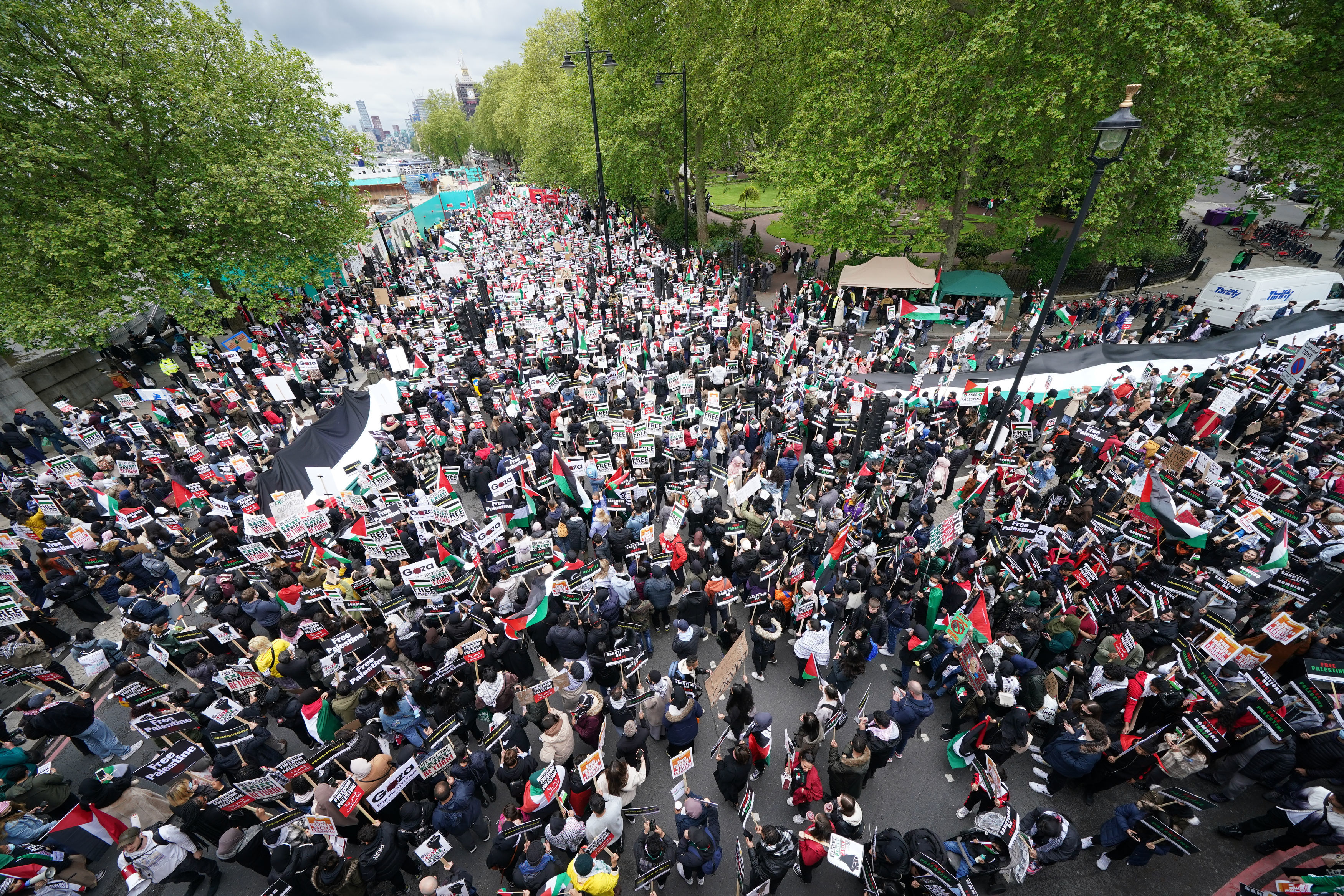 Protesters held banners, let off fireworks and chanted despite the heavy rain – with some heard yelling "Israel is a terrorist state".

A Palestinian flag was also placed at the top of a nearby crane – while an Israeli flag was seen being burnt outside the London embassy in Kensington.

Disturbances broke out later on as people started to disperse from the demo.

And cops tonight warned they would move on the groups after missiles were thrown at cops amid fears of more chaos.

The Met Police said in a Twitter statement: "Officers have made repeated efforts to engage with a group of protestors now on Hammersmith Road. The group is uncooperative, missiles have been thrown at police, damage has been caused and there is a risk of a further breach of the peace.

"We have considered the rights of the group to protest and also our duty to keep the wider community safe. Officers are now moving to contain the group and prevent any further progression through the area.

"Those who have not committed offences will be allowed to leave the containment in a controlled manner. They will be directed to disperse. Anyone failing to leave the area when instructed to do so could be arrested."

Organisers from the Palestine Solidarity Campaign estimated that over 180,000 people attended the rally.

Jeremy Corbyn was among the speakers at a protest attended by thousands in central London to demand "freedom" for Palestinians. 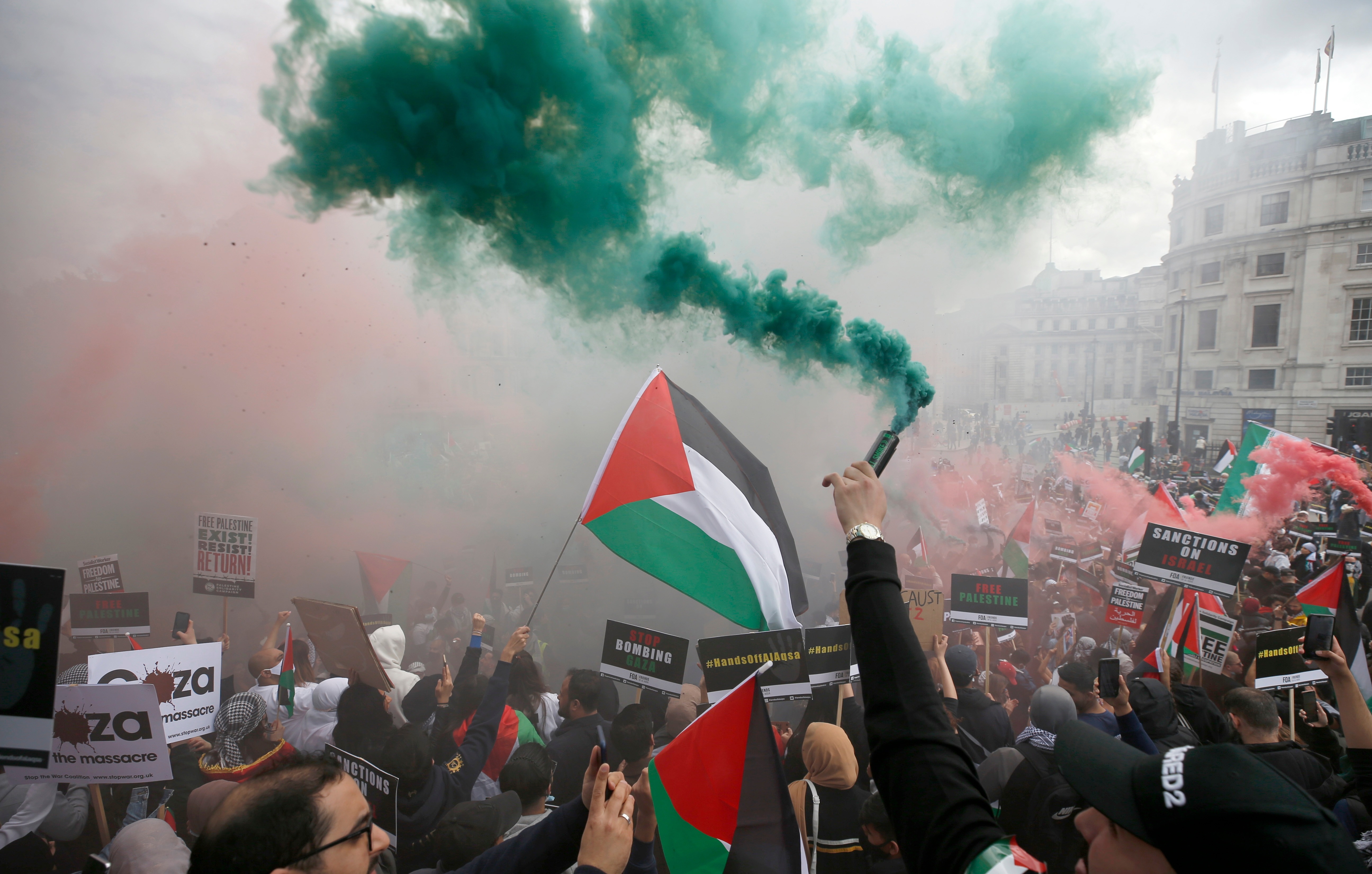 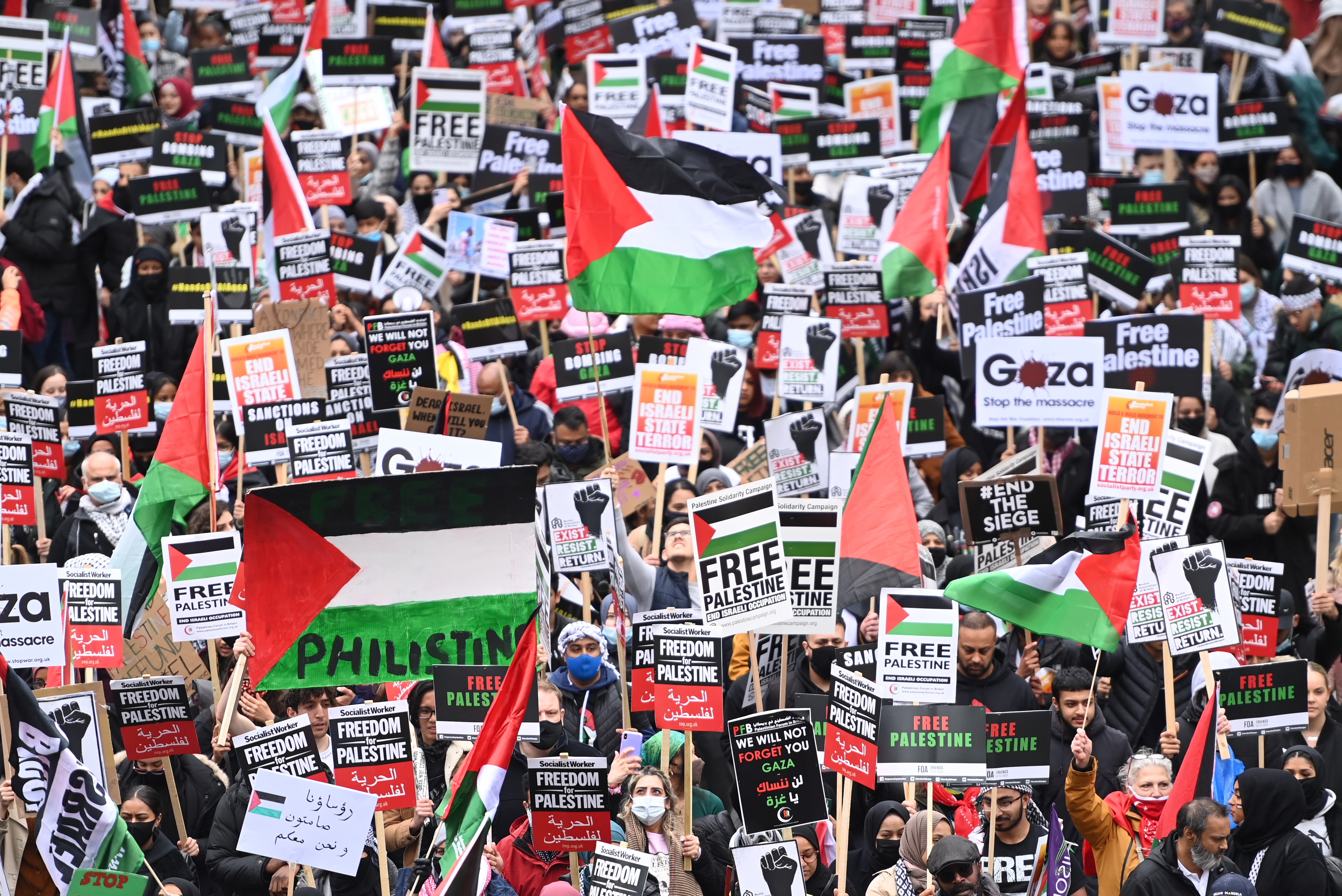 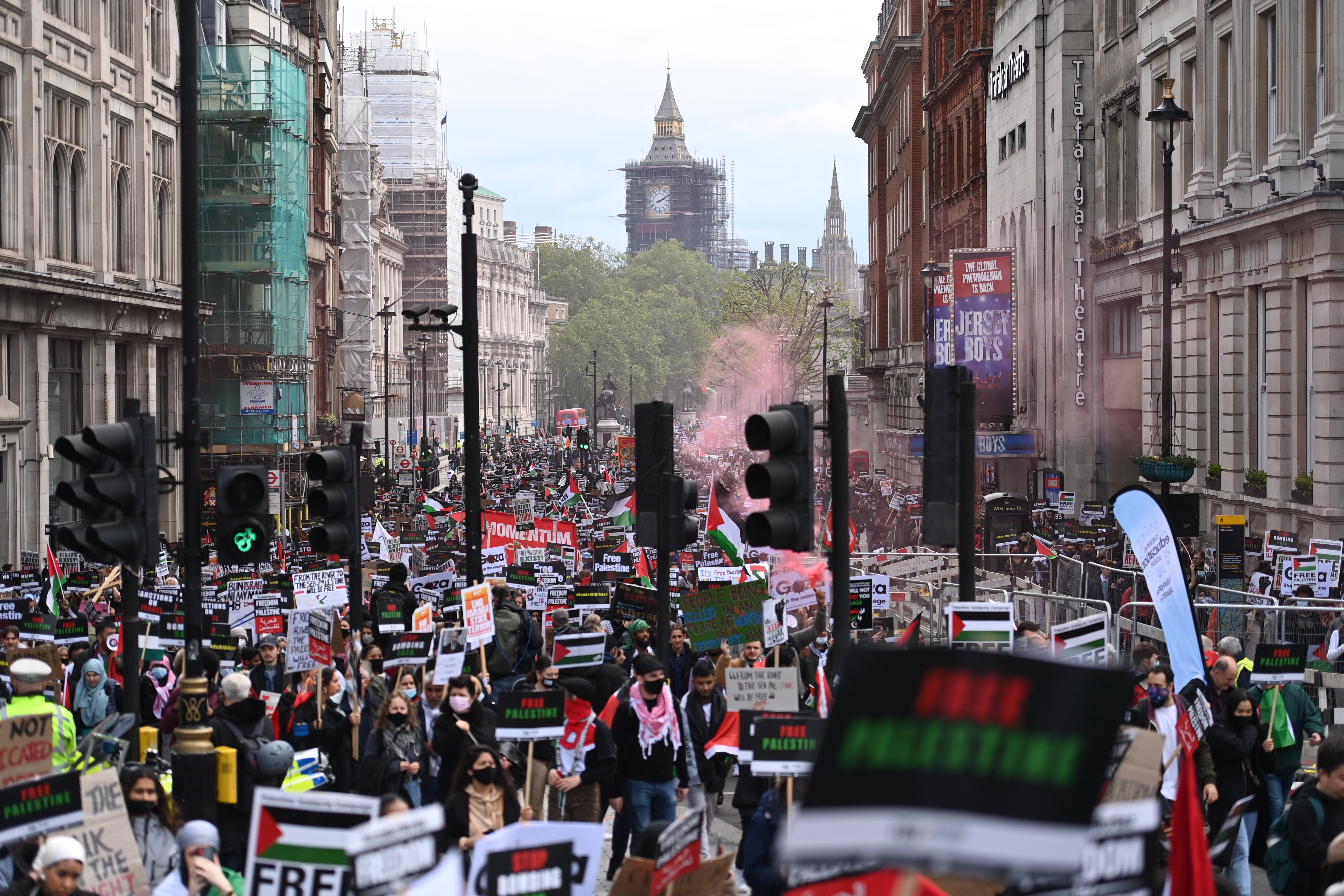 The former Labour leader said: "Children should not grow up having seen their home demolished by a bomb dropped from the safety of thousands of feet above.

"While the ceasefire is a step forward, unless the fundamental issues are addressed, we will be here again."

Mr Corbyn added: "We will be here as long as is it takes until the Palestinian people are free.

He was welcomed to the stage to large applause and chants of "Oh Jeremy Corbyn".

Former shadow chancellor John McDonnell, also at the demo, said: "Yes, a ceasefire has been negotiated and we welcome a ceasefire.

"But let's be clear, there will be no ceasefire in our campaign to boycott, disinvest and sanction the Israeli apartheid state.

"The message is clear, we will not cease our campaign in solidarity until there is justice.

"So let's make it clear, no justice, no peace."

It came after thousands marched through central London from Victoria Embankment on their way to Hyde Park.

They held banners and placards and chanted, blocking off road traffic as they walked.

Some could be seen wearing costumes, masks and face paint, while others were draped in the Palestinian flag.

Groups of police officers watched on, as people climbed bus stops and lampposts and wrote "Free Palestine" on walls.

Chants of "Israel is a terrorist state" and "we are all Palestinians" could be heard as they marched. 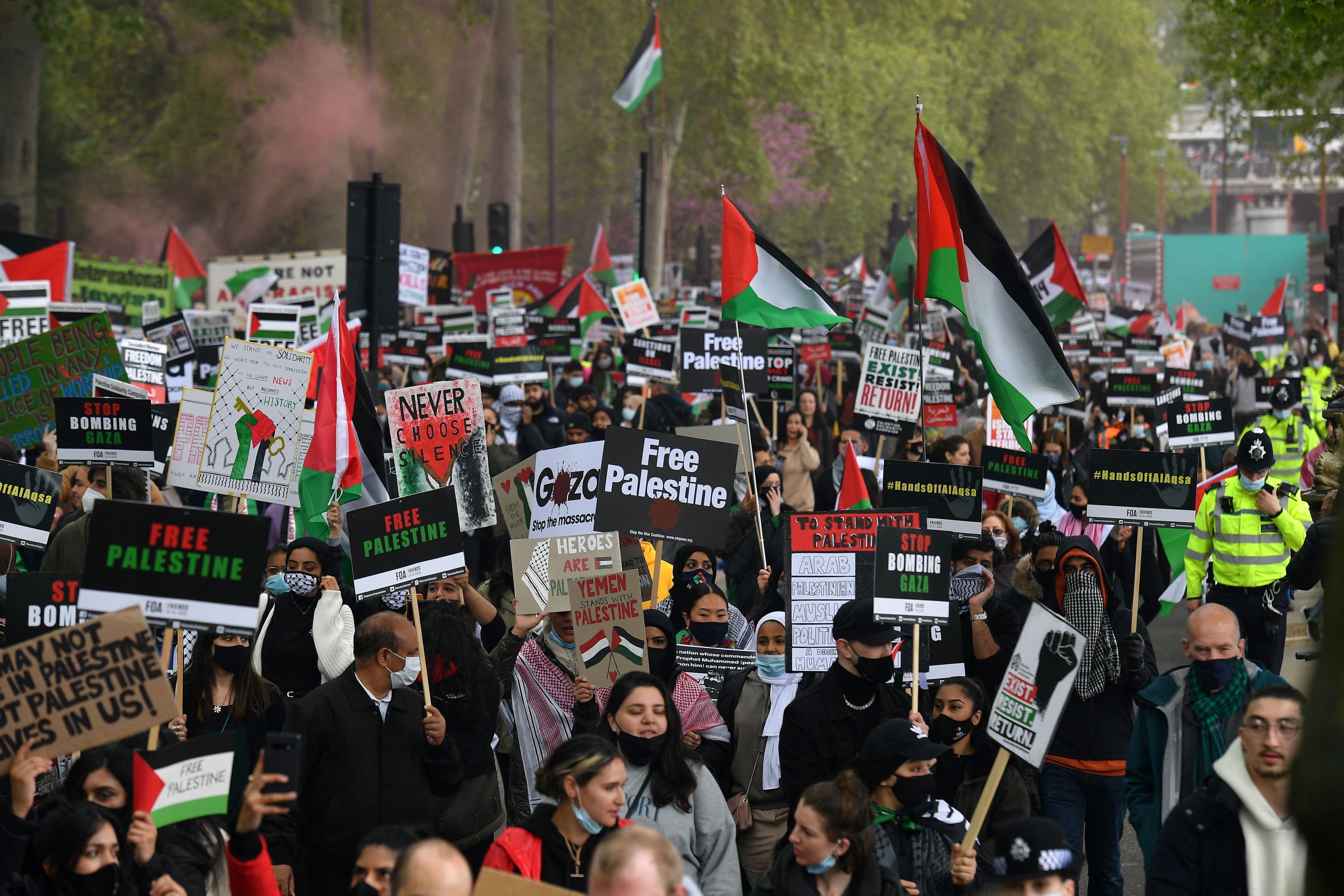 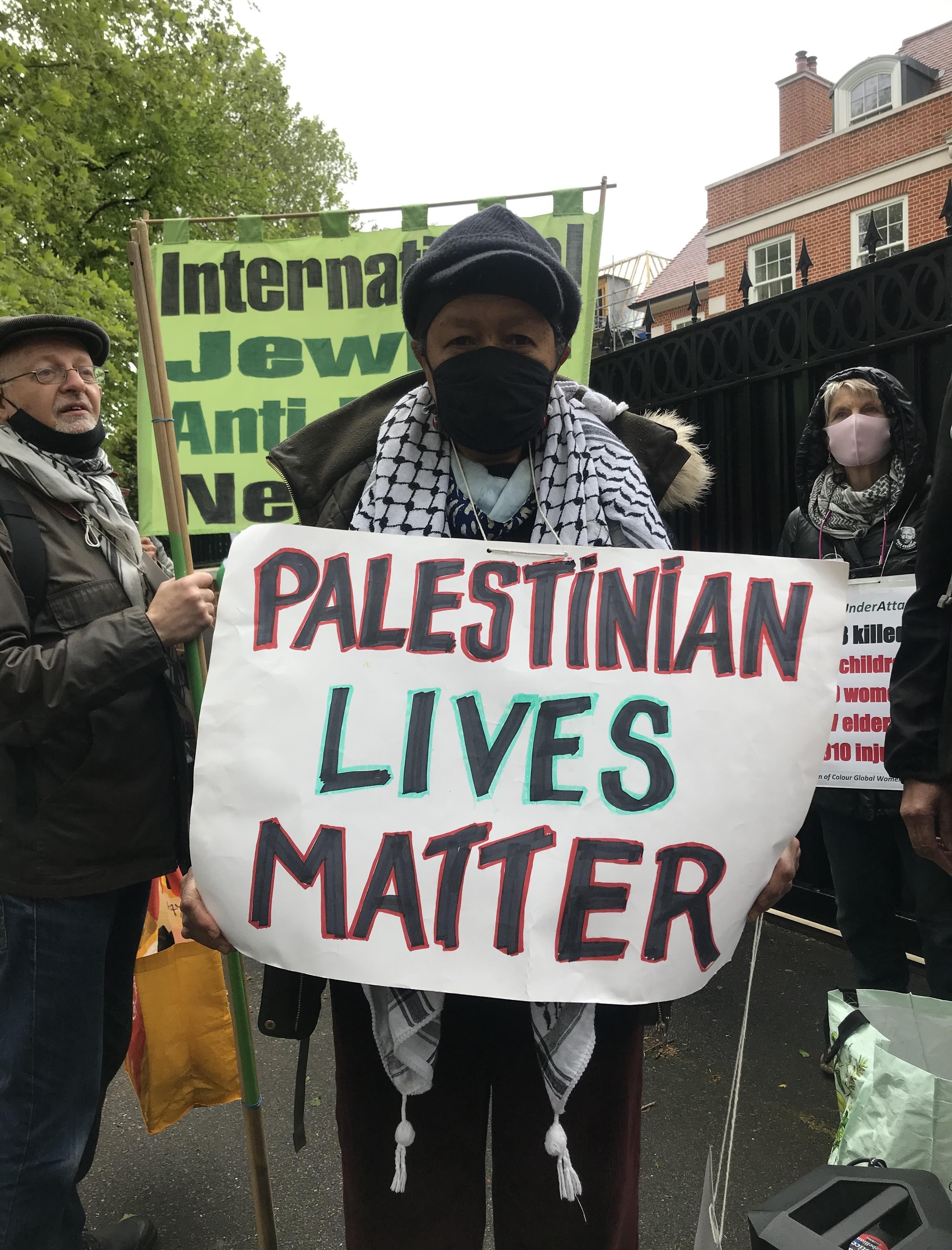 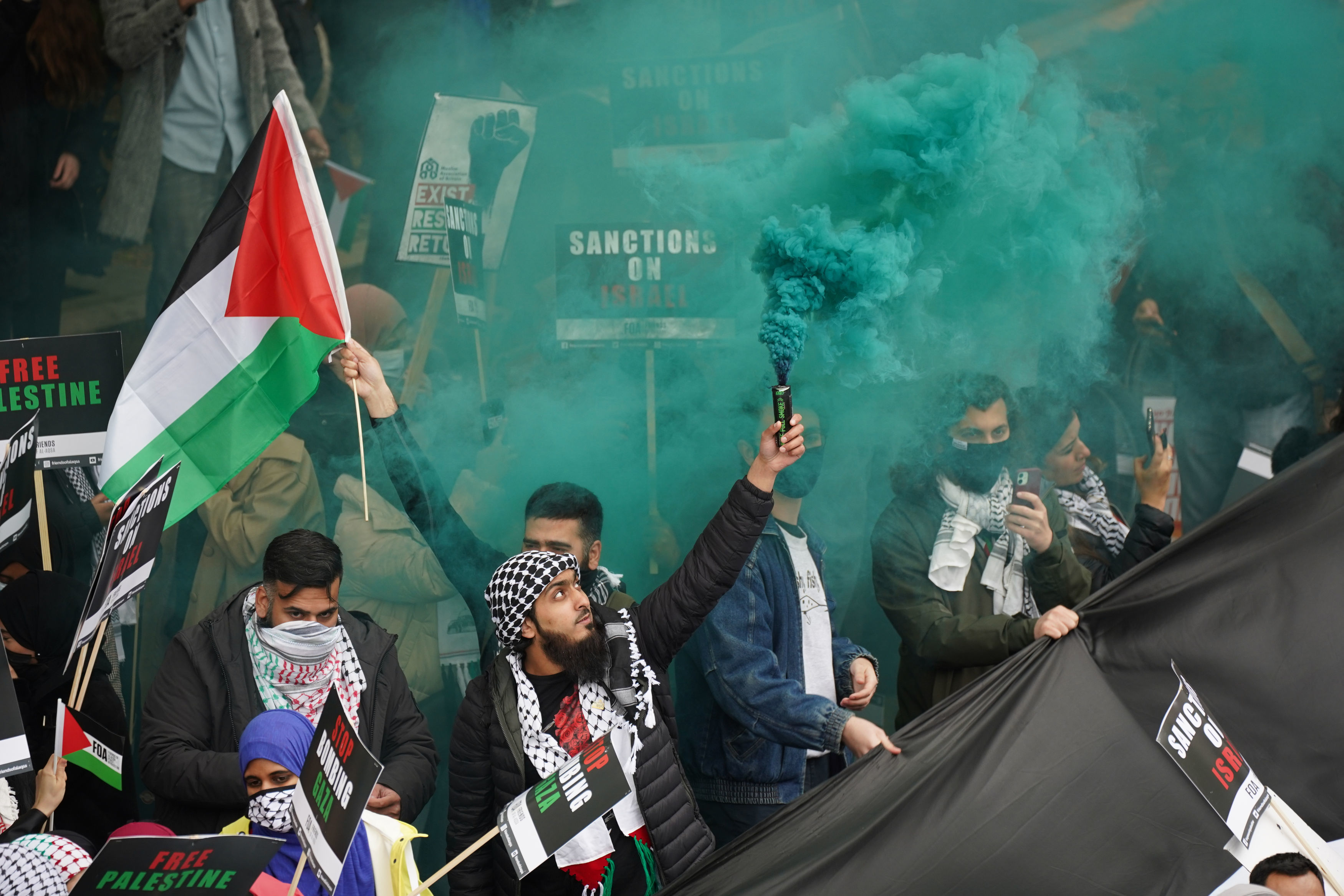 One protester, named Muktha Ali, 32, from Harrow, north-west London, told the PA news agency: "I'm here because this is now urgent, the Israeli occupation needs to end now, it's been long enough.

"Mothers, fathers, brothers, sisters and children have been bombed and murdered, Palestine has to be free."

Another, named Jake, said: "I stand in solidarity with Palestinians, and so should everyone, no matter your nationality.

"It's great to see so many people come out in their thousands to support the cause, we will win, our cause will be heard."

While largely peaceful, a few could be seen throwing objects at police officers who attempted to split up the march after they reached Hyde Park.

Among the groups in attendance were branches of the National Education Union and the Stop The War Coalition.

Saturday marked the first full day of a truce that ended the fourth Israel-Hamas war in just over a decade.

The protest came after a rookie cop faced the sack after she showed her support for Palestine at a previous demo.

Top brass are considering a gross misconduct charge against PC Nusheen Jan, 20, for shouting “Free, free Palestine” while on duty.

PC Jan, from an Iraqi background, spent three months training before starting six months ago with the Met’s Roads and Transport Policing Command.

Met boss Dame Cressida Dick is said to be “alarmed” at the display of support at the protest in central London last weekend. 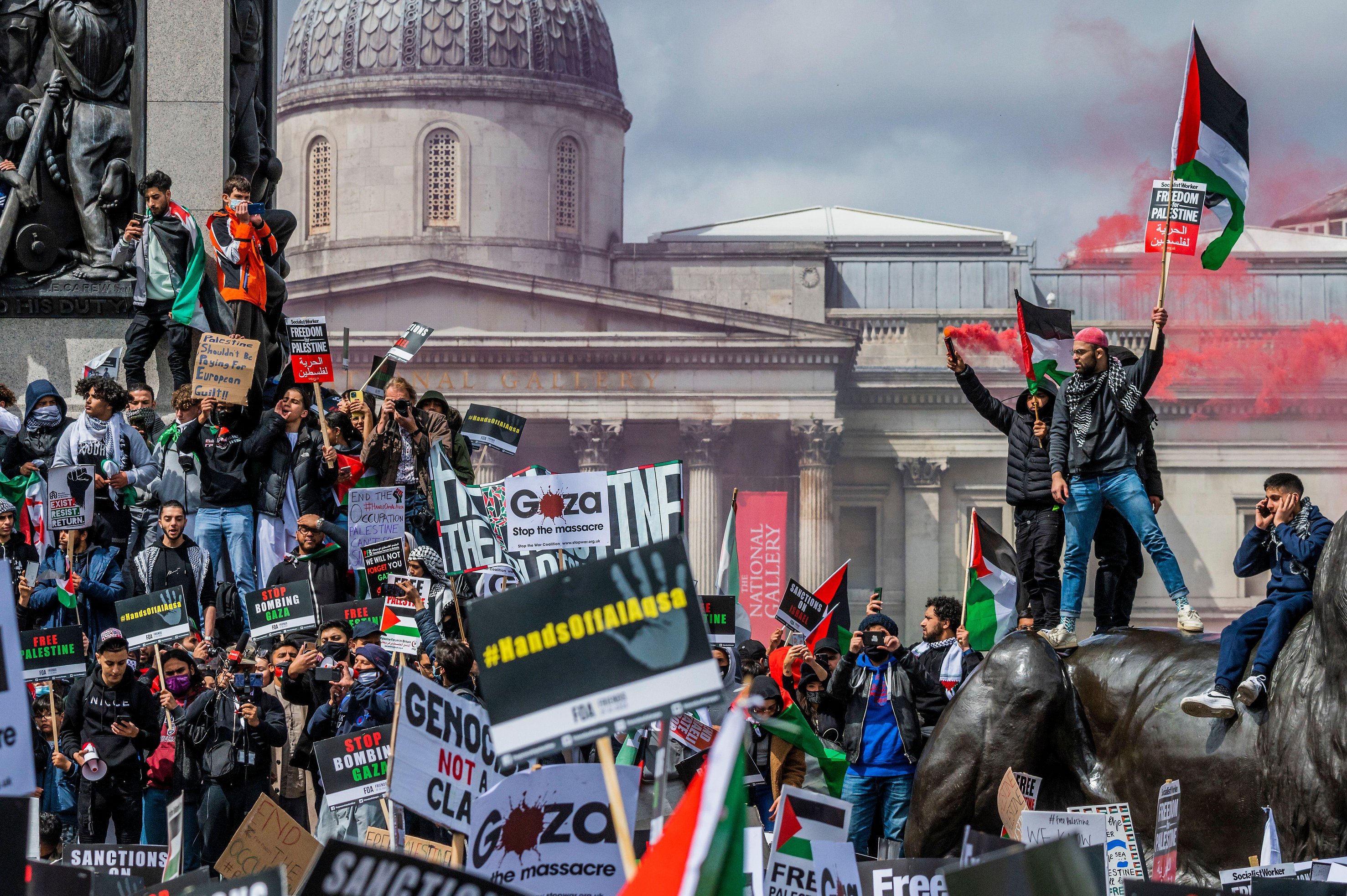 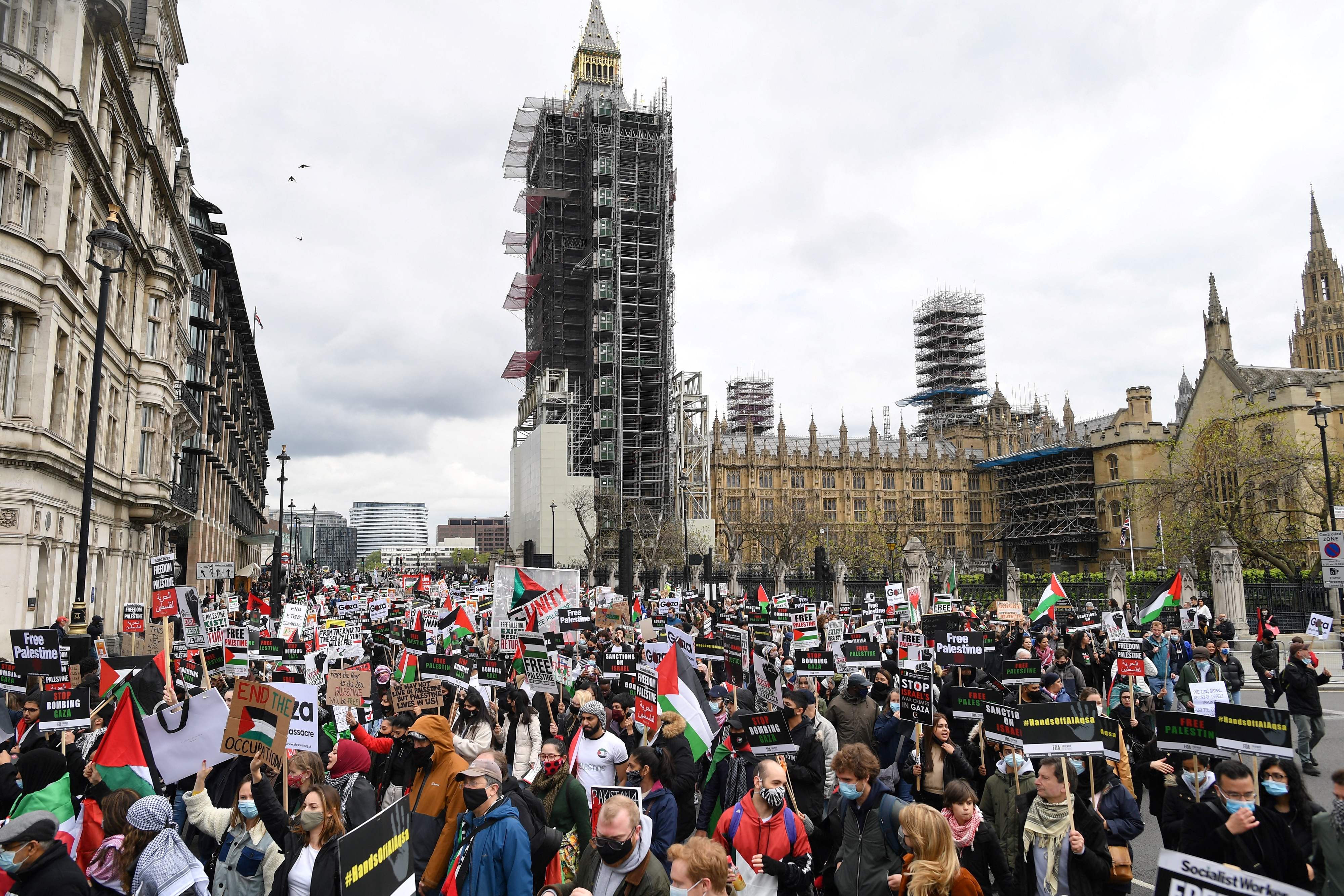