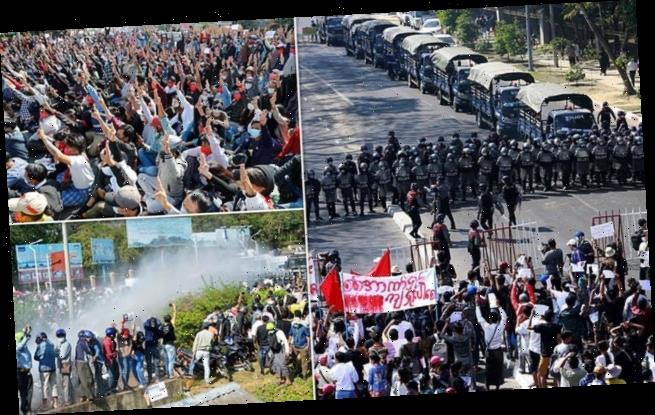 Police in Myanmar shot rubber bullets at protesters and fired gunshots into the air today as crowds defied a military ban on rallies and took to the streets to a fourth straight day to rage at last week’s coup d’etat.

Witnesses described police firing warning shots into the sky before aiming at protesters with rubber bullets, with some people injured in the melee in the capital Naypyitaw where police also fired a barrage of water cannon.

The military has banned gatherings of more than five people in the commercial capital Yangon and other protest hotspots, as well as imposing a night-time curfew, but fresh protests erupted in various places on Tuesday.

It came after junta chief General Min Aung Hlaing made a televised speech on Monday night to justify last week’s seizure of power – claiming that things would be ‘different’ from the army’s previous 49-year reign. 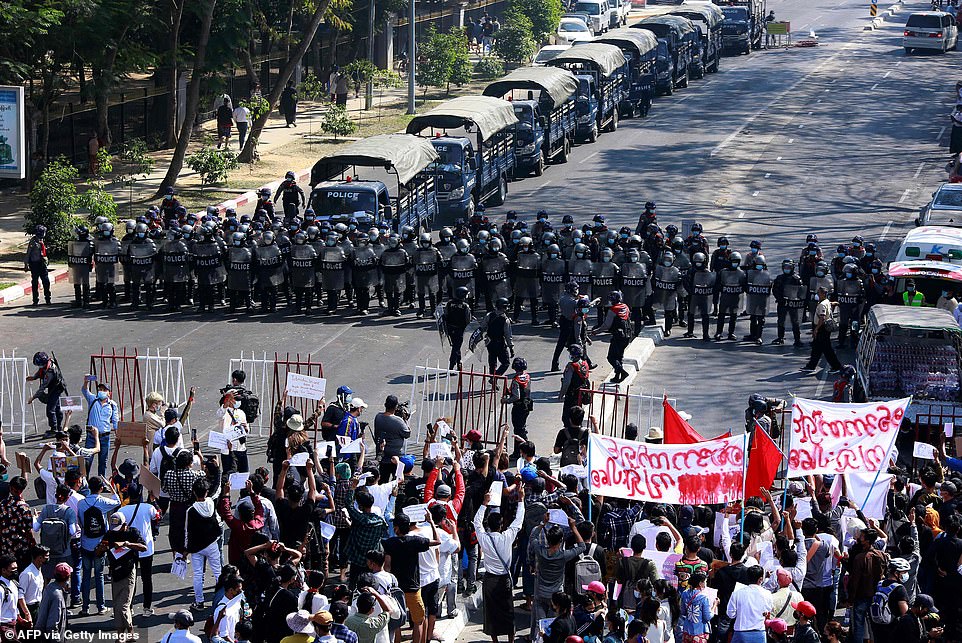 Stand-off: Protesters waving flags and holding placards are kept behind barriers as they face off against a line of uniformed riot police wearing helmets and carrying shields in Yangon today 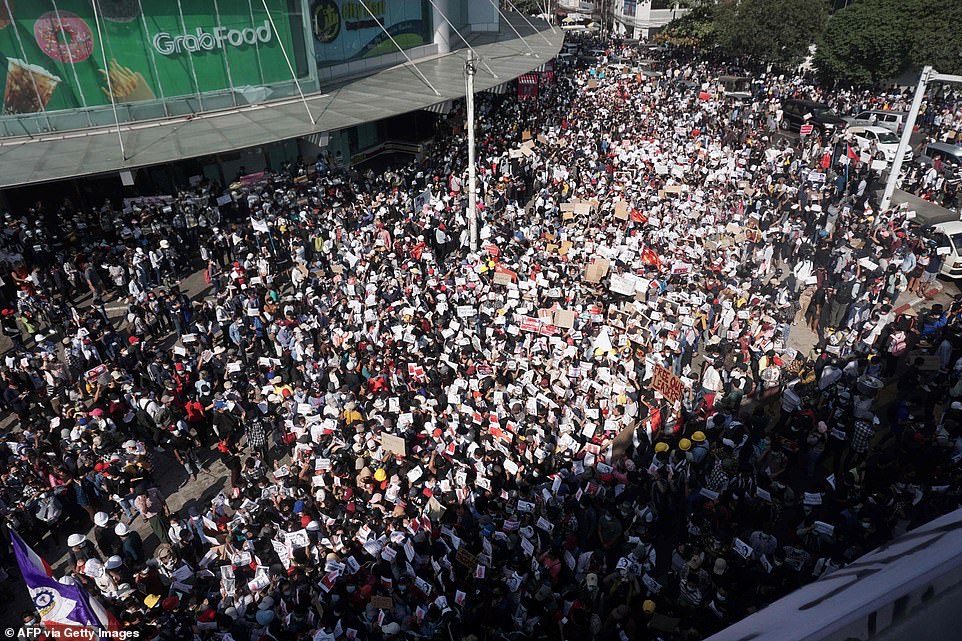 Huge crowds: Protesters took to the streets of Yangon for a fourth day today despite a military ban on gatherings of five people in more than parts of the city, as well as a curfew at protest hotspot sites 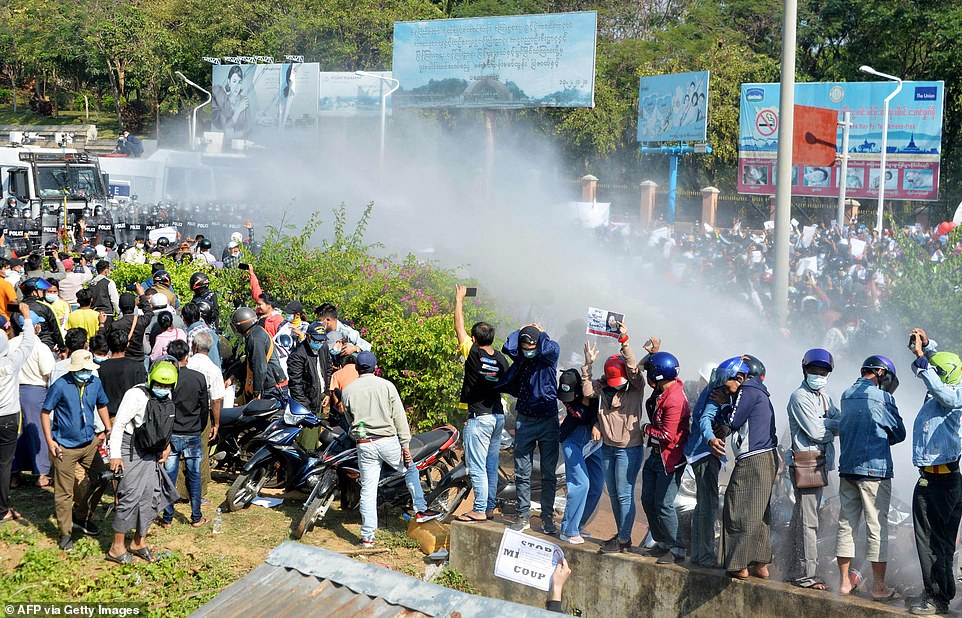 Water cannon: Myanmar police fire water at protesters from a truck (pictured far left) in the capital Naypyidaw as crowds continued to demonstrate against the February 1 military takeover

The general claimed that the seizure of power was justified because of ‘voter fraud’ at a November election in which Aung San Suu Kyi’s party, the National League for Democracy (NLD), had won in a landslide.

Shortly after last Monday’s coup, the military announced a one-year state of emergency and promised to then hold fresh elections.

‘After the tasks of the emergency period are completed, free and fair multi-party general elections will be held according to the constitution,’ the general claimed.

‘The winning party will be transferred state duty according to democratic standards.’

But the military also issued threats, releasing a statement on state TV warning that opposition to the junta was unlawful.

‘Action must be taken according to the law with effective steps against offences which disturb, prevent and destroy the state’s stability, public safety and the rule of law,’ said the statement read by an announcer on MRTV. 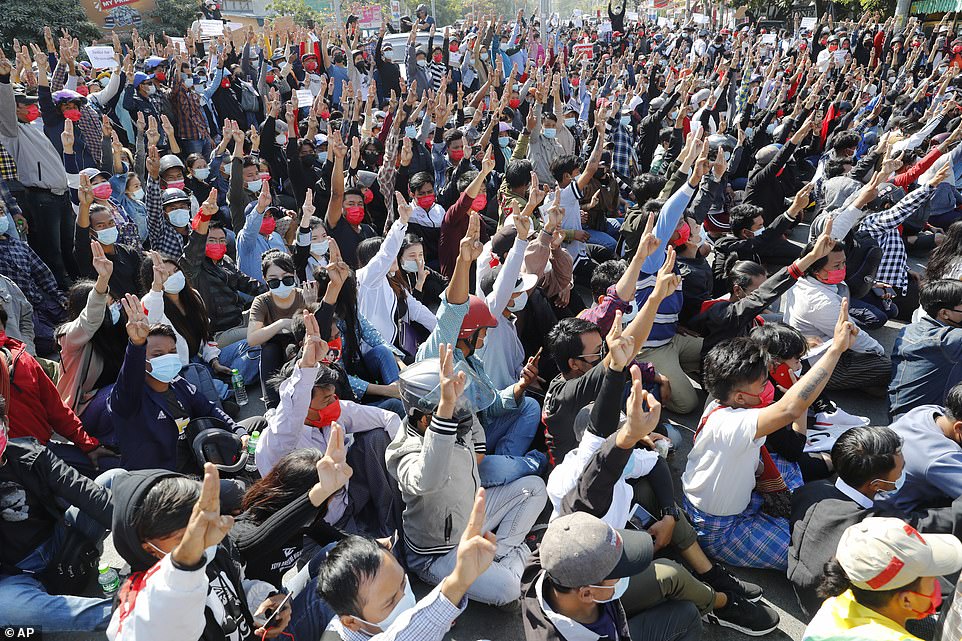 Symbol: Protesters in Mandalay, the country’s second-largest city, make the three-finger salute which has become a trademark of the pro-democracy movement 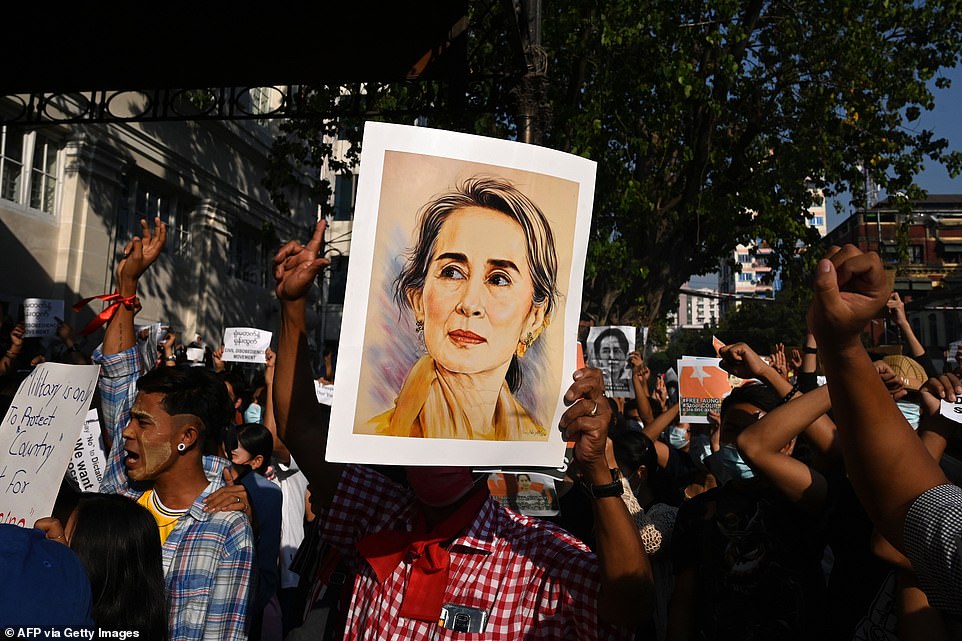 Icon: A protester holds up a portrait of Aung San Suu Kyi, the leader of the democracy movement who was deposed and arrested in last Monday’s military takeover – prompting international calls for her release 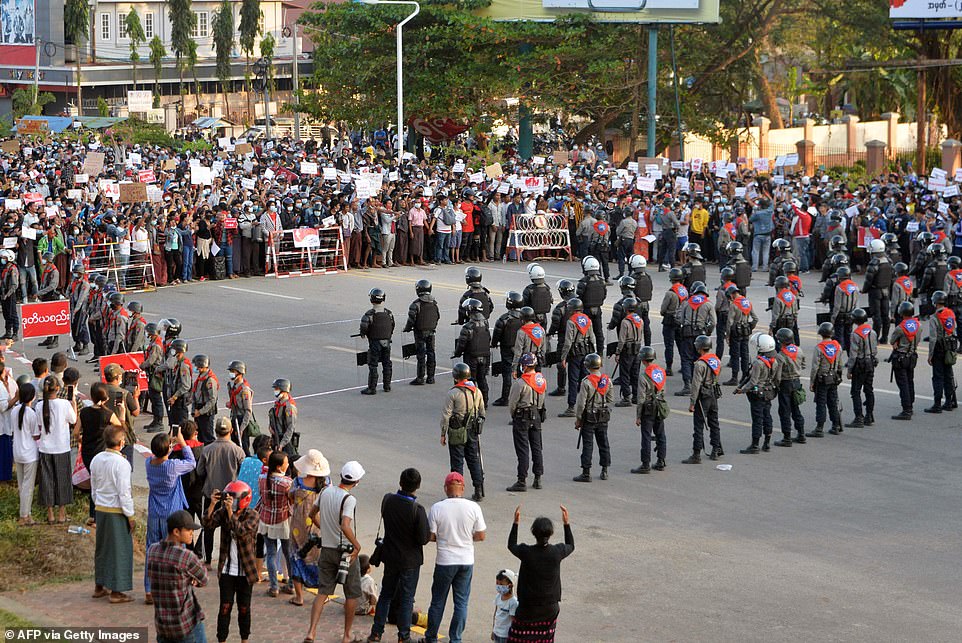 In formation: Lines of police stand guard in Naypyidaw today as watch a crowd of protesters wave placards behind a barrier

One of Tuesday’s protests took place near the headquarters of the NLD, whose deposed leader Suu Kyi was detained on the first day of the coup.

The protesters carried anti-coup placards including ‘We want our leader’, in reference to Suu Kyi, and ‘No dictatorship’.

In San Chaung township – where large gatherings were specifically banned – scores of teachers marched on the main road, waving a defiant three-finger salute that has become a trademark of the protesters.

‘We are not worried about their warning. That’s why we came out today. We cannot accept their excuse of vote fraud. We do not want any military dictatorship,’ teacher Thein Win Soe said.

Neighbouring Kamayut township – another area where gatherings are banned – had hundreds of protesters amass in defiance, singing songs and waving posters. 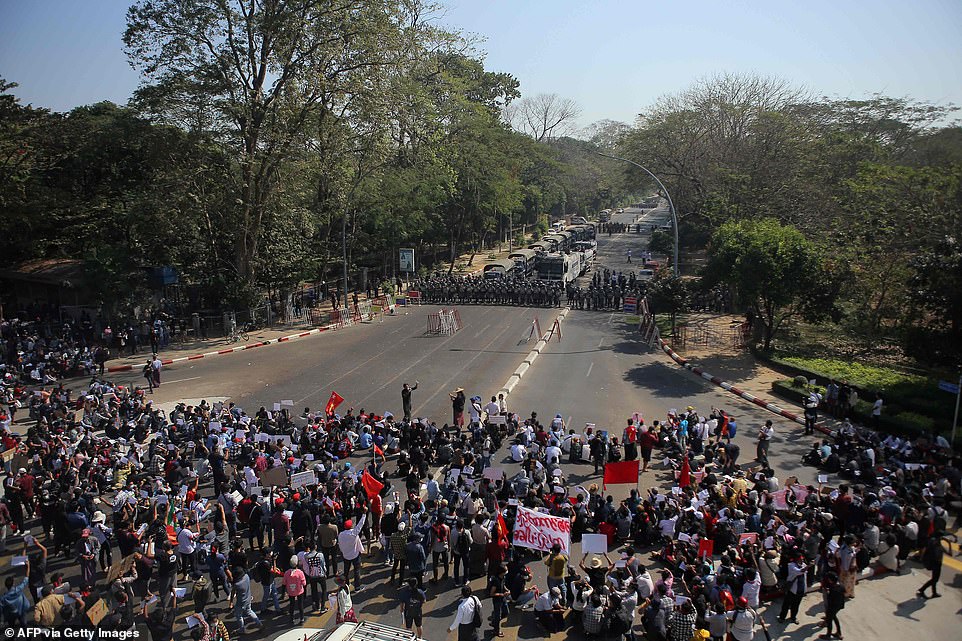 No-man’s land: Protesters hold up flags and placards across the road from a line of riot police and law enforcement vehicles 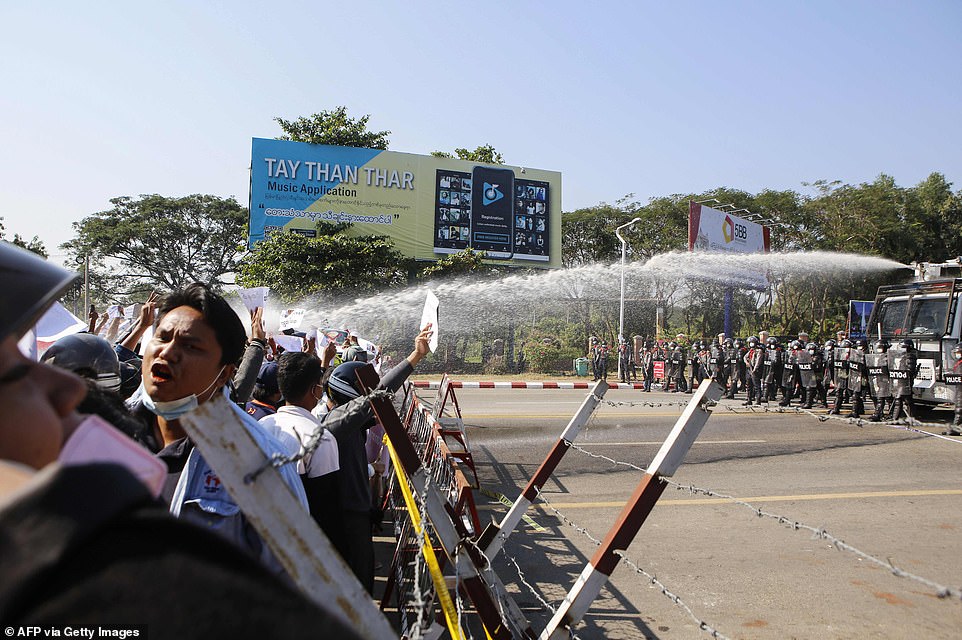 Battle: A police truck (right) fires water cannon at protesters who continued to rage at the military coup in Naypyidaw today

In Naypyidaw, police repeatedly fired water cannon against a small crowd of protesters, who withstood the barrage and refused to retreat.

‘End the military dictatorship,’ people in the crowd yelled as the water cannon was fired.

The United States has led global calls for the generals to relinquish power, and issued a fresh statement on Monday following the junta’s warnings against the protesters.

‘We stand with the people of Burma and support their right to assemble peacefully, including to protest peacefully in support of the democratically elected government,’ US State Department spokesman Ned Price said Monday.

Price also said US requests to speak to Suu Kyi were denied. 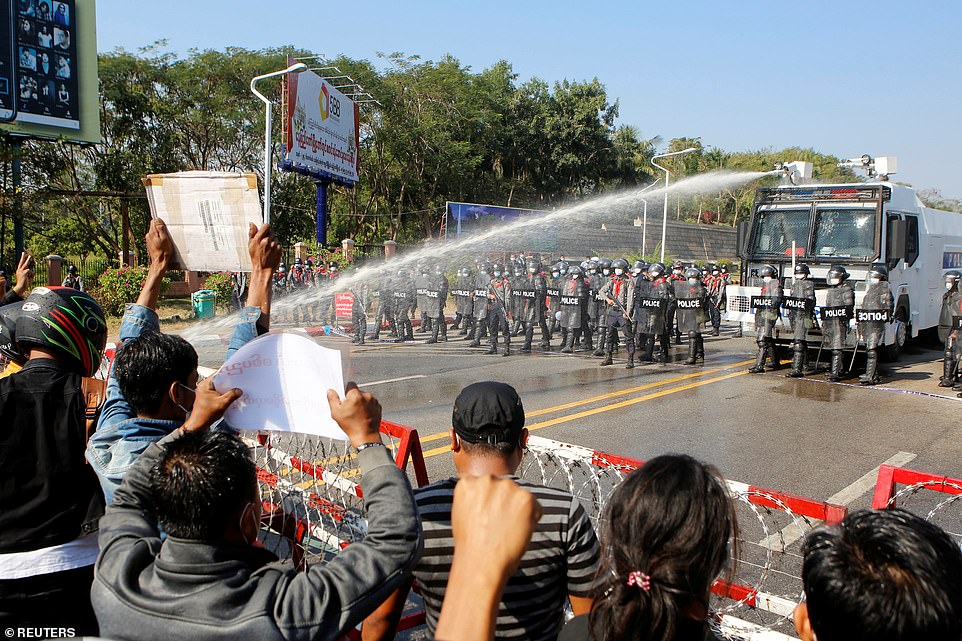 Defiance: Protesters hold up their placards even as their position is sprayed with water by a truck escorted by riot police 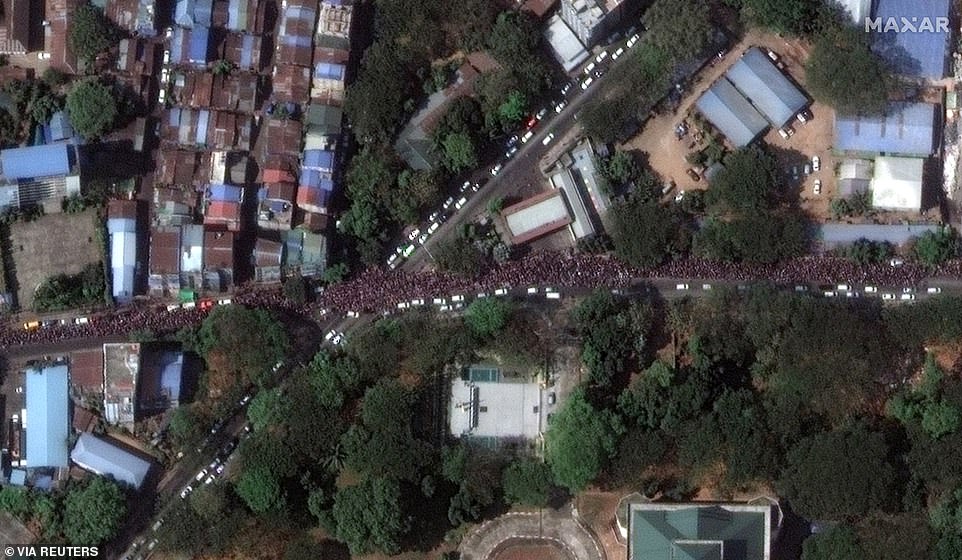 From above: A satellite image shows the crowds along Kyuri Taw Road near a Yangon TV and radio station on Monday

‘The path to democracy undertaken in recent years was brusquely interrupted by last week’s coup d’etat,’ he told a gathering of diplomats.

‘This has led to the imprisonment of different political leaders, who I hope will be promptly released as a sign of encouragement for a sincere dialogue.’

The UN Human Rights Council said it would hold a relatively rare special session on Friday to discuss the crisis.