Theresa May quit in tears today after a tumultuous 24 hours in which her ministers finally wielded the knife for her failure to deliver Brexit.

She delivered 1,000 words in a little under six-and-a-half minutes in the gently warming spring sunshine in Downing Street this morning to bring a close to her leadership after less than three years.

After being nicknamed the ‘Maybot’ over a perceived inability to show emotion she finally broke as she finished addressing the world at 10.10am, chocking over her words as she said she was leaving with ‘enduring gratitude to have had the opportunity to serve the country I love’.

And that was not the only emotional display she made after a gruelling few months at the top of Government.

Inside No 10 staff then gave her a standing ovation and an emotional Mrs May paid tribute to them and her husband Phillip exclaiming: ‘It’s been a journey’, before the the couple returned to their Berkshire home for the weekend.

Foreign Secretary Jeremy Hunt and Home Secretary Sajid Javid had started a chain-reaction after they both demanded private meetings yesterday and told her face-to-face they would be refusing to back her deal with the EU.

But both failed to tell her to resign or quit themselves as House of Commons Andrea Leadsom did hours earlier.

After a night at her Berkshire home with her husband Philip, the couple returned to No 10 together where she told staff she had decided to resign as Tory leader on June 7, after Donald Trump’s visit to Britain.

A meeting with Sir Graham Brady, chairman of the 1922 Committee, then sealed her fate after Tory backbenchers sent him in threatening to oust her if she failed to name her exit date.

It was shortly after this meeting that she emerged to announce her decision in front of a wall of waiting cameras.

This is how the last 24 hours unfolded for the PM: 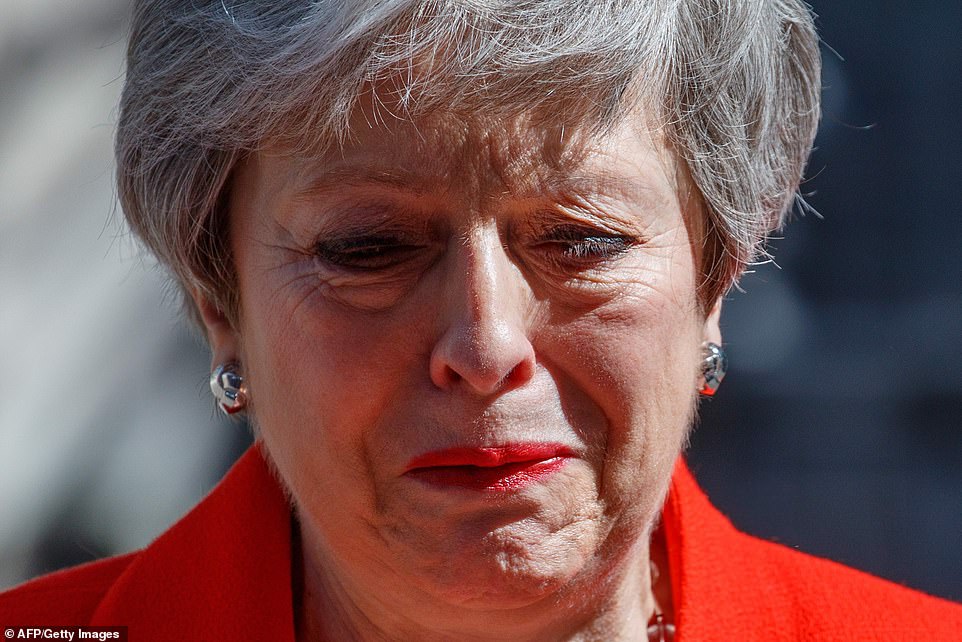 It was 10.10am this morning when Theresa May cried outside Downing Street, choking over her words as she said she was leaving with ‘enduring gratitude to have had the opportunity to serve the country I love’ 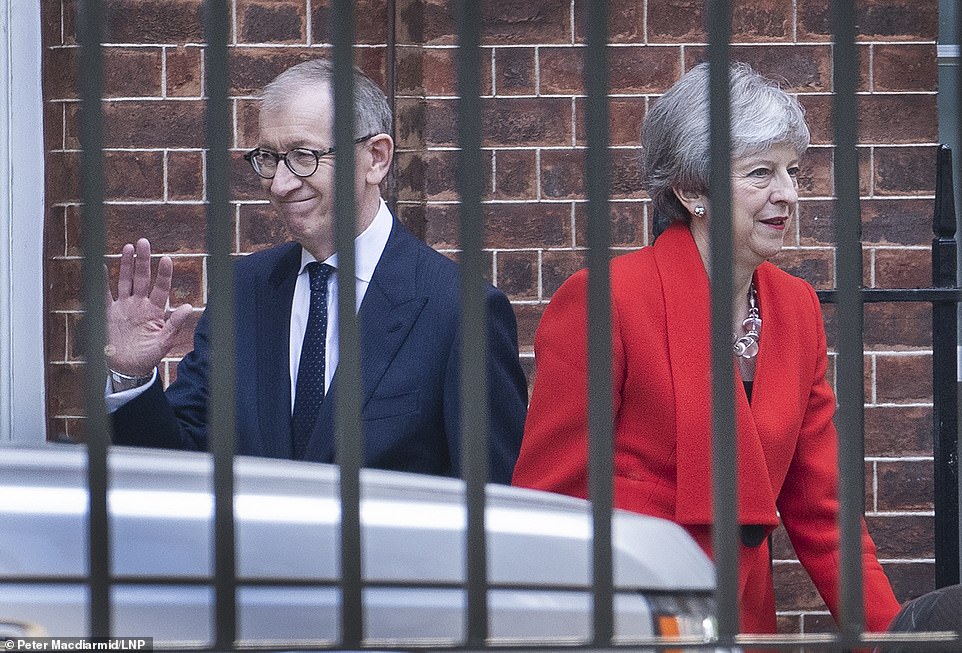 Minutes later she and husband Philip left Downing Street for the weekend as she faces the last fortnight in charge of the nation.

11am Thursday: Foreign Secretary Jeremy Hunt – who has since indicated he will run to replace Mrs May –  headed to No 10 where he told her to abandon plans to put her Withdrawal Agreement Bill to a vote by MPs next month.

Mr Hunt, one of more than a dozen Tory MPs hoping to succeed her, said it was not fair to ask loyal MPs to vote for a toxic compromise that had no chance of succeeding. But he did not tell her to quit – or threaten to resign himself.

His intervention came after a day of high drama in the Commons where Mrs May was seen leaving Parliament with tears in her eyes after she was battered during a debate on her Brexit bill.

To make matters worse Andrea Leadsom then called her to tell her she would resign. 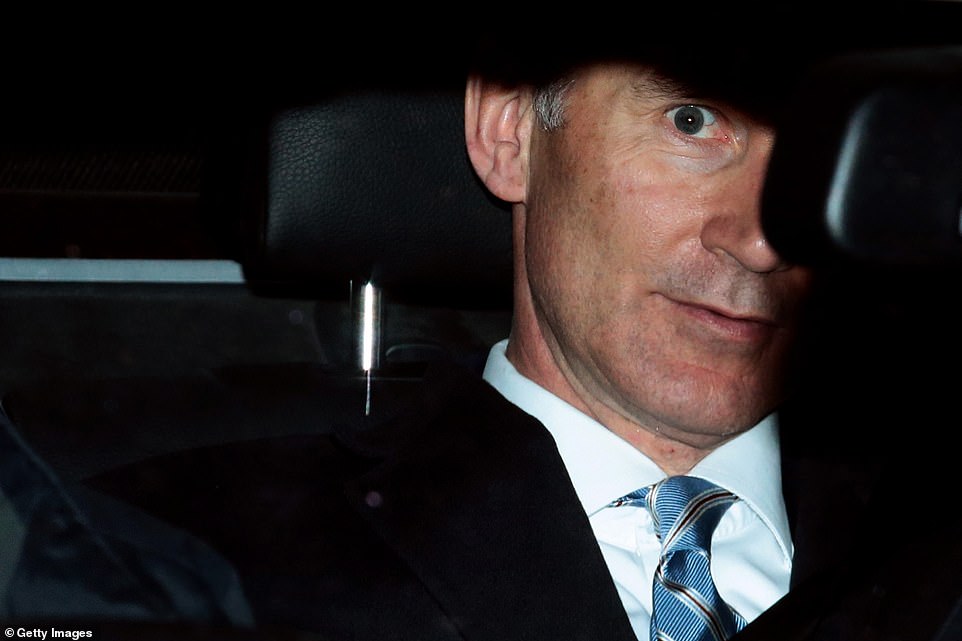 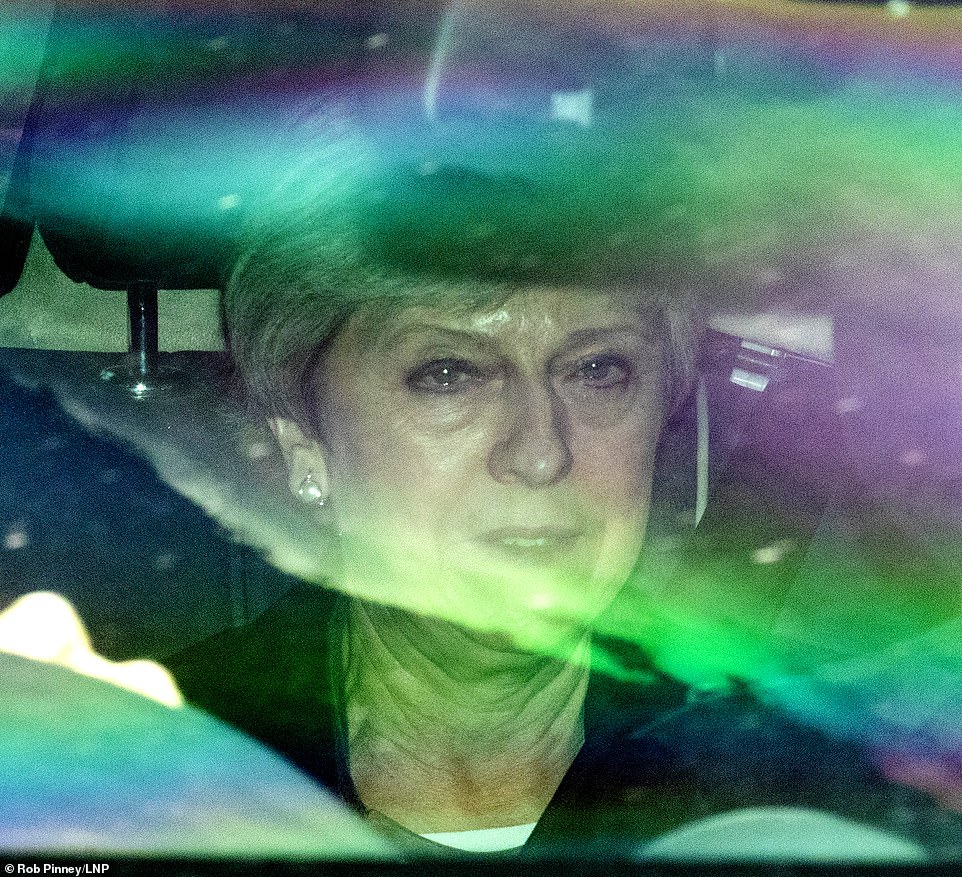 He warned her he could not back her Brexit legislation unless she dropped the option of a second referendum.

Scottish Secretary David Mundell wanted a meeting but it is not clear if this was blocked by the PM. 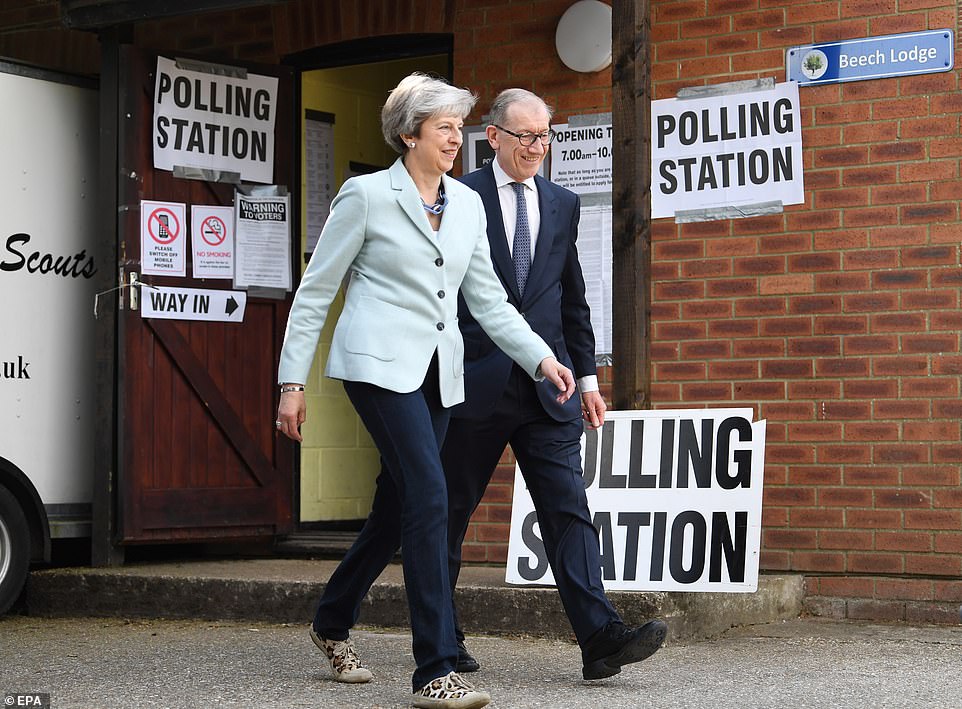 Prime Minster Theresa May and her husband Philip cast their vote at a polling station during the European elections in her Maidenhead constituency at around 4pm on Thursday. Less than 24 hours later she would have announced her resignation

4pm: The Prime Minister is driven to her Maidenhead constituency where she votes in the European elections. Mr and Mrs May smiled to photographers after voting Tory.

But the pre-election polls looked awful for the PM, with the Brexit Party more than 20 per cent ahead. The results will not be known until Sunday night, but leading MEP candidate Daniel Hannan predicted a Tory ‘wipe out’.

The gloomy European election predictions are likely to have influenced her decision to go.

Thursday night: Rather than head back to No 10, the Prime Minister chose to stay at her constituency home in Berkshire mulling her exit strategy with her husband Philip – who was yesterday urged by Brexiteers to tell his wife her time is up.

Former Tory leader Iain Duncan Smith said: ‘The person closest to her is clearly her husband, and I think somebody has to say look, nobody likes this… Politics is a nasty, sometimes brutal, ghastly business.

‘But the reality is that she has no confidence any longer, not just in her party but in the Cabinet as well. So the best thing for her and the best thing for everybody else is to break away and say it’s time to find a new leader.’

The PM will have discussed her future with her husband last night but she is thought to have made up her mind up to quit earlier this week after her deal fell flat on Wednesday and Commons leader Andrea Leadsom resigned that evening. 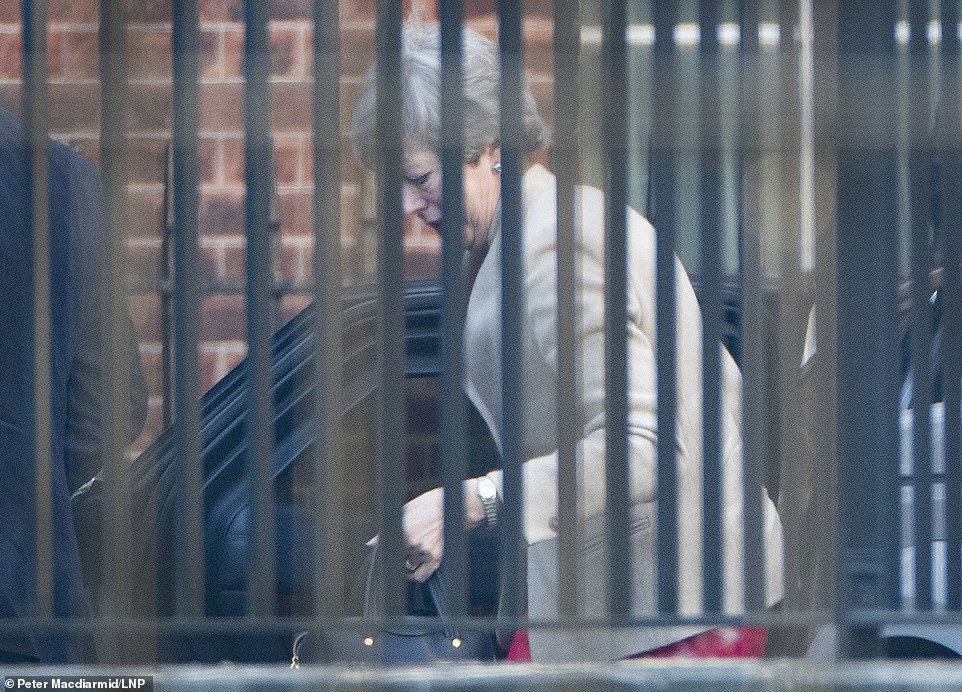 8am Friday: Mr and Mrs May are driven from their Sonning home to Downing Street where they are swept in via a rear entrance.

8.30am: She met her closest aides, including chief whip Julian Smith, chief of staff Gavin Barwell director of communications Robbie Gibb, and political secretary Stephen Parkison to reveal her decision.

They went through the text of her momentous statement – which was drafted by her young speechwriter Keelan Carr, who wrote the well-received address to Tory conference last year.

Aides said Mrs May showed few signs of nerves before stepping out to deliver the words. ‘She tends not to show nerves,’ one told MailOnline. ‘She has been doing this for a very long time, she is a pro.’

8.45am: Mrs May calls her allies in the cabinet, including long-serving minister James Brokenshire, to tell them she will be resigning shortly and thank them for their support. 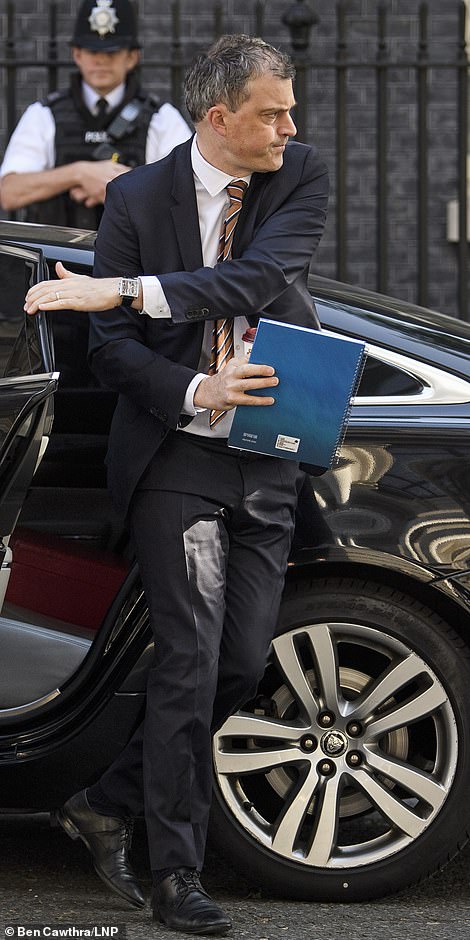 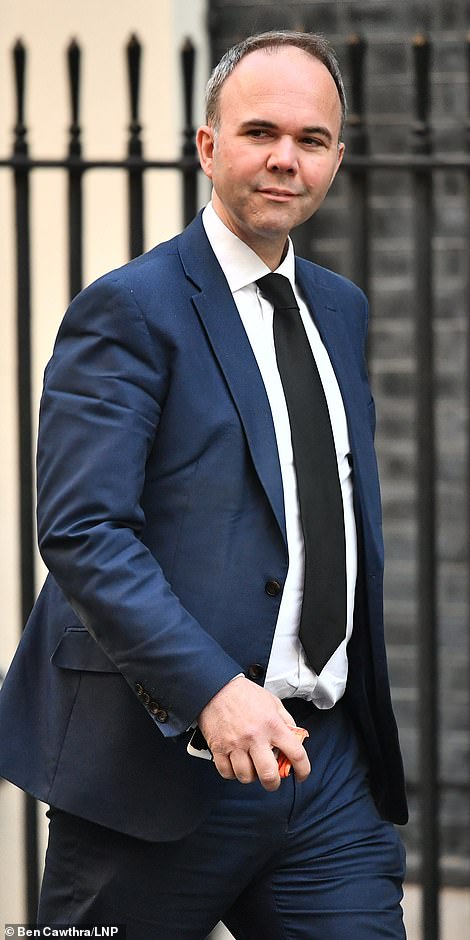 Government Chief Whip Julian Smith arrives shortly before 8.30am at No 10 Downing Street, where the PM later announced her resignation after just three years. He was followed in by May’s chief of staff Gavin Barwell 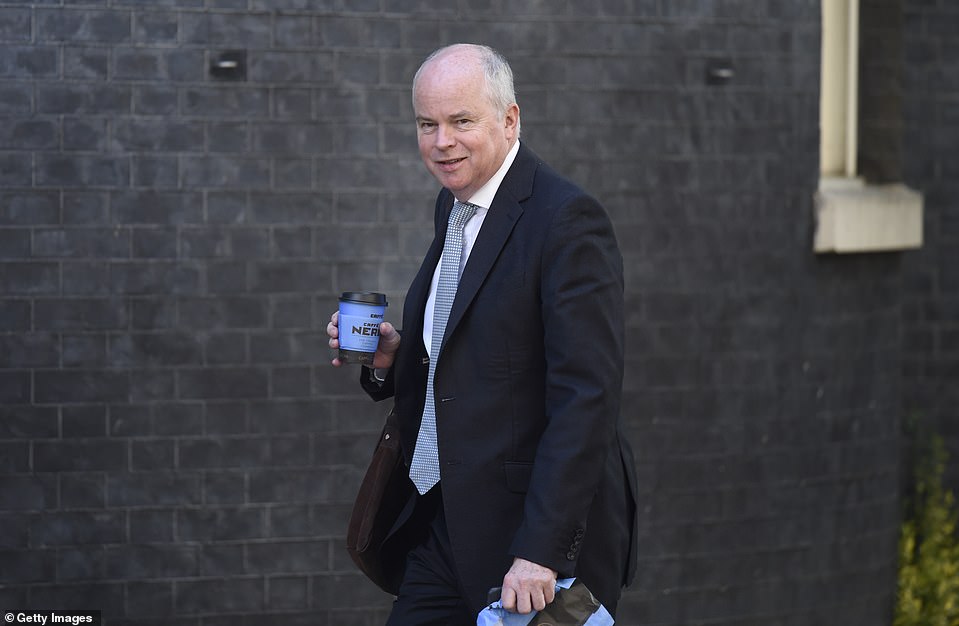 Mrs May’s director of communications, Robbie Gibb, managed a smile for waiting reporters as he arrived at No10 today

9am: Sir Graham Brady, chairman of the 1922 committee of Tory backbenchers, is smuggled into Downing Street where the PM tells him that she will resign as Tory leader on June 7.

If she had resisted the 1922 Committee’s executive had been expected to consider a rule change to force Mrs May out.

Sir Graham is said to have an envelope carrying a secret ballot on bringing a confidence vote forward, and would reveal the results if she failed to set a firm exit date on Friday. He later resigned as 1922 chief to launch his own leadership campaign.

10.04am: Theresa May exits No 10 and heads to the podium and delivers her resignation speech.

Watched by her husband Philip in Downing Street, Mrs May managed to keep her composure until the emotional moment she finished her 1,000-word speech, breaking down in tears.

The speech lasted for a little under six-and-a-half minutes.

The PM set out the things she had achieved in office but admitted she had to quit as Tory leader having failed to deliver her promise: delivering Brexit.

He voice cracked as she said: ‘I will shortly leave the job that it has been the honour of my life to hold – the second female Prime Minister but certainly not the last’.

And then she broke down saying: ‘I do so with no ill-will, but with enormous and enduring gratitude to have had the opportunity to serve the country I love’. 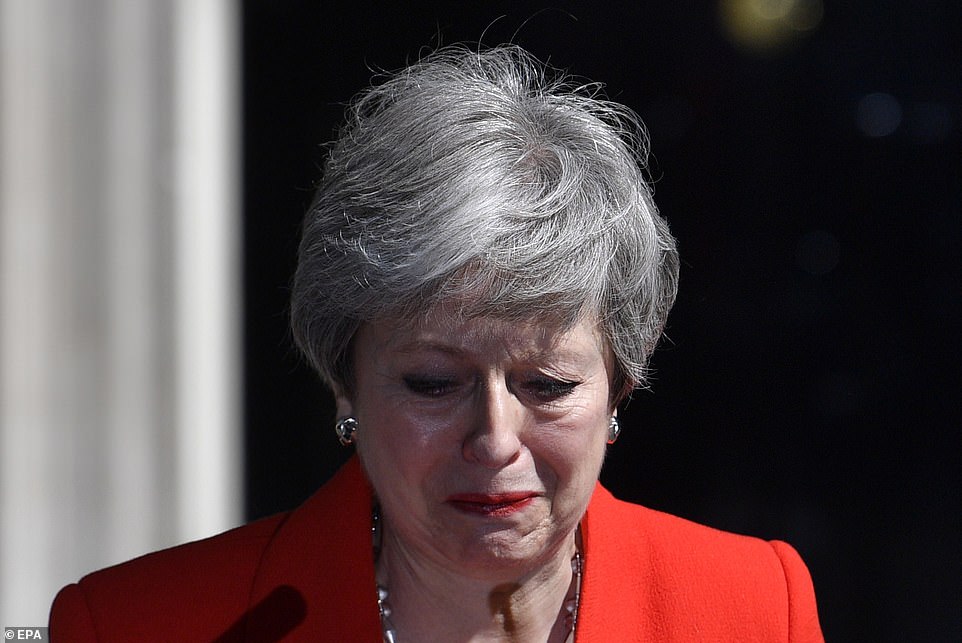 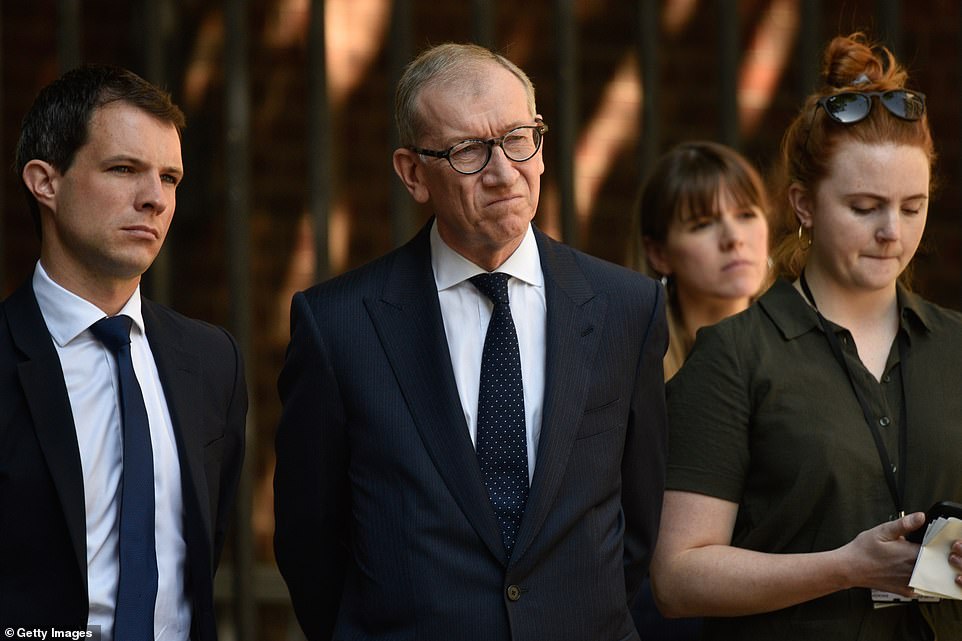 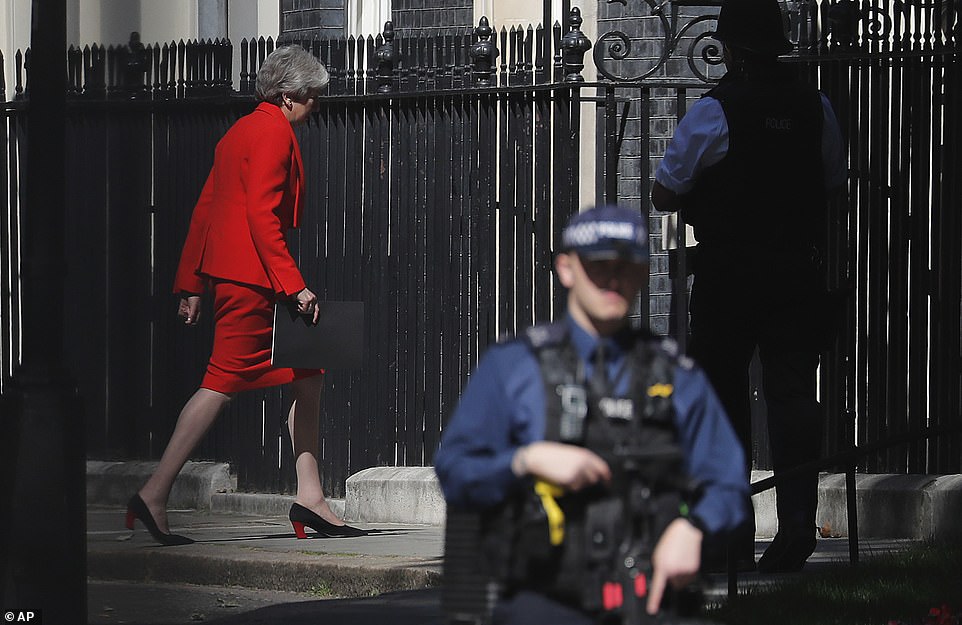 Despite the brutal assault on her position, there was an outpouring of sympathy today after she finally fell on her sword. As she re-entered No 10 at 10.10am staff clapped and cheered her

10.10am: Mrs May was clapped back into No10 by staff who had gathered in the entrance hall. She was heard expressing regret that she had been overcome by emotion. But one aide said the show of tears should be ‘one in the eye for the Maybot reputation’. ‘It has always been a nonsense,’ the source told MailOnline.

Mrs May then made a speech to a room of special advisers, thanking them for their hard work over the past few years. And she paid tribute in particular to her ‘rock’ Philip May.

An aide who was there said: ‘She held it together quite well but at the end when she was thanking Philip she was a bit tearful.’

Mrs May apparently welled up when she said of her time in office, ‘it’s been a journey’.

11am: 24 hours after Jeremy Hunt arrived for his meeting, Theresa May and her husband Philip raised a smile and leave Downing Street and head back to her constituency, where she said she would stay on as an MP. 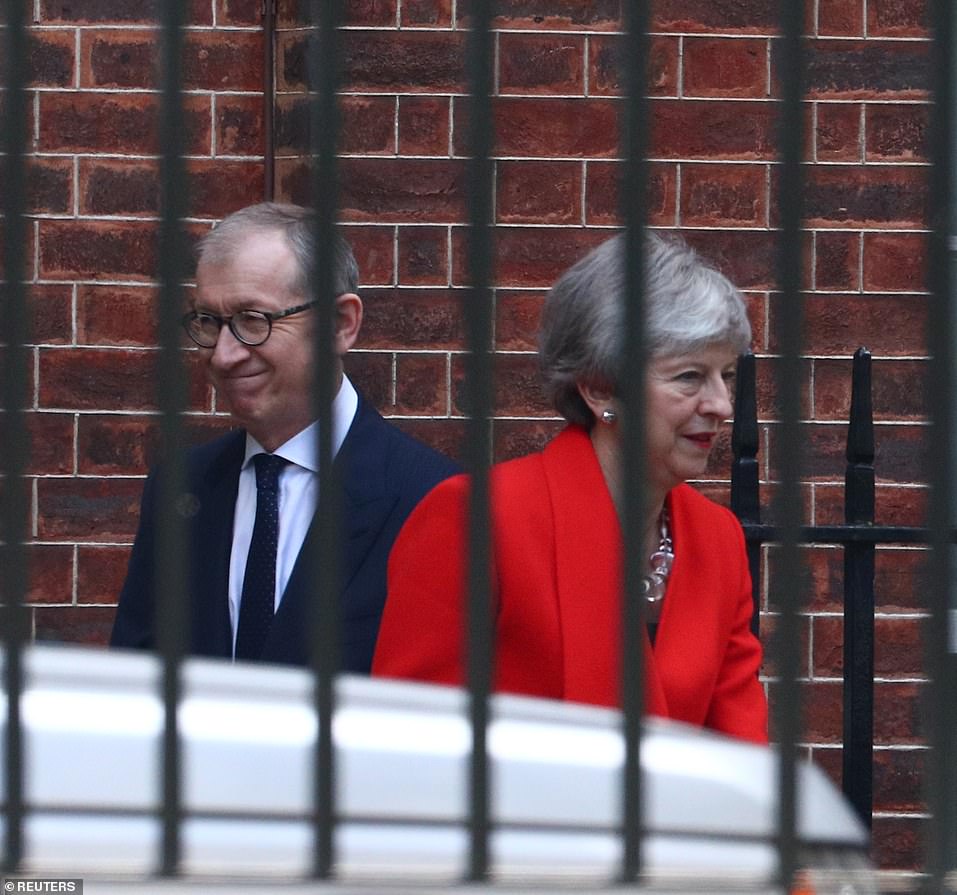