Al-Hawl camp, Syria: Australia Street is a few tents for the former families of Islamic State perched on a dusty hillock at the far outer edge of al-Hawl refugee camp.

There are no signs or indications for how to get there, and as we drive around the camp searching, children throw stones at the car and shout: "What are you doing here?"

When we eventually find it, a group of skinny, scared women from Sydney and Melbourne usher us into a tent with their children. Their first question is whether we brought them Vegemite. We did not. 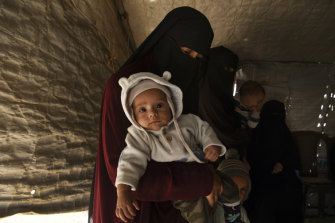 Kirsty Rosse-Emile, 25, holds her two-month-old son Yahya, the youngest Australian detained in the al-Hawl camp in the Kurdish-controlled region of Syria.Credit:Kate Geraghty

"It's good to hear an Australian voice," they say nonetheless.

But they are frightened. If al-Hawl camp was bad before, Syria's descent into yet another war – this time between Kurdish militias and Turkey – has made it significantly worse. The number of guards has halved to 300 trying to keep 70,000 people in. The rest have gone to help the Kurdish war effort in Syria's north-east.

Those guards remaining are too wary of a hard core of IS women to venture into the foreign section of the camp. In their absence people-smugglers are breaking people out and spiriting them away, and the camp's coordinator says the feared Hisba – self-appointed religious police still enforcing IS doctrine – are armed and becoming stronger and more aggressive by the day. 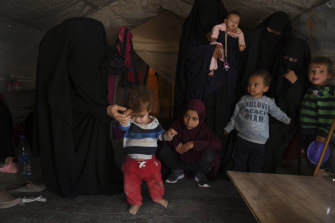 Australian women and children gather in a tent in the al-Hawl camp where they watch Omeid, who suffers with spinal deformities and malnutrition, attempt to walk.Credit:Kate Geraghty

Speaking on radio station 3AW on Tuesday, Australia's Home Affairs Minister Peter Dutton reiterated his reluctance to assist the women and children spoken to by The Age and The Sydney Morning Herald.

They posed a terror risk, he argued, and suggested DNA testing would be required to verify their Australian citizenship claims. Even then it would be very difficult to see how they and their children could be repatriated, he said.

"It is an incredibly dangerous situation and the government has been very clear that we aren't going to put defence personnel or DFAT personnel or home affairs personnel in harm's way to provide support to these people," Mr Dutton said. 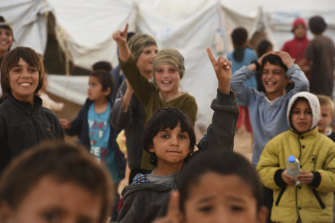 Children at the al-Hawl camp raise their index fingers to the sky in a sign for monotheism adopted by Islamic State followers.Credit:Kate Geraghty

Food is getting scarce.

"They're starting to tell us at the shops, 'Stock up on water, stock up on flour, you don't want to get hungry'. And just hearing that, can you imagine, it's really scary," Ahmed says.

These women want to go home. They want to build enough sympathy that the Australian government must act against its will and its perceived political interests. Home Affairs Minister Peter Dutton has said some of these women are dangerous and still hold radical beliefs. Australian lives should not be risked to extract them, he says.

Public opinion is on his side. A recent Essential Media poll found only 39 per cent of people wanted the women and children returned to Australia, while 47 per cent were opposed. Among Coalition voters, the "No" vote was almost 60 per cent. 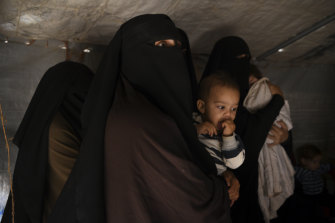 Al-Hawl detainee Zahra Ahmed holds her son Ibrahim. The Australian families are living in squalid conditions at the camp, which houses about 70,000 people.Credit:Kate Geraghty

In the tent on Australia Street, the women say the situation in the camp is so bad they cannot show their faces to help their cause as they did on Four Corners last month.

"In the camp I was actually physically assaulted because I had my face uncovered once," Ahmed said, "which is why I can't … It's really unsafe".

Their children face no such restrictions: Obeid, who takes some of his first steps for us at 19 months despite a spinal problem brought on by malnutrition; the camp's youngest Aussie citizen, two-month-old Yahya, who squirms in a white jumpsuit; and nine-year-old Maysa, who pipes shyly: "I want to go home and to school, and I want to see my sisters."

Asked if she remembers anything about Australia, Maysa says only: "My country."

'You made your bed'

"These women deserve what they get," goes one argument for why Australia should not bring them home. "They made their bed, now they must lie in it."

"It's definitely understandable," Ahmed says, but it's "really unfair".

Many here say they were victims of IS, not perpetrators. Some say they were tricked into coming to Syria or were brought by their husbands or families and quickly regretted it, trying several times to escape. Shayma Assaad was just 15 when she came with her family. 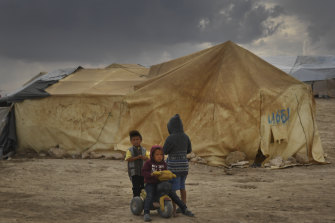 Children gather in the foreign section of the al-Hawl camp in north-east Syria.Credit:Kate Geraghty

Others, including Zahra Ahmed and her family, insist they were doing humanitarian work and were abruptly prevented from leaving when IS closed the borders of its self-proclaimed "caliphate".

Australian ministers including Mr Dutton have said they are assessing the situation case by case. But these women say they have not heard from the Australian government.

"I'd just like to know how that is [the government conducting an assessment] if he has never actually spoken to me," Ahmed says. "How?"

Meanwhile the government has removed Australian citizenship from three people it says are dual citizens. 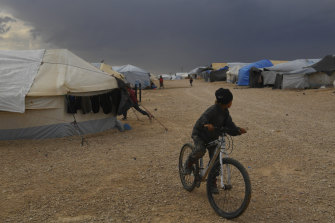 A boy on a bike looks back toward the dark clouds approaching the camp. Credit:Kate Geraghty

That's not fair either, Ahmed says. "I mean, you can make your judgment, but hear us out first."

'You and your children are radicalised'

Camp coordinator Layla Rezgar is a Kurdish official who helped rout Islamic State from their last stronghold in Baghuz. She says some of the hard-core women in the camp are going from tent to tent in the evening, teaching IS ideology.

"Now they are very strong," she says, "And because they are all dressed in black, we can't tell the difference between them and the other women."

The children throwing rocks and shouting at our car, the boys mugging for the camera with one finger pointing to the sky (a reference to strict monotheism, which IS believes sets it apart), the women punishing backsliders by killing them or torching their tents, all represent this hard core. 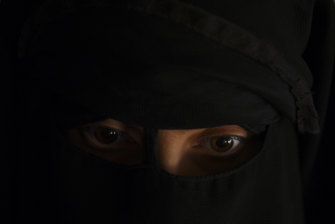 The Australian women in the camp refused to unveil their faces for fear of retribution.Credit:Kate Geraghty

Rezgar says: "The first thing they want to do is to behead us. We can't even sleep. We don't know if any time they will attack us."

On Australia Street, they know the camp is getting more radical but they insist they have nothing to do with it. "Really our kids basically just want a normal life," says Assaad, who is 19 and has four children, including brand-new baby Mariam. 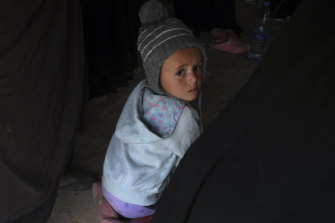 One of 46 Australian children detained in the camp housing the families of Islamic State fighters.Credit:Kate Geraghty

'It's too dangerous to get you out'

"We see helicopters circling the skies and landing and then we think 'Oh, the Spanish have left' or 'Oh, the Belgians have left' or certain children or certain women have gone. So there is still a safe route available … there are still people being extracted from the camp."

And there is a time limit, they believe: the region's harsh winter is on the way. Assaad is sick, her children are sick, and there is no longer any medical support in the camp.

"I've already lost a son to lack of medical services and I'm not ready to say goodbye to another," she says. "I had three, now I have two."

Ahmed says honey is the only medicine left in the camp for a cough, and Kawsar Abbas, an older relative who is also in the camp, said the children's winter coughs had begun after only three days of cooler weather and one thunderstorm. "One of our tents flooded and then it dried up … But winter is not going to be like that. It's not going to dry up," she said.

Some, probably children, are expected to die from exposure.

Outside the camp, tension is building. As we conducted our interviews, Turkey's proxy militias were amassing at the Syrian border waiting for a ceasefire to end and the Syrian regime was gradually increasing its footprint. Many Kurds here believe they are facing a genocide. 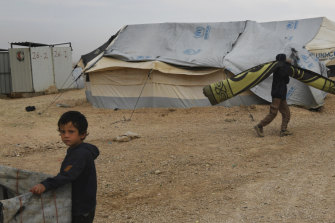 Still Rezgar remains at her post, guarding 70,000 children and women, some of whom are threatening to behead her. She wants to be out fighting for her country.

It makes her angry that Western governments have instead left her literally minding their babies.