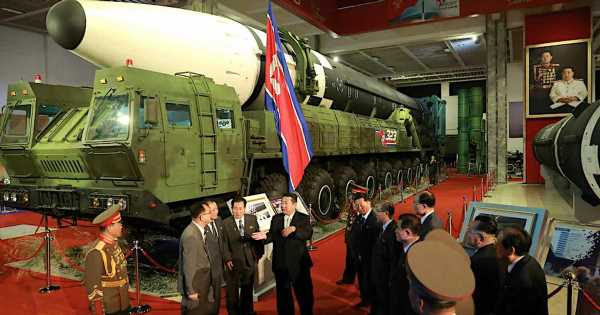 Experts on North Korea have warned that Kim Jong-un may be about to exert a period of 'extreme control' over the country after the tyrant ruler appeared in front of a collection of deadly missiles.

As part of the festivities, Kim Jong-un spoke on Monday at the Self Defence 2021 conference, showcasing the North's ever-growing arsenal of terrifying missiles.

The new Hwasong-8 hypersonic missile, which was tested last month, was displayed alongside a newly designed Hypersonic Glide Vehicle.

According to Joseph Dempsey, a research associate at the International Institute for Strategic Studies, the images confirm that the new weapon is a development on the previous Hwasong-12 missile.

Surrounded by his fearsome assembly of intercontinental ballistic weapons, Kim Jong-un accused the US of "creating regional tension with wrong decisions and action".

"The United States has recently been sending frequent signals that it is not hostile to our country, but there is no behavioural basis to believe that it is not," he declared.

"Our main enemy is the war itself, not a particular country or group like South Korea or the United States."

He added that the US and the South working together causes "many prospective dangers raising the urgency to further strengthen ourselves".

He concluded: "Even for our future generations, we must be strong. First, we must become strong and see."

The North Korean leader also made a speech on Sunday which Andrei Lankov, a North Korea expert at Kookmin University, found concerning.

Kim Jong-un repeatedly expressed the need for everyone to "implement the revolutionary idea" which Lankov took to be an assertion of his supreme power.

He told NK News: "It seems that he basically emphasizes that he would like to go back to the 1960s and 1970s, a period of extreme party control."

The 1970s in particular were a brutal period in North Korean history.

The government went about implementing Kim Il-sungism, named after Kim Jong-un's grandfather who was then the nation's leader at the time.

This involved the state attempting to assert total control in the economy to gain economic independence from China and the Soviet Union.

The result was North Korea defaulting on loans halfway through the decade, causing economic growth and living standards to plummet significantly.

Lates News:
2021-10-12
Previous Post: Humiliation for Macron as EU slaps down anti-UK statement on fishing
Next Post: Ethereum ($ETH) Will Be the Next Cryptocurrency to Explode, Says HIVE Blockchain Chairman