College football begins in earnest this week with a nine-game slate of action, with seven of those games coming on Saturday. It’s not exactly a murderer’s row of heavyweight matchups, but our path to the 2021 NFL draft begins in earnest here.

With about a half-dozen or more draftable talents in action — including one very interesting QB-WR tandem — there is enough to whet our draft appetites.

Here are prospects we’ll most be keyed in on in Saturday’s contests:

It would be surprising if this game is a huge test for the Mustangs, but Buechele started last season slowly and actually threw two picks in the 30-point win over Texas State in 2019.

Despite being undersized, he has a chance to be drafted next year — right now he’s on the Day 3 spectrum — but cleaning up some of the bits of sloppy tape and being more consistent this season are keys for the intriguing Buechele. He’s a gunslinger, and that style brings both good and bad. 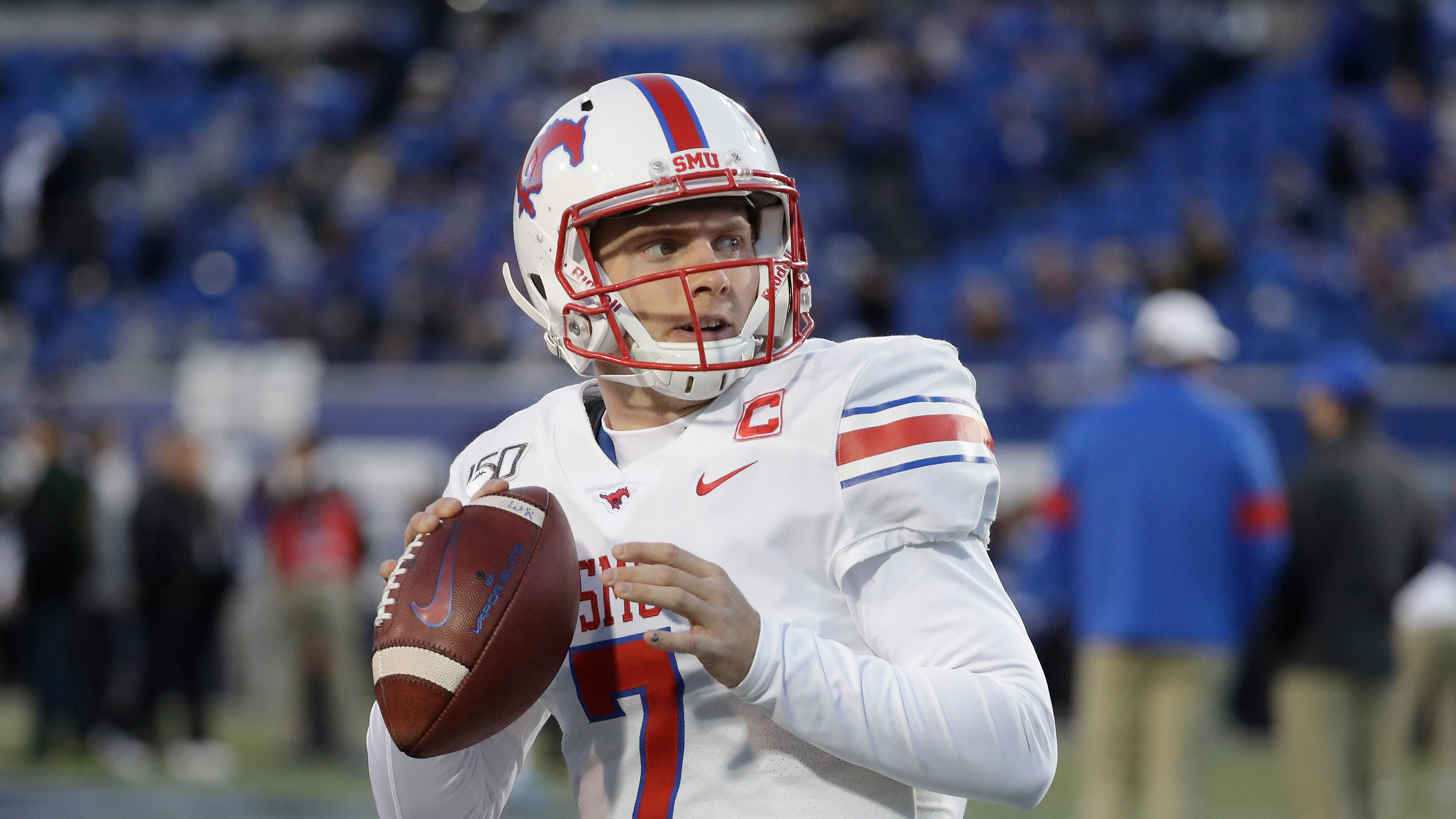 But the player we’re most jazzed to see in this one is Roberson, who suffered a season-ending foot injury that cut short what was a brilliant season. He’s a deep threat with some nice route subtlety to his game. Now it’s Roberson’s time to shine in a featured role with Baltimore Ravens sixth-rounder James Proche gone, and the 5-foot-11, 200-pound Roberson has a chance to be drafted much higher than Proche.

Roberson profiles in the third- or fourth-round range as things stand right now, after he briefly considered coming out early for the 2020 draft. We’re glad he’s returned to work with Buechele again this year, as a full season together could help each boost their draft stocks in their final seasons.

He’s not quite an Ashtyn Davis-caliber of athlete, but Blankenship could see a rise this season similar to Davis’ — a New York Jets third-rounder this spring — a year ago. Blankenship is a really good athlete who can cover a lot of ground as a center fielder, can man slot coverage ably and carries surprising strength to handle box duty.

That latter skill will be how Blankenship likely will be most tested against an Army team that averaged fewer than 10 passes a game. The one big area we need to see improvement is tackling. He can fly into the picture and bounce off tackle attempts, failing to wrap up and drag down opponents with proper form. 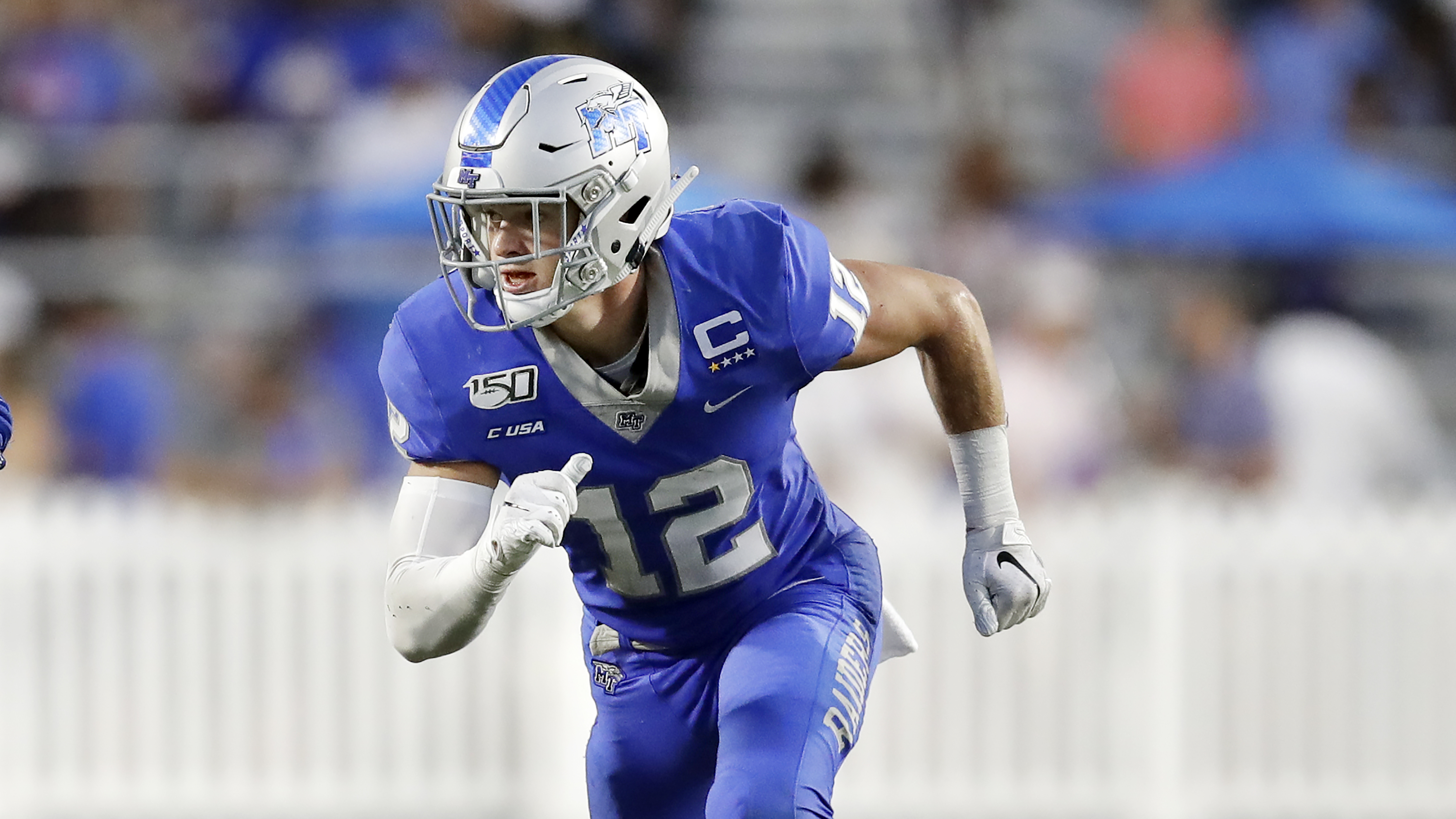 But there’s a lot to like about his NFL ability. And keep an eye on special teams, too: Despite playing only seven games last season because of a broken ankle, Blankenship tied for the national lead with two blocked kicks.

There are a few other draft prospects to watch in this game, including two receivers in Memphis’ Damonte Coxie and Arkansas State’s Jonathan Adams. But our eyes will be glued to the middle of the trenches, where Merrill plays — and he’s hard to miss.

The 6-1, 338-pound, redheaded Merrill is a squarely built, throwback defensive tackle. He figures to be a nose tackle at the next level, but the Red Wolves move him around the interior at multiple techniques. They suffered a huge dropoff inside when Merrill’s 2019 campaign was cut short with a torn biceps.

This play stood out when watching Merrill. In the fourth quarter of a game against up-tempo SMU, Merrill quickly dispatches the center and takes down the Mustangs’ back for a big tackle for loss. Merrill showed incredible stamina in this game, playing 71 snaps and making his impact felt throughout the game with eight tackles.

He’s a Day 3 prospect right now but can boost his stock with a healthy, productive final season. Memphis lost its starting center (2020 seventh-rounder Dustin Woodard, who just retired from football) and will be breaking in someone new in the pivot, so Merrill might be able to do some work inside.

His ascendence after transferring from Missouri State, via Northeastern Oklahoma A&M, makes him a great draft story to follow this season.

Yet another interesting man of mass, Tonga openly spoke one year ago of his desire to enter the 2020 NFL draft, but his parents helped talk him into one more year of college. The 6-3, 323-pounder has good length and plays with leverage. He’s not quite the space eater/lane clogger you might expect for a man his size, but Tonga’s skill set is fairly impressive on the whole.

The best game I watched of him this summer was against USC, when he was absolutely firing off the ball early on (despite getting banged up the prior two games). Tonga’s first-quarter performance against the Trojans might actually have been the best quarter I saw from a defensive lineman in this upcoming draft class.

Watch as he just bullies USC OG Jalen McKenzie and drives him back into QB Kedon Slovis for the sack. This was about his third disruptive play in about a five-snap span in this game:

Navy’s smallish interior offensive line is a quick, cut-blocking group, so I’ll be watching to see how Tonga keeps his balance, reads the run-game flow and uses his length and power to try to dominate.

The Cougars took a hit in this one with senior TE Matt Bushman suffering a season-ending ruptured Achilles tendon. The redshirt senior has NFL ability, and he considered entering the 2020 NFL draft, but his age and injury history figure to be considerable flags next spring.

The junior-college transfer spent his first two years at Florida State, and Ball was actually the Seminoles’ starting left tackle for their final nine games of 2017 before being dismissed from school after being accused of dating violence by his then-girlfriend. (Charges were never filed in the case.)

After a stint at Butler Community College, Ball jumped into the mix for the Thundering Herd last year — but interestingly only started a single game despite receiving significant snaps at left tackle a year ago.

The 6-foot-8, 310-pound Ball has NFL ability and earned some early Day 3 grades from scouts this summer, even if he’ll have to answer some character concerns that might linger. His surprising athleticism and big, heavy hands are projectable traits.

He’s slated to play both tackle spots again but has more experience on the left side. Eastern Kentucky won’t be a great test for Ball, but it will be interesting to see how the Herd utilize their tackles in Ball’s final season. They have a good run game led by RB Brenden Knox, also a possible 2021 draft pick.