India rape victim dies after being set on fire by gang

A rape victim set on fire on her way to court by a gang of men, including her suspected attacker, has died in a New Delhi hospital.

The 23-year-old woman had been travelling to a hearing for her case in the Indian state of Uttar Pradesh when she was doused with paraffin and set ablaze.

It is the second deadly attack against a woman in recent weeks, causing a public backlash across the country. The victim suffered extensive injuries and was airlifted to Safdarjung Hospital in New Delhi, where she died of a cardiac arrest.

Dr Shalab Kumar, head of the hospital’s burns unit, said she had suffered 95% burns and that “toxic and hot fumes” had filled her lungs.

Five men have been arrested in connection with the fire attack.

The woman had lodged a complaint with police in March claiming she had been raped at gun-point last December.

Her alleged rapist was jailed, but was released last week on bail.

It follows a similar case in the state in which a woman, who accused a BJP politician of rape, was severely injured in a vehicle hit-and-run.

Uttar Pradesh has become notorious for its poor record of crimes against women, with more than 4,200 cases of rape reported there in 2017 – the highest in the country. 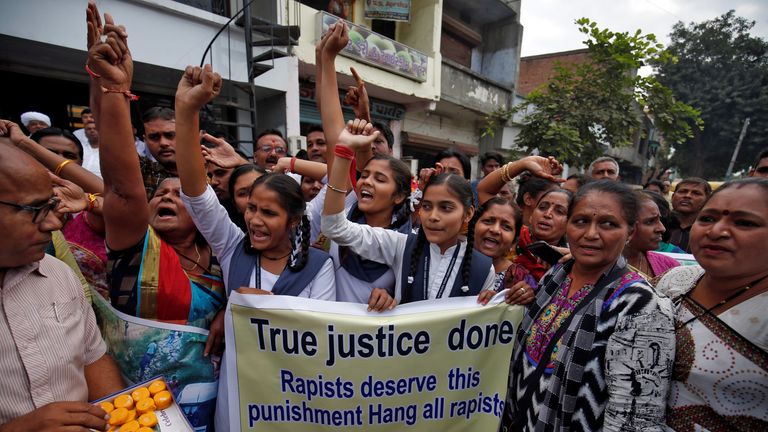 The burns victim’s death came on the same day that police in the southern state of Telangana shot dead four men being held on suspicion of raping and killing a 27-year-old vet.

Their deaths have drawn both praise and condemnation in a case that has sparked protests across the country.

The woman’s burned body was found last week by a passer-by near the city of Hyderabad, after she went missing the previous night.

Investigators took the four suspects, who had not been charged, to the crime scene.

They said the men grabbed guns from their police escort, began shooting and were killed when officers returned fire.

A court hearing is to be held into the case, while separately, the national commission on human rights, an autonomous body within India’s parliament, sent a fact-finding mission to investigate, amid questions from opposition politicians about the circumstances of the suspects’ deaths.