Victorians have been promised a summer that seemed impossible a few months ago, with family gatherings, travel, in-store Christmas shopping and the ability to remove masks in public now permitted after 23 days without a new coronavirus infection.

Premier Daniel Andrews announced widespread changes to coronavirus restrictions in the state on Sunday that included the scrapping of a requirement for masks to be worn outdoors when physical distancing is possible, which comes into effect at 11.59pm Sunday. 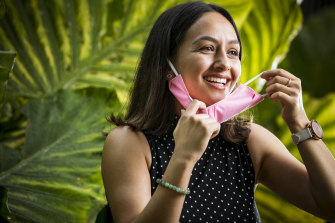 Zahra Abbass of Malvern is happy to be able to remove her mask on her next walk. Credit:Chris Hopkins

And while there will be no crowds at Carols by Candlelight and no New Year's Eve fireworks display, holiday gatherings of family and friends will resemble pre-pandemic times, with a new cap of 15 visitors to a home on a single day set to be lifted to 30 people at 11.59pm on December 13, in time for Christmas and part-way through Hanukkah celebrations.

"[The latest coronavirus numbers] are a testament to the character and the conviction and the amazing job that every single Victorian has done this year," Mr Andrews said.

"Each of us playing our part to make sure that we protect public health, that we value and protect this precious thing that we have built … It's incredibly valuable, but it is fragile. And even though these rules are important changes, this virus is not gone."

Restrictions could ease further before the end of the year, with the Premier flagging ongoing reviews of the state's coronavirus restrictions, which also include offices returning to 25 per cent capacity, more patrons in cafes and restaurants, universities and TAFE resuming classes and up to 150 people at weddings and funerals.

It's definitely really exciting not to have to wear a mask. It feels like you are one step closer to freedom.

Some epidemiologists told The Age the state government should consider bringing more people back to offices and increasing gathering size and venue limits ahead of its next review of restrictions on December 6.

Victoria's Chief Health Officer Brett Sutton declared on Sunday he was confident community transmission of coronavirus in the state had now ceased, with no COVID-19 deaths or infections for 23 days.

"That will be an ongoing risk until there is a substantial rollout of vaccines across the world, and that is some months away, at least six months," Professor Sutton said.

"And we're not going to get full coverage of vaccinations for all of our international arrivals for an even longer period of time, so we just have to be mindful of these things that we're going to have in place: distancing, use of masks, hand hygiene, cough etiquette. They are our insurance policy for any incursion that may happen into the future." 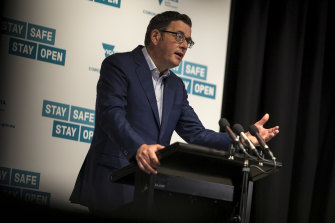 Premier Daniel Andrews thanked Victorians for their efforts to contain the spread of COVID-19. Credit:Chris Hopkins

The reversal of the state's fortunes follows a second wave of coronavirus that claimed the lives of almost 800 people, infected more than 20,000 and cost the economy billions of dollars after the virus was transmitted into the community by guards working on the state's hotel quarantine scheme for international travellers.

Earlier on Sunday, South Australia's Opposition Leader urged the state government to put an end to its "medi-hotel" program after an outbreak that began at a quarantine hotel forced the state into a strict six-day lockdown.

Under the new changes to restrictions announced in Victoria on Sunday, indoor religious gatherings have been capped at 150, while up to 300 people will be allowed at outdoor religious ceremonies. And 150 guests will be permitted at weddings and funerals, with a maximum density of one person per four square metres.

Workers will be allowed to return to their offices in limited numbers, although public servants will continue working from home to reduce the number of people travelling to the city. Patron limits on hospitality venues will be increased and higher education students and staff can return to campus.

Zahra Abbass, 25, has spent a lot of time wearing a mask throughout the pandemic, due to her work as a receptionist. She said it would be a relief to know she could go outside for a walk and take it off.

"It's beginning to feel a lot like Victoria again and what a fantastic announcement for businesses today, and effectively with the announcements today, every business can get on with doing what they love best," said chief executive Paul Guerra.

"We look forward to [caps on venues] being scrapped, but for now it's appropriate. While we've done a great job at suppressing this virus, we're seeing in other states how easily it can come back. So, you know, the limit of 150 is more than what everyone thought we were going to get, so fabulous on the government for bringing that forward."

Opposition Leader Michael O'Brien welcomed the latest easing of restrictions, but said more rules could have been safely rolled back. He queried the government's "arbitrary" cap on venues and the decision to prevent public servants from returning to the office.

The Islamic Council of Victoria and Anglican Diocese of Melbourne broadly welcomed the changes to religious gatherings and ceremonies, but urged the government to consider scrapping the cap on venues, arguing places of worship were generally big buildings where people wear masks and can social distance.

ICV vice-president Adel Salman said: "We're happy about the lifting of restrictions, but we see there's opportunity to improve things. We definitely appreciate that we're now allowed 150 indoors, and I think that's great."

Bishop Paul Barker said: "You can go to a restaurant to eat without a mask, people often talking a bit loudly, droplets going across the tables. In places of worship, we wear masks and we observe social distancing. We still think the government is not treating people with the utmost fairness."

Some epidemiologists also suggested limits on venues could be reviewed.

Professor Catherine Bennett said she would like the focus to shift to increasing the number of workers who can return to the office, and she is advocating for the scrapping of venue caps in favour of density limits when the government reviews restrictions on December 6.

"We know with this virus, the cycle is essentially between workplaces and homes … so that's where most of the spread happens," Professor Bennett said. "We want to get people back to work. Holding back on further home visits helps contain this idea of potential outbreaks because you're just breaking some of those cycles where the virus transmits."

La Trobe University's Hassan Vally said: "I guess once we have satisfied the epidemiological criteria for elimination of the virus, the next lot of relaxation of restrictions should see us move to what COVID-normal will be until we have the vaccine.

"For example, this would involve moving towards allowing gathering sizes that we are happy balances risks with benefits, and allowing other 'high-risk' places like pubs and gyms to operate in a more viable way. I think mask-wearing where social distancing is not able to occur is here to stay for some time."

Professor Tony Blakely said the more Victoria reopened its economy and increased social gatherings, "the more we are a tinder box like Western Australia, where if the virus got in, it would just go boom".

"I doubt we’ll be opening up the MCG – I think 25 per cent is about as much as we’ll get. With restaurants, I suspect the easing – two square metres per person – I think that’s as far as it will go. This is how we’re going to be functioning going forward," he said.

The Burnet Institute's Mike Toole said the changes were "sensible", but he remained "nervous" about increasing the number of visitors allowed in homes to 15, and then 30 from mid-December.

"My principle is gradual, gradual, gradual … I've no way of being able to differentiate on the effects 25 per cent of workers returning to the office versus 40 per cent, it's impossible to model at this stage, but keeping public servants out of the office is a good idea."

Professor Adrian Esterman, chair of biostatistics at the University of South Australia, said he found it unusual the Premier had decided to relax mask-wearing rules.

"[It] is a bit strange because they are one of the low-hanging fruit that is easy to use and does not cost the economy," Professor Esterman said.

"They are cheap. I'm not quite sure why they would suggest people don't wear them at least for another week."