Former Australian Rugby League Commission chair Peter Beattie reconsidered his recommendation of Peter V'landys as his successor after viewing the ABC's investigation into the horse racing industry, the federal court has heard.

Beattie was brought forward as a witness on Thursday in defamation proceedings between Racing NSW boss Peter V'landys and the Australia Broadcasting Corporation, over a two-year investigation entitled The Final Race.

The exposé, which was aired on ABC's 7.30 last year, outlined allegations of cruelty to racehorses on a mass scale.

The former Queensland premier said he watched "most of" the program the day it aired on October 17, just 13 days before V'landys was set to succeed Beattie as ARLC chair.

"I had gone out on a limb to support him. I was concerned that if it was true, it would damage his reputation amongst the other commissioners," he said. "We were bringing in these tough new rules about player behaviour and integrity, we had also just suspended a player under the new no-fault stand down rule.

He said there was "opposition" within the NRL and "within the commission themselves" to V'landys' appointment, with Beattie convincing them otherwise. 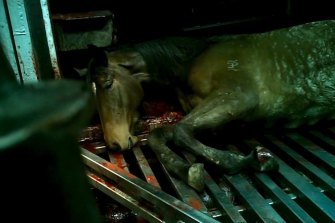 "I was unaware of what the [interview] questions were going to be, but I thought it was going to show how good NSW were doing," V'landys told the court.

The ABC's lawyer Sandy Dawson said the defamation case "against the ABC and a respected journalist" were "misconceived rubbish".

On Wednesday during the first day of the hearing, the court heard how V'landys was subject to an "absolute firestorm of abuse" after the program went to air with a member of the public telling him he wished his "kids got cancer".

Mr Dawson put to V'landys during cross-examination that those who "abused" him were attacking Racing NSW as an organisation, not the Racing NSW boss personally.

V'landys "did not accept" his suggestion and said that he "interpreted" abusive emails to Racing NSW as a personal attack "towards me as the face of the [ABC] program".