I-70 mudslides: Feds to reimburse another $10 million for cleanup 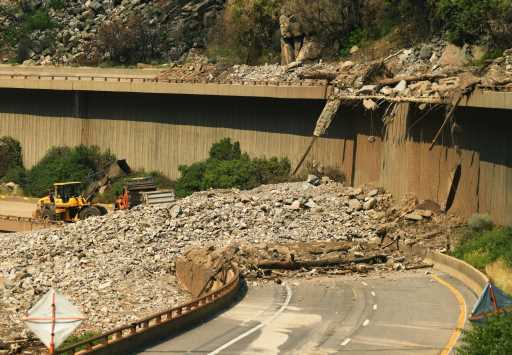 Colorado will receive nearly $10 million to help offset the costs of emergency cleanup and prevention efforts after catastrophic mudslides last summer in Glenwood Canyon sent debris flowing onto Interstate 70 and into the Colorado River.

Nearly $9.7 million is earmarked for Glenwood Canyon-related reimbursements in a new $10.4 million award for Colorado projects that was announced Wednesday morning by the Federal Highway Administration. The Emergency Relief Program is providing $513.2 million for road and bridge repair efforts across the country.

The state previously received $11.6 million in “quick release” funding from the FHWA in the aftermath of the late July 2021 mudslides in Glenwood Canyon, the worst of several debris flows that summer. They were triggered by heavy rainfall on the burn scar from the 2020 Grizzly Creek fire, sending mud and rocks sliding down the canyon walls. The late July mudslides closed I-70 for two weeks.

All told, the Colorado Department of Transportation says costs stemming from those mudslides have reached $32 million.

An accounting provided by CDOT shows it spent $19.1 million for emergency road repairs and debris removal in key gulches, along with managing closures and traffic detours; $6.3 million for mitigation projects, including the installation of fencing and other barriers to reduce or block debris flows; and $6.6 million to remove trees, rocks and other debris from the Colorado River at several locations last winter.

Including the new money, the FHWA reimbursements total $21.3 million. It’s unclear if CDOT will apply for more under the program.

In the meantime, CDOT spokesman Matt Inzeo said the Colorado Transportation Commission fronted $14 million in contingency money that’s been drawn down, while other costs were covered through CDOT’s budget. CDOT plans to repay the contingency money as more reimbursements come in, he said.

“The incredibly fast turnaround on quick-release dollars last year gave us the reassurance to move just as fast on the next steps of the emergency rebuild,” Inzeo wrote in an email. “This announcement certainly helps our efforts and continues the great federal-state partnership as we rebuild and make the transportation network more resilient in the area.”

With the slide risk expected to continue for another couple years, CDOT has closed I-70 through the canyon several times this summer during flash-flood warnings. So far, no major new mudslides have affected the highway.