How humans could have spread cancer across the seas

New York: Humans have spread a contagious form of cancer around the world. 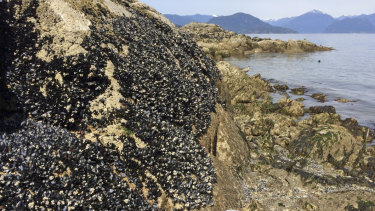 Mussels on a dock in France. A cancer afflicting mussels originated off the Pacific coast of Canada, but then crossed into other species in Europe and South America. Credit:New York Times

"There's no natural explanation for how that happened without human help," said Michael Metzger, a biologist at the Pacific Northwest Research Institute in Seattle and a co-author of the report, published in the journal eLife.

In its familiar form, cancer arises when cells gain new mutations and begin to multiply aggressively. But these lineages of cancer are short-lived. Some of them are killed by our immune systems or drugs used to combat them. Other cancers die when they kill their hosts.

In the 1990s, researchers discovered an exception: Tasmanian devils suddenly began developing tumours on their faces. The DNA in the tumours did not match that of the afflicted animals, and scientists deduced that the cancers were coming from other devils. 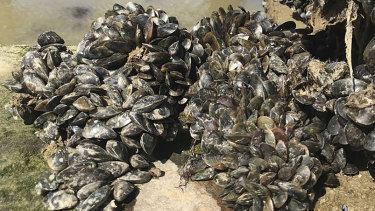 New findings around cancer in animals: mussels on a dock in France. Credit:The New York Times

As it turned out, when Tasmanian devils bite one another, they may swallow tumour cells that make their way to the faces of their new hosts.

Researchers later discovered that dogs also have a transmissible form of cancer, which spreads when dogs mate. In a study published in August, Elizabeth Murchison of the University of Cambridge in Britain and her colleagues analysed the genomes of dog cancer cells from around the world.

They concluded that the cancer arose in a dog that lived several thousand years ago in Asia. The Tasmanian devil facial tumours, by contrast, appeared within just the past few decades, on two separate occasions.

While working as a postdoctoral researcher at Columbia University, Metzger discovered that four species of shellfish — including soft-shell clams and bay mussels — had transmissible cancers of their own. It was the first time anyone had discovered contagious cancer in aquatic animals.

Metzger and his colleagues suspect that sick shellfish release cancer cells. The cells float along the currents until they are sucked up by healthy animals as they filter seawater for food. In one case, the researchers found, the cancer cells had moved from one species of shellfish into another.

Nicolas Bierne, a geneticist at the University of Montpellier in France who studies blue mussels, realised that this finding perhaps held the solution to a mystery that he had been struggling with.

Analysing the DNA from blue mussels in France, he and his colleagues had discovered some genetic markers that looked as if they belonged to another species: bay mussels. He might have expected such a result if these species interbred — but bay mussels don't even live in French waters.

"It was a puzzle for me," Bierne said. "Why do I sometimes find what looks like a hybrid, but I never find one of the parent species?"

Cancer might be the answer. Metzger had found a contagious form of cancer in bay mussels on the Pacific coast of Canada. Perhaps, Bierne thought, his blue mussels had been attacked by bay mussel cancer cells.

He and his colleagues isolated cancer cells from French blue mussels and analysed their DNA. It turned out to be profoundly different from the DNA of the healthy cells, more closely related to that of bay mussels.

Meanwhile, a team of South American researchers got in touch with Metzger with another potential case of contagious cancer. On the coasts of both Argentina and Chile, Nuria Vázquez of the Institute of the Biology of Marine Organisms in Argentina and her colleagues found beds of mussels in which as many as 13 per cent of the animals were sick.

And when they looked at the cancers under a microscope, the cells had an unusual rounded shape that Metzger had found in contagious cancers. Analysing the DNA, the researchers determined that the Chilean mussels had contagious cancer, too. Once again, bay mussels were the source.

The biggest surprise of the research came when the scientists combined their research on all three species of mussels from all three continents. The cancer in the French blue mussels and the cancer in the Chilean mussels turned out to be practically identical.

The scientists have put together a scenario to explain all their findings.

In the Pacific, a bay mussel developed cancer. The cancer then spread to other bay mussels along the coast. Metzger and his colleagues have named this lineage of cancer BTN1.

Independently, a second bay mussel developed contagious cancer of its own. The scientists named this second strain BTN2.

BTN2's genes show that it came from a bay mussel. But no one has found the cancer in a bay mussel. It's possible that bay mussels became resistant to BTN2. But the cancer lives on, because it has managed to jump into both blue mussels and Chilean mussels.

The exact route of transmission is still unknown, but the journey must have been lengthy, since the Chilean mussels and blue mussels are separated by several thousand kilometres. Metzger and his colleagues argue that the cancer cells couldn't have made the trip on their own.

For one thing, ocean currents would have prevented the cells from crossing the Equator. Instead, Metzger thinks, humans gave cancer cells a ride. Mussels and other shellfish readily grow on the sides of ships. In some cases, the ships have transported them to new ranges where they become invasive species.

One of these voyages may have delivered cancer to a new home as well. "All you'd need was one diseased animal," Metzger said.

Murchison has also found signs of human influence in her study of dog cancer. Canine transmissible venereal tumour, as the condition is known, was limited at first to a small group of dogs somewhere in Asia.

But about 2,000 years ago, the cancer spread along the Silk Route. About 500 years ago, it popped up in the Americas, and in the 19th century it spread to most of the world, including remote islands.

Some scientists are confident that there are many more contagious cancers to find in shellfish — and not just in shellfish.

"I'm starting to believe that transmissible cancers are much more common than we have previously thought, particularly in aquatic ecosystems," said Beata Ujvari, an evolutionary biologist at Deakin University in Australia who was not involved in the new study.

In fact, scientists may already have the evidence without realising it.

Geneticists who find odd DNA sequences tend to dismiss them as contamination or hybridisation. The researchers may actually be looking at more cancers that have broken free from their hosts.

"Perhaps we have to open our imaginations a bit more," Murchison said.