Hong Kong leader slams protesters for ‘blatant riot’ as authorities insist they will push ahead with extradition bill. 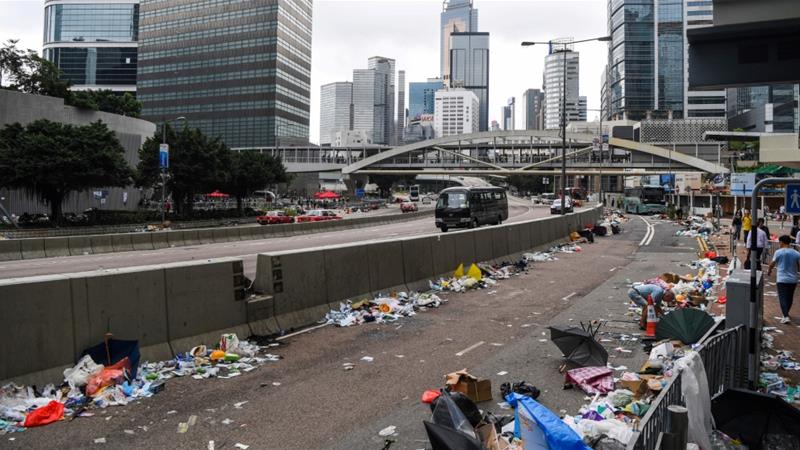 The authorities in Hong Kong on Thursday closed government offices in the heart of the city after mass protests against a controversial extradition bill that would allow extradition of people to the Chinese mainland.

The embattled leader of the semi-autonomous Chinese territory has described the protests as politically motivated “riots” and condemned protesters who resorted to “dangerous and life-threatening acts.”

Chief Executive Carrie Lam has defended the highly controversial bill, insisting the legal changes were crucial to the territory’s future.

Outside the Legislative Council and main government building where police used rubber bullets, tear gas and pepper spray into the night against the protesters on Wednesday, barricades were being removed and rubbish cleared. Heavy rain kept many away.

Al Jazeera’s Sarah Clarke, reporting from Hong Kong, said the police had pushed the crowd to the neighbouring Central district before people finally went home at around 2am local time (18:00GMT).

“The streets are clear (and) the clean-up is under way,” she said. “We are starting to see traffic resume on these roads that were paralysed for most of Wednesday.”

Thousands of people surrounded Legco [the legislative building] on Wednesday morning ahead of a scheduled second debate on the extradition bill.

Critics fear the amendments will undermine Hong Kong’s judicial independence and further erode the freedoms guaranteed to the city under the ‘one country two systems’ when it was returned to China by the British in 1997.

The protests followed a march on Sunday that brought an estimated one million people onto the streets.

The demonstrations forced the debate to be postponed to an unspecified date, but the mood turned ugly when some of the crowd tried to get through the barricades and into the building.

Lam has said she wants the bill passed before the assembly is dissolved for the summer break at the end of the month. It is not clear when it will next be tabled.

The Chief Executive said the protests were “organised riots,” and in an emotional television interview rejected accusations that she was betraying Hong Kong by pushing ahead with the proposals in defiance of public opinion. 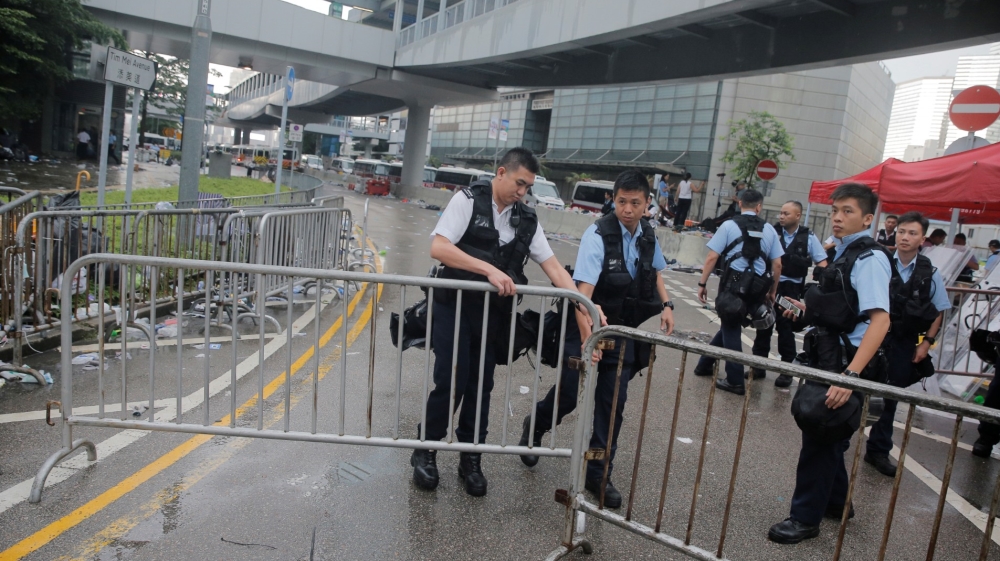 “I would not do anything that is not in the interests of Hong Kong,” she said, stressing again that she was committed to the revised extradition bill.

On Monday, the US Department of State, said that Washington was concerned the proposals would damage Hong Kong’s business environment “and subject our citizens residing in or visiting Hong Kong to China’s capricious judicial system”.

But President Donald Trump appeared to take a cautious line when he was asked about the protests.

“That was as big a demonstration as I’ve ever seen,” he said. “I hope that it all works out for China and Hong Kong.”

But House Speaker Nancy Pelosi, expressing support for the protesters, said the US might have to “reassess” Hong Kong’s semi-autonomous status if the bill were passed, putting the territory’s preferential ties with the world’s biggest economy at risk. 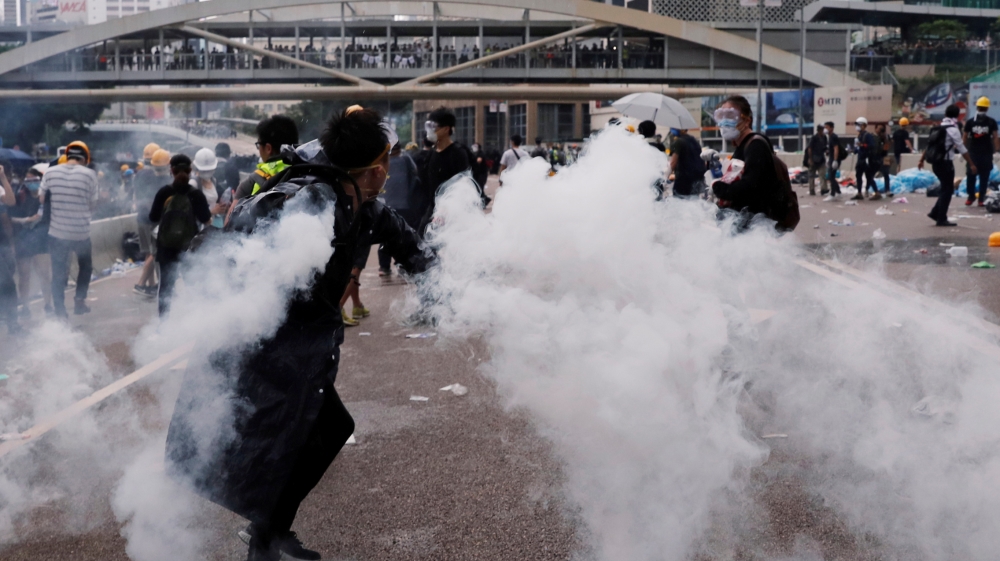 The US came in for particular criticism as China’s state-run media condemned the protests, those campaigning against the bill and Western critics.

A Global Times editorial said “only the callous would cheer the disorder in Hong Kong” and that it was the  “brutal interpretation” of the bill by its opponents inlcuding the US that had made the protesters “lose all rationality”.

The China Daily denounced the “lawlessness” of the unrest, illustrating the column with a photograph of a bloodied policeman.

Al Jazeera’s Adrian Brown, reporting from Beijing, said state-run television in Beijing had broadcast pictures of the unrest for the first time on Thursday morning.

“Most major Chinese companies when they list on the Hong Kong stock market, so there China has an awful lot invested in Hong Kong and will want to ensure that the protests come to an end and investors don’t have second thoughts about staying in Hong Kong,” he said. 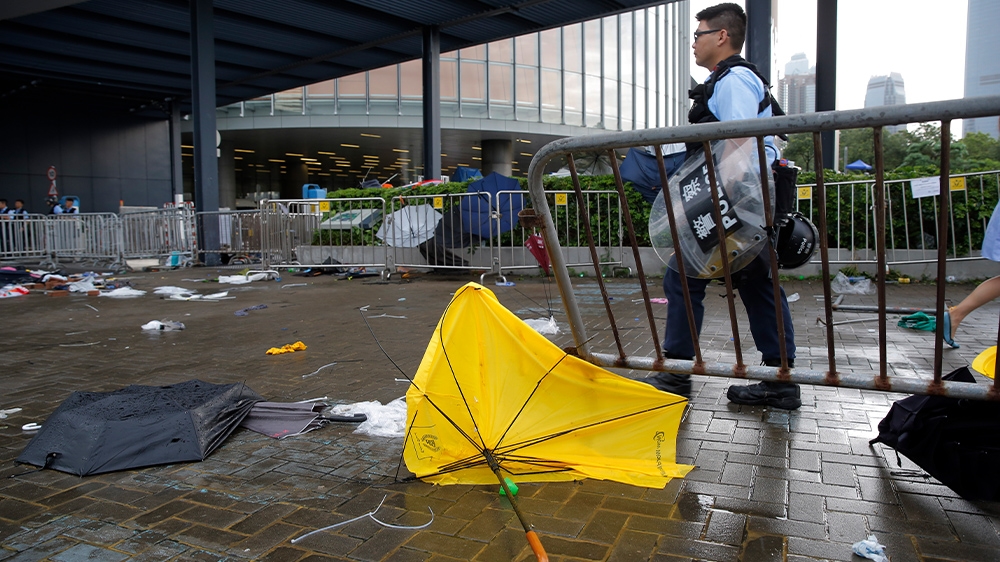 The European Union, which has raised concern about the implications of the amendments, urged restraint.

“Over the past days, the people of Hong Kong have exercised their fundamental right to assemble and express themselves freely and peacefully,” a statement issued by the EU’s external affairs arm said.

“These rights need to be respected. Restraint should be exercised by all sides; violence and escalatory responses must be avoided.”

At least 72 people were taken to hospital after the protests turned ugly on Wednesday. Most were released after treatment although two were said to be in a serious condition. The latest violence in Hong Kong’s ongoing protests is the worst in more than two decades. 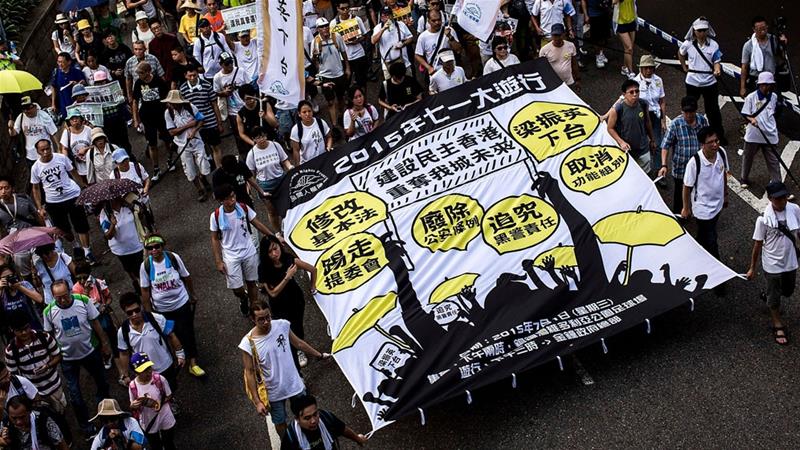 What is driving Hong Kong-China tensions?