Atlanta, Georgia: On the second-last day of early voting in Georgia, a line is snaking around the entry to the Cobb County Board of Elections office. As a reward for casting their ballots, voters are being served complimentary "democracy tortillas" filled with their choice of scrambled eggs, bacon, shrimp and sausage. Next to the buffet, a food truck is handing out complimentary coffee, smoothies and donuts. Adidas workers are offering goodie bags with face masks, rain ponchos and bottles of hand sanitiser.

It would be unpatriotic to say it's better than an election day sausage sizzle. But it's pretty damn good.

Andre Williams showed up at 6.30am so he could vote as soon as the early voting centre opened its doors at 7 o'clock. But there were delays: a tropical hurricane blew through overnight with 80 kilometre an hour winds, causing mass power outages in the area. Three-and-a-bit hours after showing up, Williams emerges from the polling place proudly wearing his "I secured my vote" sticker. 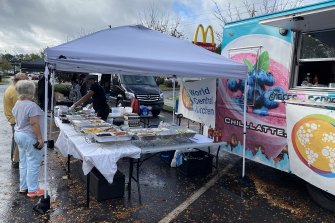 "I brought a stool with me because I was prepared to wait for eight hours," the 31-year old says. Williams, who moved to the US from Jamaica in 2008, voted for Democratic nominee Joe Biden.

"I was born in one of the shithole countries the president talks about," he says. "Biden is not perfect. I'm voting for someone who believes in equality and can admit mistakes." 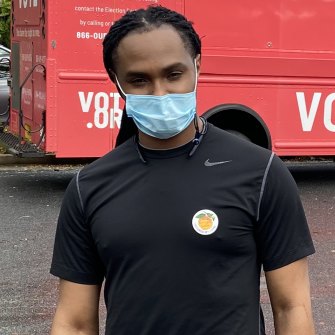 Sean Mac, who runs a pretzel company, voted for President Donald Trump. "I wouldn't say to my kid, 'I want you to be like him'," he says. But he believes Trump is better for the economy: "Joe Biden wants to raise taxes. I'm a small business owner hit by the coronavirus. I couldn't make much less and still survive."

Williams and Mac are two of the more than 80 million Americans who have already voted in the presidential election, a figure that has the nation on track to record its highest turnout since 1908. It’s a sign of the enormous enthusiasm voters across the country feel about the election: they actually agree with the candidates when they say this is one of the most important elections in their lifetime.

In Georgia 3.4 million people have already voted – 82 per cent of the total votes cast from four years ago. Over the past four decades, the Peach State has been among the safest Republican territories in the country. No Democratic nominee has carried Georgia since 1992. But the state is rapidly becoming younger, more diverse and more progressive, turning it into a highly competitive battleground.

You can see the change here Cobb County, which covers the affluent suburbs north of Atlanta. Mitt Romney defeated Barack Obama here by 12 points in 2012; four years later Hillary Clinton carried the county by two points. This year Democrats are hoping even bigger gains in cities and suburbs will help them turn Georgia blue. Polling averages show Biden and Trump in a statistical tie in the state.

Biden visited the state for two events this week: a speech in Warm Springs, a historic town in the western part of the state, and a drive-in rally in Atlanta. It’s a sign that the Biden campaign feels confident about scoring a big win on November 3 – even as they insist they are not being complacent. Before election day, Biden will also travel to Iowa, a state Trump easily carried in 2016 and is unlikely to prove decisive on election night.

Even as they dare to dream that the Trump era may be coming to an end, rank-and-file Democrats remain petrified of a repeat of Clinton’s shock defeat in 2016. It’s a feeling Trump has been happy to encourage as election day approaches.

"We are going to win this election so big – you watch," the President said at a rally this week to loud applause from his supporters.

'Believe me, they're being careful'

Since he started his publication Sabato’s Crystal Ball in 2002, University of Virginia politics professor Larry Sabato has been one of the most respected election forecasters in the country. Then 2016 happened. Like the betting markets and almost all the pollsters, he got the result completely wrong.

Sabato’s final election forecast predicted Hillary Clinton would receive 332 electoral votes to 216 for Republican Donald Trump. It was the most inaccurate prediction in the website’s history.

"Well, what can we say – we blew it," Sabato and his colleagues wrote in a mea culpa to readers after election day.

"We heard for months from many of you, saying that we were underestimating the size of a potential hidden Trump vote and his ability to win. We didn’t believe it, and we were wrong. The Crystal Ball is shattered."

The site performed well in 2018 midterms – picking every Senate race bar one correctly and predicting the Democrats’ big gains in the House of Representatives.

But the pressure is intense to get this year’s presidential race right. When the publication releases its final forecast next week it will predict a Biden victory.

"I believe Biden will win," Sabato says. He thinks it will be by a substantial margin – something similar to Obama’s 2008 victory over John McCain. 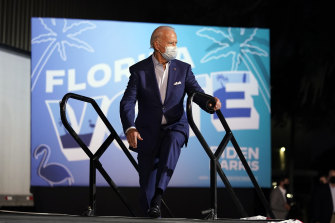 With five days remaining until election day Biden leads polls by 7.4 per cent in RealClearPolitics average. At the same stage of the 2016 campaign, Hillary Clinton was leading by just 1.6 percentage points. Polling guru Nate Silvers’ FiveThirtyEight site gives Trump just a one in ten chance of victory – significantly less than its 2016 forecast.

"I believe that the data I have lived with for my life – not just polling but analytics, demographics and other things – cannot be so wrong twice in a row," Sabato says.

He says some polls are laughably wrong – like a Washington Post survey this week showing Biden ahead by 17 points in the pivotal state of Wisconsin. But overall he says the pollsters have worked hard to correct their methods from 2016 – especially their failure to adequately represent the white voters without a college degree who form the core of Trump’s voting base. He says there have also been many more polls conducted in the swing states, reducing the likelihood of mistakes.

"Believe me, they're being careful," Sabato says of the pollsters. "They know that if they blow it for two presidential elections in a row no-one will bother reading them anymore."

With coronavirus cases rising across the country, Trump has been looking for a positive message for the final days of the campaign. He got that on Friday (AEDT) when the latest data showed the US economy expanded by a whopping annualised rate of 33 per cent in the third quarter.

"GDP number just announced," Trump wrote on Twitter. "Biggest and Best in the History of our Country, and not even close…So glad this great GDP number came out before November 3rd." 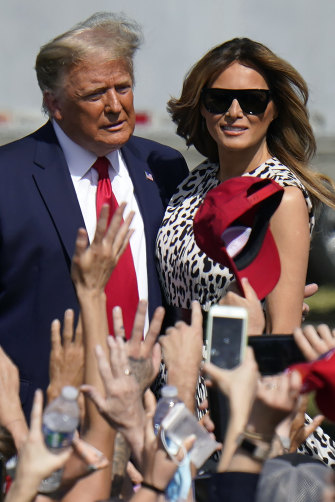 "This election is a choice between a Trump super recovery and Biden super depression," Biden has said at multiple rallies in recent days. It's a message Republican startegists wish he would hammer even more: polls show most Americans believe Trump would better manage the economy than Biden.

But Trump has continued to highlight more esoteric issues such as Hunter Biden’s laptop and censorship by social media companies. He also continues to downplay the seriousness of the coronavirus pandemic that has killed almost 230,000 Americans.

Regardless of the polls, support from Trump's supporter base remains as intense as ever – as seen in the packed crowds at his rallies. Trump supporters also inevitably show up in force at Biden campaign events to promote their candidate.

In the final days of the campaign Biden has remained focussed on the themes that have dominated his campaign: the pandemic and Trump's fitness for office.

"President Trump’s super-spreader events are spreading more than just the coronavirus," he said at a drive in rally in Florida on Friday (AEDT).

"They’re spreading division and discord. We need a president who will bring us together – not pull us apart."

For all the fervour that both Republicans and Democrats feel about the election, Sabato says he is hoping for a decisive result either way.

"If it's very close we're going to be in bad shape," he says. "There's going to be violence. I don't think anyone believes Donald Trump will be a good loser – it's not in his make up."

And if Trump scores another clear victory? "We'll have to dismantle the data machine," he says. "Not just polling but for everything else we have learnt to rely on. What we replace it with I don't know."

Our weekly newsletter delivers expert analysis of the race to the White House from our US correspondent Matthew Knott. Sign up for The Sydney Morning Herald‘s newsletter here, The Age‘s here, Brisbane Times‘ here and WAtoday‘s here.