Gallery sets out to buy famed 1776 painting for £50million 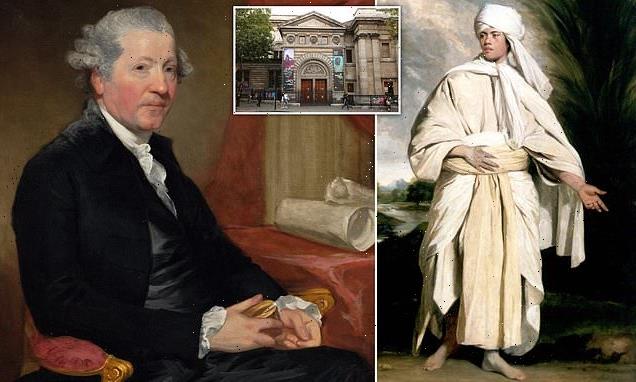 A British museum has set out to buy a famed 1776 painting of a Polynesian man who sailed to England with Captain Cook, met King George III and became the country’s ‘first non-white celebrity’.

The National Portrait Gallery (NPG) is looking to buy Sir Joshua Reynolds’ Portrait of Omai for £50 million in order to keep it in Britain, after revelations that its owner, John Magnier, intends to move the work to Ireland.

The romantic painting has been heralded as the British artist’s ‘greatest portrait’ and depicts Tahitian man Mai, also known as Omai, who was one of the first Pacific Islanders to visit Europe. 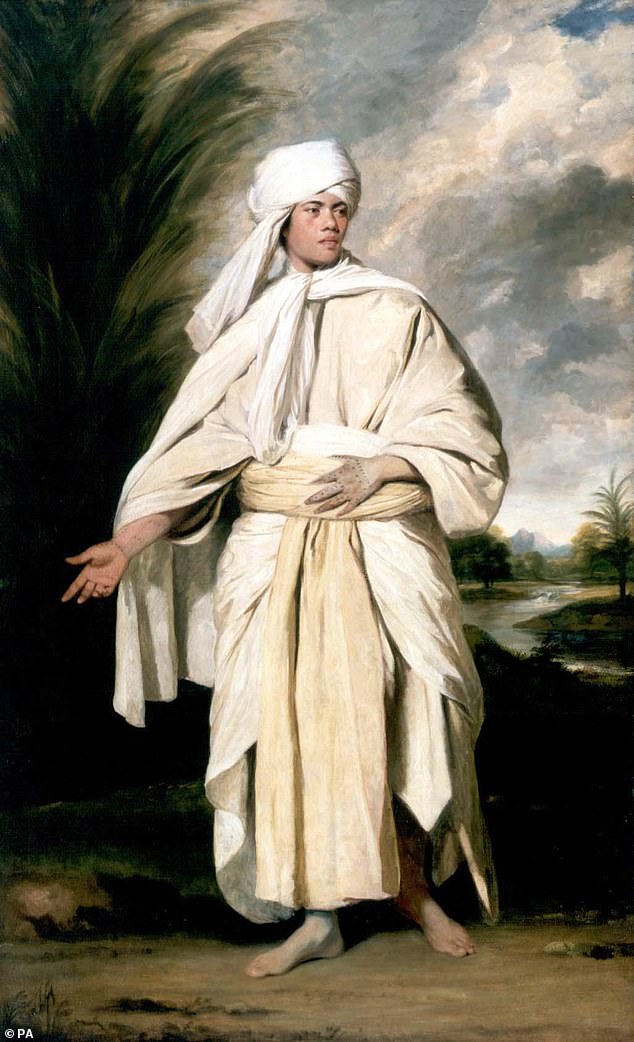 In 1774, he sailed to Britain with Captain Cook after meeting him on his first voyage in 1769. While in the UK, Omai met King George III and writer Samuel Johnson, mingling with Royal Society.

Three years later, Omai joined Cook on this third voyage, returning to Polynesia. He is believed to have died there two years later, before turning 30.

If the £50 million purchase is successful, it will make it the joint most expensive piece ever purchased by a museum in the UK alongside The Titan, which was bought in 2009 by London’s National Gallery and the National Gallery of Scotland.

A spokesperson for the National Portrait Gallery told MailOnline: ‘Sir Joshua Reynolds’ portrait of Omai is one of the greatest British portraits and a painting of singular national, and international, cultural significance. 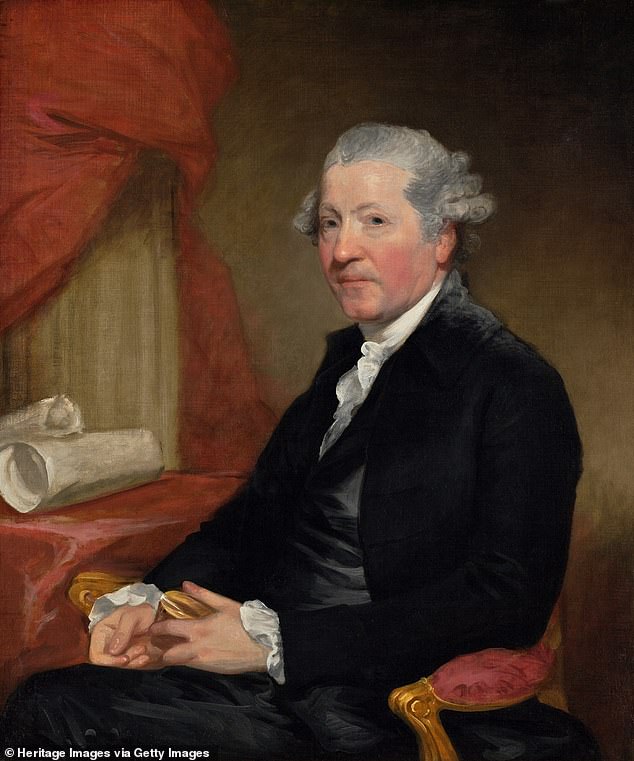 Who was the Polynesian Omai who sailed to Britain with Captain Cook?

Mai, also known as Omai, was the first Polynesian to visit Britain, and travelled to the country with Captain Cook in 1774.

He described himself as an ‘attendant upon the king’ and was the son of a landowner. He briefly became an apprentice to a priest in Tahiti after his father was killed by warriors.

He met Cook in 1769 in Tahiti on his first voyage of discovery. Here he also met scientist and socialite Joseph Banks, who was also on Cook’s first voyage.

Banks was interested to study how Omai, considered a ‘native’, would respond to European society, and hosted him at his house.

Omai was entered into society, meeting scientists, celebrities and royalty.

He was seen as a sophisticated and charming man with his own complex culture.

His etiquette and good humour won him favour, and helped dismantle misconceptions about people outside of Europe.

He left Britain in 1776, returning to Tahiti.

That voyage became the subject of a  production, Omai – A Voyage ’round the World, at Theatre Royal in London’s Covent Garden in 1785.

On his return to Tahiti, he lived with in a European-style house and had two boys as his servants.

‘The National Portrait Gallery is supportive of the crucial efforts being made to give UK institutions the opportunity to acquire this uniquely important painting for the nation to ensure it goes on public display once and for all, where it belongs.’

The painting, which was bought by the Earl of Carlisle in 1796, was sold at Sotheby’s in 2001 to Swiss company, Settlements SA for £10.3 million.

It is controlled by billionaire collector and stud owner Magnier.

In March the country’s arts minister deferred an export licence for the portrait so that a UK gallery or institution could acquire the painting.

This has been extended until March 2023, with The Art Newspaper reporting that the NPG is looking to purchase it for £50 million.

A spokesperson for the National Portrait Gallery added: ‘The second deferral period will give us the chance to explore a number of fundraising leads and gives potential supporters the opportunity to come forward to help stop this key work of British culture from leaving.’

The £50 million could be raised through a variety of sources including the National Heritage Memorial Fund, The Art Fund, private donors and the Government.

The Art Newspaper reported that ‘a one-off special government grant’ could be considered for the work as ‘there is a feeling that this is one purchase which they might agree to back’.

The National Heritage Memorial Fund provides £5 million in grants each year, which may contribute.

And The Art Fund, which spent £3.3 million on museum acquisitions last year, could also help towards the costs.

Its spokesperson told the newspaper that there have been discussions about how the fund could ‘potentially support and campaign to save this incredibly important work’.

The NPG, which has been closed since 2020, is finalising its £35.5 million refurbishment, after reaching its fundraising target for the improvements. It is due to open next year.

In 2001, The Tate tried to purchase the work for £5.5 million, before it was sold to Settlements SA.

The next year, Magnier applied for an export licence to take the painting to Ireland. The Tate offered £12.5 million, the then valuation, via an anonymous donor, for the portrait after the licence was deferred.

But the sale was refused and the export licence withheld.

In 2005, it was lent to the Tate Britain for a Reynolds exhibition, before being lent to Dublin’s National Gallery of Ireland for six years.

The famed portrait returned to the UK in 2011, and then went into storage, before being briefly shown at Amsterdam’s Rijksmuseum in 2018. 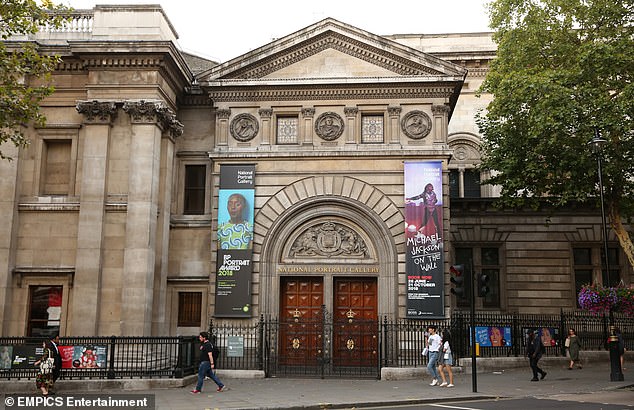 A spokesperson for the National Portrait Gallery told MailOnline: ‘Sir Joshua Reynolds’ portrait of Omai is one of the greatest British portraits and a painting of singular national, and international, cultural significance.’

Magnier made another application in 2016 to temporarily export the work to Ireland for 15 months, before applying in March for a permanent export licence — with a new valuation of the work at £50 million.

In June, an open letter from museums, professors and writers was published in the Financial Times calling for the portrait to remain in the UK.

It said: ‘The painting captures a historic moment of encounter between the British and the non-European worlds.

‘Portrait of Omai is an artwork of the utmost international significance. It is perhaps the greatest work of Britain’s greatest portraitist and the first ever grand portrait of a non-white subject.

‘The story of Mai is now of more interest than ever as we seek to examine our past and understand who we are as a nation.

‘For all these reasons, Omai should stay in Britain. It is privately owned, and £50 million is needed to keep it here. While state institutions cannot afford this sum, a work so precious can be saved through efforts to fundraise.’