Ever since Nadia Baluch moved to Greenvale in Melbourne’s north six years ago, she has walked past a large blue billboard promising a new shopping centre.

As the housing estate she bought into developed from farmland into suburbia, the giant ad sitting on a large empty block lined by houses became a bit of a running joke. 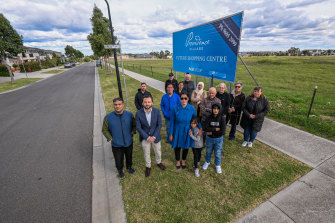 Residents in front of a billboard promising the new shopping centre.Credit:Joe Armao

New residents who put down deposits thinking the shopping centre was coming soon, inevitably started to post on the neighbourhood Facebook page asking when it would be finished, only to be told no one knows.

“If you’re advertising something and making a promise, then please do keep it,” the local GP said.

It’s a story often told about the housing estates going up on Melbourne’s outskirts: the house and land packages are sold based on proposed amenities that take a long time to eventuate.

Instead of a shopping centre with a Woolworths or Coles, residents are now preparing for an influx of more homes into an area that is already straining under rapid population growth. 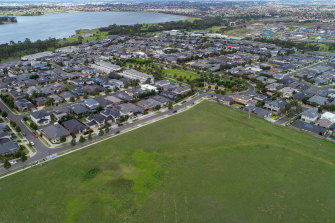 Fifty-six townhouses will be built on empty land at Montenegro Road, Greenvale. Residents have been waiting years for a shopping centre on the site.Credit:Joe Armao

Developers recently lodged a planning application with Hume City Council to construct 56 townhouses on the empty site where the promised town centre was supposed to go.

“You had a plan, you advertised it and you attracted people to shops at walking distance.

“Now what we are finding is that there are more dwellings coming up, instead of the shopping centre. It is false advertising.”

There is an existing set of shops a couple of kilometres further south in Greenvale. But residents in the estates say that getting there without a car is not safe.

The only walking route is down busy Mickleham Road, which doesn’t have footpaths. The local bus service runs once or twice an hour.

Choked roads have been an issue in the area for some time, particularly during the early morning and late afternoon.

Earlier this week, the state government promised $104 million in its budget to duplicate a 1.6-kilometre stretch of Mickleham Road in Greenvale.

“I have seen people risking their lives, they walk next to the traffic,” said Fatima.

“They basically bought here thinking it would be convenient to walk to the shops. They’re in their 60s and 70s.”

The need to build a shopping centre in the area was identified more than a decade ago, before the first bulldozers had moved in to subdivide the paddocks.

A development plan for a neighbourhood activity centre was approved by the council in 2009 and received ministerial approval for rezoning in June 2011.

Hume councillor and estate resident Naim Kurt said the main stumbling block in building the shopping centre was a set of traffic lights that the developers wanted to construct on Mickleham Road.

He said the lights would have impeded traffic flow and the plan didn’t meet Department of Transport guidelines.

“It was advertised a shopping centre would be built soon and it’s been 12 years,” Kurt said.

“There is a bit of alarm that the shopping centre might not be built at all. I think the developers have made a lot of money, they can take a haircut on this.”

A spokesperson for developer Pask said the company was still committed to the delivery of the Providence Village retail site.

“Pask remain in discussions with Hume Council to progress an outcome which is consistent with proposed urban design framework for the site,” they said.

In a statement, Hume City Council pointed out that the property subject to the latest application is zoned for both residential and commercial purposes.

The townhouses will sit adjacent to Montenegro Road, with a large section to the east, next to Mickleham Road, still set aside for the shopping centre.

“This application is on the residential component,” said director of planning and development Michael Sharp. “No decision has been made on the application.”

Even if the shopping centre is still a possibility in the future, residents are frustrated that it has not taken priority over more housing.

After years of looking at a billboard on an empty block, they want something more definitive than “coming soon”.

“It was one of the things that attracted us, over some of the other estates going up,” said Providence resident Maria Ferriggi.

“I think they’ve clearly misled buyers. I would suspect I’ll be well and truly gone [from the area] before it happens.”