A former prisoner was one of several ex-offenders to bravely confront London Bridge attacker Usman Khan on Friday – despite the killer claiming to be armed with a bomb.

But as others fled from danger, Mr Conway headed straight for it, bravely joining a group of people chasing and confronting Khan.

Conway is a former prisoner and was one of several ex-offenders, including Khan, who attended the London conference, a University of Cambridge-run project that included ex-inmates, University professors and educational professionals.

Khan attacked the conference, killing Jack Merritt, 25, who was the course co-ordinator. 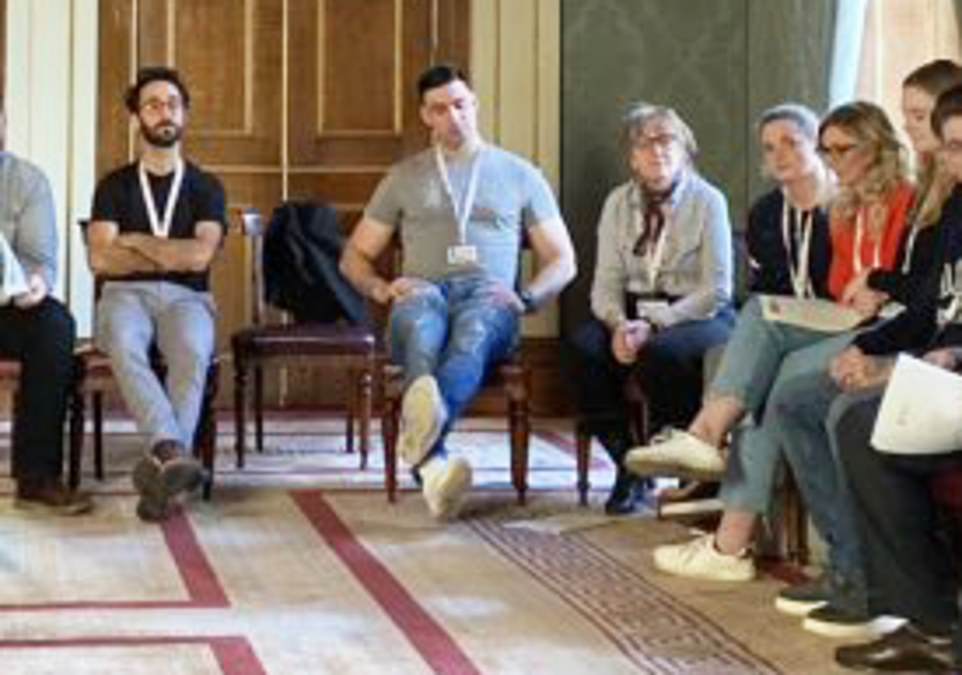 Marc Conway, wearing a grey shirt and blue jeans, was one of a group of people who bravely confronted London Bridge attacker Usman Khan 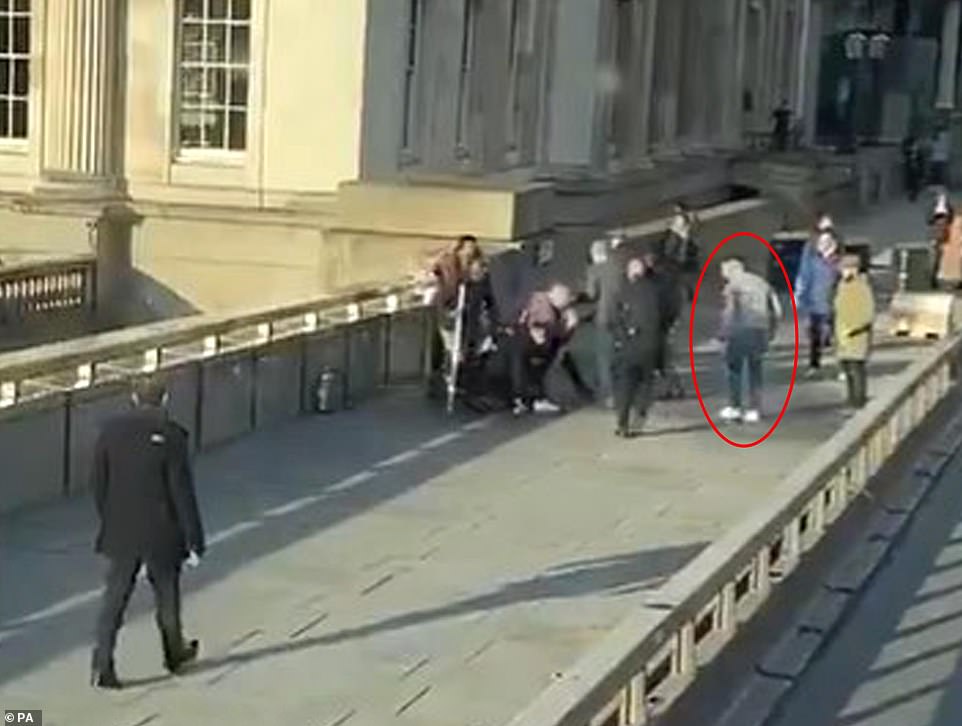 Mr Conway, circled, bravely ran after Khan, despite the killer shouting that he had a bomb. Mr Conway was part of a group that disarmed Khan 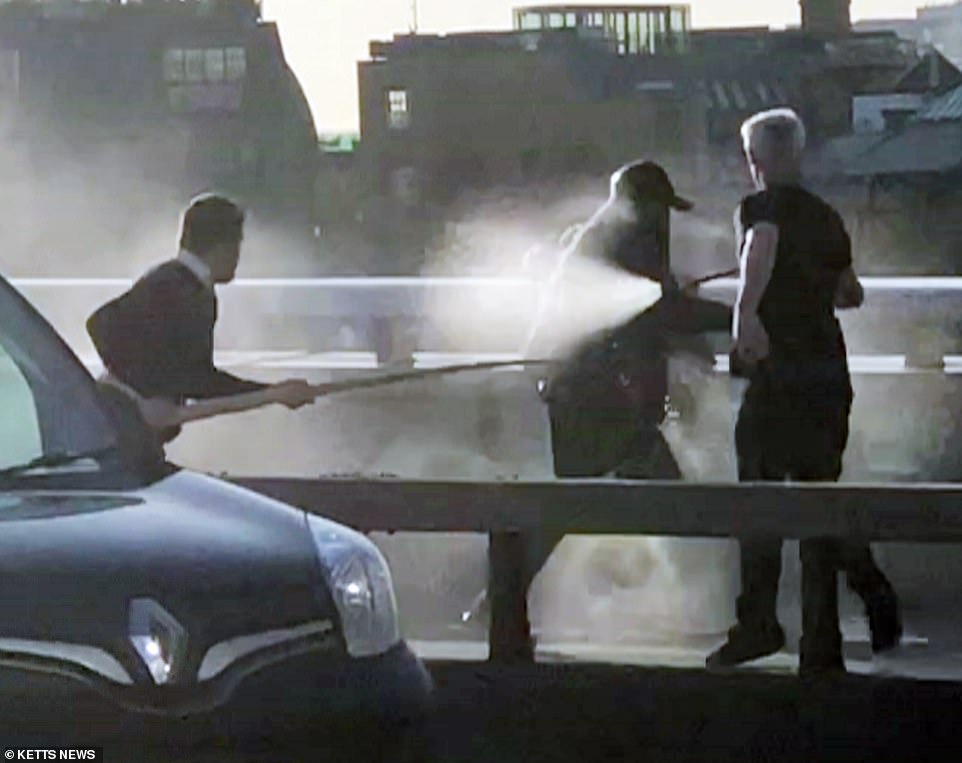 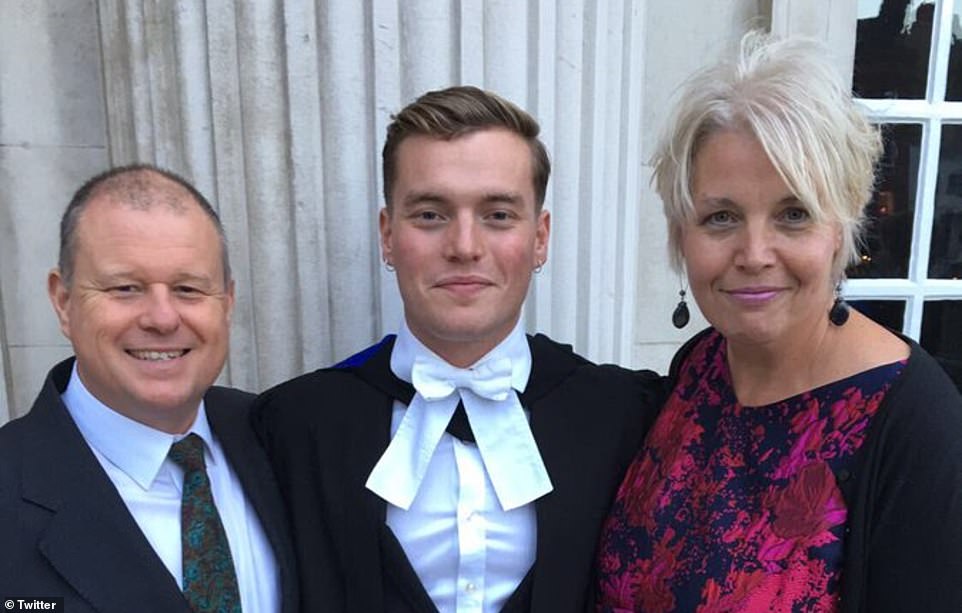 Jack Merritt is pictured above with his father David, and mother, right. Mr Merritt was the course co-ordinator for Learning Together, an education scheme run by the University of Cambridge’s Institute of Criminology that killer Khan had attended on Friday

A witness said a small group of ‘immensely brave’ men, including Mr Conway, never hesitated as they confronted Khan, forcing him out of the building.

Mr Conway now works as a policy officer at the Prison Reform Trust and, according to his LinkedIn page, is studying for a degree in Criminology at the Open University and another in psychology at Cambridge.

Wearing a grey T-shirt and blue jeans, he is in a group photo from the event and is also later seen among a group of people surrounding Khan as police arrived.

A statement from the Prison Reform Trust, an independent prison charity, noted that staff from several criminal justice organisations had been present at the conference, according to the Times. 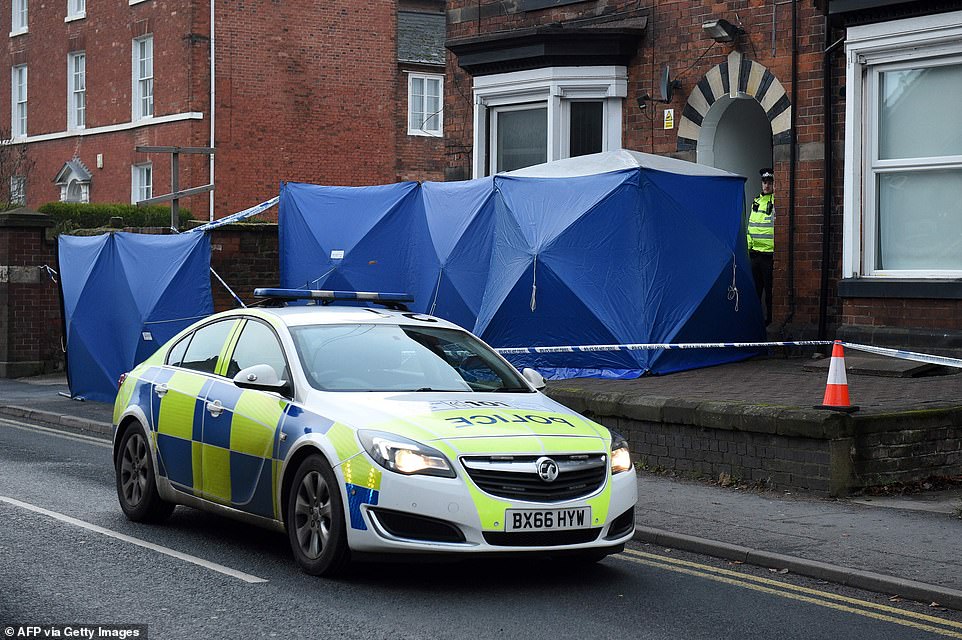 Police officers stand by forensic tents outside a residential address in Stafford, believed to be a bail hostel where Usman Khan stayed 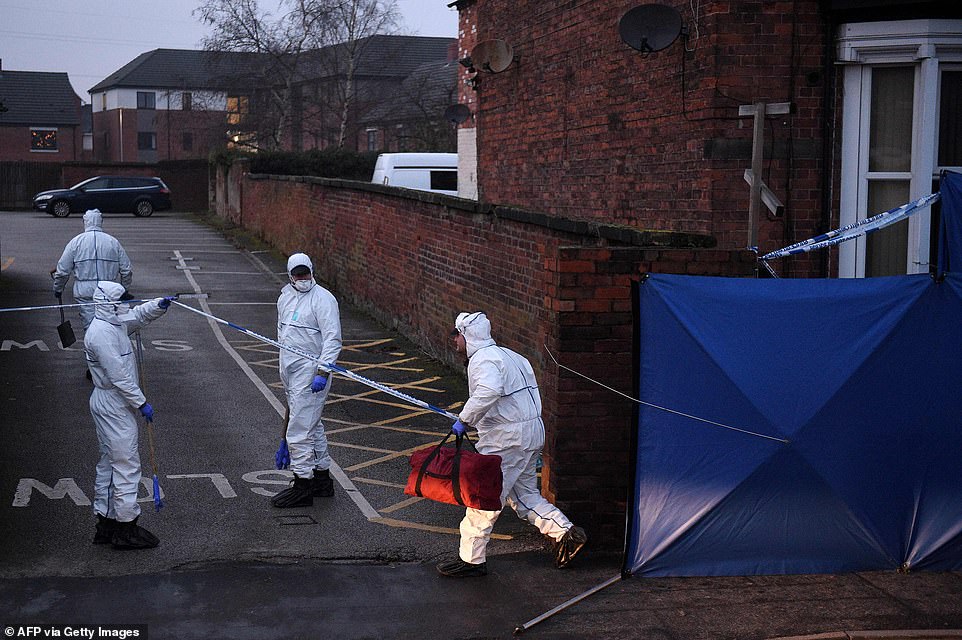 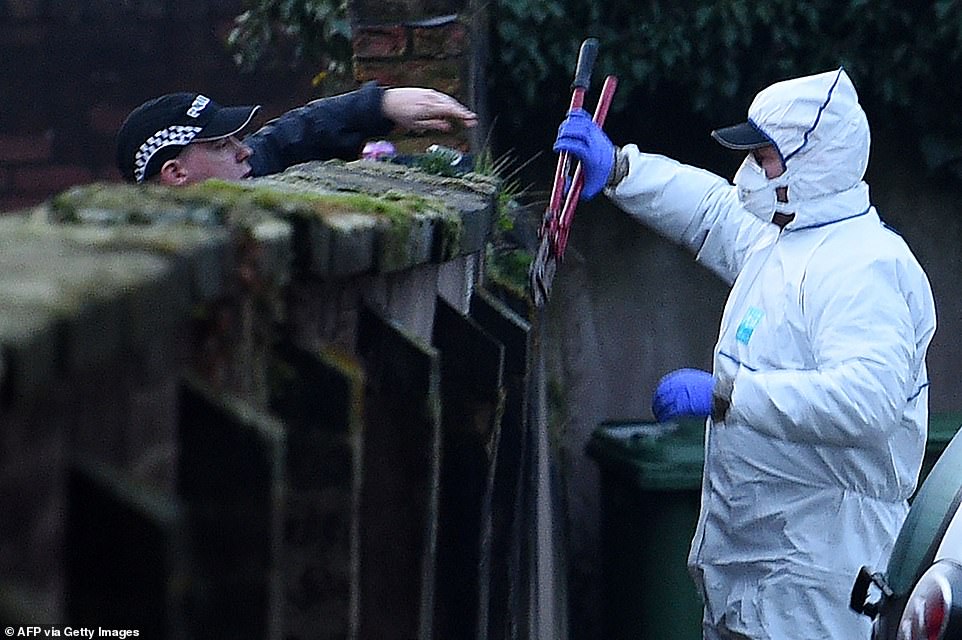 Another hero from the tragedy was a chef called Lukasz who grabbed a narwhal tusk from Fishmongers’ Hall to fight off Khan.

He is currently recovering in hospital after the London Bridge terror attack.

Lukasz, originally from Poland, tried to pin down Khan, who wore a fake suicide vest, using a five-foot narwhal tusk he took from the wall of Fishmongers’ Hall.

A friend of of Lukasz’s told The Mirror: ‘The staff have been asked not to say too much, but I’ve his number and he’s still in hospital. 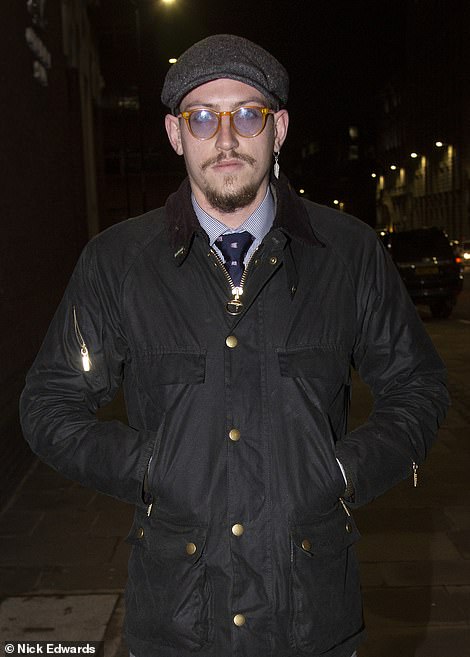 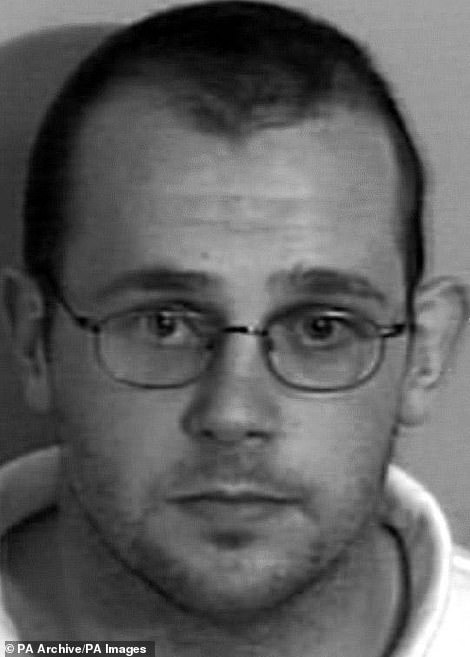 Thomas Gray (left) has described the moment he confronted the London Bridge attacker and stamped on his hand, forcing him to release one of two kitchen knives. Another of the heroes of yesterday’s attack is a convicted murderer out on day release, James Ford (right), it emerged

Mr Merritt and a woman were killed in the attack, and three others were injured.

Video exclusively obtained by the Daily Mail shows Lukasz using the narwhal tusk as he and a group of men try to pin down the attacker. 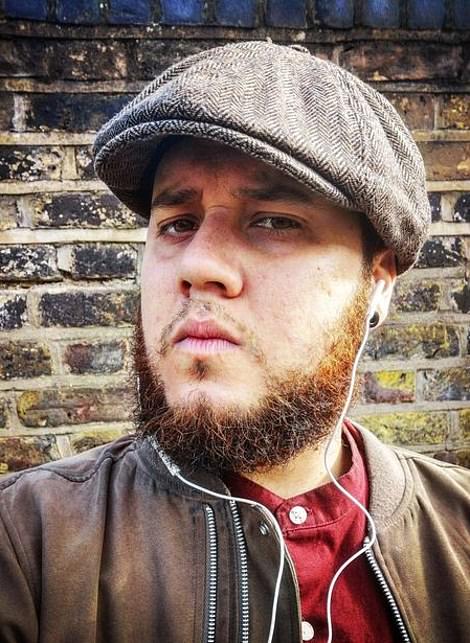 His colleague at Small Car Big City, Stevie Hurst, told BBC Radio 5 that he ran towards the terrorist and kicked him in the head

The Queen today praised the ‘brave individuals who put their own lives at risk to selflessly help and protect others’ during yesterday’s attack.

Hero Lukasz’s colleague, who asked to remain anonymous, told The Times: ‘Lukasz grabbed a nearby pole and ran at him, getting stabbed in the hand in the process but continued to pin him down.

‘Being stabbed didn’t stop him giving him a beating. Lukasz is a hero.’

Lukasz is thought to have suffered from cuts but is not critically injured.

This comes after fearless tour guide Thomas Gray, 24, was revealed as one of the heroes who helped to disarm the attacker.

Mr Gray described the moment he confronted the London Bridge attacker and stamped on his hand, forcing him to release one of two kitchen knives.

He and a colleague, who had been driving tourists around the capital in classic Mini Coopers, had been travelling over London Bridge to pick up some more customers at a hotel when they saw the knifeman being pinned to the floor.

Mr Gray and his colleague then bravely got out of their vehicles to help, as three other men attempted to keep the attacker on the ground.

He said: ‘There were three big blokes grappling with another man and had him on the floor. I asked what was going on and someone said the man on the ground had just stabbed two women.

‘I saw that he had two kitchen knives with blades about 8-inches long. One in each hand. One of the knives appeared to be attached to his hand by duct tape.

‘I stamped as hard as I could on his other wrist to make him let go of the knife and as he released it someone else kicked it away.

‘He was saying ‘get off me’ but we told him ‘no f***ing way is that happening’. The police were on the scene very quickly. The knifeman appeared to reach for something in bag and the police warned us to move away saying he had a gun. 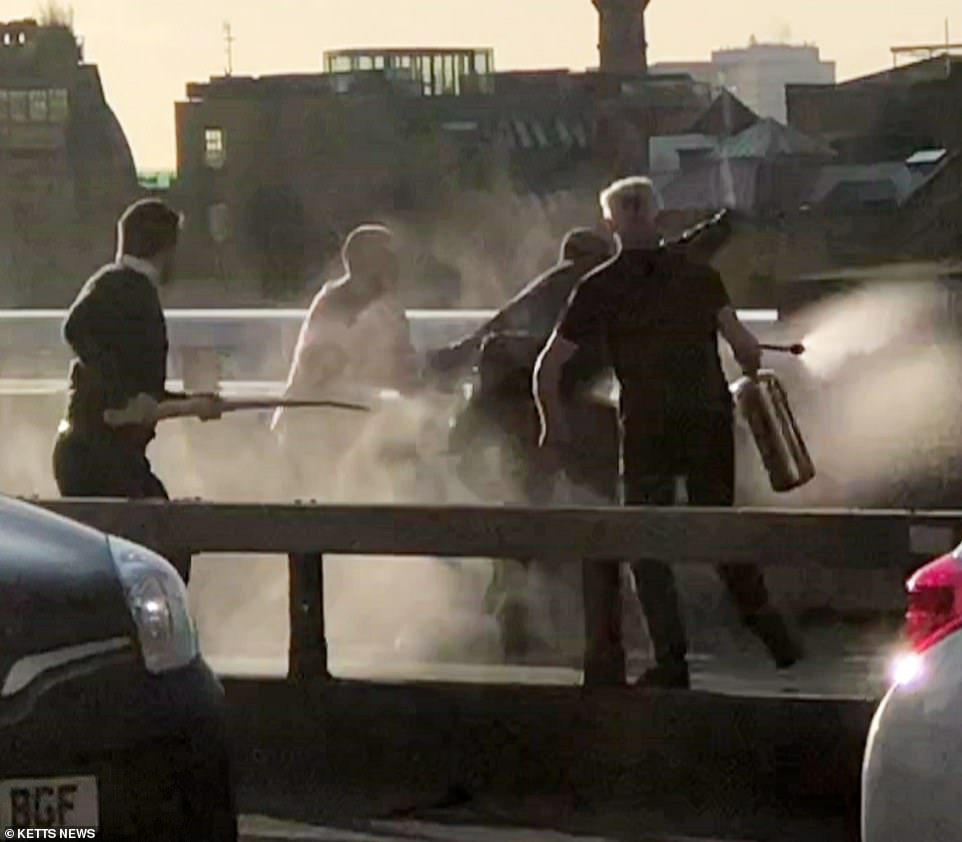 Hero Lukasz’s colleague, who asked to remain anonymous, told The Times : ‘Lukasz grabbed a nearby pole and ran at him, getting stabbed in the hand in the process but continued to pin him down’ 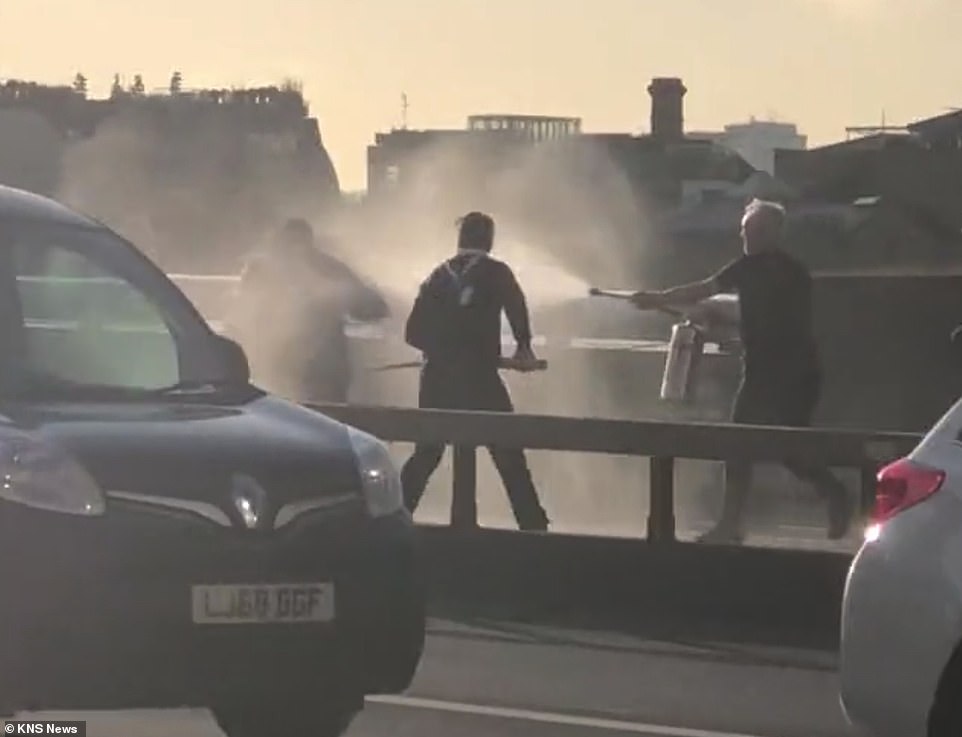 Lukasz’s colleague added: ‘Being stabbed didn’t stop him giving him a beating. Lukasz is a hero.’ Lukasz is thought to have suffered from cuts but is not critically injured 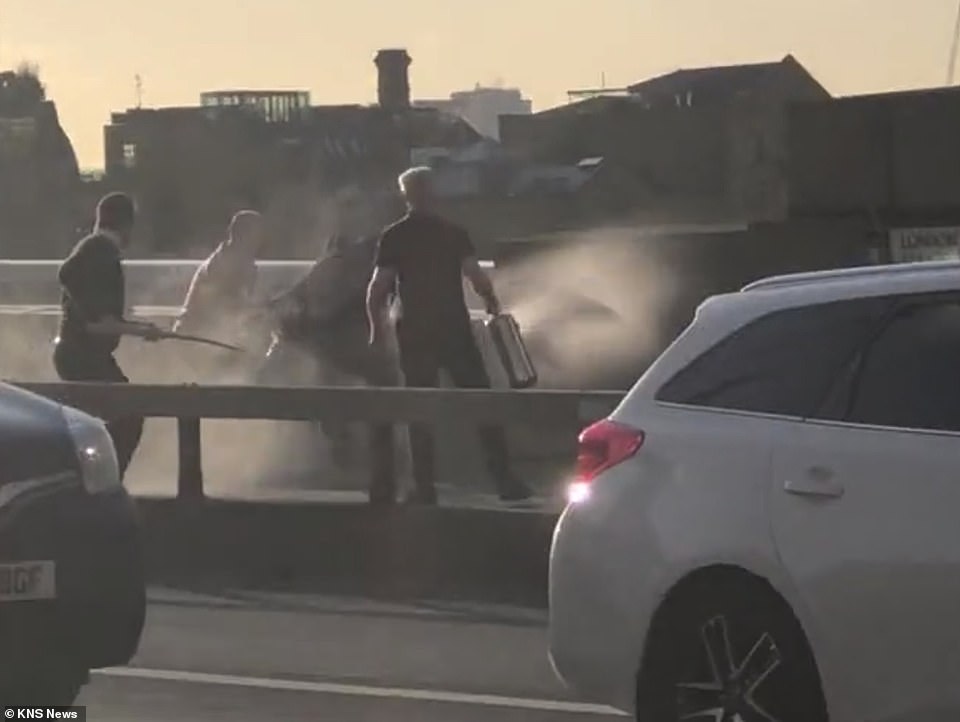 The Queen today praised the ‘brave individuals who put their own lives at risk to selflessly help and protect others’ during yesterday’s attack. Pictured: Lukasz pointing the tusk at the attacker

‘Whether or not he did or whether the police were just trying to get us to move away, I don’t know. I saw the police shoot him three or four times and then heard a dull thud.’

His colleague at Small Car Big City, Stevie Hurst, told BBC Radio 5 that he ran towards the terrorist and kicked him in the head.

‘I felt compelled to jump out of the car and go and see what the situation was’, he said.

‘So everyone was on top of him trying to bundle him to the ground.

‘We saw that the knife was still in his hand, he was covered in blood. I just put a foot in to try and kick him in the head, we were trying to do as much as we could to try and dislodge the knife from his hand so he wouldn’t harm anyone else’.

Another brave passerby, later confirmed to be a plain-clothed British Transport Police officer, had been walking on the other side of the bridge, and risked his own safety by running through traffic and jumping over a central partition to tackle the knifeman.

The man was later seen holding one of two kitchen knives Khan had brandished moments before the assailant was shot dead by armed police.

‘The courageous actions he took when faced with the horrors of this attack are remarkable.

‘He, as well as other members of the public, should be extremely proud of what they did to stop this man on London Bridge.’

Fishmongers’ Hall was hosting a prisoner rehabilitation conference organised by the Institute of Criminology at Cambridge University.

The Queen has sent ‘thoughts, prayers and deepest sympathies to all those who have lost loved ones’ in the London Bridge attack 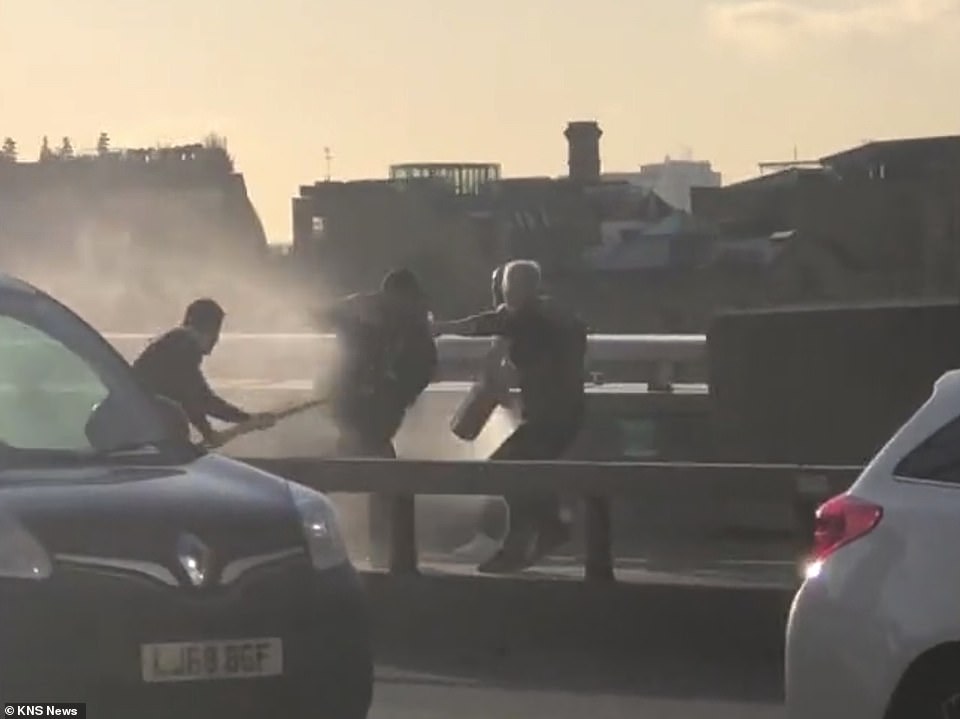 Fishmongers’ Hall was hosting a prisoner rehabilitation conference organised by the Institute of Criminology at Cambridge University. Khan is believed to have been invited to the event to share his experiences as a former prisoner. Lukasz (left) with the tusk used to pin Khan down 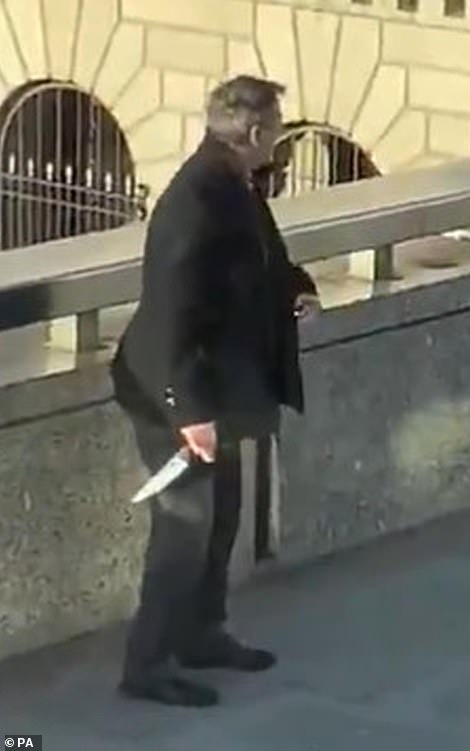 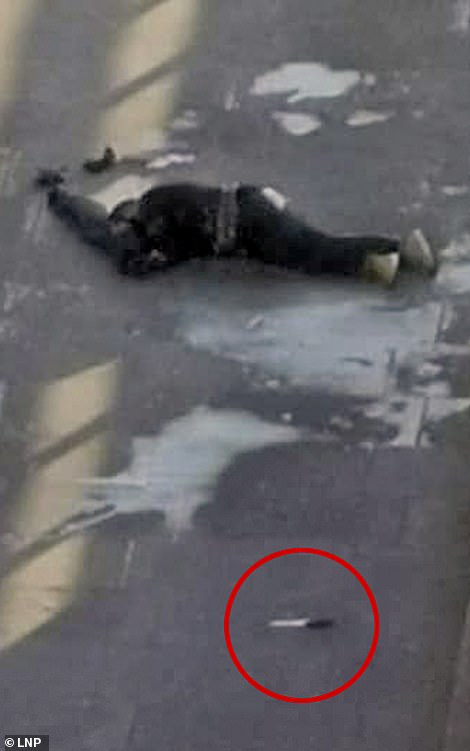 One of the bystanders on London Bridge was seen holding a knife (left) which appeared to have been taken from the suspect. Another man – believed to be the knifeman – could be seen lying on the ground, close to a knife (circled, right)

Khan is believed to have been invited to the event to talk about his experiences as a former prisoner.

Police were called to the north side of London Bridge at 1.58pm on Friday, after reports of a stabbing near Bank station and Fishmongers’ Hall.

The attack is thought to have begun inside the venue, police said, before the suspect left the building and headed towards London Bridge.

Here, the knifeman was confronted by several members of the public, who disarmed him before armed police took control and he was shot dead.

Another bystander can be seen brandishing a fire extinguisher in video footage of the aftermath of the attack.

Another hero of the attack is convicted murderer James Ford who was out on day release.

It is believed Ford rushed to the scene and tried to save the life of a woman victim of the terrorist. 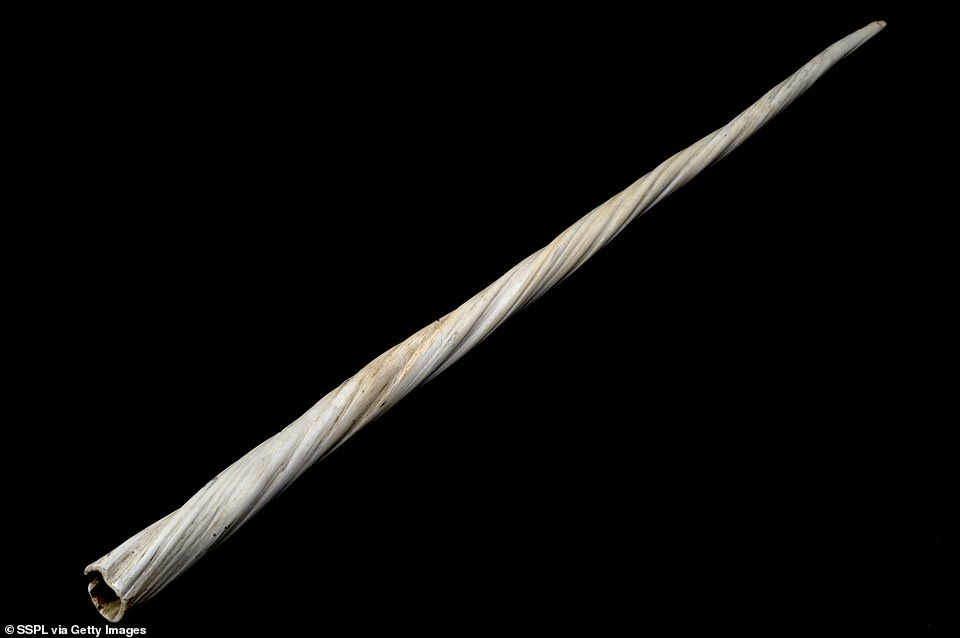 Lukasz had reportedly grabbed the tusk from the wall of Fishmongers’ Hall, which was hosting an event (stock image) 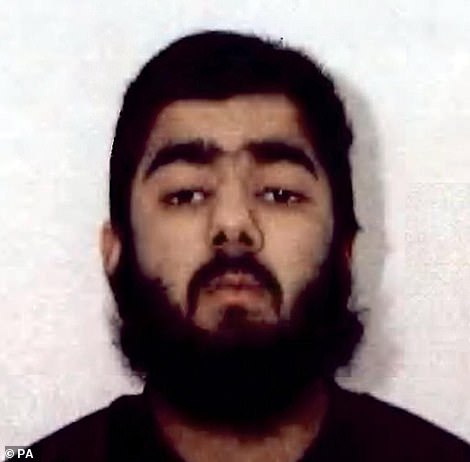 Metropolitan Police Commissioner Cressida Dick confirmed two people, a man and a woman, had died as a result of the attack.

Early on Saturday morning, Mr Basu confirmed the suspect to be Mr Khan and said officers had been carrying out searches at an address in Staffordshire.

Police also confirmed the suspect was already known to authorities, and was convicted in 2012 for terrorism offences before being released from prison on licence in December 2018.

A statement said: ‘We are now in a position to confirm the identity of the suspect as 28-year-old Usman Khan, who had been residing in the Staffordshire area. As a result, officers are, tonight, carrying out searches at an address in Staffordshire. 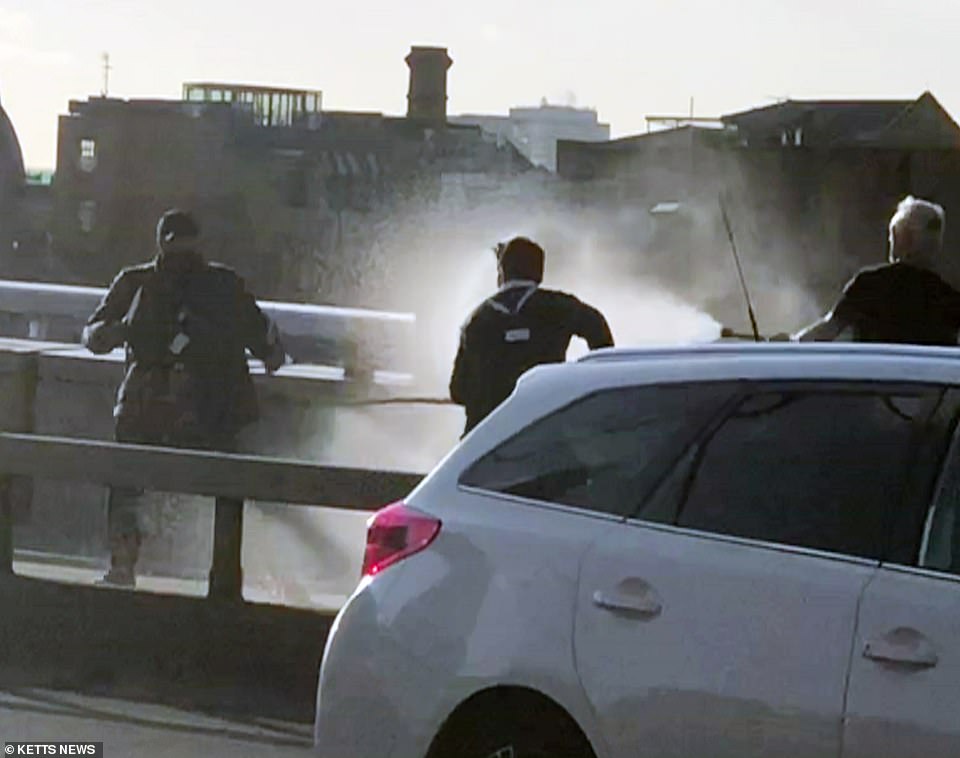 Lukasz’s collegue, who asked to remain anonymous, told The Times : ‘Lukasz grabbed a nearby pole and ran at him, getting stabbed in the hand in the process but continued to pin him down’ 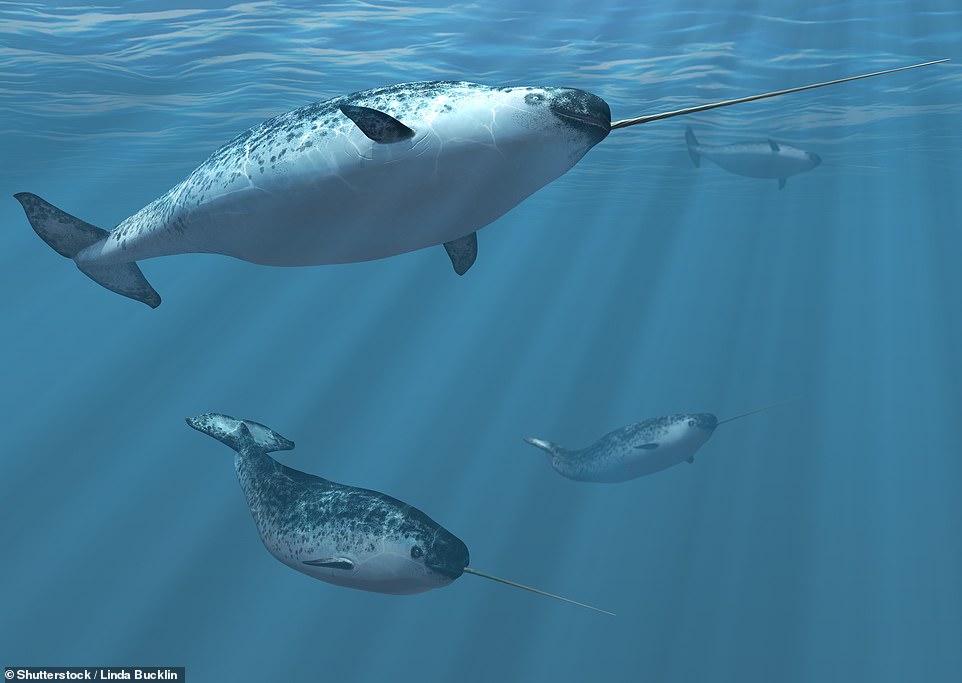 ‘This individual was known to authorities, having been convicted in 2012 for terrorism offences. He was released from prison in December 2018 on licence and clearly, a key line of enquiry now is to establish how he came to carry out this attack.

‘Tragically, two people – a man and a woman – were killed during the attack. Three others – a man and two women – were also injured and remain in hospital.

‘The circumstances, as we currently understand them, are that the attacker attended an event earlier on Friday afternoon at Fishmonger’s Hall called ‘Learning Together’. We believe that the attack began inside before he left the building and proceeded onto London Bridge, where he was detained and subsequently confronted and shot by armed officers.

‘Extensive cordons are likely to remain in place for some time and I would ask the public to continue to avoid the area.’