Berlin: European countries have triggered a dispute mechanism in their nuclear deal with Iran, a move that could lead to the return of United Nations sanctions on Tehran.

Britain, France and Germany said that they had been "left with no choice" but to make the move given Iran's announcement on January 5 that it would no longer be bound by limitations on its nuclear energy program following Washington's targeted killing of Major General Qasem Soleimani, commander of Iran's Quds Force. 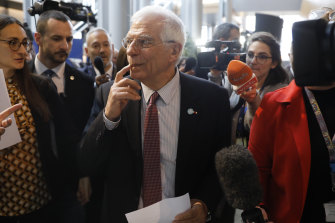 Tehran had been gradually reducing its commitments under the deal since the United States withdrew and reimposed sanctions in 2018. With Washington threatening secondary sanctions against European businesses dealing with Iran, Tehran argued it could no longer reap the financial benefits laid out in the pact in exchange for curbing its nuclear program.

In a joint statement on Tuesday, local time, Britain, France and Germany reiterated their regret at the Trump administration decision to withdraw from the deal, formally known as the Joint Comprehensive Plan of Action. They said that they had "sought to persuade Iran to change course" and "worked hard" to address its concerns.

However, given Iran's latest move, the European countries said that they had "been left with no choice, given Iran's actions, but to register today our concerns that Iran is not meeting its commitments".

Triggering the dispute mechanism could pave the way for the return of United Nations sanctions on Iran, but the statement said the European countries still remained committed to preserving the deal and would not be joining Washington's campaign of "maximum pressure" against Tehran.

President Trump has repeatedly called on European allies to withdraw from the Obama-era deal, which he railed against during his 2016 campaign. However, the deal's three European signatories and Russia and China have stood by it, arguing it is the best way to put limits on Tehran's nuclear program.

British Prime Minister Boris Johnson on Tuesday said that the White House's main issue with the nuclear deal was that it was "flawed" but also that it was signed by President Obama.

Russia has remained vocally committed to the deal and has urged Europe to do more to save it. Konstantin Kosachev, head of the foreign affairs committee in the upper house of the Russian parliament, said that Europe should also call on the United States to abide by its commitments under the deal.

"Given Western logic, it turns out that no matter what happens with the JCPOA," he wrote on Facebook. "Iran should observe it and if it fails to honour it, it shall be the only party to blame. This is dubious logic, to put it mildly. The US is apparently using and enjoying this impunity in its little unipolar world it has created."