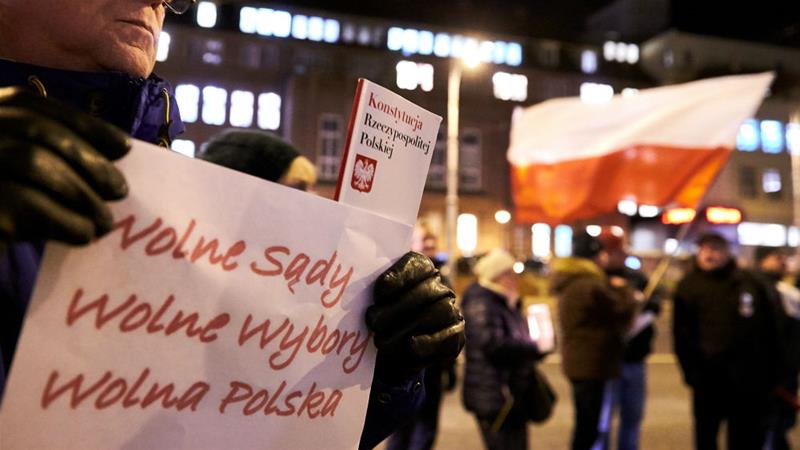 On Tuesday, the European Court of Justice (ECJ), the supreme court of the European Union, once again handed down a judgement expressing concerns over Poland’s judicial “reforms” imposed by the ruling Law and Justice party.

The Polish Supreme Court had asked the ECJ to rule whether sufficient guarantees for judicial independence could be provided by Warsaw’s National Council of the Judiciary, a body responsible for appointing judges and reviewing ethical complaints against judges, which was completely reformulated in 2018, and a new Disciplinary Chamber of the Supreme Court.

According to Tuesday’s judgement, it is up to the Supreme Court of Poland to investigate the independence of the Disciplinary Chamber. Its judges were chosen by the National Council of the Judiciary, which, according to Polish judges, does not ensure independence from the legislative and executive branches of government.

“It is a very happy day for Poland and rule of law advocates because we finally clearly see that neither the new National Council of Judges nor the Disciplinary Chamber are being tolerated in the European legal space,” Patryk Wachowiec, a legal analyst at the Civil Development Forum, told Al Jazeera.

“At the same time, it is a very sad day because when it comes to the rule of law in the EU, Poland lags behind. No other country, even Hungary, has such a record as Poland.”

Tuesday’s ruling stated: “The referring court must ascertain whether the new Disciplinary Chamber of the Polish Supreme Court is independent, in order to determine whether that chamber has jurisdiction to rule on cases where judges of the Supreme Court have been retired, or in order to determine whether such cases must be examined by another court which meets the requirement that courts must be independent.”

Anna Wojcik is a researcher at the Polish Academy of Sciences and the editor of ruleoflaw.pl, an English-language resource on the rule of law in Poland.

“The Grand Chamber’s judgement may directly impact on the status of hundreds of judges in Poland that have been appointed or promoted on the NCJ’s recommendation,” she told Al Jazeera.

“This would be a yet another serious blow to the validity of Law and Justice’s judiciary reforms, especially given that the NCJ is the apple in the eye of the governing majority.”

Since coming to power in 2015, the right-wing Law and Justice party, which recently secured its second consecutive term, has been seeking to reform the Polish judicial system. They say the system was corrupt and served only the interests of the elite, including the former ruling party, the Civic Platform.

Over the past four years, judges loyal to Law and Justice have been appointed to the Constitutional Tribunal and other judicial bodies, such as the National Council of the Judiciary. The Ministry of Justice also replaced court presidents and vice-presidents, and those judges whose rulings ran contrary to the party line have faced disciplinary proceedings.

The Law and Justice party also introduced changes into the organisation of the Supreme Court, trying to remove uncooperative judges by lowering the retirement age of judges, including that of the first president.

The ECJ ruled earlier this month that was in breach of the principle of effective judicial protection and a threat to judicial independence.

Critics say Warsaw’s goal is to create a system in which the ruling party controls the judiciary and the end of the courts’ independence in Poland.

Tuesday’s ruling is only the first response of the EU’s judicial bodies to the questions posed by Poland’s Supreme Court. The rest are expected to be answered soon.

“Ruling in all those cases, [the ECJ] is entering into previously uncharted territory, and establishing an EU minimal standard of protecting judicial independence. This is a positive development from the point of judges, citizens, but also for democratic governments,” said Wojcik.

“[The ECJ] presents governments with a ‘checklist’ to verify whether diverse elements of their justice systems safeguard judicial independence.”

Global markets slide on back of coronavirus concerns in China