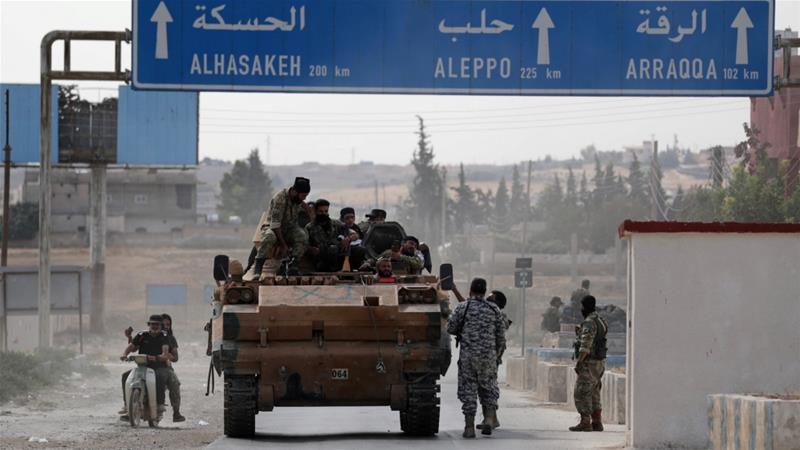 Eight people were killed when a bomb exploded on Sunday in an area of northeast Syria controlled by Turkish troops and their Syrian rebel allies.

Turkey’s defence ministry said the bombing, which it blamed on Kurdish fighters, took place southeast of the Syrian town of Tal Abyad, which Turkey captured in a military offensive last month.

“Eight civilians lost their lives and more than 20 were wounded in an attack by a booby-trapped vehicle,” it said in a statement.

The village of Suluk, where Sunday’s explosion took place, is about 10km (4.5 miles) south of the border. A small truck exploded outside a bakery there, an emergency worker told Reuters news agency.

Turkey halted its military advance inside Syria when it struck deals with the United States and Russia for the Kurdish People’s Protection Units (YPG), considered a “terrorist group” by Ankara, to be moved at least 30km (20 miles) away from the border with Turkey.

The offensive faced international criticism over fears it could undermine efforts to prevent Islamic State of Iraq and the Levant (ISIL or ISIS) re-emerging in Syria and unleash another humanitarian crisis in the eight-year conflict.

YPG was the lead force in the Syrian Democratic Forces (SDF), Washington’s main ally in the battle against ISIL in Syria. US President Donald Trump has faced domestic criticism for announcing a troop withdrawal that was seen as a green light for Turkey’s cross-border campaign against the armed group.

Turkish President Recep Tayyip Erdogan has said both Moscow and Washington failed to meet their commitments under last month’s agreements for the YPG to withdraw from the border, and warned the offensive could resume.

He spoke to Russian President Vladimir Putin by phone on Saturday, and meets Trump in Washington on Wednesday.

YPG is viewed by Turkey as an offshoot of the armed Kurdistan Workers’ Party (PKK), considered a “terrorist” organisation whose struggle for autonomy has killed tens of thousands of Turks over the past 35 years.

The recent Turkish operation was aimed at seizing a strip of land roughly 30km deep along the 440-km border between the two countries.

Ankara says it wants to establish a “safe zone” there to resettle up to two million of the 3.6 million Syrian refugees it hosts on its soil because of the war.