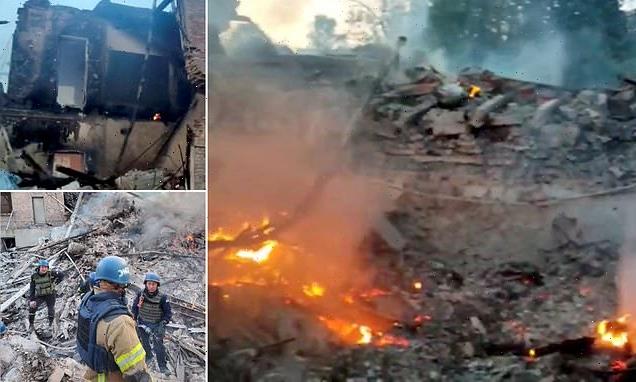 Dozens feared dead after bomb hits school in Luhansk: Two people are killed with another 60 still missing ‘after Russian forces shelled building where 90 people were sheltering

Two people have been killed and 60 more are feared dead following a Russian airstrike on a school in the Ukrainian village of Bilohorivka yesterday, according to the governor of the Luhansk region.

Around 90 people were using the Belogorovskaya school basement as a bomb shelter when the site suffered a direct hit on Saturday evening, regional governor Serhiy Haidai confirmed via the Telegram messaging app this morning.

Footage and images of the school show the extent of the destruction, with large sections of the building reduced to rubble and a team of firefighters drafted in to combat the resulting blaze.

Rescuers managed to pull thirty people out of the ruins last night, Haidai said, but up to sixty more remain trapped in the basement and are thought to have been killed.

‘The fire was extinguished after nearly four hours, then the rubble was cleared, and unfortunately the bodies of two people were found,’ Haidai wrote.

‘Sixty people are likely to have died under the rubble of buildings.’

Rescuers continued to work from the early hours, attempting to clear the remaining rubble and free any remaining survivors.

Separately, Haidai said that according to preliminary information, shelling in the village of Shypilovo destroyed a house and 11 people remained under the building’s debris.

There was no immediate response from Russian authorities.

The latest devastation in Luhansk comes just one week after the Lysychansk Multidisciplinary Gymnasium, a prestigious Ukrainian school built in the 19th century, was completely destroyed in another attack.

Footage from the incident shows the shell of the historic structure crumbling as flames raged throughout its corridors and hallways.

‘After the victory of Ukraine, we will make every effort to restore the gymnasium,’ Haidai said last week, while former graduate Yana Goncharenko told Ukrainskaya Pravda: ‘It was created more than 100 years ago by the Belgians. It was among the top 100 schools in the country. It survived two world wars and the battle for the city in 2014, but animals without morals burned it down in 2022.’ 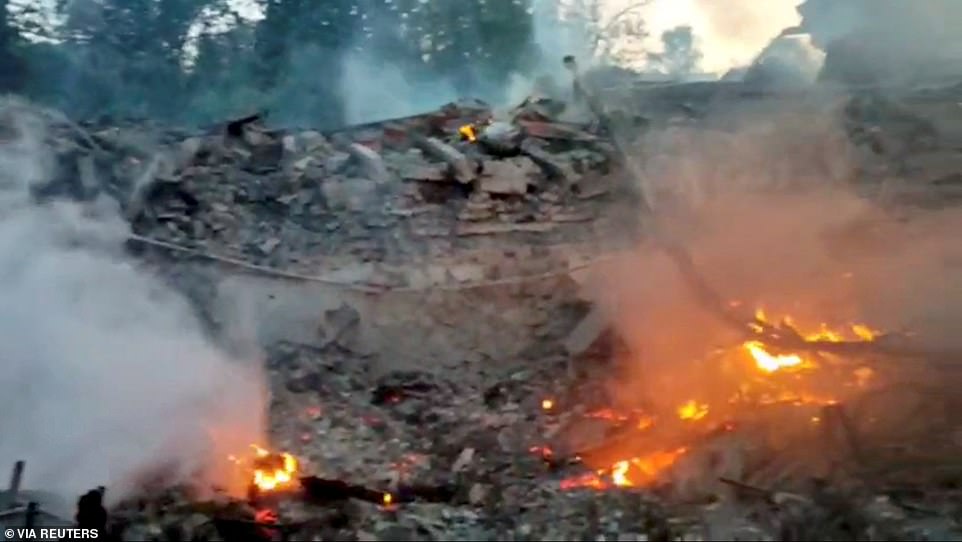 Burning debris is seen, after a school building was hit as a result of shelling, in the village of Bilohorivka, Luhansk, Ukraine, May 7, 2022 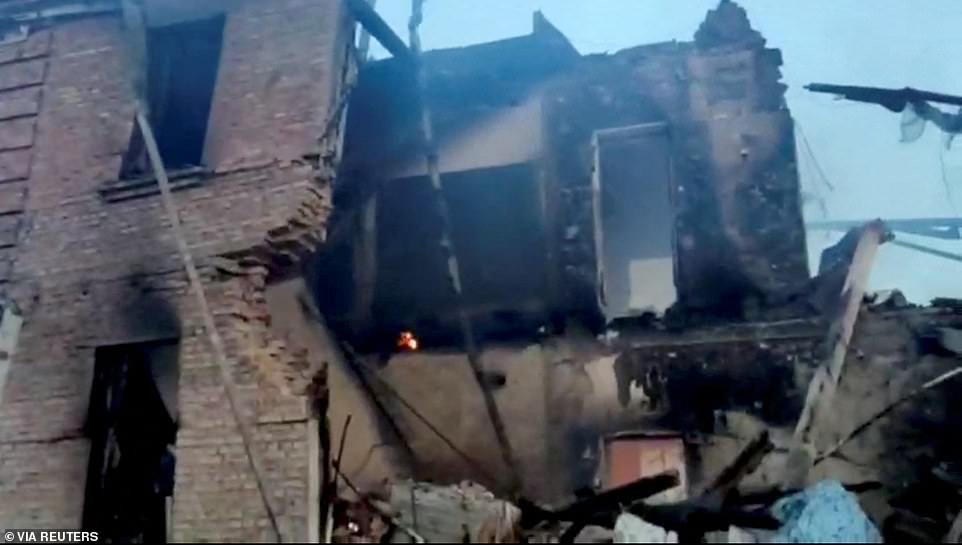 Emergency crew stands amid the burning debris of Belogorovskaya school in the Luhansk region. Sixty people are believed to be trapped under the rubble and are feared dead 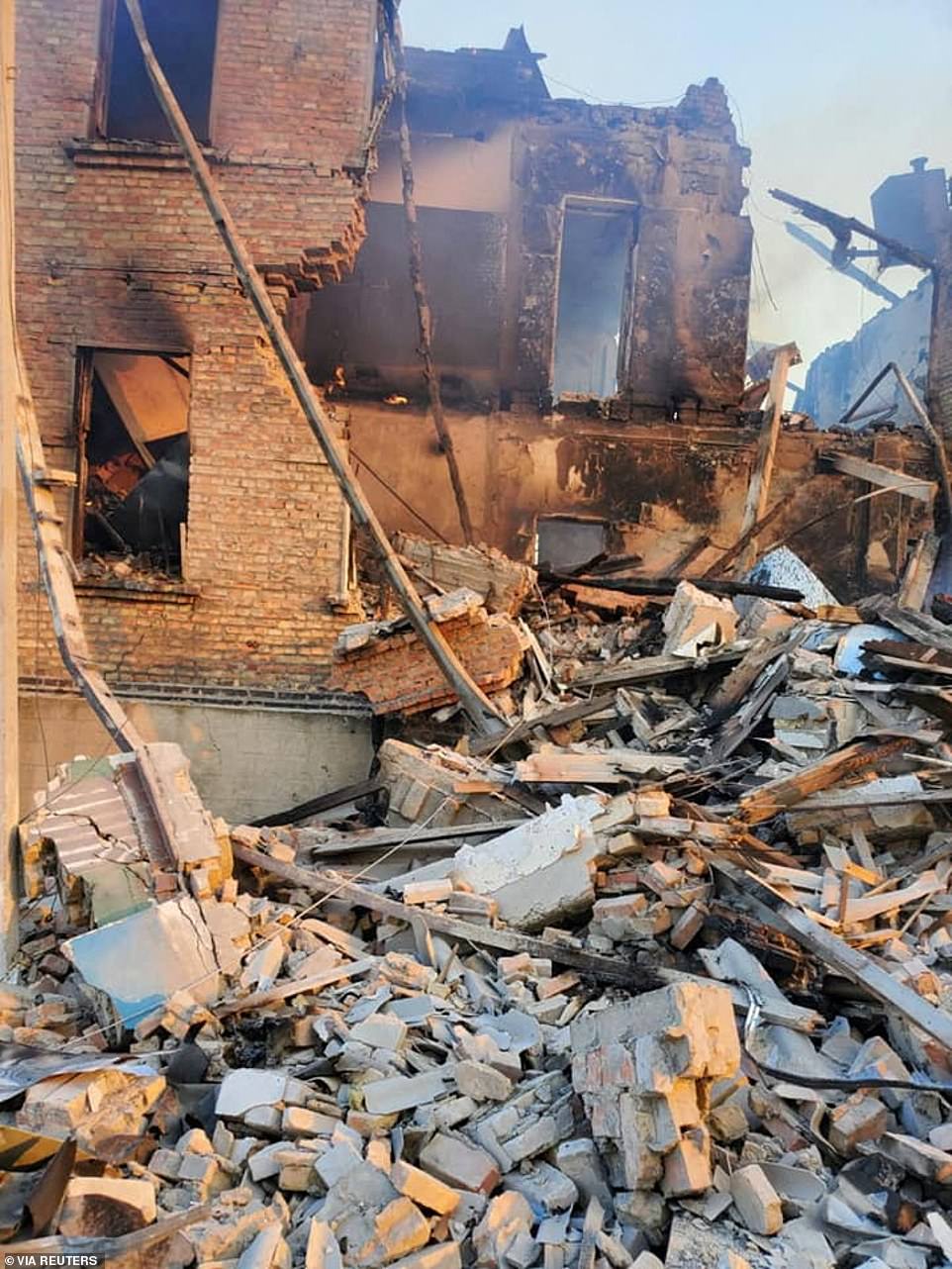 Rescuers managed to pull thirty people out of the ruins last night, Haidai said, but up to sixty more remain trapped in the basement and are believed to be dead. ‘The fire was extinguished after nearly four hours, then the rubble was cleared, and unfortunately the bodies of two people were found,’ Haidai wrote 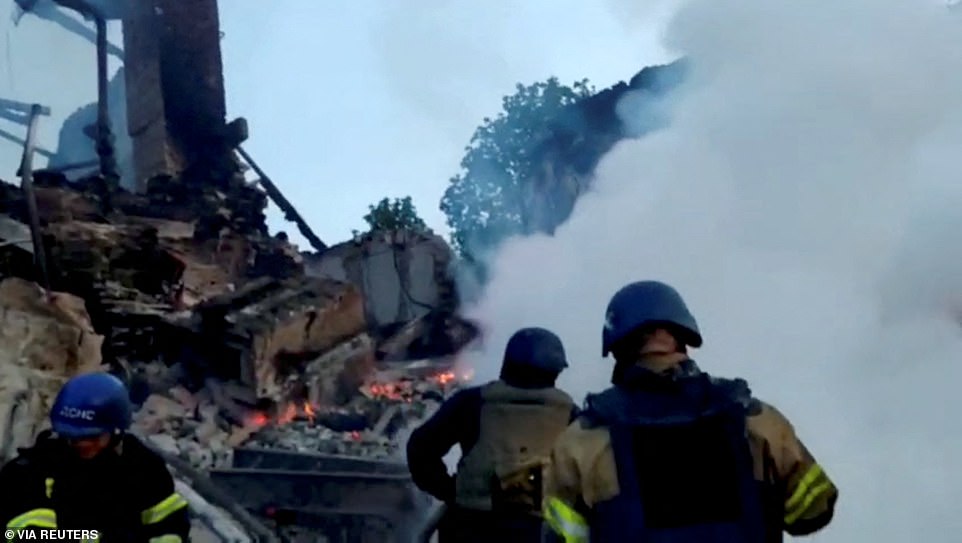 Emergency crew tend to a fire near a burning debris, after a school building was hit as a result of shelling, in the village of Bilohorivka, Luhansk, Ukraine, in the early hours of May 8, 2022

The brutal airstrikes on civilian shelters and residential areas came as the World Health Organisation (WHO) said it would help investigations into Russian war crimes by documenting instances of targeted attacks on Ukrainian healthcare facilities.

WHO Emergencies Director Mike Ryan told a news conference yesterday that organisation has already documented 200 separate attacks on hospitals and clinics in Ukraine since the conflict began on February 24.

He confirmed the WHO would pass on the evidence to investigators, as WHO director general Tedros Ghebreyesus expressed his support for Ukraine from Kyiv on Saturday.

‘My message to all the people of Ukraine is this,’ he said, speaking from the government media center in the capital. ‘WHO stands by you.’

Moscow was aiming to complete its conquest of Mariupol in time for Victory Day celebrations on Monday, but Putin’s forces continue to face dogged resistance from defenders within the bunkers beneath the factory.

All civilians have now been evacuated from the besieged steel plant but hundreds of Ukrainian soldiers are still holding out against the Russian onslaught.

Ukraine’s military said retreating Russian forces destroyed three bridges on a road northeast of the city to try to slow the Ukrainian advance.

The largest European conflict since World War II has developed into a punishing war of attrition that has killed thousands of people, forced millions to flee their homes and destroyed large swaths of some cities.

Ukrainian leaders warned that attacks would only worsen in the lead-up to Victory Day, when Russia celebrates Nazi Germany´s defeat in 1945 with military parades. Russian President Vladimir Putin is believed to want to proclaim some kind of triumph in Ukraine when he addresses the troops on Red Square on Monday. 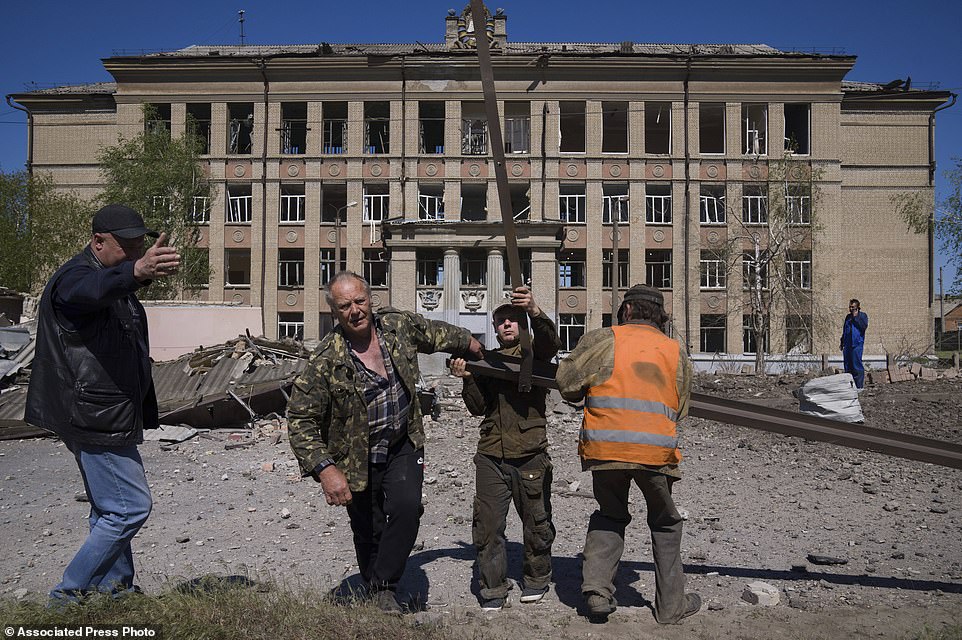 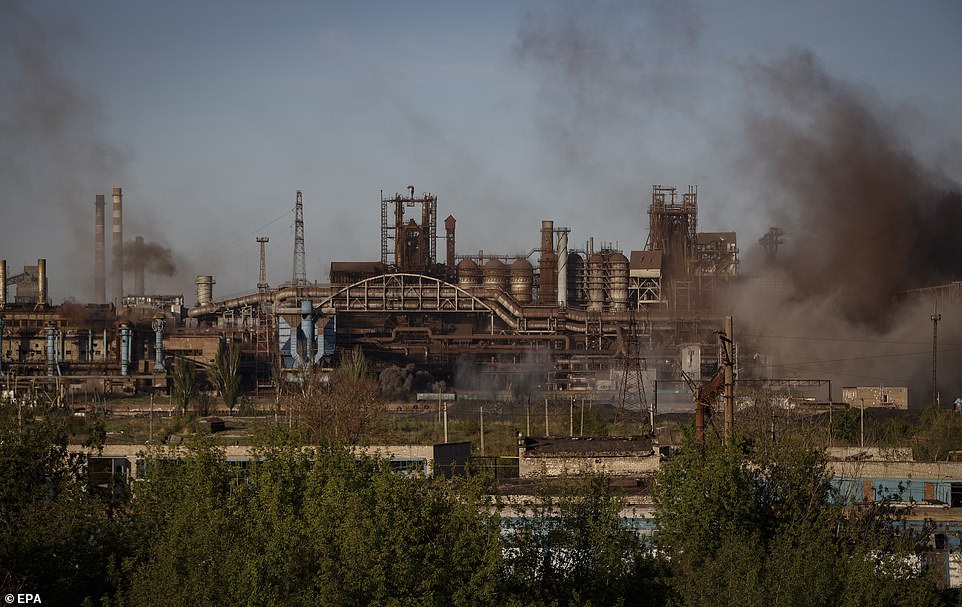 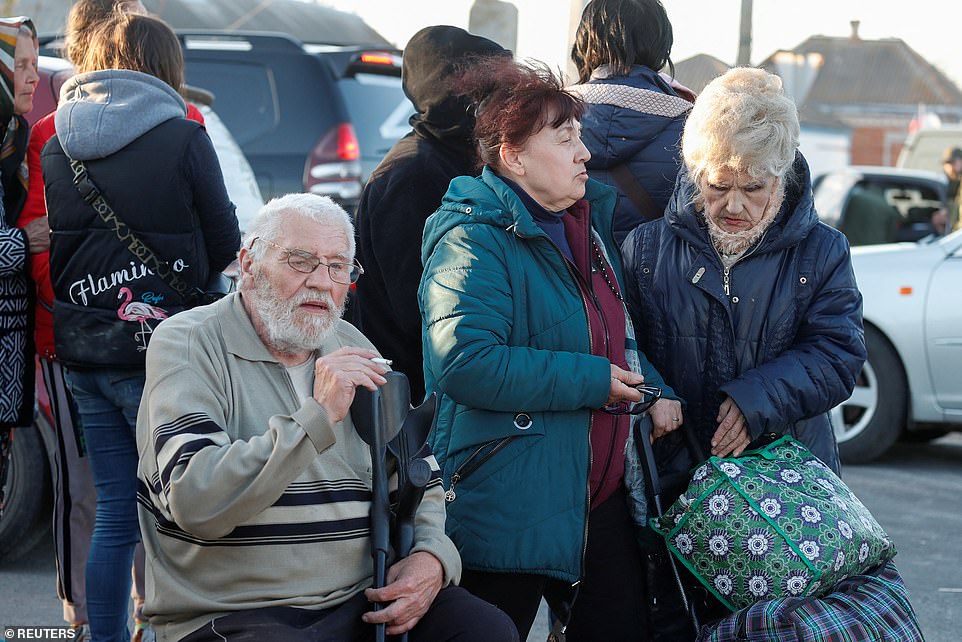 Civilians gather near buses carrying people, who were evacuated from Mariupol in the course of Ukraine-Russia conflict, in the village of Bezimenne in the Donetsk region, Ukraine May 7, 2022

US Secretary of State Antony Blinken said Saturday that Ukrainian President Volodymyr Zelensky and his people ’embody the spirit of those who prevailed during the Second World War.’

He accused Putin of trying ‘to twist history to attempt to justify his unprovoked and brutal war against Ukraine.’

‘As war again rages in Europe, we must increase our resolve to resist those who now seek to manipulate historical memory in order to advance their own ambitions,’ Blinken said in a statement as the United States and United Kingdom commemorate the Allied victory in Europe.

The most intense fighting in recent days has been in eastern Ukraine, where the two sides are entrenched in a fierce battle to capture or reclaim territory. Moscow’s offensive there has focused on the Donbas, where Russia-backed separatists have been fighting since 2014.

In neighboring Moldova, Russian and separatists troops are on ‘full alert,’ the Ukrainian military warned Sunday. The region has increasingly become a focus of worries that the conflict could expand beyond Ukraine’s borders.

Pro-Russian forces broke off the Transnistria section of Moldova in 1992, and Russian troops have been stationed there since, ostensibly as peacekeepers.

Those forces are on ‘full combat readiness,’ Ukraine said, without giving details on how it came to the assessment.

Moscow has sought to sweep across southern Ukraine both to cut off the country from the sea and create a corridor to Transnistria. But it has struggled to achieve those objectives.

The Odesa city council said four of the missiles hit a furniture company, with the shock waves and debris badly damaging high-rise apartment buildings. The other two missiles hit the Odesa airport, where the runway had already been taken out in a previous Russian attack.

Meanwhile in Mariupol, Ukrainian fighters made a final stand against a complete Russian takeover of the strategically important city, which would give Moscow a land bridge to the Crimean Peninsula, annexed from Ukraine during a 2014 invasion.

Satellite photos shot Friday by Planet Labs PBC showed vast devastation at the sprawling Azovstal seaside steel mill, the last pocket of Ukrainian resistance in the city. Buildings had gaping holes in the roofs, including one under which hundreds of fighters were likely hiding. 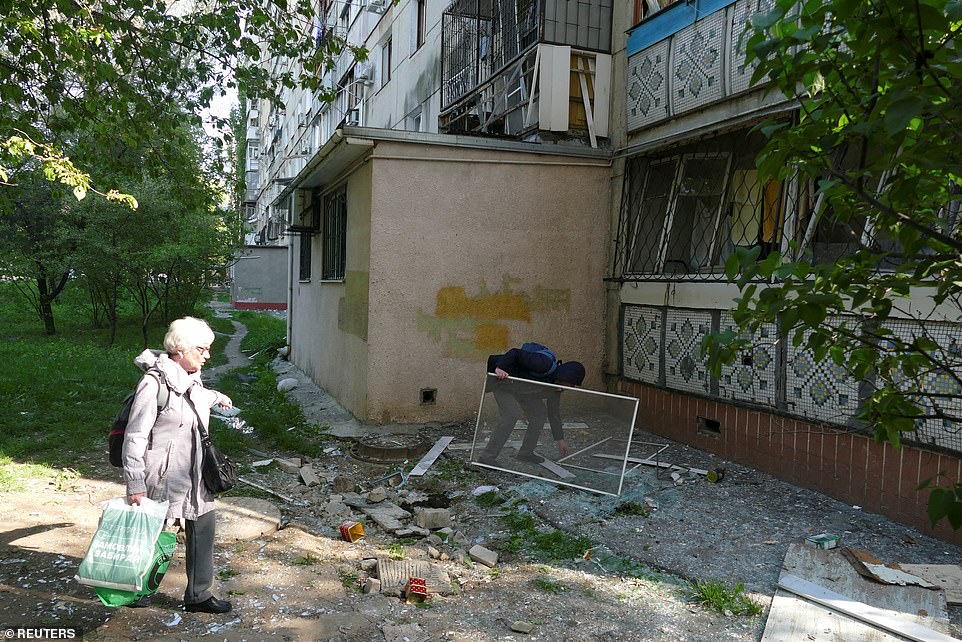 A woman walks past a building damaged by a missile strike, amid Russia’s invasion of Ukraine, in Odesa, Ukraine, May 7, 2022 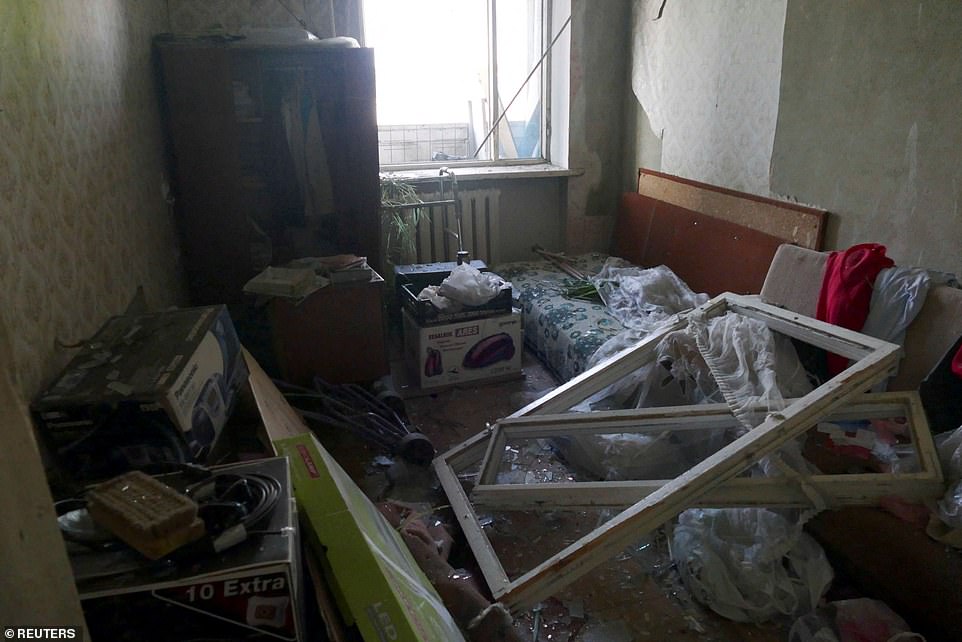 View shows damage inside a building after a missile strike, amid Russia’s invasion of Ukraine, in Odesa, Ukraine, May 7, 2022 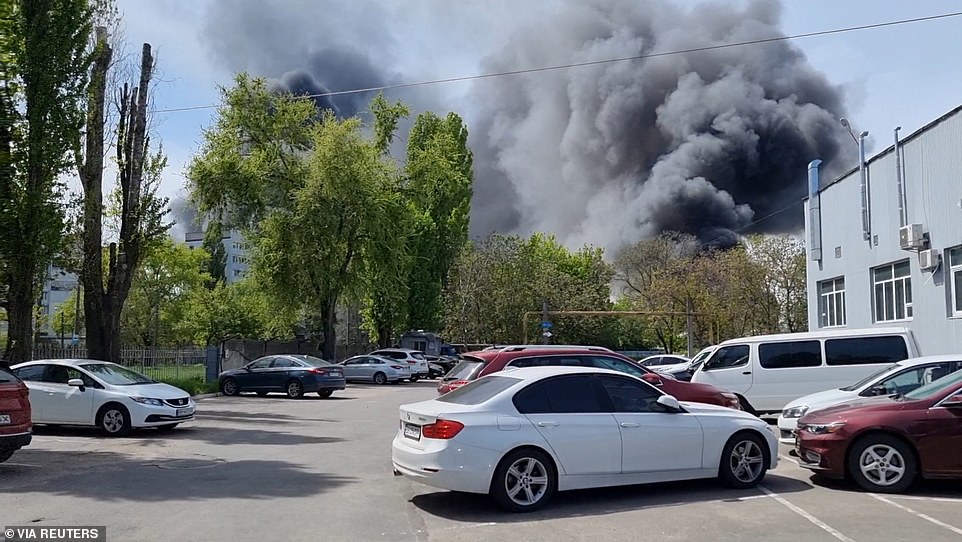 A plume of black smoke billows after explosions, amid Russia’s invasion of Ukraine, in Odesa, Ukraine May 7, 2022

After rescuers evacuated the last civilians Saturday, Zelensky said in his nightly address that the focus would turn to extracting the wounded and medics: ‘Of course, if everyone fulfills the agreements. Of course, if there are no lies.’

He added that work would also continue Sunday on securing humanitarian corridors for residents of Mariupol and surrounding towns to leave.

The situation at the plant has drawn the world´s attention, with the United Nations and the International Committee of the Red Cross desperately trying to organize evacuations.

But Russian forces have intensified fire on the mill with mortars, artillery, truck-mounted rocket systems, aerial bombardment and shelling from the sea, making evacuation operations difficult.

Three Ukrainian fighters were reportedly killed and six more wounded during an evacuation attempt Friday. Capt. Sviatoslav Palamar, the deputy commander of the Azov Regiment, said his troops had waved white flags, and he accused Russian forces of firing an anti-tank weapon at a vehicle.

It remains unclear what will happen to the estimated 2,000 fighters at Azovstal, both those still in combat and the hundreds believed to be wounded. In recent days the Ukrainian government has been reaching out to international organizations to try to secure safe passage for them. The fighters have repeatedly vowed not to surrender.

Zelensky said officials were trying to find a way to evacuate them. He acknowledged the difficulty, but said: ‘We are not losing hope, we are not stopping. Every day we are looking for some diplomatic option that might work.’

Meanwhile, a Washington-based think tank, the Institute for the Study of War, said Ukraine may be able to push Russian forces out of artillery range of Kharkiv in the coming days, providing a respite for the city and an opportunity to build the defenders’ momentum ‘into a successful, broader counteroffensive.’

Zelensky expressed outrage at Russian missile attacks that destroyed a museum in the Kharkiv region and hit Odesa, ‘where almost every street has something memorable, something historical.’

He said Russian forces have destroyed or damaged about 200 cultural heritage sites.