Thousands of Victorians trying to book in their COVID-19 vaccines have been left frustrated as the state’s coronavirus hotlines buckled under a deluge of calls for a second day in a row and people in their 40s were turned away from mass vaccination centres.

The state government set up a dedicated vaccination hotline on Friday morning after the coronavirus hotline crashed for several hours on Thursday amid overwhelming demand following its decision to offer vaccinations to those aged over 40. 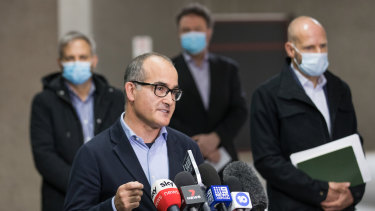 But the new service also malfunctioned as tens of thousands of people attempted to call the number at the same time.

For hours on Friday, a recorded message was introduced on the general coronavirus vaccine line instructing callers to ring the new vaccine phone line if they wanted to book in for their shots.

Callers said they were hung up on, had their calls go unanswered, or continually heard the engaged signal when attempting to get through on the new vaccine line. Some calls to the phone line were still going unanswered at 3.30pm on Friday.

Confused Victorians then began calling hospitals directly in an attempt to book their vaccines at hospital-run vaccine clinics.

Victorians aged between 40 to 49 were turned away on Friday from the Royal Exhibition Building mass vaccination clinic in Carlton after queuing for hours for Pfizer shots.

The clinic, run by St Vincent’s Hospital, turned under-50s away after it paused walk-ins for COVID-19 vaccines due to a high number of bookings.

Western Health, which runs mass vaccine centres at the Royal Melbourne Showgrounds and Sunshine Hospital, also paused all walk-ins on Friday and was only accepting people who had made a booking through the COVID-19 hotline.

The Alfred hospital, which runs a smaller vaccine clinic that opened to the public this week, is only accepting people who have booked in for an appointment through the hotline.

The COVID-19 hotline received more than 77,000 calls in just 15 minutes on Thursday, after the government announced people aged 40-49 would be able to receive the Pfizer vaccine, but first had to make an appointment. This prompted the government to promise more resources to ensure that more calls were answered.

Public servants are now being called upon to answer phones in the overwhelmed call centre, and assist with contact tracing, as four new coronavirus cases were confirmed in Victoria on Friday, all connected with Melbourne’s northern suburbs cluster, which has swelled to 30 people.

Fifteen thousand Victorians have now been identified as primary and secondary contacts – up from around 10,000 on Thursday – and have been told to isolate, and 121 exposure sites have been identified so far including several bars and pubs.

Victoria entered the first day of a seven-day lockdown on Friday, with new restrictions imposed by the state government in a bid to stem the spread of the virus.

The Age has seen an email sent out from Department of Justice secretary Rebecca Falkingham asking staff to work in the state’s call centres “to support the contact centre in answering calls from the public and to support the COVID-19 response”.

Despite the extraordinary demand to book in vaccines, an online booking system promised by the state government is not yet up and running.

Asked about the delays at a press conference, deputy chief health officer Professor Ben Cowie – who is leading Victoria’s vaccine roll-out across 34 state-run vaccine clinics – urged people to be patient and keep calling the coronavirus hotline until they reached an operator.

“I would say if you are one of those tens of thousands of Victorians calling in at any one time, please, if you cannot get through, I’m sorry, but if you could possibly call back in the afternoon … ” Professor Cowie said.

“We commit to vaccinating every single Victorian who wants to be vaccinated in the coming weeks.”

Professor Cowie urged people not to call hospitals directly, warning it could led to some vaccination centres being completely overrun.

“What we don’t want to see is some sites being booked out for weeks and other sites being under utilised, ” Professor Cowie said.

Austin Health, which runs a mass vaccine clinic at its Heidelberg Repatriation Hospital, is accepting bookings through its own online service. It reported early Friday morning that it had fully booked out its Pfizer appointments until the end of June.

It had also put a pause on walk-ins due to high numbers of people attempting to get their vaccines without booking appointments.

The health service still has hundreds of appointments available for the AstraZeneca vaccine over the coming weeks.

Austin Health later confirmed it was expanding capacity at its mass vaccination hub and rolling out more vaccine cubicles so it could book in thousands more Victorians for their Pfizer shots in coming months.

Victoria is currently receiving 70,000 doses of the Pfizer vaccine per week, as well as an increasing amount of AstraZeneca doses.

Due to the rush to get immunised as the outbreak continues to grow, Professor Cowie said some Victorians were booking in at least four weeks in advance for their vaccines.

Professor Fiona Russell, a vaccines adviser to the World Health Organisation, said on Thursday Victoria’s plan to widen vaccine accessibility to those in their 40s failed to target young people, who posed the greatest danger of spreading the virus quickly during an outbreak.

Professor Cowie said he wanted to see the vaccine program extended to people under 40 as soon as the state had capacity.

He said the state administered 17,000 doses on Thursday, while general practitioners administered more than 6600 doses.

Get our Coronavirus Update newsletter

Stay across the news you need to know related to the pandemic. Sent Monday and Thursday. Sign up here.