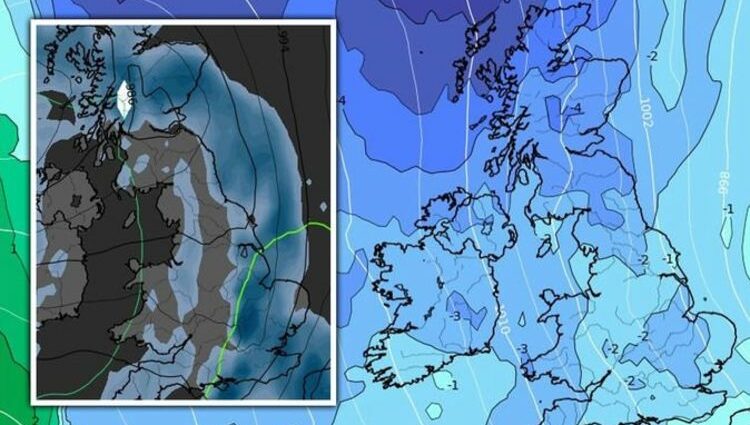 Throughout Thursday and Friday, the Met Office has weather warnings issued for heavy rain, with the weekend set to stay wet for many. Meteorologists and forecasters have said that while the worst of the wet weather has arrived, cooler temperatures are expected to kick off November for much of the UK.

Marco Petagna, Media Advisor for the Met Office, told Express.co.uk the weekend will see the mercury drop after the heavy rain.

He said: “A slow-moving band of rain which has brought flooding to some northern and western areas will gradually move eastwards across the UK over the next 24 hrs or so, followed by cooler, brighter and more showery conditions later on Friday.

“Further wet and at times quite windy weather is expected heading into the weekend.

“Saturday will see further rain at first, giving way to sunshine and showers, with a spell of more persistent rain and potentially gale force winds sweeping northeast across all parts into Sunday.

“A mix of sunshine and showers will return next week, and with the wind swinging more into a north or northwesterly direction, temperatures are likely to drop to around average or just below.”

Maps from WXCharts see the weekend record maximum temperatures of 18C (64.4F), with the mercury dropping to a more seasonable maximum of 14C (57.2F) on Monday.

Wednesday is set to be the coldest day in the week ahead, with maximum temperatures of 13C (55.4F) in the southeast but near-freezing temperatures seen across the UK.

Scotland and northern England could see maximum temperatures of 6C (42.8F) by midday, while the Highlands stay just above freezing with 2C (35.6F) on the mercury.

The Met Office previously said there is a possibility of snow as November begins.

Temperatures could reportedly drop to -3C in large parts of Scotland while the rest of the UK is expected to stay just above freezing.

The Met Office’s forecast for the first week of November said: “There is a low risk of a potentially very windy spell lasting into early next week.

“Thereafter, a spell of cooler weather is expected due to northwesterly winds, possibly becoming northerly later.

“It will remain unsettled, where longer spells of rain will be interspersed with showers, and there is the potential for further episodes of strong winds.

“As a result of this, temperatures will be at or below average, and this will be cold enough for snow over the Scottish Highlands.”

Ian Simpson, forecaster for Netweather.tv, also said that after this week’s rain band, more wet weather is expected throughout the week.

He said: “Sunday will see another rain belt spread eastwards across England during the morning and early afternoon, and spreading slowly northwards through Scotland, where many places will have a predominantly dull wet day.

“Brighter weather with some scattered showers will follow from the west.

“Temperatures during the weekend look set to be close to the seasonal average, reaching 11 to 13C in central, southern and south-eastern England, and 8 to 10C over much of Scotland and Northern Ireland.

“The trend of the weather staying unsettled and turning cooler will continue into early next week.

“It looks probable that there will be a northerly blast midweek, bringing drier and colder weather to most parts of the country, with plenty of sunshine.”

BBC Weather has also warned that during the latter half of November, colder North Atlantic air is set to arrive from Greenland, likely sending temperatures plummeting to below average.

The forecast for November 8-21 reads: “Mid-November will likely be a transition period as high pressure gradually shift into western Europe and the Atlantic, displacing low pressure troughs into Northeast Europe.

“During this transition, the weather in the UK will likely remain unsettled with temperatures trending near or below average for most places as winds shift more to the northwest.

“As we head into the second half of November, we think the blocking high will be in place and linger just to the west of us.

“This means north westerly winds bring in colder North Atlantic air from Greenland, so temperatures should tend to be below average.

“However, weather fronts will be deflected east, so it should be dry and calm.

“Frost is likely overnight in these conditions, and any weak showers that reach into northern Scotland could turn wintry in the hills.”