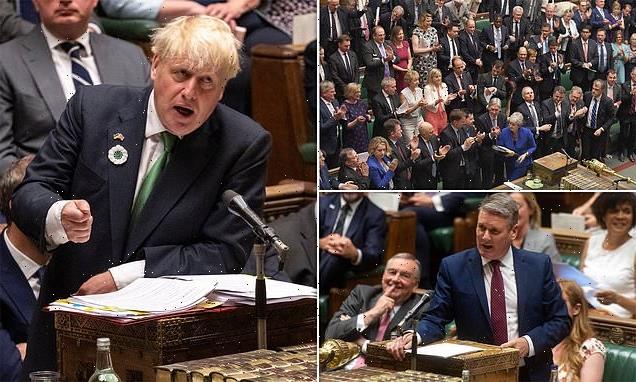 Boris takes final PMQs TODAY as he prepares to hail his Brexit legacy and urge successor to keep ‘levelling up’ – but will outgoing PM give ‘Sir Beer Korma’ another new nickname? And will MPs give Johnson a standing ovation like Blair, Cameron and May?

Boris Johnson will face his final session of Prime Minister’s Questions today as he continues his long goodbye from Downing Street.

With MPs heading away from Westminster for their summer break from tomorrow, today’s PMQs is the last before Mr Johnson is replaced as Tory leader.

He is likely to seize on the opportunity to hail his legacy as the Prime Minister that got Brexit done, to highlight Britain’s swift Covid vaccine rollout, and to urge his successor to maintain his ‘levelling up’ agenda’.

Mr Johnson also might not be able to resist a parting dig at Labour leader Sir Keir Starmer, who he has previously dubbed ‘Captain Hindsight’, ‘Sir Beer Korma’, and ‘Captain Crasheroonie Snoozefest’.

It has become tradition for departing PMs to be given a standing ovation in the House of Commons when their final PMQs ends.

But – with large numbers of Tory MPs having revolted against Mr Johnson’s premiership, and many opposition MPs seeing him as a hate figure – it is unclear how many in the House will rise to their feet. 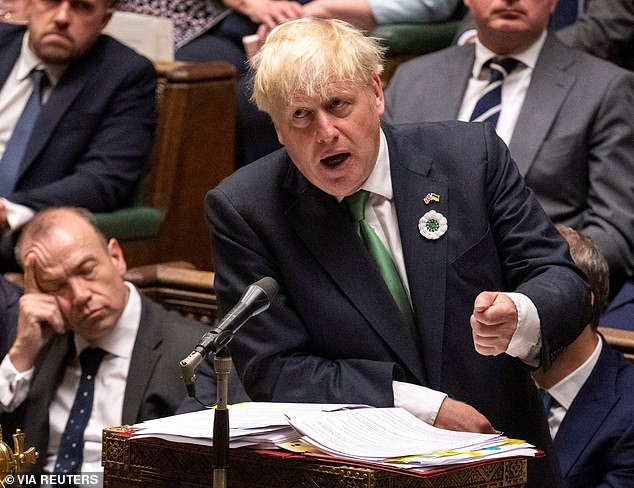 With MPs heading away from Westminster for their summer break from tomorrow, today’s PMQs is the last before Boris Johnson is replaced as Tory leader 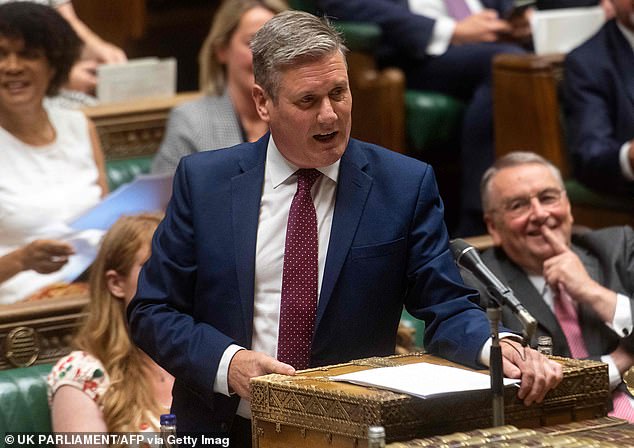 What did past PMs say as they ended their final PMQs?

Sir Tony Blair: ‘Some may belittle politics but we know it is where people stand tall. And although I know it has its many harsh contentions, it is still the arena which sets the heart beating fast. It may sometimes be a place of low skullduggery but it is more often a place for more noble causes. I wish everyone, friend or foe, well and that is that, the end.’

David Cameron:  ‘The last thing I would say is that you can achieve a lot of things in politics and get a lot of things done; in the end, public service and the national interest is what it is all about. Nothing is really impossible if you put your mind to it. After all, as I once said, I was the future once.’

Theresa May: ‘This House of Commons is rightly at the centre of those events, and that is because of the vital link between every single Member of this House and the communities—the commons—that we represent. That is the bedrock of our parliamentary democracy and of our liberty, and each one of us, wherever we sit and whatever we stand for, can take pride in that. That duty to serve my constituents will remain my greatest motivation.’

The warmth of the reception granted to Mr Johnson today is already the subject of speculation at Westminster.

Mr Johnson today is already the subject of speculation at Westminster.

One senior MP told MailOnline: ‘It will be interesting to see if he gets a good reception.

‘There might be a few boos as well as cheers. All previous PMs have been clapped out of the chamber.’

They added: ‘The benches should be packed but people could start leaving before the end… Tory MPs have a lot of other stuff to do today.’

When Sir Tony Blair ended his final PMQs, both the Labour and Tory benches – led by David Cameron – rose to applaud him.

And, when Mr Cameron and Theresa May ended their final PMQs, then Labour leader Jeremy Corbyn resolutely remained seated, although some on the Labour back benches stood to applaud.

The SNP have also refused to pay tribute to departing Tory PMs in recent years.

Mrs May’s final PMQs lasted more than an hour, but Tory MPs will be agitating for today’s session – due to begin at noon – to wrap up quicker than that.

At 1pm, they are set to vote in the final round of the contest to replace Mr Johnson, with one of Rishi Sunak, Liz Truss and Penny Mordaunt due to knocked out the race this afternoon.

A final pairing will then be put to the Conservative Party’s wider membership with the results of grassroots vote to be announced on 5th September.

Mr Johnson will then formally hand over as PM to the new Tory leader on 6th September.

Barring any emergency events over the summer, today is Mr Johnson’s last scheduled appearance in the Commons as PM. 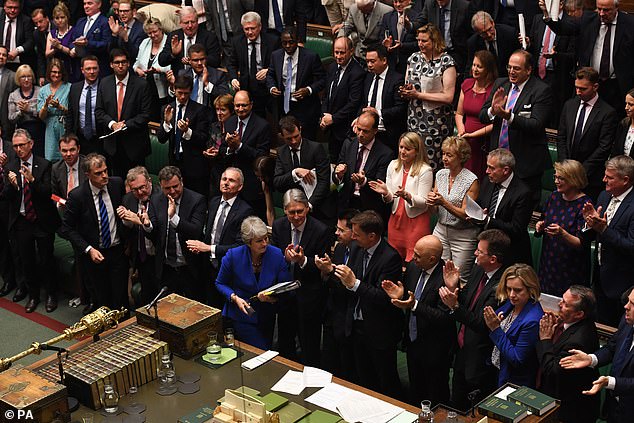 Theresa May’s final PMQs lasted more than an hour, but Tory MPs will be agitating for today’s session to wrap up quicker as they continue the contest to elect Mr Johnson’s successor 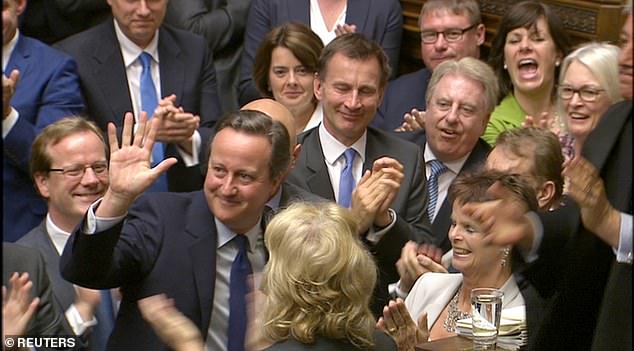 Like Mrs May, her predecessor David Cameron was also given a standing ovation by MPs at the end of his final PMQs 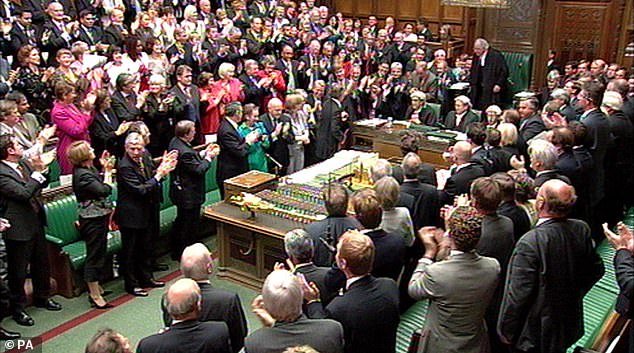 Before departing PMQs for the final time, Sir Tony Blair told the House of Commons: ‘I wish everyone, friend or foe, well and that is that, the end.’

The PM gave a flavour of what his parting words might be when he addressed MPs on Monday ahead of a confidence vote in his Government.

He delivered a full-throated defence of his time in power as he hailed his Government for fighting ‘some of the hardest yards in modern political history’.

Mr Johnson told MPs how he had got the ‘big calls right’ despite having to take some of the ‘bleakest decisions since the war’.

As a former journalist and author of a number of books, the PM is likely to have  spent a while crafting his final line to MPs today.

At his own final PMQs in 2016, Mr Cameron quoted a line from his first PMQs appearance – when he faced Blair as leader of the opposition – telling MPs: ‘I was the future once.’

Nine years earlier, Sir Tony himself told the Commons: ‘I wish everyone, friend or foe, well and that is that, the end.’

And, in 2019 before she handed over to Mr Johnson, Mrs May – who unlike Sir Tony and Mr Cameron has remained in the Commons – told MPs: ‘That duty to serve my constituents will remain my greatest motivation.’

Lates News:
2022-07-20
Previous Post: What does the Coinbase Premium Gap Tell us about Investor Activity?
Next Post: Horror moment ‘man-eating’ crocodile drags man off kayak and mauls him to death