A legal challenge has been filed against the Andrews government’s curfew policy, arguing it is unreasonable, disproportionate, and violates the human rights of millions of Victorians.

Restaurant owner Michelle Loielo filed the writ in the Supreme Court on Tuesday, naming Associate Professor Michelle Giles as the defendant in her capacity as Deputy Public Health Commander. 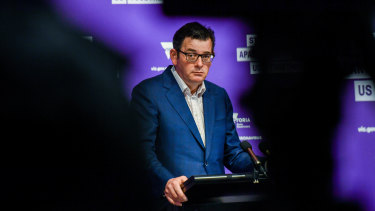 Ms Loielo, 41, said she feels “helpless” in the face of ongoing restrictions and fears that seeing the revenue of her business, Unica Cucina E Caffe, in Capel Sound on the Mornington Peninsula, drop by an estimated 99 per cent may result in her losing her house.

“The toll on my children is the greatest concern to me,” she says in a sworn affidavit.

Two sources with knowledge of the litigation have told The Age the case is being backed by prominent business figures.

Ms Loielo lost her husband to cancer two-and-a-half years ago and she is now the primary carer for her three daughters.

“I am the sole financial provider for my three children and I am genuinely concerned that I am not going to be able to provide for my children if this situation continues.”

The government has said the curfew will remain in place until October 26, or until Melbourne reaches a fourteen-day average of five cases per day. The curfew came into effect on August 2.

If successful, the suit may render the curfew invalid and affect the lives of millions of Victorians in one decision.

The writ states that the human rights of Victorians have been infringed and that the curfew amounts to an unlawful restriction of movement, arbitrary detention and a deprivation of liberty.

"The defendant acted under the direction and at the behest of the Premier of Victoria … and failed to give any real independent consideration as to whether it was appropriate to make the curfew directive," the writ states.

"The curfew directive is invalid on the grounds of irrationality and illogicality … in that it is arbitrary, capricious, unjust and not based on relevant and reliable evidence."

"The curfew directive has had, and continues to have, the effect of violating the human rights of the plaintiff," and "the defendant has contravened section 38 of the Charter."

The curfew currently limits Victorians to a maximum of two hours exercise each day and mandates that from 9pm to 5am residents must be inside their homes. The writ is not challenging the exercise restriction.

Last week the future of the curfew was thrown into doubt after Premier Daniel Andrews admitted it was the government who decided to put it in place, and it was not requested by health authorities or Victoria Police.

The toll on my children is the greatest concern to me.

An application to escalate the case to the Court of Appeal will be heard in the Supreme Court on Wednesday.