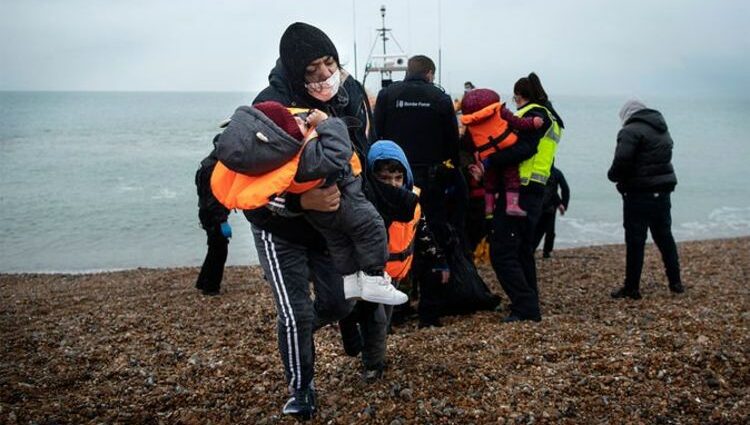 Migrants: Boris Johnson speaks after deaths in the Channel

Hundreds of people attempted to cross the English Channel on Wednesday. 671 were stopped by authorities. 55 survived the perilous journey from France to the UK, and at least 27 died tragically – among them, an Afghan soldier who had worked with the British armed forces.

Sanowbar, a special forces officer in the Afghan Army, had decided to make the crossing with his family because they had “waited so long for help from the UK”.

His brother Khan, 40, was among the Iraqi Kurds and Afghans who made it to Kent. He told The Times: “We had a house, we had a life, everything. But the problems started with the Taliban.

“Because he [Sanowbar] worked with the British, this is problems with the Taliban.

“All the time, this is why I come with my children.

“We have all the documents, but we waited so long for help.”

“Of course we left because of the Taliban.”

The UK evacuated thousands of people eligible for the Afghan Relocations and Assistance Policy (ARAP).

However, many others who were made Taliban targets because of their work with the British military are still waiting for help, with ministers facing criticism for failing to establish a suitable resettlement scheme following the withdrawal of Western troops in the country three months ago.

The Government pledged to relocate up to 20,000 people after the Taliban took control of Kabul in August, but the Afghan Citizens’ Resettlement Scheme (ACRS) has not yet launched.

The Home Office was last week unable to confirm whether it would be ready by March next year.

Labour MP Bambos Charalambous warned Tories of the consequences the delay of the resettlement scheme could have. He told the House of Commons: “There is a real risk that the people whom the scheme is intended to help will die before it becomes operational.”

Victoria Atkins, the minister responsible for Afghan resettlement, said: “We are working urgently across government and with partners such as the United Nations High Commissioner for Refugees (UNHCR) to design the scheme.

On top of Wednesday’s 27 deaths, another 14 people have drowned this year while attempting to make the crossing, French officials said.

Bernard Barron, president of the SNSM rescue service in Calais, described the accident as “group murder”.

He explained the small boat “was completely deflated” when they found it.

Mr Barron said: “Migrants are forced into the boat, and their feet are in water and fuel.

“These are unimaginable conditions.

“Often only women and children have life jackets, and these boats don’t have navigation lights or radar receivers.”

French Interior Minister Gerard Darmanin told RTL radio: “Those responsible for the tragedy which took place yesterday in the Channel are the smugglers, who for a few thousand euros promise Eldorado in England.

“The smugglers are criminals, this tragedy reminds us, painfully.”

“We tell our Belgian, German and British friends they should help us fight traffickers that work at an international level.”

Mr Johnson and French President Emmanuel Macron agreed to step up efforts to stop migrants from making the perilous journey in an emergency phone call on Wednesday.

The £54m the UK offered France to increase police patrols along its coastline, boost aerial surveillance and increase security infrastructure at ports have not proven helpful in tackling the migrant crisis so far.

The International Organization for Migration dubbed Wednesday’s tragedy the worst single loss of life in the English Channel since it began collecting data in 2014.

Lates News:
2021-11-25
Previous Post: Finnish regulators tighten the screw on virtual currency marketing
Next Post: Teacher had sex with schoolboy in car and sent him and his brother nudes