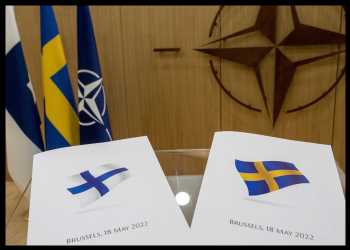 A top official of the U.S. Department of Defense has strongly urged the Senate Foreign Relations Committee to quickly approve the request of Finland and Sweden to join NATO.

“The Department of Defense assesses that Finland and Sweden are ready for NATO membership,” Celeste A. Wallander, Assistant Secretary of Defense for international security affairs, said at a Senate Foreign Relations Committee hearing Wednesday.

Finland and Sweden would provide additional security and stability in Europe, according to Wallander. The two Baltic nations already have close bilateral defense relationships with the United States, and also have close working ties and military interoperability with NATO militaries, she noted.

Finland and Sweden simultaneously handed in their official letters of application to join the North Atlantic Treaty Organization in May.

NATO Allies are considering the next steps on the two Nordic nations’ path to the defense alliance.

This move by Stockholm and Helsinki marks a major shift in the neighboring nations’ decades of military neutrality, evidently influenced by Russia’s invasion of Ukraine.

The process to accommodate the applicants could be fast-tracked and is expected to only take a few weeks, but application for NATO membership requires approval by all the countries of the 30-member bloc.

The fact that Sweden and Finland petitioned to join the defensive alliance is a sign of how much the security environment has changed with Russia’s invasion of Ukraine. Both nations have been partners with NATO for decades, but were not interested in joining the treaty organization.

But Russia’s invasion of Ukraine caused a seismic shift in public opinion in Finland and Sweden, and the legislatures of both countries quickly debated and ratified a motion to join the 30-nation alliance.

Wallander said both Finland and Sweden are ready to contribute to the alliance’s defense now. Finland maintains general conscription and has a well-manned and trained reserve that can be called up quickly, which is key, since that country shares a long border with Russia.

“Finland’s location on the Baltic Sea, diplomatic experience with Russia and advanced capabilities make it an asset to the alliance,” she told the senators. “Finland spends more than 2 percent of its [gross domestic product] on defense, and possesses unique military capabilities and expertise, particularly operating in the arctic environment,” she added.

Sweden became a NATO Partnership for Peace member in 1994, and a NATO enhanced opportunities partner in 2014.

It has contributed to or supported NATO missions in Afghanistan, Bosnia and Herzegovina, Iraq, Kosovo and Libya.