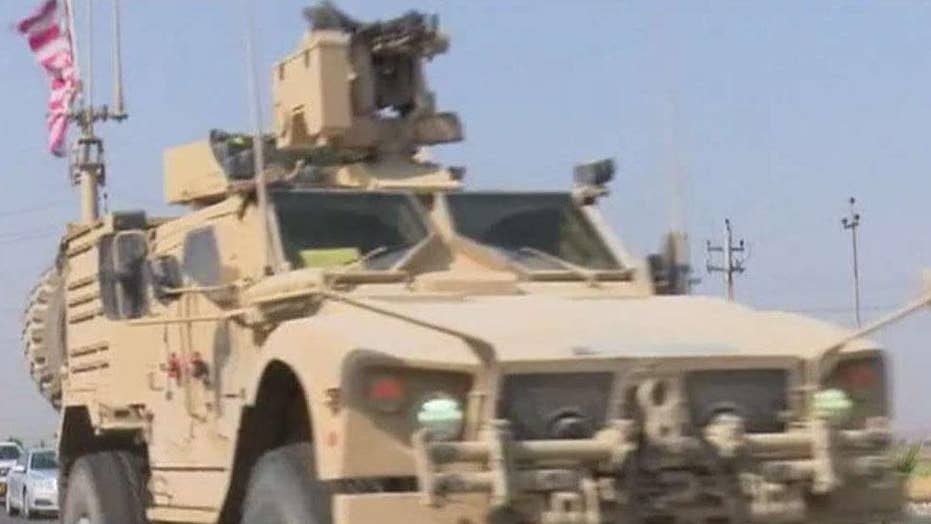 Presidents Erdogan and Putin agree to have Turkish and Russian troops carry out joint patrols on the border ahead of the cease-fire expiration; Jennifer Griffin reports from the Pentagon.

We very much appreciate the Trump administration’s efforts to secure a cease-fire in northeast Syria. This gives all parties an opportunity to reset and take stock of the path ahead. Vital American interests are still at stake.

Turkey’s incursion into Syria has created strategic problems for us and our allies. Turkey, by attacking Kurdish forces that led the effort to destroy ISIS, is paving the way for an ISIS comeback.

While President Trump is correct in saying the ISIS caliphate has been destroyed, there remain thousands of ISIS fighters still in Syria. ISIS will regenerate and again seek to establish a caliphate or at least a base of operations in its spiritual home of Raqqa, Syria without continuing efforts by the United States, our Kurdish partners, and the international community.

Our focus must remain squarely on ensuring ISIS does not come back as a threat to the United States and the world at large.

The U.S. must also make sure that Iran does not fill in the vacuum created by Turkey’s invasion, creating additional threats to our ally Israel.

Northeastern Syrian oil fields, where we presently have troops, can be a beneficial asset for us and our allies. Instead, they are about to fall into Iranian hands and the proceeds – funneled straight to Tehran – could be used to fund further operations against the United States and Israel.

Russia and Syrian President Bashar Assad will likewise benefit from Turkey’s offensive. Alongside Iran, they will gain access to oil fields in eastern Syria and to new recruits from among populations that will have nowhere to turn after U.S. forces leave.

Russia will use its newly unchallenged role in Syria to co-opt and sell weapons to America’s allies in the region. Assad will redouble his slaughter of innocent Syrians.

While we recognize Turkey has legitimate national security concerns about Kurdish elements in Syria, we do not support a Turkish military occupation of large parts of Syria.

Nor do we support any agreement that allows the ethnic cleansing of Syrian Kurds along the border from their ancestral homes. This position is simply unacceptable to the Kurds and will only create further chaos and bloodshed, while empowering America’s adversaries.

At relatively low cost, the U.S. can still prevent an ISIS return, continue to contain Iran, and restrict the freedom of Russia and Assad.

In Syria, the U.S. has already created an unprecedented new model for conducting significant military operations abroad. We provided a small ground force and American airpower, working alongside local populations that bore the brunt of the fighting.

The U.S. action was amazingly successful, enabling us to address a grave threat to American security at a low cost, while simultaneously enabling local populations to take greater responsibility for their own security.

We have lost nine soldiers in Syria over the last four years in military operations. God bless them and their families, but we must remember that the Kurds have lost thousands in the fight against ISIS. They own this fight.

We, like most Americans, firmly believe that the best defense for America against radical Islam is a forward-deployed presence working with indigenous populations like the Kurds.

Tens of thousands of Arabs decided to join the Kurdish-led force in Syria after witnessing the effectiveness of this partnership. By abandoning our Kurdish partners, we discard that Arab support and deter others from joining us in the future.

To continue this successful model, local populations must believe that we are a reliable ally and will not abandon them before they are able to survive on their own.

Our objectives are still achievable, but this will require sternly dealing with Turkey, unequivocally supporting our Kurdish and Arab allies, and maintaining a presence that would prevent the re-emergence of ISIS and misadventures by Iran, Russia and Assad.

It is imperative that the United States maintain control of the skies above northeastern Syria and provide a small but capable advisory force to the Syrian Democratic Forces to enable their continued operations against ISIS.

We encourage President Trump to form a joint enterprise between the United States and our Syrian Democratic Force allies to maintain control over the oil fields and use the proceeds for the benefit of those who helped us destroy ISIS and to help offset the cost for America’s commitment.

Having American oil companies modernize the oil fields and sharing the revenue with reliable partners is a win-win. Most importantly, it prevents the oil from falling into Iranian and Russian hands to be used against us.

The pause in military operations achieved by the Trump administration gives us a real opportunity to create stability in Syria that has eluded us for years.

We will continue to work with President Trump to ensure that our vital national security interests are achieved in Syria. We urge Congress to partner with the Trump administration in a show of unity that will be encouraging to our friends and demoralizing to our adversaries.

Jack Keane is a Fox News senior strategic analyst and a retired general who served as U.S. Army vice chief of staff. He is chairman of the Institute for the Study of War.