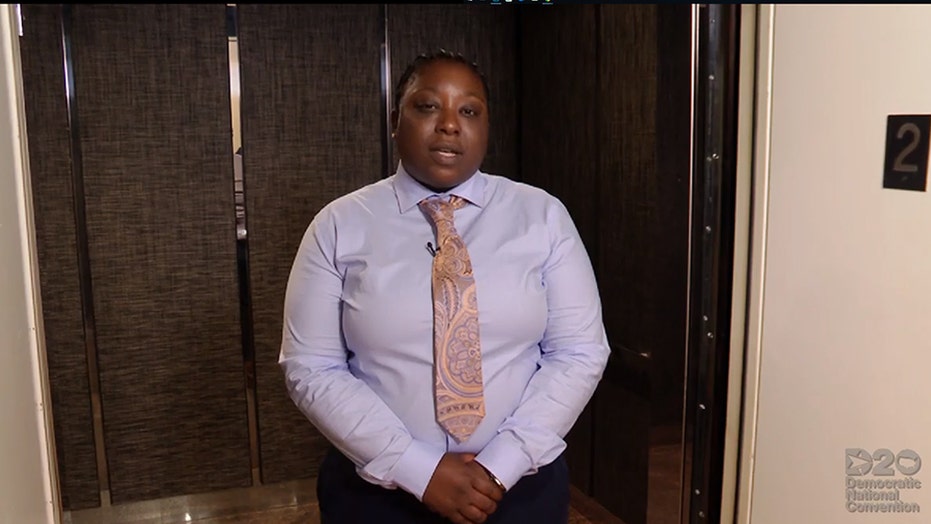 A security guard seen blurting “I love you” to Joe Biden in a viral video nominated him for the Democratic Party’s presidential ticket Tuesday night,

"In the short time I spent with Joe Biden I could tell he really saw me," said Jacquelyn Brittany, who declined to publicize her last name, "That he actually cared, that my life meant something to him."

"That's because Joe Biden has room in his heart for more than just himself," she continued.

"We’ve been through a lot, and we have tough days ahead. But nominating someone like that to be in the White House is a good place to start. That’s why I nominate my friend, Joe Biden, as the next president of the United States."

Nominating speeches typically go to elected officials, but Jacquelyn caught the Biden team’s eye when she escorted him up to an interview with the New York Times Editorial Board in 2019.

“I love you, I do,” Jacquelyn told Biden proudly. “You’re, like, my favorite.”  Biden asked her if she had a camera to take a photo together. “You are awesome, oh my God,” she said. The footage was captured for “The Weekly,” a New York Times docuseries, and circulated online.

Biden brushed off the snub. “I got something better," he said. "I got to meet Jacquelyn."

Jacquelyn will join Sen. Chris Coons, D-Del., and Rep. Lisa Blunt Rochester, D-Del., on Tuesday night to deliver remarks ahead of the convention’s roll call vote, according to a Washington Post report.

“He’s been through so much,” Jacquelyn said of Biden, whose daughter and first wife died in a car crash and son Beau died of brain cancer. “And he doesn’t show it on the outside. He may feel it on the inside — and I’m that type of person,” she told the Post, adding that she’d faced hard times spending stints in foster care as a child.

Jacquelyn said at the time she hadn’t realized she would be filmed for the docuseries while escorting the former vice president in the elevator. But she said she was thrilled to find out she’d be able to escort him upstairs.

“Once he came in, he was just genuinely, genuinely nice to people. We don’t get that from everybody,” Jacquelyn said.

Jacquelyn said the idea that she’d get to nominate Biden is “overwhelming.”