In Pennsylvania, President Trump and Republicans loyal to him have sought to overturn his defeat by making false claims about widespread voting fraud in Philadelphia.

In Georgia, they have sought to reverse his loss by leveling similar accusations against Atlanta.

In Michigan, Republicans have zeroed in on Detroit, whose elections system the president has falsely portrayed as so flawed that its entire vote should be thrown out.

Lost on no one in those cities is what they have in common: large populations of Black voters.

And there is little ambiguity in the way Mr. Trump and his allies are falsely depicting them as bastions of corruption.

“‘Democrat-led city’ — that’s code for Black,” said the Rev. William J. Barber II, the president of the civil rights group Repairers of the Breach. “They’re coupling ‘city’ and ‘fraud,’ and those two words have been used throughout the years. This is an old playbook being used in the modern time, and people should be aware of that.”

Mr. Trump’s fruitless and pyromaniacal campaign to somehow reverse President-elect Joseph R. Biden Jr.’s victory in the election rests on the wholesale disenfranchisement of hundreds of thousands of voters, a disproportionate number of them Black Americans living in the urban centers of Georgia, Pennsylvania, Wisconsin and Michigan.

Notably absent from the effort has been any focus on predominantly white suburban areas where the president performed better, but where he lost ground compared with four years ago and arguably lost the election.

The campaign is not Mr. Trump’s alone. He has had help from supporters and allies throughout the country, as well as from the Republican National Committee and its state branches.

And, in a year in which the nation elected its first Black vice president, Senator Kamala Harris of California, the push represents a newly conspicuous phase of a decades-long effort by the Republican Party to expand power through the suppression of voters of color. Those voters have largely remained loyal to the Democrats while Republicans consistently win the white vote.

Over the past several years, that Republicans’ effort has consisted mostly of new state and local election laws that, in the name of combating fraud, have restricted voting in ways that often place a disproportionate burden on Black and Latino voters. Civil rights leaders and Democrats have cited these laws as not-so-subtle efforts at voter suppression, and, in several court cases, judges have agreed.

Mr. Trump has frequently maligned Black leaders and cities. He applauded Black voters who chose not to vote in 2016 even as he has claimed to have done more for Black Americans than any president since Abraham Lincoln. And he has not flinched in pursuing what Vanita Gupta, the president of the Leadership Conference on Civil and Human Rights, called “a return to very blatant Jim Crow tactics — to just try to throw out validly cast ballots and targeting certain cities that are Black-majority.”

Ms. Gupta, who was the chief of the Justice Department’s civil rights division under President Barack Obama, added: “People will say this isn’t the intent, the intent is more partisan. But I think what we are seeing through this election cycle is that in many instances it can appear motivated by partisan politics, but in the end the victims are Black voters.”

Over the weekend, Mr. Trump shared on Twitter his hope that the courts or state lawmakers would throw out the popular vote entirely in states he lost, effectively allowing legislatures to submit their own, pro-Trump slates of electors to the Electoral College.

His lawsuits trying to scuttle the state-by-state certification process that will cement Mr. Biden’s presidency at the Electoral College have failed miserably — including in a stinging dismissal on Saturday by a federal judge in Pennsylvania — and he has put more pressure on local officials to intervene on his behalf.

His effort faces two tests on Monday. Pennsylvania counties are set to submit their certified vote totals. And Michigan’s four-member state canvassing board has its deadline to certify the state’s election results. At least one of its two Republican members has indicated he may not do so because of minor irregularities in Wayne County, which includes Detroit.

State officials and election lawyers say it is highly unlikely that even a failure by the canvassing board to certify would ultimately cost Mr. Biden the state in the Electoral College. But the NAACP Legal Defense and Educational Fund, the nation’s oldest civil rights law firm, is not taking any chances with the votes from Detroit, with a population that is 79 percent Black.

In a lawsuit it filed against Mr. Trump and his campaign over the weekend, the firm said, “Defendants are openly seeking to disenfranchise Black voters,” adding, “Defendants’ tactics repeat the worst abuses in our nation’s history, as Black Americans were denied a voice in American democracy for most of the first two centuries of the republic.”

The firm said Mr. Trump’s attempt to pressure the Michigan canvassing board and the State Legislature was a violation of the provision against voter intimidation in the Voting Rights Act of 1965. 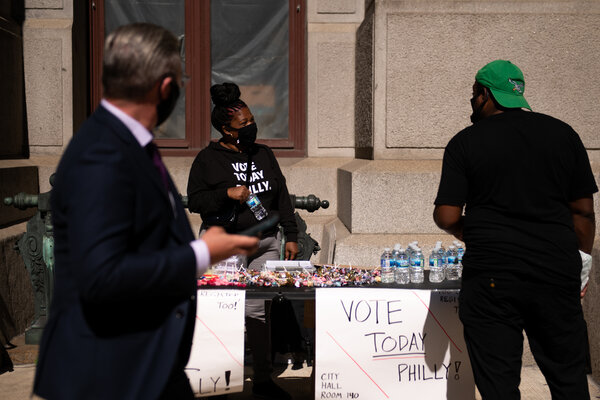 That provision, initially devised to crack down on tactics meant to drive Black and Hispanic voters away from the polls, stipulates that it is illegal “to intimidate, threaten or coerce any person for urging or aiding any person to vote or attempt to vote.” The NAACP Legal Defense Fund is asking the Federal District Court in Washington to order the party to cease its pressure campaign.

“The Voting Rights Act of 1965 flatly prohibits defendants’ efforts to disenfranchise Black people,” the suit reads. “This is a moment that many of us hoped to never face. But here we are, and the law is clear.”

It was the Voting Rights Act, signed by President Lyndon B. Johnson against the wishes of some of his fellow Southern Democrats, that truly started the Republicans on a path to impose limits on voting in the name of fighting election fraud, for which little evidence exists.

The G.O.P. was the original party of civil rights during slavery and afterward. But during the 1960s and beyond it sought to appeal to disaffected, segregationist Democrats through a so-called Southern strategy.

As the percentage of nonwhite voters in the country grew, Democrats began to gain an edge. Republican governors and legislatures enacted a raft of new voting laws, such as requirements that voters at the polls show types of official photo identification that Black and Hispanic people were disproportionately less likely to have.

Mr. Barber said the victory by Mr. Biden and Ms. Harris was all the more remarkable given that it came in the face of those changes in voting laws, showing that “when people have an opportunity to vote, they will clearly vote their interests.”

Mr. Trump’s campaign against the results has focused on moves by state and local officials to make voting easier during the coronavirus pandemic, particularly mail voting.

But the degree to which the president is now pinpointing voters of color for disenfranchisement is striking even by modern Republican standards, especially after he performed better with Black voters this year than he did four years ago.

Mayor Tom Barrett of Milwaukee noted in an interview that Mr. Trump was hyper-focused on his city, which is about 39 percent Black and 19 percent Latino, and not on the predominantly white and Republican-leaning suburbs outside it, which had the same regulations that the Trump campaign was challenging in Milwaukee.

“We are absolutely witnessing in real time an effort to disenfranchise people of color throughout Milwaukee County,” said Mr. Barrett, a Democrat. (The president is also pressing for a recount in Dane County, a predominantly white area of Wisconsin with a considerable college student population.)

In Pennsylvania, Mayor Jim Kenney of Philadelphia, also a Democrat, pointed to the Republican-led General Assembly’s refusal to allow election officials to begin processing absentee ballots early as a direct attack on the vote in his city, which would struggle under the sheer volume of votes while more rural and white counties would have a much easier time processing votes.

“There were efforts right from the very beginning,” Mr. Kenney said.

Perhaps nowhere was the targeting of Black votes more explicit than in Wayne County, Mich., home to Detroit. Though Republicans pressured the Wayne County board of canvassers not to certify the vote, the number of precincts with slightly mismatched data was lower than it was in 2016, when Mr. Trump won the states by a smaller vote margin that was certified unanimously.

In initially resisting the certification of Wayne County’s votes, one of the Republican board members, Monica Palmer, said she was willing to certify every municipality in the county except Detroit, even though some cities, like the largely white Livonia, had worse irregularities. (Ms. Palmer and her fellow Republican on the board, William Hartmann, did vote to certify but have since said they were unfairly pressured into doing so.)

The Republican effort this election cycle, and its focus on disenfranchising so many Black voters, threaten to have a lasting effect on the party, current and former party members said.

“The totality of what Trump is doing and the party is supporting, combined with having the first African-American female vice president — I think it’s difficult to comprehend how much this is going to have an impact,” said Stuart Stevens, a former Republican strategist for Mr. Bush and Mitt Romney who is now an adviser to the anti-Trump group the Lincoln Project.

Michael Steele, the former chairman of the Republican National Committee, said, “How do any of the reported candidates for 2024 come back and say, ‘Oh well, we were silent while the president was trying to throw out the votes in Detroit and Milwaukee and Philadelphia, but overlook that, and support the party and support us now’?”

“It makes no sense,” he added, “for getting support in the Black community going forward.”