ICE arrests more than 2,000 illegal immigrants in raids across 24 cities

Many of those arrested were formerly convicted criminals; William La Jeunesse reports.

EXCLUSIVE: Immigration and Customs Enforcement has been branded anti-immigrant by some left-wing lawmakers and activists, but ICE's new acting director, who came to the U.S. as a refugee from Vietnam, says the agency’s work is vital to keeping a pathway open for legal immigrants.

“On April 19, 1975, my mother grabbed her three children — me included, luckily – and worked her way to Tan Son Nhat airport,” Tony Pham told Fox News in an interview.

“She was armed with a boarding letter written by a nice gentleman named John Edwards, who I was so glad to meet when I was 10 years old. But based on that letter she was able to get a seat on the flight out of Saigon that day on April 19 and — as folks would know, on April 30 Saigon fell, marking the end of the Vietnam War.”

Pham, then just 2 years old, was processed with his mother and siblings through Guam and then placed in an Arkansas refugee camp, where he was eventually reunited with his father — who had stayed on post serving with the South Vietnamese military until he also managed to escape.

In 1985, Pham became a U.S. citizen, before eventually going to law school and then becoming a prosecutor, handling narcotics, gang and firearms cases. He would also serve as superintendent of a jail in Virginia. 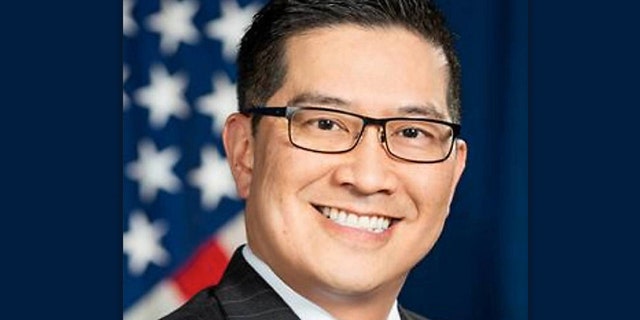 Since then, there’s been no indication of any slowing in mission or outlook from ICE.

Under Pham’s leadership, the agency has launched a number of operations targeting criminal illegal immigrants, including Operation Rise, which focused on immigrants sprung from custody by "sanctuary" cities.

Sanctuary jurisdictions are those that refuse to cooperate with federal immigration authorities, particularly on ICE detainers — requests that illegal immigrants being released from jails be transferred to ICE custody so they can be deported.

Within weeks of Pham being appointed, ICE conducted operations in California that saw 128 illegal immigrants detained. Officials said 96 percent of those arrested had convictions or pending charges for crimes, including homicide, sexual assault, sexual offenses against children, weapons offenses and domestic violence.

On Wednesday, Pham announced that more than 100 illegal immigrants had been picked up under Operation Granite in Minnesota, Kansas, Michigan, Missouri, Ohio and Texas — more than 70 percent with criminal records.

Pham told Fox News about how his background as a refugee and a prosecutor pushed him toward the role he holds now in immigration enforcement.

“I just felt that this was a nice synergy and a nice fit. … I wanted to be a part of the enforcement section of immigration because what I learned is when people cheat, or when they try to cheat the system, whether it's immigration, or if it's a school test or whether it’s the state bar exam, if they cheat they demean and diminish the lawful pathway – what my parents endured to become lawful citizens,” he said.

“Ultimately the result is … we’re preserving the integrity of that lawful pathway, because if we don’t do it, then why would anyone else want to go through that process of 10 years of labor and studying and to earn the privilege to be called a United States citizen?”

Pham brings a cheerful demeanor to the role, talking about how he is excited to lead the agency, particularly given his own background as an immigrant.

“I just really have to pinch myself because I can’t imagine in any other country a kid can come here as a refugee, his first job is flipping friggin' burgers at a local McDonalds … and somehow one day work up to being a federal principal in a national law enforcement agency,” he said. “It is a testament to what this country offers as opportunities, and I'm just that same kid who avails himself of it, but he did it through the lawful pathway.”

That breeziness disappears when it comes to the question of sanctuary cities, and attacks on the agency and its workforce, which has faced everything from Nazi comparions to calls from left-wing lawmakers and Democratic presidential candidates to abolish it outright.

Pham notes that in addition to cracking down on illegal immigration, ICE works to stop everything from human trafficking to the drug trade.

‘I don’t think people with loud megaphones and bully pulpits out there truly understand that we work as an organization every day to save children from being trafficked. We save women from being smuggled into this country, we stop cross-border smuggling of illicit contraband — drugs, narcotics — into our communities,” he said. “We don’t hear a lot about the hard work that we put in to interdict potential terrorists.”

He has faced those attacks personally. Within days of his appointment, activists protested outside his home. NBC News reported that the appointment “sparked anger among Asian American advocates” and cited experts who accused him of promoting a “good immigrant versus bad immigrant” narrative.

Pham has no issue with making a distinction between legal immigrants and criminal illegal aliens, and is clearly passionate about his opposition to sanctuary cities. He notes that a number of the people ICE picks up in raids in sanctuary cities have convictions for child sex offenses yet are released into communities.

“They have the unmitigated gall to release that person back into the immigrant community when they’re going to .. find another innocent victim, and they're going to start that cycle of abuse again,” he said.

Pham wants to educate the public about ICE's mission, including its ongoing fight against drugs and human trafficking. He also aims to encourage state and local leaders who reject ICE's work to soften their stance and work with the agency.

“From an enforcement side and growing up in a world of poverty as an immigrant who came here, I see how these well-meaning policies just backfire and wish the rhetoric would tone down with these so-called leaders in these sanctuary jurisdictions for them to really take a look at what kind of golden tool they have by partnering with us,” he said.