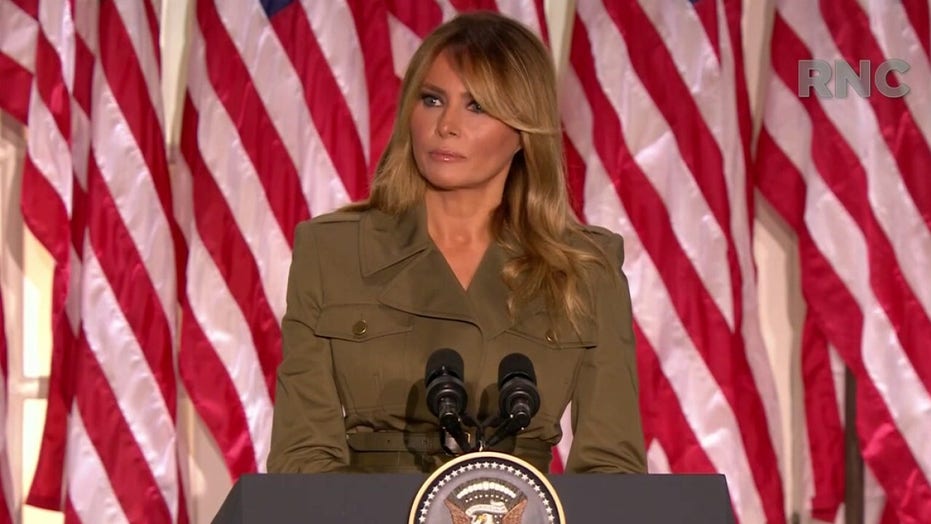 Melania Trump: My husband and his administration will not stop fighting for you

The star speaker Tuesday at the Republican National Convention was first lady Melania Trump. Standing on the shoulders of past first ladies who have addressed political conventions, she raised the bar for convention speeches by her successors.

Mrs. Trump did a brilliant job making a compassionate case for keeping her husband in office, speaking from the newly renovated White House Rose Garden.

After nearly four years of traveling the world, entertaining at the White House, and giving countless remarks, this was Mrs. Trump’s most significant speech yet, addressing many issues on the minds of American families — COVID-19, the economy, education, racial unrest, and the future of our nation.

MELANIA STANDS OUT AT CONVENTION BY COMPASSIONATELY ADDRESSING PANDEMIC

The first lady succeeded in connecting with moms, teachers, working parents, caring grandparents, immigrants and all who are looking for reassurance that things will continue to improve with her husband’s leadership.

She spoke about what she has seen during her travels with the Be Best campaign, and what she knows about the president not just as a leader, but as a husband, father and grandfather.

The tradition of first ladies speaking at political conventions is relatively new. Eleanor Roosevelt was the first wife of a president to address a convention in 1940, but it was not until the 1990s that first ladies had primetime speaking roles at televised conventions.

At the 1972 Republican National Convention, it took both actor Jimmy Stewart and then- California Gov. Ronald Reagan to quiet down the roaring standing ovation for first lady Pat Nixon that lasted nearly eight minutes as she became the first wife of a president to speak to a Republican Convention.

First lady Barbara Bush gave a major speech in 1992 as she skillfully campaigned for her husband, President George H.W. Bush. to have a second term. Since then, the remarks by first ladies have grown to be ever more important.

The 1996 campaign was historically significant for the role of the first lady because the speeches by Hillary Clinton and Elizabeth Dole were given primetime spots. Mrs. Dole could not have dazzled Americans more — walking out into the crowd with a microphone in hand and explaining why her husband, Bob Dole, should be elected president on the Republican ticket.

Hillary Clinton rose to the occasion in making the case for her husband, President Bill Clinton, to have a second term with her signature “it takes a village” theme.

Since then, the coveted honor — or burden — has become a tradition for the wives (or in the case of Bill Clinton the husband) of candidates for the nation’s highest office.

At the 2004 Republican Convention, first lady Laura Bush’s 22-minute speech in New York City serves as a model for effective speeches in trying times. Mrs. Bush was able to humanize her husband, President George W. Bush — who had become a war-time commander in chief following the Sept. 11, 2001 terrorists attacks.

Mrs. Bush told us we could trust her husband. "You can count on him, especially in a crisis. His friends don't change — and neither do his values," she said.

First Lady Eleanor Roosevelt’s impressive 1940 address, known as the “No Ordinary Time” speech, went straight to the point about the trustworthiness of her husband, President Franklin Delano Roosevelt, when she said: “You cannot treat it as an ordinary nomination, in an ordinary time. We people in the United States have got to realize today that we face now a grave, a serious situation … So each and every one of you who give him this responsibility, because you will make the campaign, you will have to rise above considerations which are narrow and partisan.”

Mrs. Roosevelt added: “You must know that this is the time when all good men and women give every bit of service and strength to their country that they have to give. This is a time when it is the United States that we fight for.” Her forthright words still ring true today with our new enemy COVID-19.

Like many first ladies of the past, Melania Trump is without a doubt one of her husband’s greatest political assets.

In her speech Tuesday night, she diplomatically echoed the importance of her husband continuing his policies for America over the next four years. America should hear more from her.