Evangelist Compares Republicans Who Voted For Trump’s Impeachment To Judas 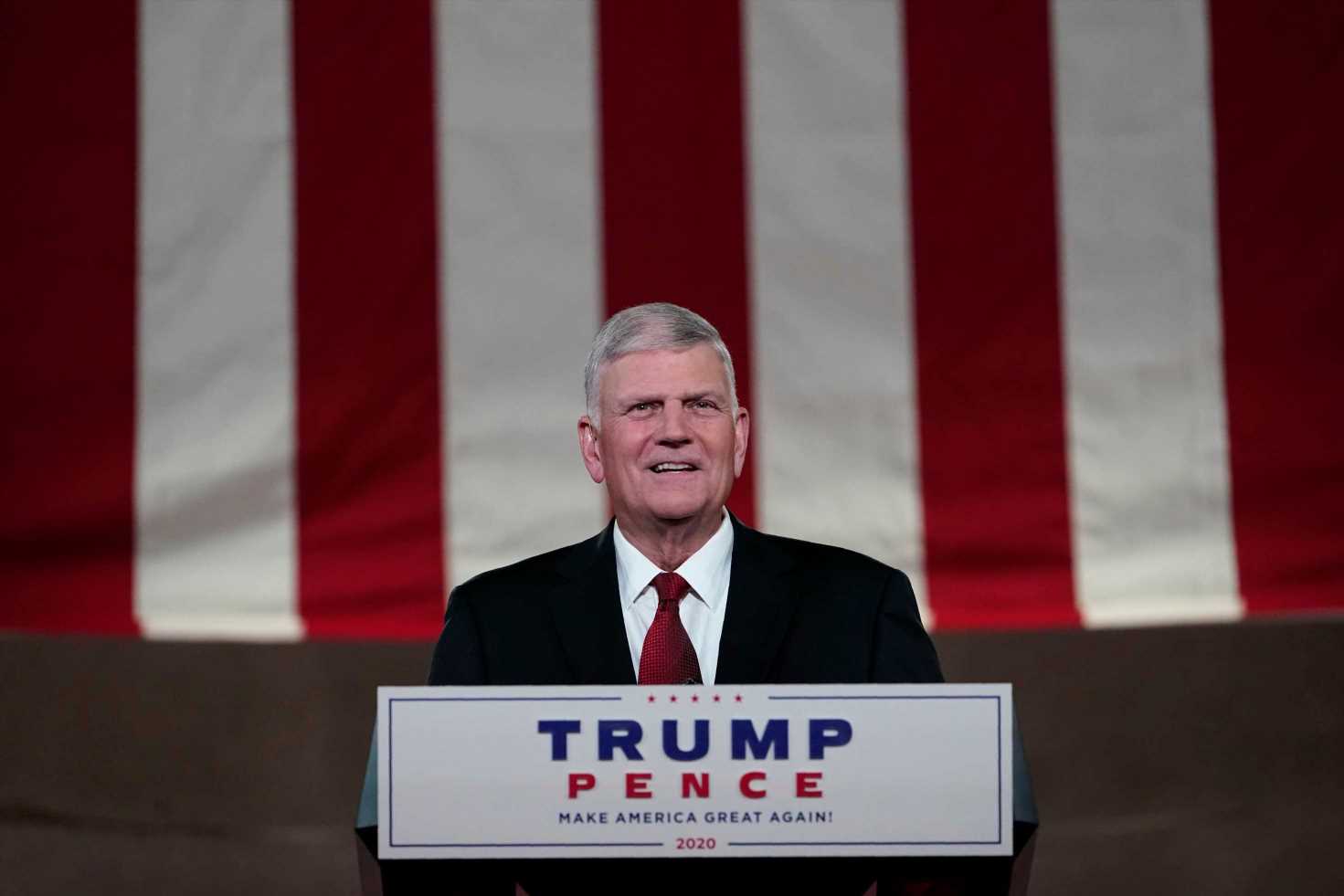 Franklin Graham, son of the late American evangelist Billy Graham, has supported Donald Trump through some of the most controversial moments of his presidency.

This week, Graham proved that Trump could incite a mob of hundreds to storm the U.S. Capitol in protest of the results of a presidential election and still not lose Graham’s support.

In a Facebook post, Graham compared the 10 Republican House members who voted for Trump’s impeachment on Wednesday to Judas Iscariot, the apostle notorious for betraying Jesus for 30 pieces of silver.

“Shame, shame,” Graham wrote Thursday. “After all that he has done for our country, you would turn your back and betray him so quickly?”

“It makes you wonder what the thirty pieces of silver were that Speaker Pelosi promised for this betrayal,” he added, referring to the Democratic House leader. 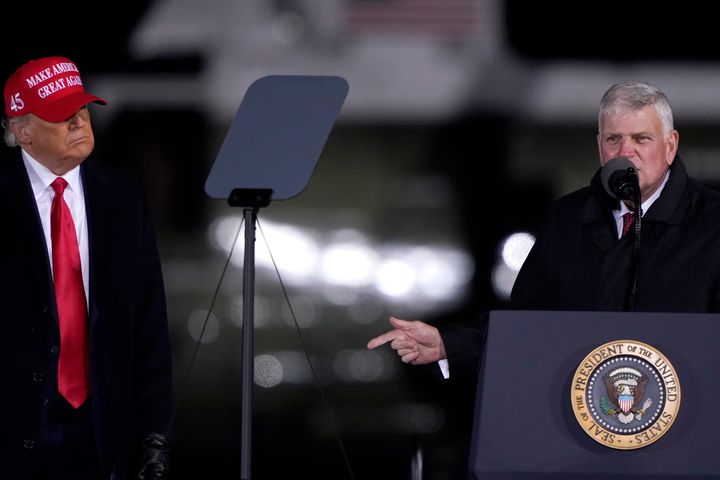 Biblical accounts suggest that Judas, one of the Twelve Apostles, disclosed Jesus’s location and identity to those who sought his arrest, setting in motion a chain of events that eventually led to Jesus’s crucifixion. This act of disloyalty from a member of Jesus’s inner circle has made Judas’s name shorthand for a traitor.

The House voted 232-197 on Wednesday to impeach Trump for his role in inciting last week’s deadly insurrection at the Capitol, making him the first U.S. officeholder to be impeached twice. The 10 politicians who crossed the aisle for the vote included Reps. Liz Cheney of Wyoming, the third-ranking House Republican.

House Democrats impeached the president “because they hate him and want to do as much damage as they can,” Graham said. The evangelist accused the 10 Republicans who sided with the Democrats of joining in “the feeding frenzy.”

Graham admitted that “January 6 was a low point in [Trump’s] presidency.” But Trump was never a “perfect person,” he said.

“I don’t support or agree with some of the things the President said and did the last couple of weeks,” Graham wrote. “But I, and millions of others, voted for him because of the platform and policies he promised. I still support those.”

Graham referred to a long list of the ways the president has championed the causes that are priorities for white evangelical Christians and Republicans (two groups that have considerable overlap). 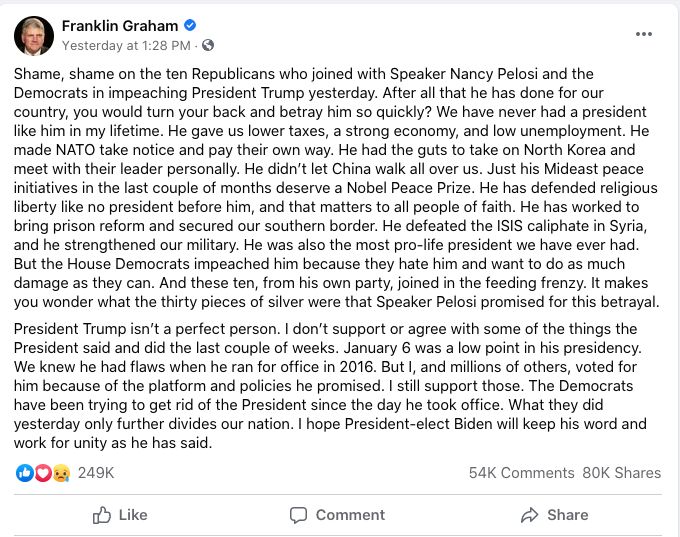 Studies have shown that the policy priorities of white evangelicals tend to differ significantly from those of Black and Hispanic Protestants, as well as non-Christians and the religiously unaffiliated.

Graham is the president and CEO of the Billy Graham Evangelistic Association and Samaritan’s Purse, a Christian relief organization. Over the past four years, he has been one of Trump’s most loyal, high-profile evangelical supporters. He’s criticized Trump very rarely and defended him staunchly through numerous controversies ― from the president’s 2017 travel bans to his aggressively obtained photo-op with a Bible during anti-racism protests last June in the wake of the police killing of George Floyd. 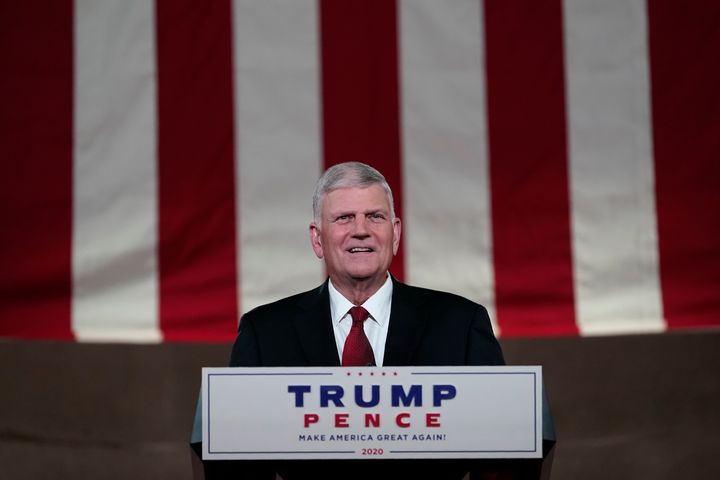 In the weeks leading up to Congress’s certification of President-elect Joe Biden’s win, Graham joined many of Trump’s close evangelical allies in publicly expressing doubt about the election results. He continued to do so on Jan. 6, a few hours before the riot, which led to the deaths of five people.

That evening, Graham tweeted that he was “deeply saddened” by what had happened at the Capitol. He later tweeted that “both parties bear responsibility for the problems we face today.”

Not all members of American evangelicalism’s royal family are on board with Graham’s unwavering loyalty to Trump. Jerushah Duford, Billy Graham’s granddaughter, is an outspoken critic of the president ― slamming evangelical leaders, including her uncle, for ignoring the ways Trump’s policies have contradicted core Christian tenets.

Her tweets since the insurrection suggest she believes repentance should come before calls for unity.

Responding to Graham’s tweet about “both” sides bearing responsibility, Duford tweeted, “My prayer is that my anger turns [to] compassion for those who are trapped by their own ‘rightness’ [and] that when I am proven wrong (which will happen daily) I have the humility to profess it.”