Insiders say Canberra has only received 300,000 AstraZeneca and does not hold out much hope for another shipment of 400,000 due by the end of April. An Australian government source said: “They’ve blocked 3.1 million shots so far. “We haven’t given up hope but we’ve stopped counting them in our expected supplies.”

They told the Reuters news agency that the blocked exports are likely to impact Australia’s vaccination drive which is already 83 percent behind schedule.

Their claim comes after Brussels unveiled plans to crackdown on shipments of European-made made coronavirus shots being shipped abroad.

The European Commission has powers to stop exports to countries with better vaccination rates than EU member states. 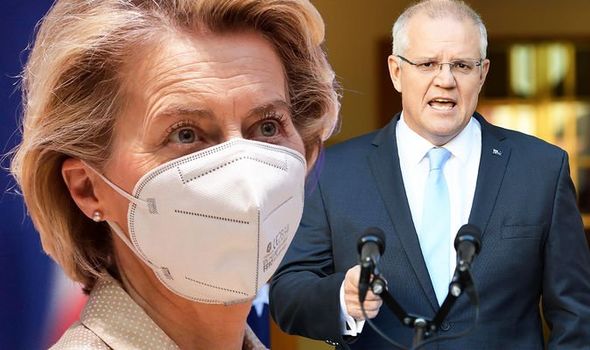 The EU executive disputed the claims that it had blocked 3.1 million jabs from being sent to Australia.

An EU official said the bloc had only seized one shipment, of 250,000 AstraZeneca shots, from Italy to Canberra earlier this year.