Democrats Had 17 Young Stars. The DNC Didn’t Give Them Any Chance To Shine.

The keynote speech at the Democratic National Convention has traditionally been a moment when the Democratic Party gives one of its younger elected officials the opportunity to showcase their talent before a national audience.

The most famous such speech in recent memory was by then-Illinois Senate candidate Barack Obama in 2004. Obama’s declaration that “there is not a liberal America and a conservative America — there is the United States of America” launched him into the political stratosphere, laying the groundwork for his successful 2008 run for president.

More recent speeches have not had the same impact, but they have still given rising Democratic leaders the chance to make a splash. Then-San Antonio, Texas, Mayor Julián Castro regaled the crowd with his family’s immigration story at the convention in Charlotte, North Carolina, in 2012, and Sen. Elizabeth Warren (D-Mass.) gave Hillary Clinton’s bid a fresh coat of populism in Philadelphia in 2016.

This year, though, in an effort to adjust to the virtual format, Democrats stuffed 17 young elected officials, including members of Congress, state lawmakers and mayors, into a single montage of short sound bites strung together through the magic of video editing. 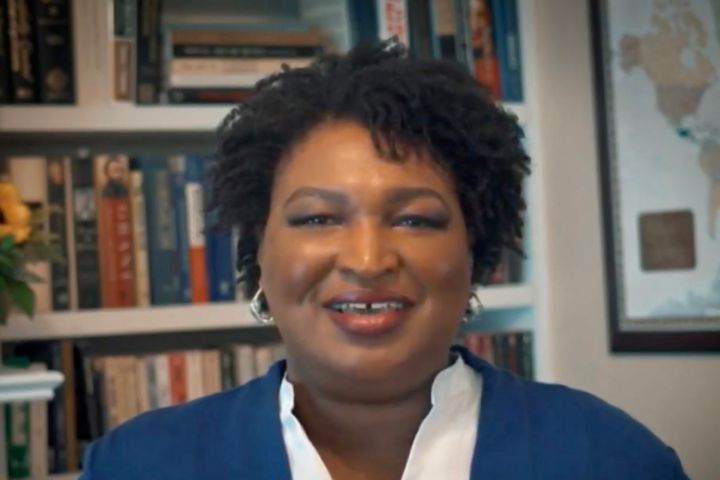 Aside from Abrams, who closed out the segment on her own, no one person got the chance to introduce themselves to a national audience for more than a few seconds, let alone lay out a coherent idea.

Then, the entire ensemble of speakers repeated the line in unison. “That’s a big effing deal.” Get it?

Many of the speakers hail from Biden’s moderate wing of the Democratic Party. It’s not necessarily an unusual choice for a presumptive Democratic presidential nominee who is trying to persuade moderate Republicans and swing-voting independents to back him in November. But given the preference of the younger cohorts in the Democratic electorate for more ambitious progressive policies and candidates, it was a bit dissonant to see so much airtime given to young elected officials who don’t reflect their views.

Abrams had a chance to speak on her own, which made for easier viewing. She handled the opportunity with aplomb precisely because her voting rights advocacy and near-win in the 2018 Georgia gubernatorial race have already made her a nationally known figure.

“America faces a triple threat: a public health catastrophe, an economic collapse and a reckoning with racial justice and inequality,” Abrams said. “So our choice is clear: a steady, experienced public servant who can lead us out of this crisis just like he’s done before, or a man who only knows how to deny and distract; a leader who cares about our families, or a president who only cares about himself.”