WASHINGTON ― With President Donald Trump’s recent admission that he’s sabotaging the U.S. Postal Service in order to hamper mail-in voting, House Democrats are headed back to the Capitol later this week to vote on a bill protecting the USPS. But beyond messaging bills, emergency hearings and stern statements, Democrats may not have many tools to stop Trump.

The biggest and most drastic strategy ― impeachment ― is an unlikely remedy, given that Election Day is only 77 days away and the GOP-held Senate, once again, will almost certainly let Trump do whatever he wants.

But Congress’ best tool ― the power of the purse ― is also complicated.

At issue is the cash-strapped Postal Service, which needs more government funding to sustain itself. But Trump doesn’t want to bail out the agency. He believes a functioning Postal Service would help Democrats win via mail-in ballots in November.

“They need that money in order to have the post office work,” Trump said last week on Fox Business, “so it can take all of these millions and millions of ballots.”

Trump is openly admitting he’s opposed to adequately funding the Postal Service because he wants to undermine voting by mail, which he believes helps Democrats.

It’s a case of open corruption: Incapacitating a government service to serve Trump’s electoral goals, while also constricting the ability of people to get medicine and other important mail.

Typically, the president’s thoughts on the Postal Service wouldn’t matter much. It’s Congress, after all, that funds the agency. The president simply signs the funding bill ― or vetoes it and risks Congress overruling him.

But with such a short amount of time before the election, and such a dire funding situation at the Postal Service, Trump’s intransigence is more powerful than ever.

Democrats have already pushed for more Postal Service funding. There was $25 billion in the $3.5 trillion bill that House Democrats passed in May, but that legislation hasn’t gone anywhere since. And even with the coronavirus ― and the economic fallout from it ― still raging in the United States, Republicans have remained largely opposed to another stimulus bill.

Without a deal as a vehicle for a Postal Service bailout, the next must-pass legislation that Democrats could attach USPS funding to would be a bill to keep the government funded past Sept. 30. Without a continuing resolution, the government would shut down just a month before the election, and Democrats and Republicans both seem intent on avoiding that situation ― at least at the moment.

Even if Democrats get a deal saving the Postal Service, and even if they attach policy riders to such a bill stating that this money has to go toward ensuring the ability of the agency to handle mail-in ballots, Trump’s postmaster general, Louis DeJoy, would still have a great deal of power over implementing those laws. With so little time between the government funding deadline and the election, it wouldn’t take much for DeJoy to play games to skirt the law — which he’s already proved himself willing to do.

Which is why Democrats suddenly find themselves in a serious position. 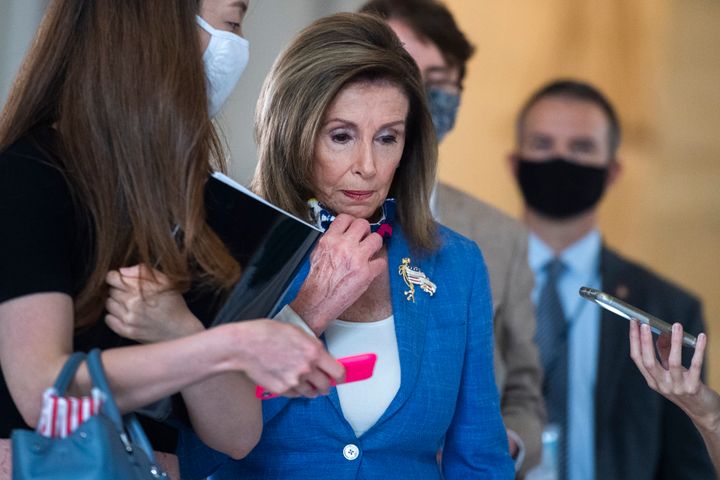 Speaker Nancy Pelosi (D-Calif.) announced over the weekend that she would bring the House back from its August recess this Saturday to vote on legislation providing the USPS with $25 billion and blocking organizational changes that could help Trump fulfill his goal of undermining mail-in ballots.

Democrats are also calling on DeJoy to testify nearly a month earlier than previously scheduled, which DeJoy agreed to do. He will now testify before the House Oversight and Reform Committee on Aug. 24 and the Senate Homeland and Governmental Affairs Committee on Aug. 21.

There are even some Democrats calling on the FBI to investigate whether DeJoy has already broken the law.

But again, beyond that, there isn’t much Democrats can actually do. Senate Majority Leader Mitch McConnell (R-Ky.) is unlikely to take up a standalone bill protecting the Postal Service. So Democrats are left with just taking the case to the American people.

“There has been a lot of focus on congressional action, deservedly,” a Democratic aide told HuffPost. “But don’t underrate the value of the public backlash.”

This aide pointed out that the public pressure had already gotten some results. For instance, Trump has expressed some openness to allowing USPS funding to pass, and White House chief of staff Mark Meadows said Sunday that the administration would support $10 billion for the Postal Service in a coronavirus deal.

Any deal on coronavirus economic relief, however, remains far off. Meadows told reporters aboard Air Force One on Monday that he hadn’t spoken to Pelosi or Senate Minority Leader Chuck Schumer (D-N.Y.) “in over a week.”

A handful of Republicans, particularly those representing heavily rural states and facing difficult reelection campaigns, have responded to the public backlash to voice displeasure with Trump and DeJoy’s actions.

Sen. Joe Manchin (D-W.Va.), perhaps the most moderate Democrat in the Senate, also seized on the issue last weekend, touring a USPS distribution center and repeatedly tweeting about the removal of processing machinery in West Virginia.

An aide for the House Oversight Committee, which is generating the Democrats’ Postal Service legislation, told HuffPost that the bill already has some GOP support. “Significantly, even Republican members of Congress, state officials and local representatives have joined in expressing their opposition to these drastic changes that are severely affecting our constituents, including veterans, small businesses and families in rural areas,” this aide said.

With Congress’ ability to protect the Postal Service limited, the last line of defense will fall to the states. State governments could change their laws to get around the Trump administration’s purposeful postal delays by accepting absentee ballots postmarked by Election Day but received afterwards. Nineteen states already accept ballots received anywhere from three to 10 days later.

But without McConnell’s assent to funding legislation, protecting the USPS is an uphill battle. And another Democratic aide gave a reality check about the bipartisan nature of saving the Postal Service.

“House and Senate Republicans seem content once again with just watching the world burn,” the aide said. “This is them doing everything they can to intentionally break an entire agency so they can point at it and feign outrage and tell the American people that ‘government isn’t working.’”

They added that the nation happens to find itself in a moment when this one agency might have the entire election hinging on it. “So they have added incentive to fuck it up as best they can,” the aide said.